The Auburn City Council is set to consider a trio of land agreements Thursday, including the proposed sale of the long-vacant Dunn & McCarthy site and the purchase of land for a new public safety building.

The council is set to review resolutions to authorize the sale of the Dunn & McCarthy site to a Syracuse-based health care provider, the purchase of a parcel to serve as the Auburn Fire Department's new home, and a lease agreement for a solar array atop the city's old landfill.

The current joint headquarters for the Auburn Fire and Police departments at 23 Market St. no longer meets the requirements of either departments, city officials have said.

To replace it, a resolution before the council would purchase the property at 31 Seminary St. in order to turn it into a new space for the fire department — freeing up space at the current structure for both police and City Court, which has also outgrown its space at the Historic Post Office, as part of a second phase of the project.

In 2016, the city received a $2 million state grant for the project, and another $1.2 million for the project as part of the Downtown Revitalization Initiative this year.

The resolution authorizes the city to purchase the property from Seminary Commons, LLC for $990,000, while city Director of Capital Improvement Program and Grants Christina Selvek has said the overall cost of the entire project is estimated as $10 million.

According to the memo for the resolution, the location was chosen because of its central location, making it ideal for emergency response times. The parcel currently houses a laundromat and rent-to-own store, which City Manager Jeff Dygert said would have their leases honored until construction.

The council will also have an opportunity to once again weigh in on a resolution tabled earlier in August, should it decide to.

At the council's Aug. 8 meeting, Helio Health, a health care clinic based in Syracuse that focuses on substance use and mental health disorders, pitched councilors on a proposal to turn 41-55 Washington St. — the site of the former Dunn & McCarthy shoe factory — into an affordable housing complex, complete with services for tenants.

At the Aug. 15 meeting, the council voted to table the sale after Councilor Jimmy Giannettino Jr. said he was concerned Helio's project would intrude on the work of smaller, local groups involved in recovery and housing.

"I appreciate the fact that they want to create a presence here, I just want to make sure it's a presence that fits in with current efforts," Giannettino said at the time.

Several such community organizations had contacted Giannettino with questions regarding Helio's project, he said, and tabling the resolution would afford time for all the parties to meet and work on a way forward.

The resolution would sell 3.5 of the seven acres at the site to Helio for $130,000, with the condition that the land be developed within four years of the execution of the purchase offer.

On Wednesday, Giannettino told The Citizen that City Manager Jeff Dygert would be discussing the project in his report.

The council is also set to vote on a lease agreement to allow Abundant Solar Power to develop a 7 Megawatt-hour solar array on top of 36 acres of city-owned land at the old landfill number one off North Division Street.

If the city and the developer agree to either of two five-year extensions provided by the agreement, the annual rent would be $99,000 for each subsequent year. The agreement also includes a $56,876 security deposit from the developer and a removal bond for the site's decommissioning.

When presented at the city's Aug. 22 meeting, councilors voiced support for the agreement, particularly the fact that it minimized risk to the city.

The council is scheduled to meet at 6 p.m. Thursday at City Hall, resuming regular hours after meeting at 5 p.m. during the summer.

For over two decades, an empty, city-owned lot on Washington Street in Auburn has been on the market. Now, after a health care clinic has expr…

Our view: Leasing space at old landfill in Auburn appears to be a winning plan

It appears that Auburn has a good deal in place to lease closed landfill space to a company that wants to put solar panels there. In the absen…

The Auburn City Council is set to vote Thursday on a resolution to purchase the parcel at 31 Seminary St. to convert into a new headquarters for the Auburn Fire Department, along with two other land deal resolutions. 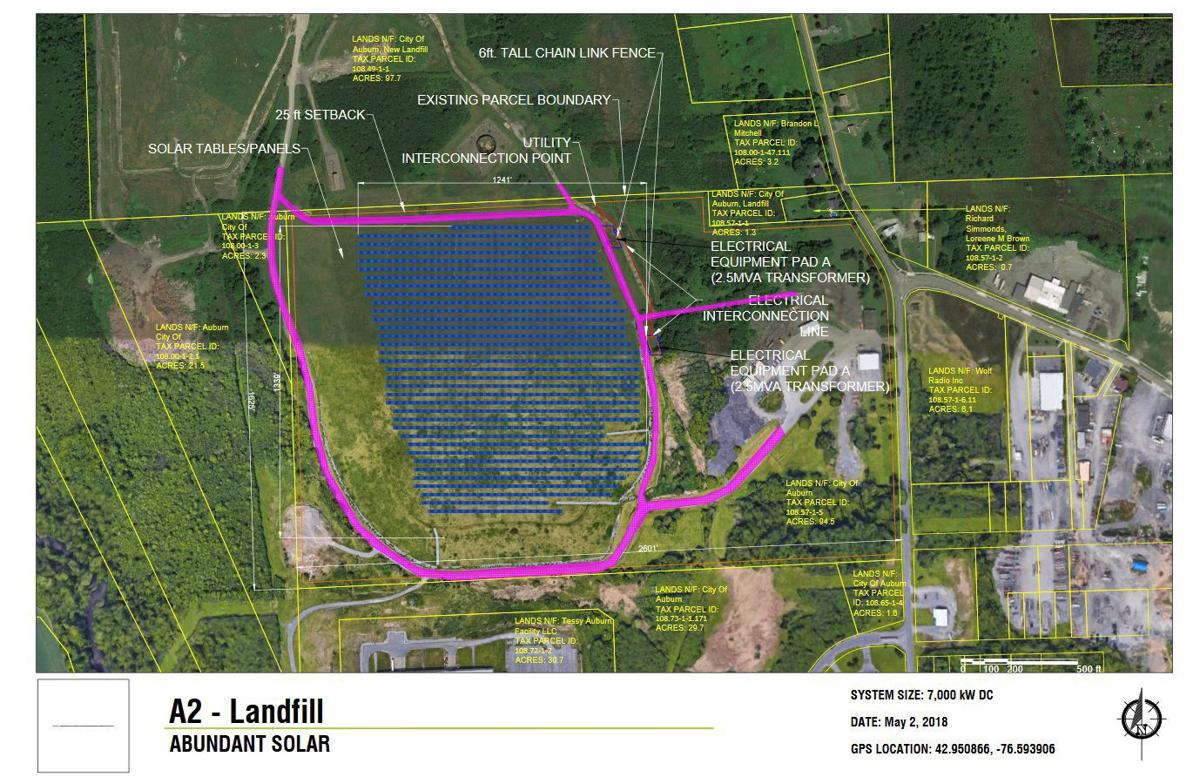 A conceptual design of a proposed solar array that could be constructed on City of Auburn-owned land.

The former site of Dunn & McCarthy in June.