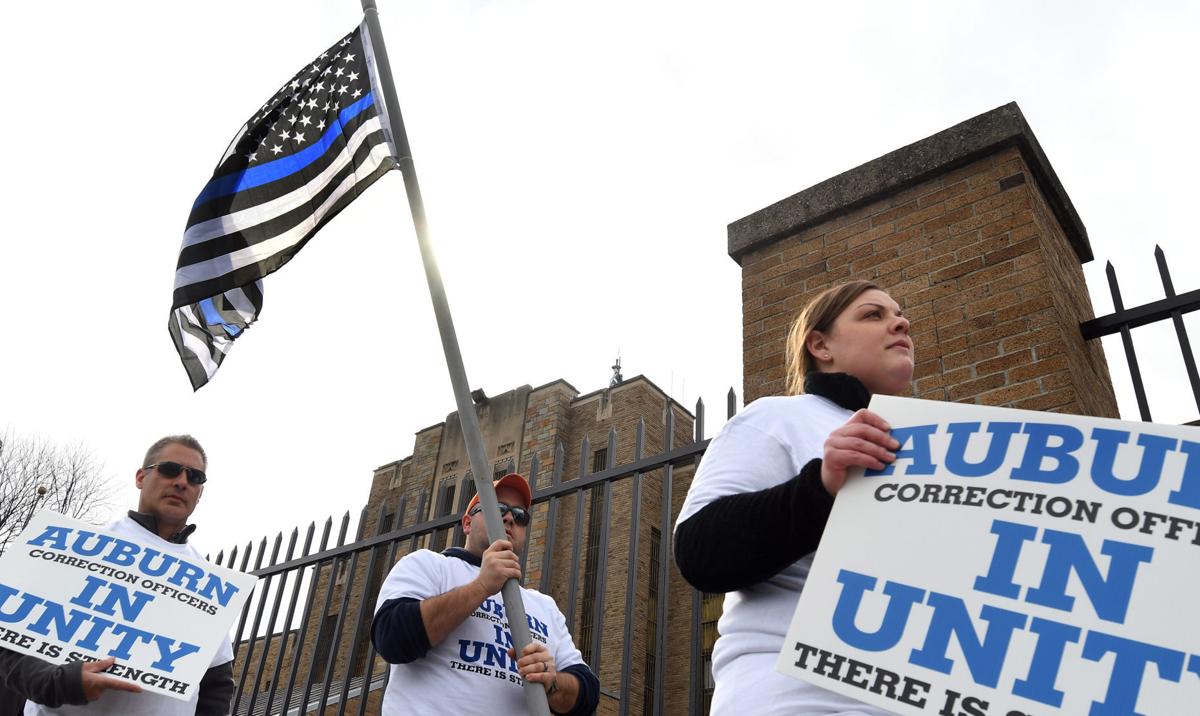 Corrections officers from Auburn and other state correctional facilities picket in front of Auburn Correctional Facility to emphasize employee safety and their frustration with prison administration. 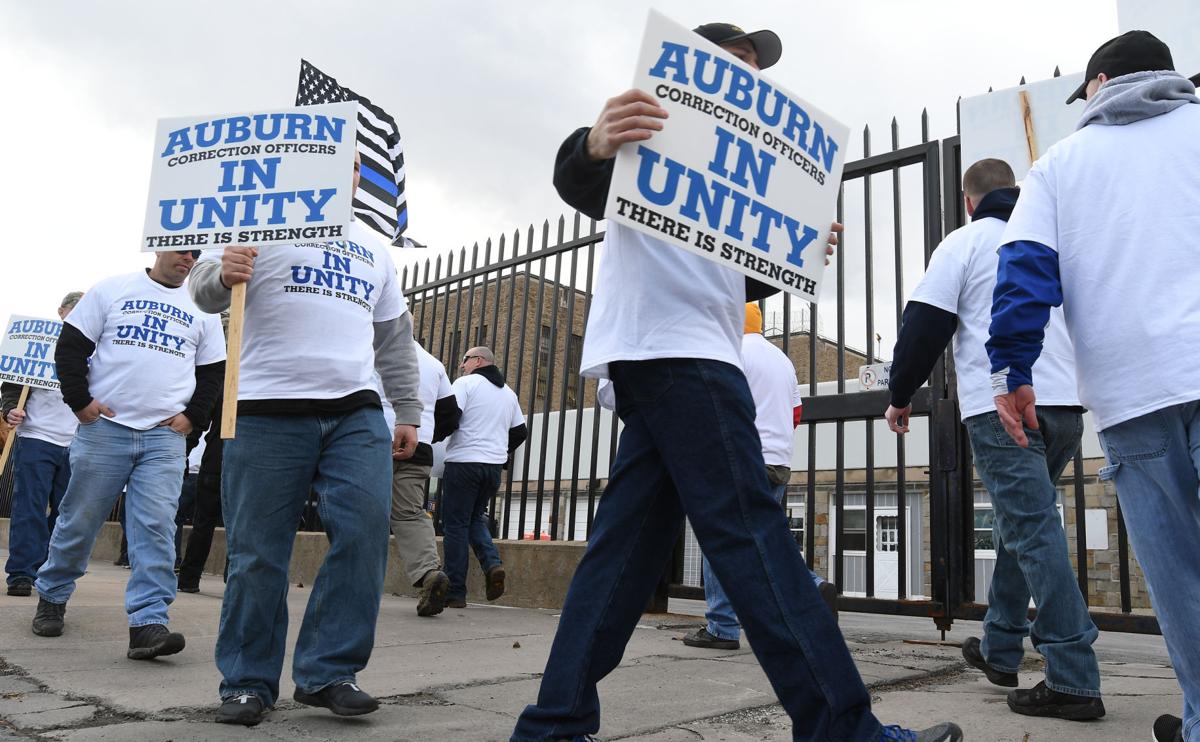 Corrections officers from Auburn and other state facilities picket to emphasize frustration with prison administration. 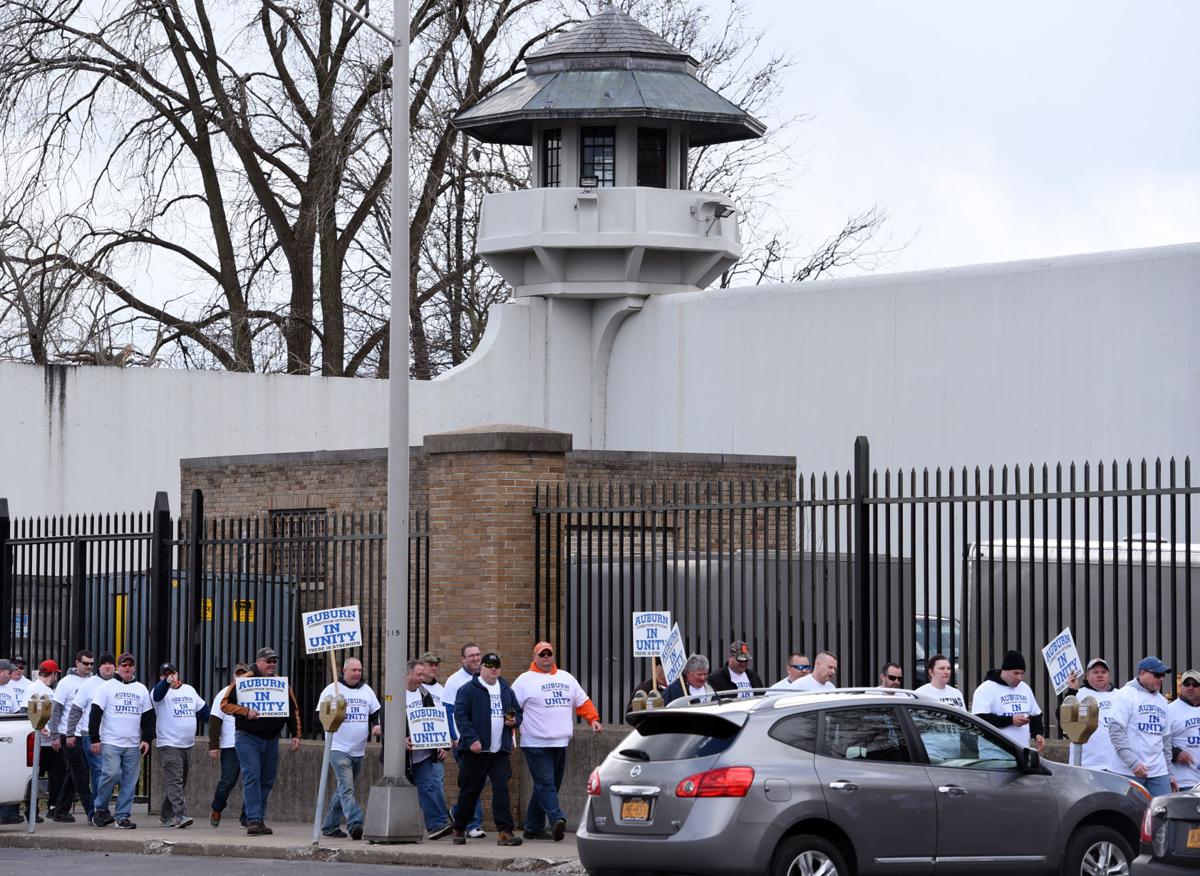 Michael Powers, the president of the New York State Correctional Officers & Police Benevolent Association, was one of several NYSCOPBA members who met officers at Auburn prison to send a message to the governor and the Department of Corrections and Community Supervision.

"We're here for a unity picket to show our administrations that we're not getting the true recognition that we deserve," Powers said. "A lot of changes are coming and catering toward the pampering of the inmate population. ... It's very difficult for our guys to do our job ... when we are constantly dealing with lawsuits from advocacy groups that truly don't know what's happening inside these walls and fences at our facilities."

What's happening is a significant rise in gang violence and inmate assaults — both on prison staff and other inmates — as well as an increase in dangerous drugs and contraband. According to NYSCOPBA, assaults on staff jumped nearly 60 percent in the last five years, something the association believes is due to a decrease in discipline.

"There have been changes in the inmate disciplinary system in which they've actually weakened and watered down the punishment that inmates get," said Joe Miano, Western Region Vice President for NYSCOPBA. "Now inmates know they can get away with stuff. They can assault somebody and they know they'll get a limited time in a disciplinary unit. So the punishment is not what it used to be."

The picket came one day after Gov. Andrew Cuomo called on the Senate to raise the age for criminal responsibility in New York, one of two states in the nation that charges 16- and 17-year-olds as adults.

"This unfair practice places some of our youngest New Yorkers in a prison system where they are more likely to be assaulted, to be injured by prison staff, and to commit suicide than their peers processed as juveniles," Cuomo said in a press release Tuesday.

In addition, DOCCS spokesman Thomas Mailey said the department has "made significant improvements" to enhance the safety and security of staff and inmates, including additional training, de-escalation tactics and a pepper spray program.

In response, NYSCOPBA said the governor's statement falsely accused officers of abusing inmates and served as another example of why officers continue to unite for prison staff security.

"This is a prime example of why NYSCOPBA has led the fight for more staffing, new equipment and technology, and training opportunities to ensure the safety of those who live and work in our prisons," the association said in a press release Wednesday.

"When we deal with our administrations, our concerns are going unheard," Powers added. "That's never more evident than it is here at Auburn. ... But we stand behind our members and the job that they do, now and always."

A union representing the state's corrections officers slammed Gov. Andrew Cuomo for his comments Tuesday about a proposal to raise the age of …

Corrections officers from Auburn and other state correctional facilities picket in front of Auburn Correctional Facility to emphasize employee safety and their frustration with prison administration.

Corrections officers from Auburn and other state facilities picket to emphasize frustration with prison administration.