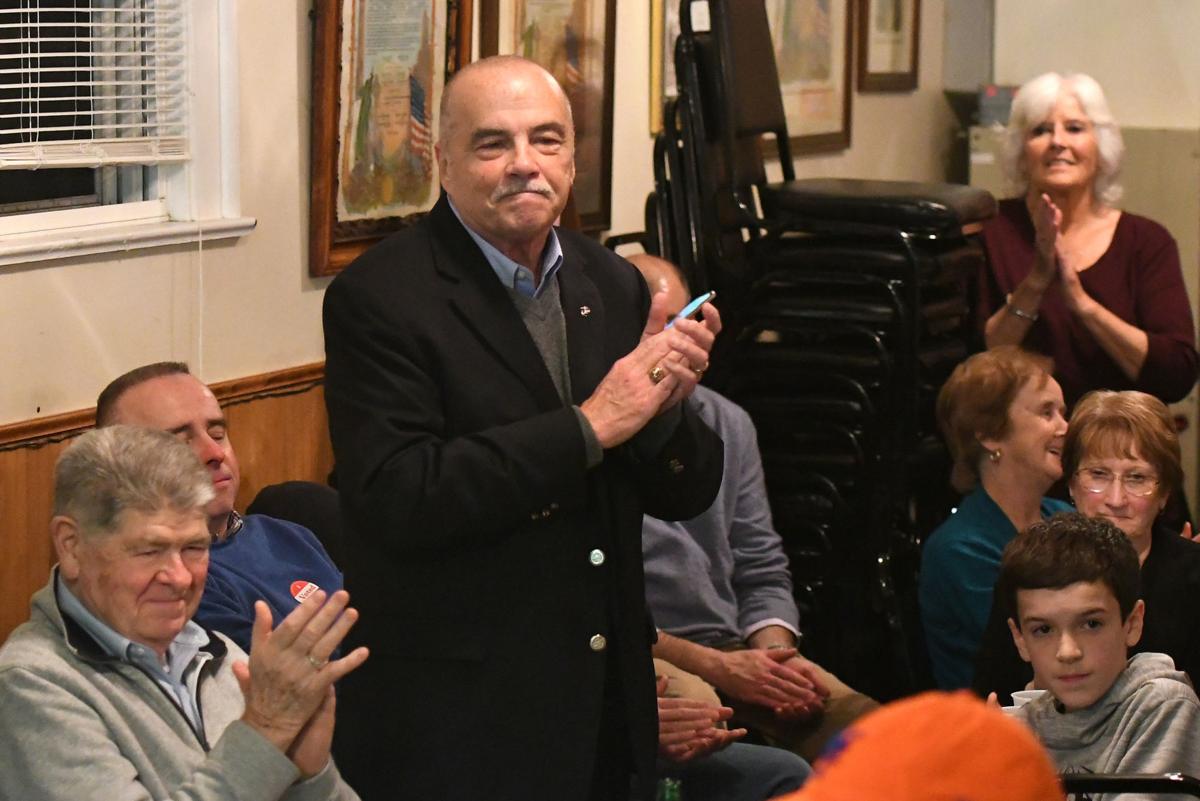 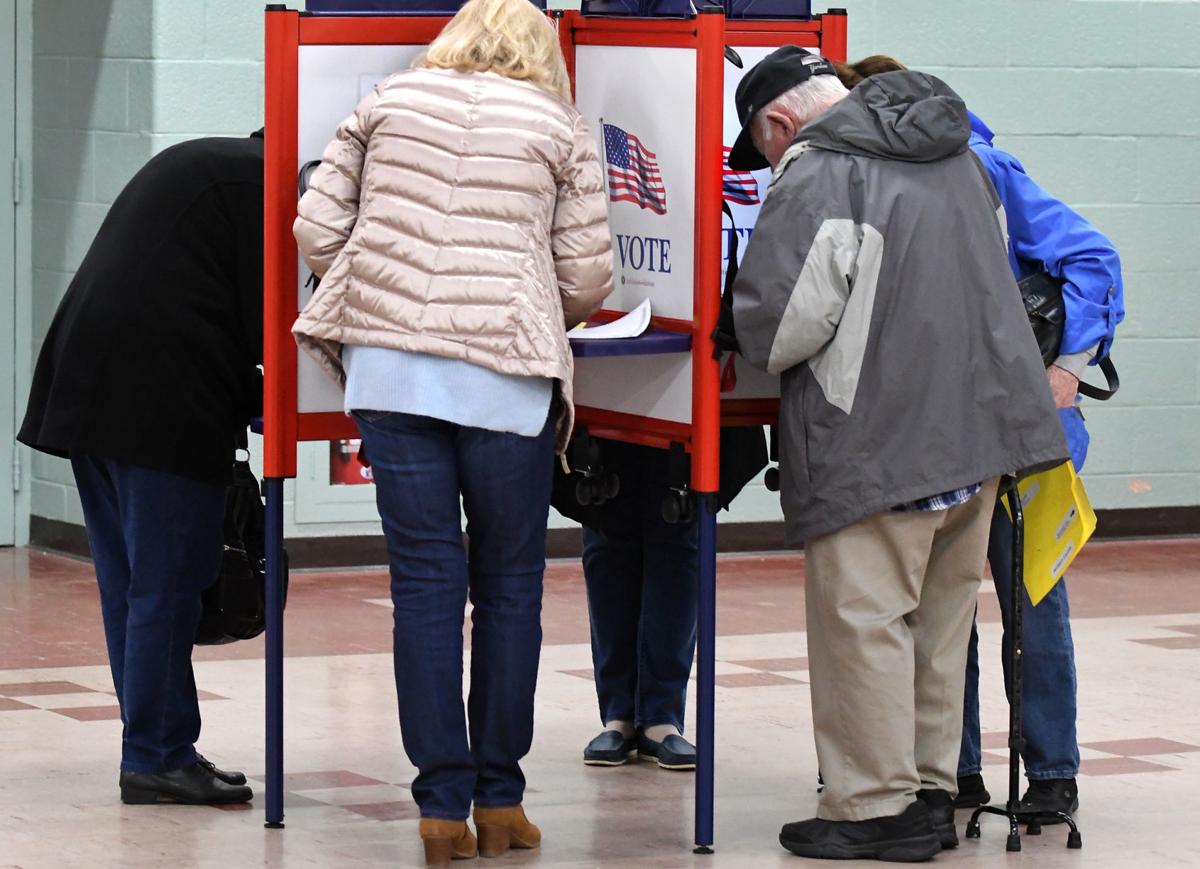 Voters cast their ballots at Sacred Heart Church polling place in Owasco during the general election.

Quill secured his fourth term as mayor by taking 3,108 votes to repeat-challenger and former mayor Timothy Lattimore's 2,373 and newcomer Brett Tracy's 155, according to the Cayuga County Board of Elections.

At the Cayuga County Democratic Committee watch party at Auburn's Ancient Order of Hibernians, Quill said the theme of both his tenure as mayor and his campaign was teamwork.

"Everything revolves around teamwork, and that was demonstrated this year," Quill said.

Incumbents Giannettino and Carabajal, running on the Democrat and Working Families ballot lines, were both seeking their second terms on the council.

They were challenged in their bids by Adam Miller and Timothy Locastro, both on the Republican, Conservative and Independence lines, and Libertarian Justin Burchard.

At a watch party at A.T. Walley & Co., Locastro praised the people on his campaign when the early results came in.

"My people worked hard and they went out there and it paid off, hopefully," Locastro said. "There's still a long way to go, there's still a lot of absentee votes out there. Win, lose or draw, I'm going back to work tomorrow."

Carabajal similarly thanked everyone who helped on her campaign, and said she was still expecting to pull out a victory when absentee ballots are counted next week.

"I can look out here and see lots of people who have had their hands on my back while this has happened. For that, I am so grateful," Carabajal said.

According to the board of elections, there were 437 absentee ballots issued this election, with 296 turned in so far. The board will continue to accept absentee ballots that were post-marked by Tuesday until next Wednesday.

Lattimore, who was running his fourth rematch against Quill, said he loves the city of Auburn and was glad to see a fellow Republican get onto the council at least.

Political newcomer Tracy ran a campaign in which he promised to serve as a voice for residents, who he said were going unheard by the existing administration.

The central issue that arose in both the mayoral and council races could be boiled down to whether or not residents were happy with the way the city has been run for the past several election cycles.

In debates, billboards and speeches, the incumbents made their pitch to stay with the shared slogan of “steady leadership making progress for Auburn.” Carabajal, Giannettino and Quill each touted the city's work in cleaning up neighborhoods, protecting the city's drinking water, and revitalizing downtown.

A significant reason behind the success of those projects, the incumbents said, was due to the council's positive relationships with the state and their effective advocacy that had helped to secure state support in forms like the $10 million Downtown Revitalization Initiative or the filtration system to protect water from harmful algal blooms.

Many of the same projects the city received state support for, however, were the focus of criticisms from the council challengers, and became something of a common theme among several of their campaigns. Miller, Locastro and Burchard were all critical of the city's acceptance of certain state mandates as stipulations for receiving funding.

The city, the challengers said, had ignored residents' concerns on such projects — the implementation of back-in parking and the location of the Equal Rights Heritage Center in particular — and promised they would more keenly listen to constituents if elected.

Locastro said he'd continue the campaigning practice of going door-to-door; Burchard described himself as the candidate that listens; and Miller said he would follow the agenda of voters rather than any of his own.

The mayoral race struck a similar but slightly different tone, as much of the opponents' platforms focused on jobs and economic development.

Lattimore, who served as mayor from 2004 to 2007, made attracting big industry back to the city a tentpole of his campaign. He said he hoped to utilize the city's closeness to major universities and colleges in order to connect Auburn to burgeoning tech industries, especially the growing drone industry in central new York.

A political newcomer, Tracy pitched his himself as a breath of fresh air for city government, saying his perspective was closer to residents' than his two opponents who both have spent years in public service.

On Tuesday, Tracy said he'd felt good about the race, noting that his opponents had decades more experience than him, and promised to run again in the future.

Voters cast their ballots at Sacred Heart Church polling place in Owasco during the general election.