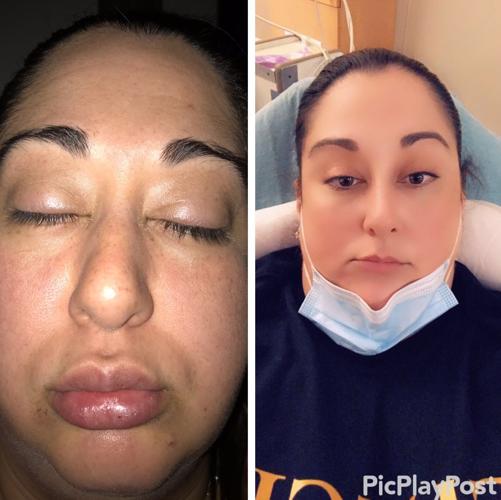 Jessica Knapp, a nurse at Auburn Community Hospital, shared photos of what she looked like after receiving the first dose of the COVID-19 vaccine and the second dose in a controlled environment. 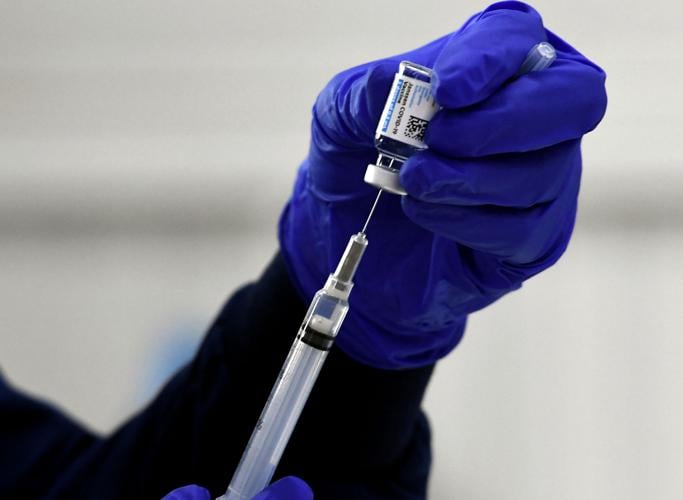 A nurse prepares to administer the Johnson & Johnson COVID-19 vaccine at a Cayuga County Health Department clinic in July.

Jessica Knapp wanted to be fully vaccinated against COVID-19. A severe allergic reaction to her first dose of the vaccine stood in the way of that goal.

Eight months later, she was able to get her second dose. In her case, it was her second, third, fourth, fifth and sixth shots.

Knapp, a registered nurse at Auburn Community Hospital, was the first to be immunized at SUNY Upstate Medical University Hospital's controlled setting vaccination clinic, which opened on Sept. 1 in Syracuse. The clinic was established to help people like Knapp who have allergic reactions to vaccines.

As a health care worker, Knapp was among the first to have access to the COVID-19 vaccine after the Food and Drug Administration authorized it for emergency use in December. She received her first dose of the Moderna vaccine on Jan. 5. Shortly after the injection, her eyelids and lips were swollen.

Because of the allergic reaction to the first dose, Knapp explored how to safely get her second dose to be fully vaccinated. Usually, second doses of the Moderna vaccines are administered a few weeks after the first.

She consulted with her primary care physician and neurologist — she has multiple sclerosis — and was referred to Dr. John Cosachov, an allergist-immunologist in Auburn.

"Working in a hospital, being an RN, being a mom, being immunocompromised with MS, it was very important to me to get that second dose," Knapp said.

Cosachov told The Citizen that the state Department of Health contacted allergist-immunologists to seek volunteers to see patients who had allergic reactions to the COVID-19 vaccines or had concerns about possible reactions to other medications and other vaccinations.

After the vaccine was rolled out in December, Cosachov read reports of people having severe allergic reactions to the vaccine. He recalls that the initial recommendation was that people with allergies should consider not getting the vaccine.

Cosachov informed the health department that he would volunteer. He believes that he is part of a small group of allergists who are seeing these patients because he's had people come from as far away as Albany and areas west of Auburn.

But that wasn't the only part Cosachov played in helping those with allergic reactions get vaccinated. Sometime in the spring, he read an article in a medical journal about using graded vaccinations for people who experience allergic reactions. The graded vaccination protocol, he explained, involves diluting the vaccine and administering it in smaller amounts over a period of time instead of giving the person one injection.

Cosachov shared the article with some colleagues. Soon after, Dr. Amy Tucker from SUNY Upstate Medical University contacted him about the possibility of using the graded vaccination protocol.

The university did not respond to The Citizen's requests for comment.

"People can have reactions to the vaccine, but by doing it this way and by doing it in an emergency care setting, people also have immediate treatment available," Cosachov said. "It's easier to manage an allergic reaction if it's treated early on than if you wait a significant amount of time."

At Upstate, the clinic was held in the hospital's pediatric emergency department. Knapp said she arrived at 7 a.m. She was given five injections — three in one arm and two in another — in 15-minute intervals. Her vitals, including her blood pressure, oxygen and pulse, were monitored throughout the process.

Knapp did not have a severe reaction to the shots. After the third injection, she did feel some tingling in her arm, but it resolved on its own.

"Everything went smoothly," she said.

The clinic is not open for walk-ins. You must be referred to the clinic by Cosachov or another allergy specialist working with Upstate. That appointment is important because it allows the allergist to determine if your symptoms are due to an allergic reaction and if you fit the criteria for referral to the controlled setting clinic. There are limited resources available for the clinic, he said, because of the time it takes to administer the doses and observe the patients in an emergency care center.

There are times when it may be difficult to conclude whether an individual had an allergic reaction that would warrant referral to the graded vaccination clinic. In those cases, Cosachov said, you to defer to how to best get the patient the vaccine.

"A graded challenge might be the right way to do it," he said. "It would certainly be the safest way."

For Knapp, safety was the priority. She wanted to be fully vaccinated. Even after her reaction to the initial shot, she urged her co-workers at Auburn hospital to get inoculated. She did not want her experience to discourage them from getting the vaccine.

With the clinic at Upstate, she thinks it can help people who, like her, have allergic reactions to the vaccines but want to be protected against COVID-19.

"I think it's huge," she said. "I think that it's very important for people to be able to be fully vaccinated, especially people that are immunocompromised or have young kids that can't be vaccinated or people who work in the health care field."

Less than two weeks after receiving her second dose, Knapp is ready for her third. The federal government is working on a plan to roll out booster shots for millions of fully vaccinated Americans. Early plans call for third doses to be administered eight months after the second.

When her time comes, Knapp says she will get her booster.

A movie was filmed in Port Byron this week, and it possibly involved a popular star who's been spotted in the central New York area recently.

Two state agency commissioners traveled to central New York on Thursday to present a Skaneateles farm with a prestigious award.

AUBURN — The Auburn Enlarged City School District Board of Education approved a change to a policy regarding public complaints, specifying it …

A Throop man will be spending the next four to 12 years in state prison for causing a motor vehicle crash that killed a Weedsport man.

A second arrest has been made in an ongoing investigation into the theft of snowmobiles and other property in Cayuga County.

'Happy to get out': People enjoy normalcy at Founders Day festival in Auburn

OWASCO — Another Great Race is in the books, but this one comes with a little extra satisfaction.

Check out these 'elephant canteens' where elephants and people coexist peacefully

Check out these 'elephant canteens' where elephants and people coexist peacefully

Jessica Knapp, a nurse at Auburn Community Hospital, shared photos of what she looked like after receiving the first dose of the COVID-19 vaccine and the second dose in a controlled environment.

A nurse prepares to administer the Johnson & Johnson COVID-19 vaccine at a Cayuga County Health Department clinic in July.