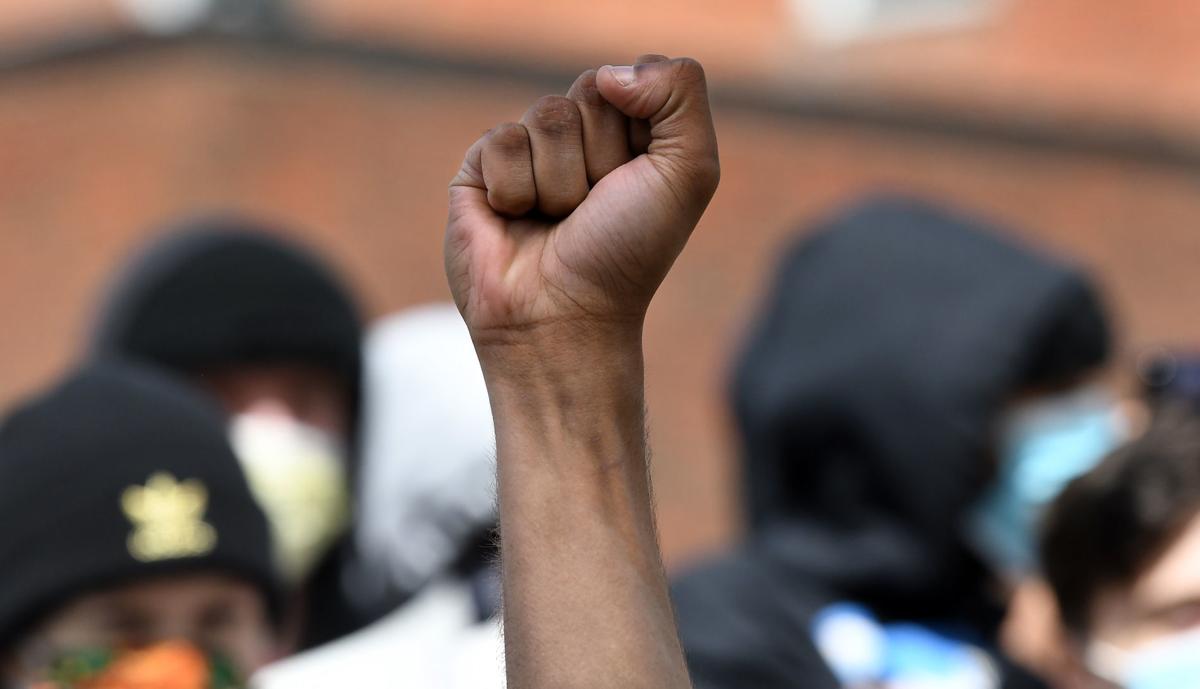 Protesters march in downtown Auburn May 31 to honor George Floyd and speak out against inequality and police brutality. 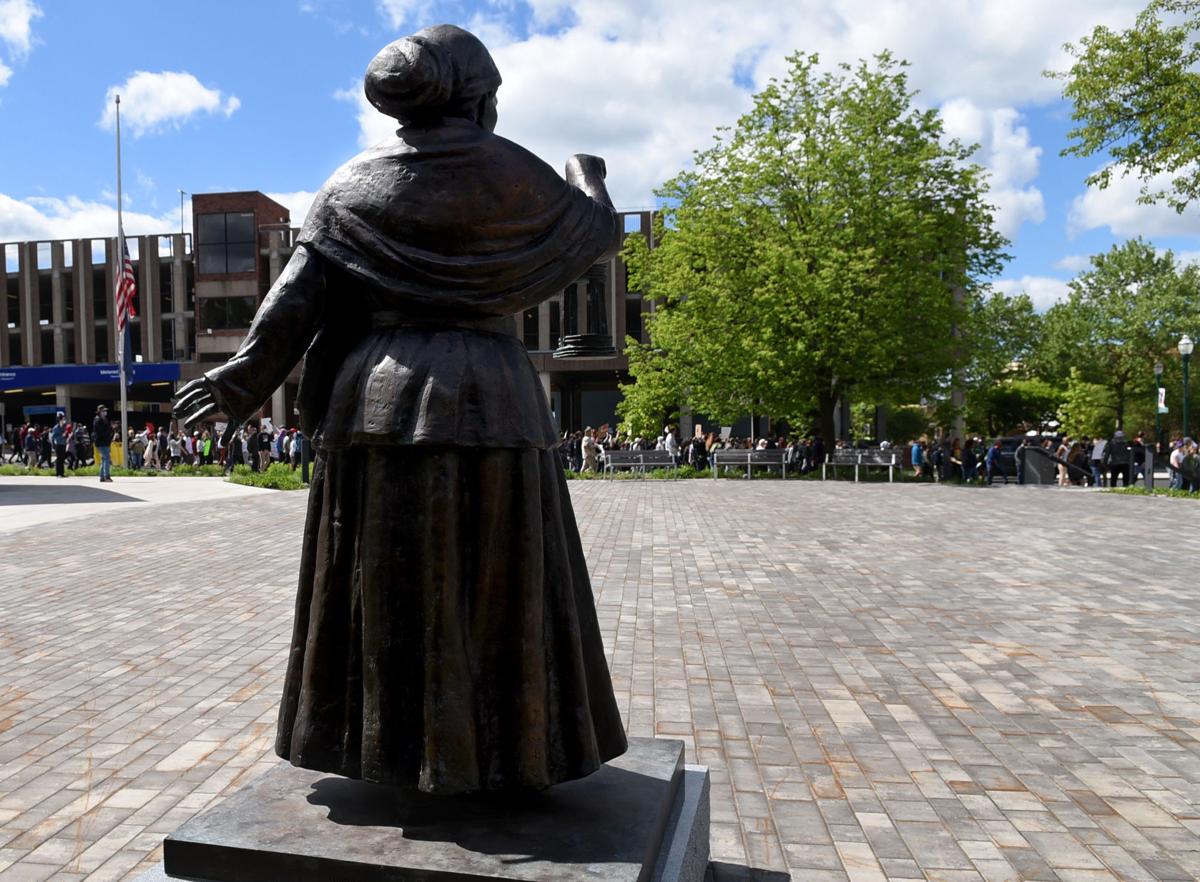 Protesters march past a statue of Harriet Tubman at the Equal Rights Heritage Center in downtown Auburn to honor George Floyd and speak out against inequality and police brutality.

AUBURN — As around 250 protesters made their way down the west-bound lane of Genesee Street Sunday afternoon, they were met with drivers honking in support. And when they turned to head down Washington Avenue, there were greeted with fist bumps as several people came out of their houses to watch them.

Cayuga County residents joined communities across the country by holding a rally and march in Auburn to protest police brutality.

The marches and protests follow the death of 46-year-old George Floyd, a black man who was killed Monday by a Minneapolis police officer. A video of the incident shows former officer Dereck Chauvin kneeling on Floyd's neck for more than eight minutes. Chauvin was later charged with third-degree murder and second-degree manslaughter.

In contrast to recent protests in neighboring cities of Syracuse and Rochester, which resulted in police force, rioting and curfews, Auburn protesters remained peaceful as they united in their outrage at police brutality and racism lasting generations. In fact, police in Auburn marched with the protesters, with an escort vehicle leading the way.

The protest began at 2 p.m. Sunday in the Market Street Park along the Owasco River next to the Auburn Police Department.

Joshua Aaron Geissel, a co-organizer of the protest, anticipated that the speakers were going to make their points heard and raise awareness in the community. He began the demonstration by stating they were there because of Floyd's death in Minneapolis and the ensuing protests.

"I know that's a thousand miles away, but that's our doorstep. That's our country," Geissel said. "Black people want freedom and justice and they want it now."

Geissel and his co-organizer, Kyle Weisman, didn't schedule any speakers ahead of time. One by one, about a dozen people lined up to speak to the crowd using a megaphone. Almost every speaker addressed the recent looting and vandalism emerging amid protests in major cities — and discouraged it.

While he didn't agree with looting businesses, Travis McLeod said he understood the pain behind it. "There's only so many times you can get spit in the face, get punched, get beat, before you do something bad. A man and a woman can only take so much," McLeod said.

McLeod came to the protest with his biracial 2-year-old son. He told the crowd he will have to tell his son the same thing his mother told him in 1989: that he, as a black person, will be perceived with prejudice.

Another guest speaker, Christian Dotts, called for changes in how police interact with people of color in their communities to start "at home," in Auburn. "People with my skin color have been dealing with this since we’ve been born," he said.

He also asked everyone to kneel in honor of Floyd.

APD Chief Shawn Butler, along with other APD officers, and Cayuga County Sheriff Brian Schenck, also joined in, which a few protesters thanked them for. Weisman said he met with the agencies that morning to coordinate where to protest. Butler, Schenck and Depty Chief Roger Anthony also talked with the growing number of protesters Sunday afternoon, prior to the speeches.

A handful of Auburn police officers stood in the back and middle of the crowd. A squad car later blocked traffic in the west-bound lane of Genesee Street, where the main portion of the march occurred.

APD posted a statement to Facebook later that day praising the peaceful event, which they said was in response to "an injustice that has moved this nation."

"Voices were heard, hugs were given, tears were shed, without violence, without property destruction, just compassion and tolerance," the statement read.

Around 4 p.m., after speeches concluded, the crowd marched swiftly down Market Street to Genesee Street chanting "Justice for Floyd" and "No justice, no peace." Once they reached the New York State Equal Rights Heritage Center, where the protest was initially supposed to end, they kept moving toward the Auburn Wegmans.

When asked why people were still walking, Auburn police officers said protesters wanted to keep going. After traveling around Loop Road, they walked farther up Genesee Street and made a right down Washington Street to Arterial East.

Shakila Holley, a Rochester native who currently lives in Auburn, was one of the first people to arrive at the protest. "The riots need to stop but peaceful protesting is OK. I feel everybody as people are just getting tired of it — the racism, just everything. It's just been hard on us as people," she said.

After turning up James Street, the demonstration then returned to the Harriet Tubman Memorial statue in the courtyard of the heritage center. Emotions ran high as protesters debated in the visitor center courtyard whether to continue. "These are our streets!" a woman shouted.

Geissel said they would be allowed to keep walking. Ultimately, no large-scale continuation of the protest continued past 4:30 p.m. Some people held signs up signs along South Street, across from Auburn's Memorial City Hall.

When the attendees all gathered in or around the courtyard, Dotts was addressing them with the megaphone.

"Know your worth! We are in this together until the end!" he shouted.

Coverage from a protest took place in downtown Auburn on Sunday afternoon:

Following a night of protesting that became violent in Syracuse, Onondaga County is now under a state of emergency with a curfew that will go …

BUFFALO — Three law enforcement officers were injured, including one who was run over, Monday night when an SUV with two people with gunshot w…

Quill: We all must fight institutional racism

The past week has been a stressful time for our country and our community. The tragic killing of George Floyd in Minneapolis was just the late…

The membership of the Central New York Association of Chiefs of Police, an organization comprised of law enforcement executives and profession…

Watch Now: The 10 safest cities in the United States

Watch Now: The 10 safest cities in the United States

Watch Now: Most hurricanes spinning over the Atlantic at once

Watch Now: Most hurricanes spinning over the Atlantic at once

Protesters march in downtown Auburn May 31 to honor George Floyd and speak out against inequality and police brutality. 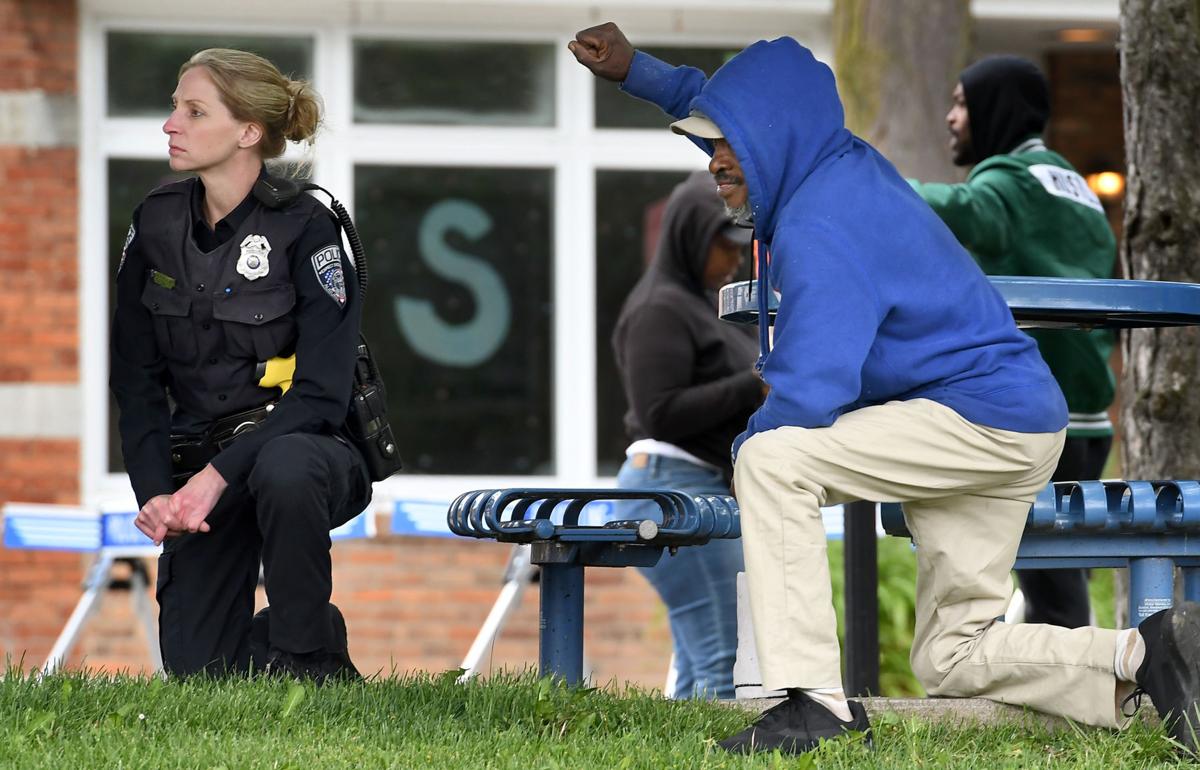 Auburn police officer Beth Guzalak takes a knee with protesters during a march in downtown Auburn Sunday to honor George Floyd and speak out against inequality and police brutality.

Protesters march past a statue of Harriet Tubman at the Equal Rights Heritage Center in downtown Auburn to honor George Floyd and speak out against inequality and police brutality.