Assistant Corporation Counsel Nate Garland presented the plan, mandated by Gov. Andrew Cuomo's executive order on policing last summer, at the council's virtual meeting. The APD and Cayuga County Sheriff's Office have worked with community stakeholders over the past several months to form their respective plans.

Stakeholder subgroups in this process included police structure and training, community relations and crime prevention, and alternatives to police response and procedural justice. Several forums were held to garner feedback from the public.

Garland said he felt good about the plan's current draft, which is available through the city's website. He said transparency is critical, and felt APD Chief Shawn Butler and Deputy Chief Roger Anthony have emphasized that.

"We have the infrastructure and the mindset internally, I think, to that make that happen," Garland said.

The law enforcement agencies also have been working through the state Division of Criminal Justice Services accreditation process, with goals that include improving efficiency, ensuring personnel get proper training and promoting confidence in law enforcement agencies. Garland said accreditation is a way to ensure the public that the department is "functioning under the most modern theories of policy and (gives) a certain amount of bonafides."

For the next steps, Garland said there is a two-week public comment period ending March 11. He will then incorporate those comments into the plan's final draft, set to be presented to council on March 18 for possible adoption. It would then be sent to the state the next day.

The city's website page for the reform plan formation explains how people can offer their opinions during the comment period, which includes a link to the city's online comments page that would let people email the entire council. Written comments can be mailed to the mayor and city council at Memorial City Hall, 24 South St. Auburn, NY 13021. Participants can also submit comments through a dropbox at the front or back entrances of city hall. People are asked to address their comments to the Office of the Mayor and the City Council.

For police structure proposals, the draft plan said the APD supports having body cameras on officers, but an initial investment and continued funding would be required. Preparing and adopting policies on using such cameras and "the retention and disposition of the evidentiary video created by this technology" would also be necessary, the report said.

The APD, which currently doesn't allow choke hold restraints, has updated various polices regarding use of force, according to the plan.

The document said the APD will continue to "use no-knock warrants in narrowly tailored situations with both judicial and internal administrative preclearance to better ensure the safety of officers and the public," but the department's polices on it will change accordingly if state legislation gives further guidance.

The report noted that some members of stakeholder groups and forums commented on recent initiatives from APD and the sheriff's office to boost racial and gender diversity in their agencies through more recruitment and community outreach, and the APD affirmed its commitment to continuing those efforts.

For mental health intervention and response, APD said it has been working with the Cayuga County Mental Health Department and their agency partners. A mental health mobile crisis team is available to work with APD officers from 5 p.m. to midnight, but the team isn't available after midnight. The plan states there is "demonstrated need" to make these services available on a 24/7 basis. APD said it will also work to make support for officers' mental health a normal part of training, supervision and discipline.

The plan calls for making sure law enforcement leaders carry on community outreach efforts, as well. The continuation of the school resource officer program in the Auburn school district is encouraged as part of that. In addition, the plan notes that APD and the sheriff's office "underscored the challenge of current low staffing levels that are keeping officers 'pinned' to their vehicles. As challenges to low recruitment are met and overcome, and staffing numbers return to appropriate levels, both departments support the implementation of community policing initiatives."

The plan also addresses some community suggestions regarding a citizen review board and periodic public reports on founded misconduct from officers.

"While there was general support for such public reports and processes, establishment of these protocols would be subject to civil service law and bargaining agreements with unions, potentially limiting the information that could be released under certain circumstances," the document said. 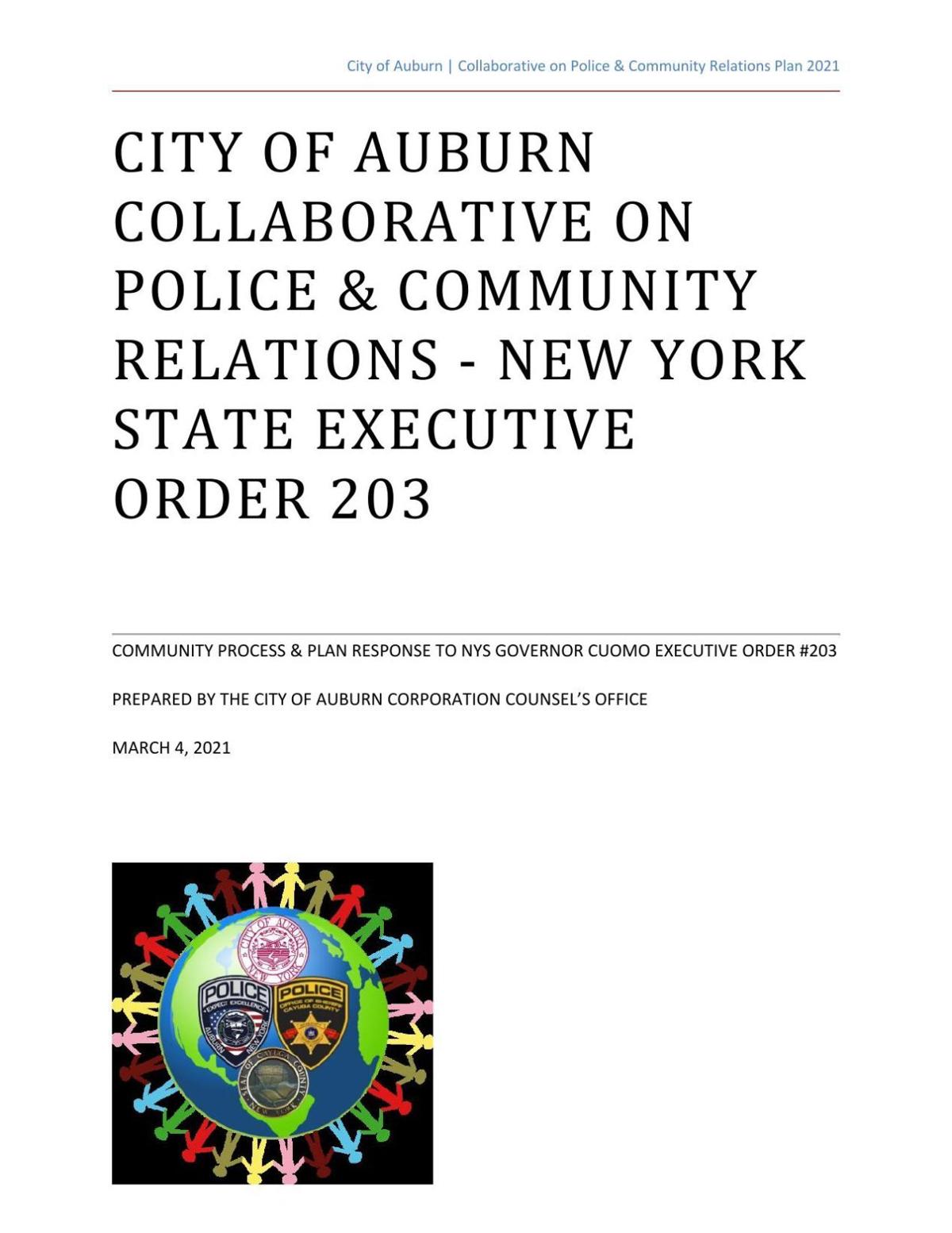 Auburn Police Department Chief Shawn Butler was interviewed for the March 4 episode of "Inside Government with Guy Cosentino," recorded and pr…