(In September, The Citizen published a special report on the current status of the Cayuga County Arts Council's efforts to restore the Auburn Schine Theater. This is both a follow-up on a few loose ends from that story's reporting, as well as a look at some new developments related to the Schine's restoration.)

Perhaps the biggest news about the Auburn Schine Theater in the last several months concerns not the building itself, but the one next door down South Street.

Lincoln South — which Schine owners the Cayuga County Arts Council had sought as part of its efforts to restore the 1938 John Eberson theater — was sold to Piccolo Properties in January. The council had hoped to buy the 21 Lincoln St. building and repurpose it as office and classroom space for the multi-purpose performing arts facility it aims to make the Schine.

"I am happy that a new neighbor is rehabbing (Lincoln South), but a bit sad that we couldn't find a way to incorporate it into the Schine project," council board of directors Chairman Jim Loperfido said in an email Tuesday. "It would have given everything needed for the (Finger Lakes Musical Theatre Festival)."

Lincoln South's new owner, Tony Piccolo, said he plans to lease office space there. He was unaware of the council's designs on it, he said.

In order to re-energize the Schine project, Loperfido said, the council is reviewing both its sustainability and renovation plans. The latter got a boost recently when the EPA agreed to allow the council to apply for asbestos cleanup funding again. Previous applications, including one for a $200,000 Brownfields Cleanup Grant in 2014, were denied because the council didn't conduct a proper site study at the time of the Schine's purchase in 1998.

"This is big news for us, as our renovation plan is stalled until (the) asbestos is remediated," Loperfido said.

Two other recent developments in the council's efforts to restore the Schine can be noticed with a deeper look.

First, the council added two board members in December: Ed Onori, who's worked on the Schine's restoration as a project manager with Beardsley Design Associates, and Chuck Taylor.

Taylor, an Auburn native who recently moved back to the area from Delaware, said he was appointed to the board after posting on its website that he wanted to join.

Being part of the board has given Taylor a new perspective on the criticism it faces, he said. Specifically, he now understands why it stays so quiet.

"It seems like any time they try to do something, they get completely bombarded by the other side saying 'nothing's going to work,' 'everything's wrong,'" Taylor said. "I'm slowly starting to understand both sides."

Loperfido said the council could add two or three more board members in March, and that the board's officer elections are tentatively set for the spring. Stressing the council's need for new blood, he said it is also redeveloping its outreach program.

The second recent development related to the council is the public release of its 2012, 2013 and 2014 filings with the New York State Office of the Attorney General's Charities Bureau.

Both the 2012 and 2013 filings had been past due. Speaking to The Citizen in September, Loperfido said they were sent that month, and contended that they'd been filed on time in the first place. The attorney general's office told The Citizen that the three filings were not received until Dec. 24.

Special report: The turbulent past, quarrelsome present and uncertain future of the Auburn Schine Theater

Founders Day 2014 was a busy day at the Auburn Schine Theater.

The three filings also continue a practice the attorney general's office could not explain: From 2007 to 2013, the council regularly changed the registration type under which it made those filings.

"An organization that has assets in New York and solicits the public has to register under both statutes," she said.

In the Schine, however, the council owns a building worth well more than $25,000. In 2009, the last year for which its extended tax return is available, the council said the Schine and its 16 South St. land parcel were worth $991,768. That year, the council paid an EPTL filing fee of $100. But, by either not declaring itself an EPTL or claiming the exemption, the council has foregone that fee every year since — even though it continues to own the Schine.

Loperfido said he could not explain the changing of the council's registration type, nor why it claimed the EPTL exemption in its 2014 return despite owning the Schine.

One of those expenses was the council's annual fundraiser, Artini, where it sold tickets to a raffle for artist Gary Jacobs' rendition of the Schine auditorium as the council hopes to restore it.

However, it appears the painting was not awarded to anyone. And per state law, the council would have had to draw a winner no more than 180 days past Artini: March 24, 2015.

Asked about the matter in September, Loperfido said that any raffle tickets sold at Artini would be included in a drawing at the last of four film presentations he was planning for that fall.

Those presentations have not taken place, though. Loperfido outlined the series in September: It'd cover Ithaca silent film artists Theodore and Leopold Wharton, Alfred Hitchcock, TV with central New York ties and a comparison between "Star Trek" and "Babylon 5." An appearance by Lt. Saavik actress Robin Curtis from "The Search for Spock" was even planned for the "Star Trek" talk, Loperfido said.

However, "conflict after conflict" delayed the presentations into 2016, he said. For that reason, the council was forced to return a 2015 Finger Lakes Community Arts Grant for $1,590 that would have supported the presentations had they happened that year.

FLCAG coordinator Meg Clary said that she received the check on Tuesday.

Without the support of the grant, Loperfido said, he is talking to a few partners who could lend the series a hand. And whether it's at the film presentations or a series of outreach meetings the council is planning for spring and summer, the raffle will reopen then, he said.

The Cayuga County Arts Council's current redevelopment plan for the Auburn Schine Theater calls for five phases. The first phase — to establish sustainability and renovation plans for the building — is done. Here are the following four:

• PHASE FOUR: Retrofit the marquee with low-cost LED lighting and new metalwork where needed. Estimated cost: To be determined following a spring 2016 technical review of the marquee.

• PHASE FIVE: Level the floor of the auditorium, install retractable seating, remodel the stage area and dressing rooms, and install a fly assembly. Estimated cost: To be determined.

Should Auburn be named the winner of a $10 million state grant competition at the end of June, two of the six projects that stand to gain are …

After a stagnant 2016, the Cayuga County Arts Council has taken steps early in 2017 to reinvigorate its long-running restoration of the Auburn…

Gallery: Inside the Auburn Schine Theater

The Auburn Schine Theater, a 1938 movie theater designed by architect John Eberson, has been in the process of being restored by its owners, t… 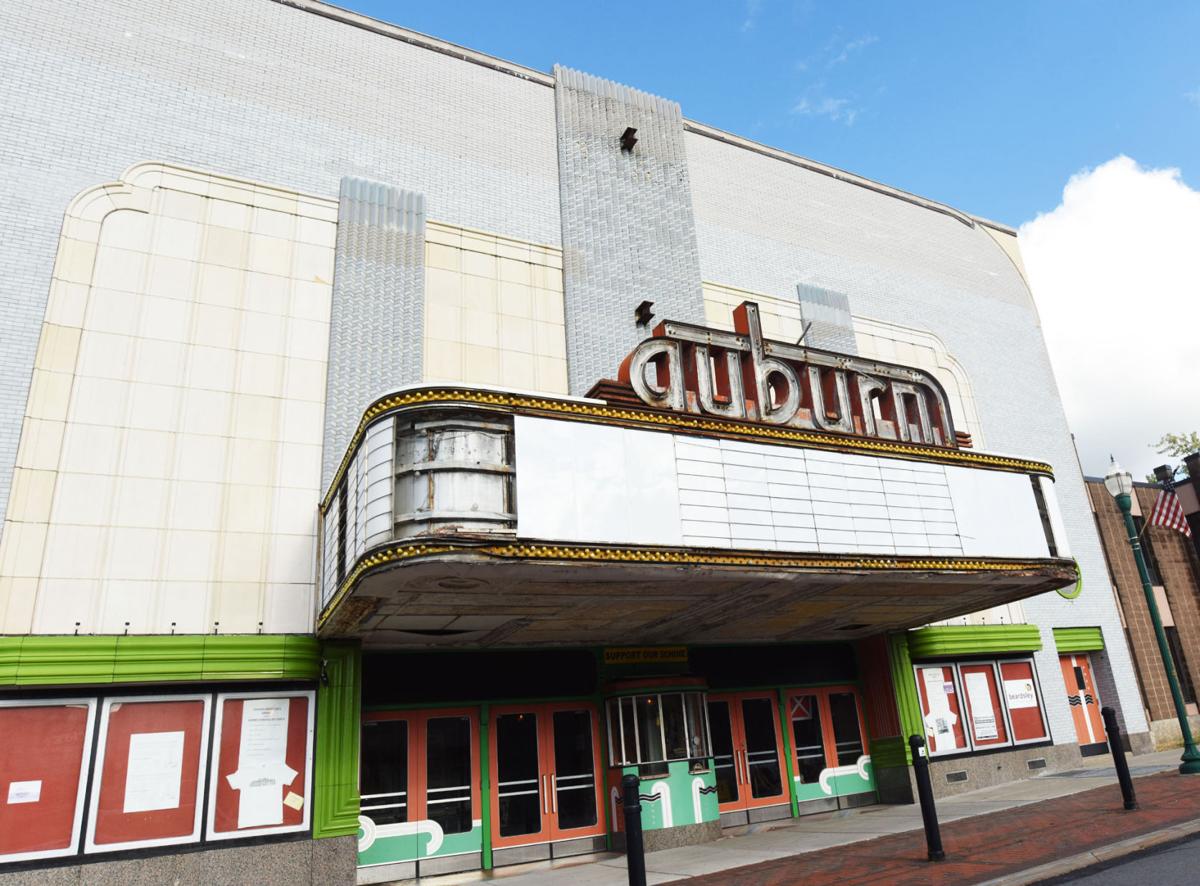 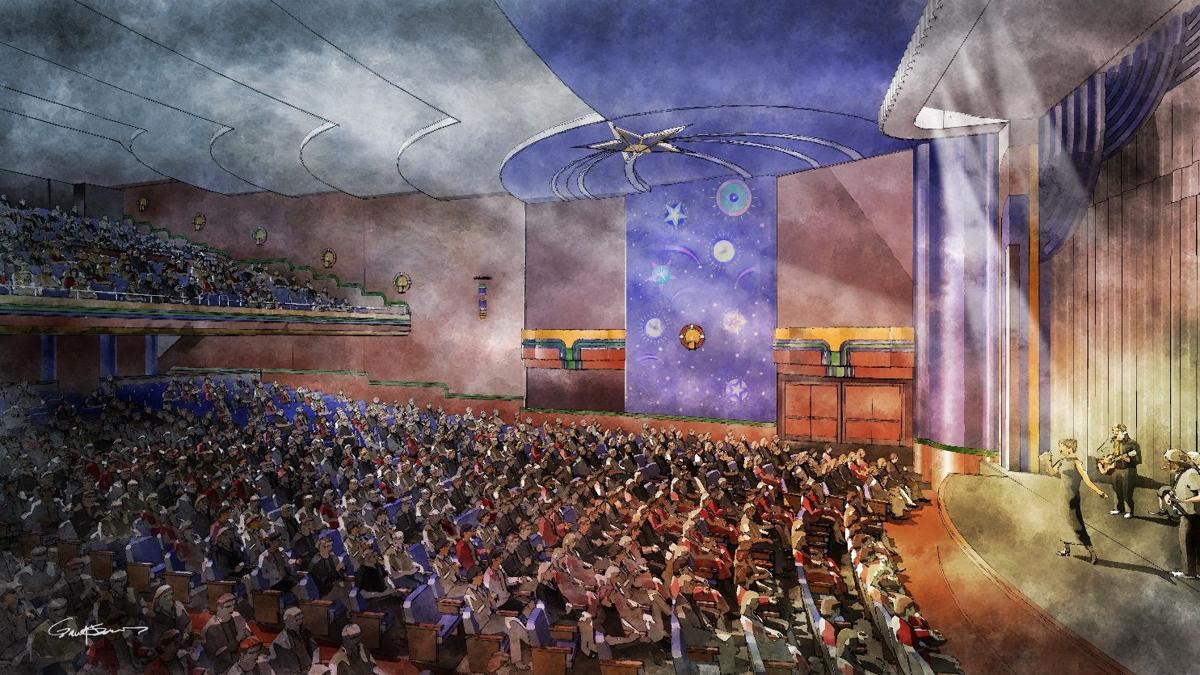 Gary Jacobs' rendition of the auditorium of the Auburn Schine Theater as the Cayuga County Arts Council hopes to restore it. 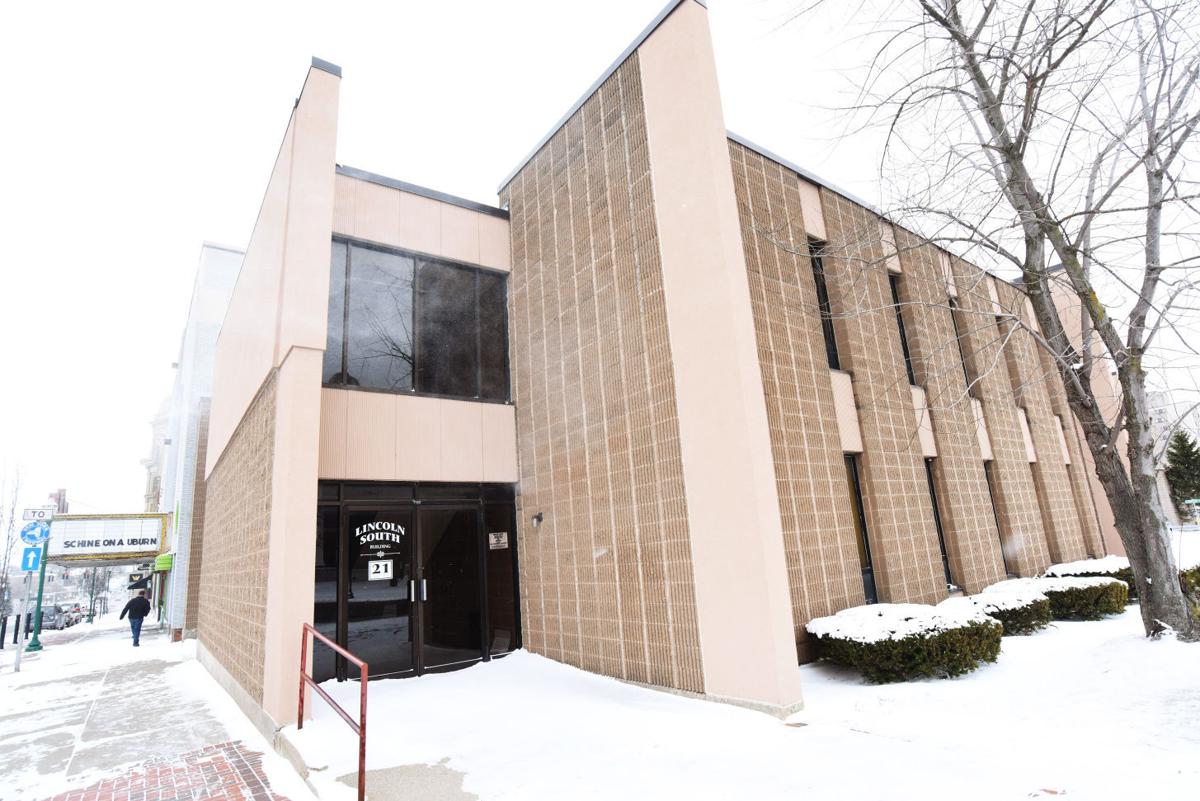 Lincoln South is located next to the Auburn Schine Theater at 21 Lincoln St., Auburn.