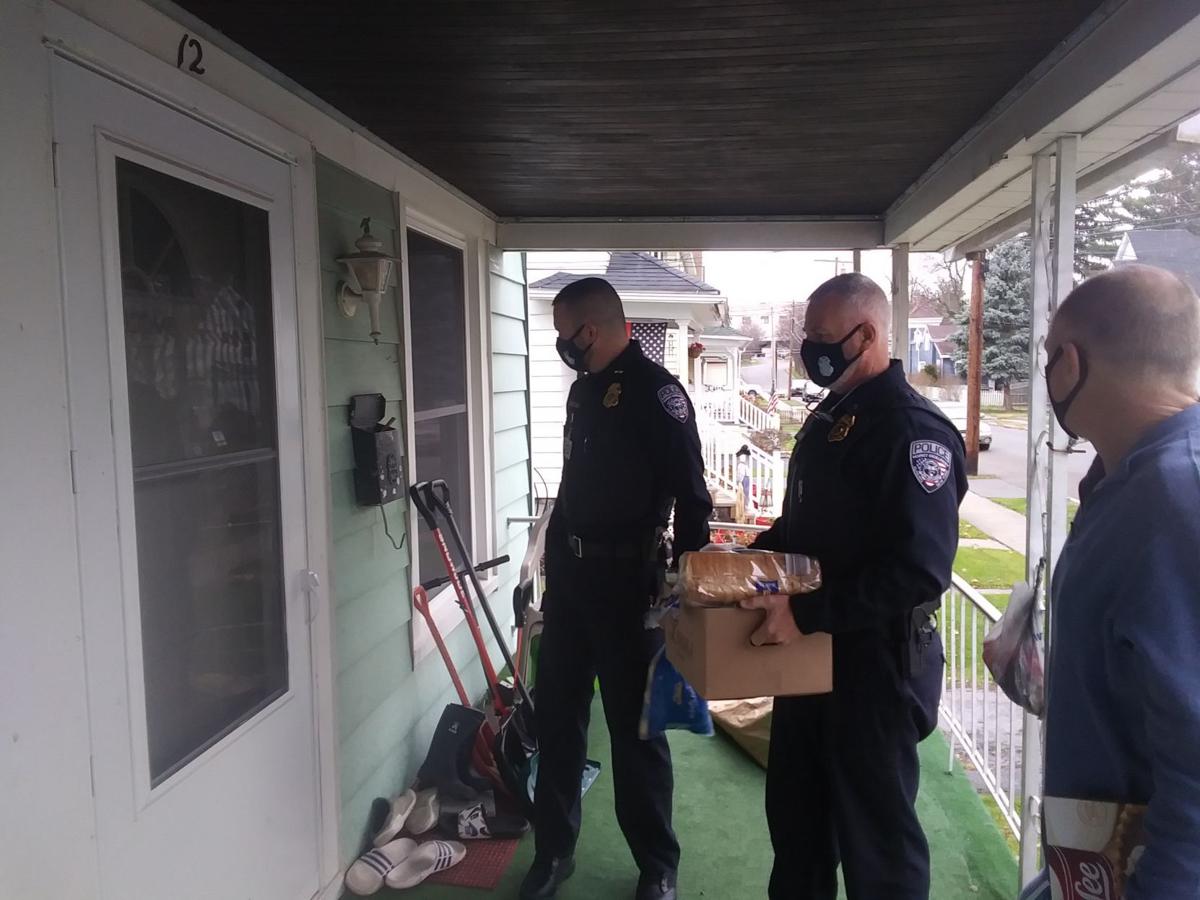 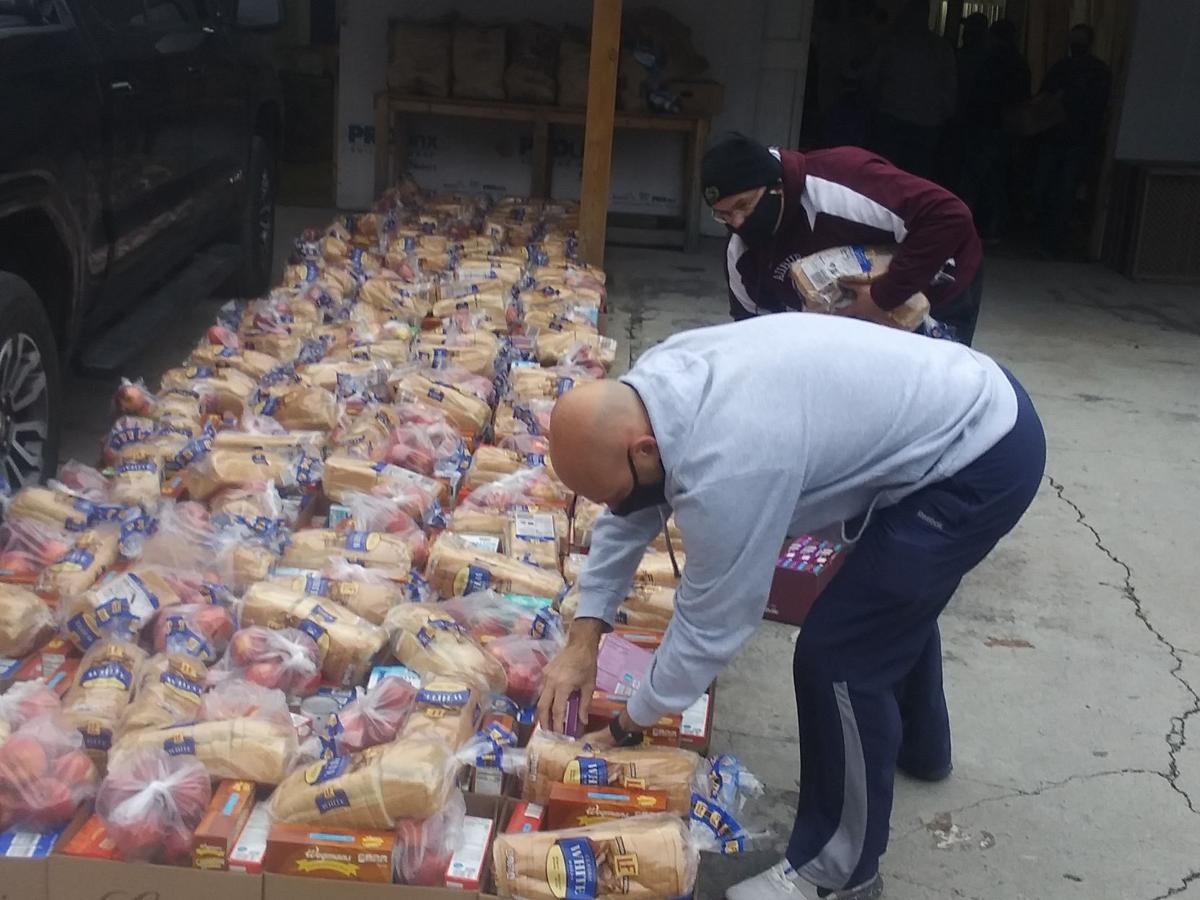 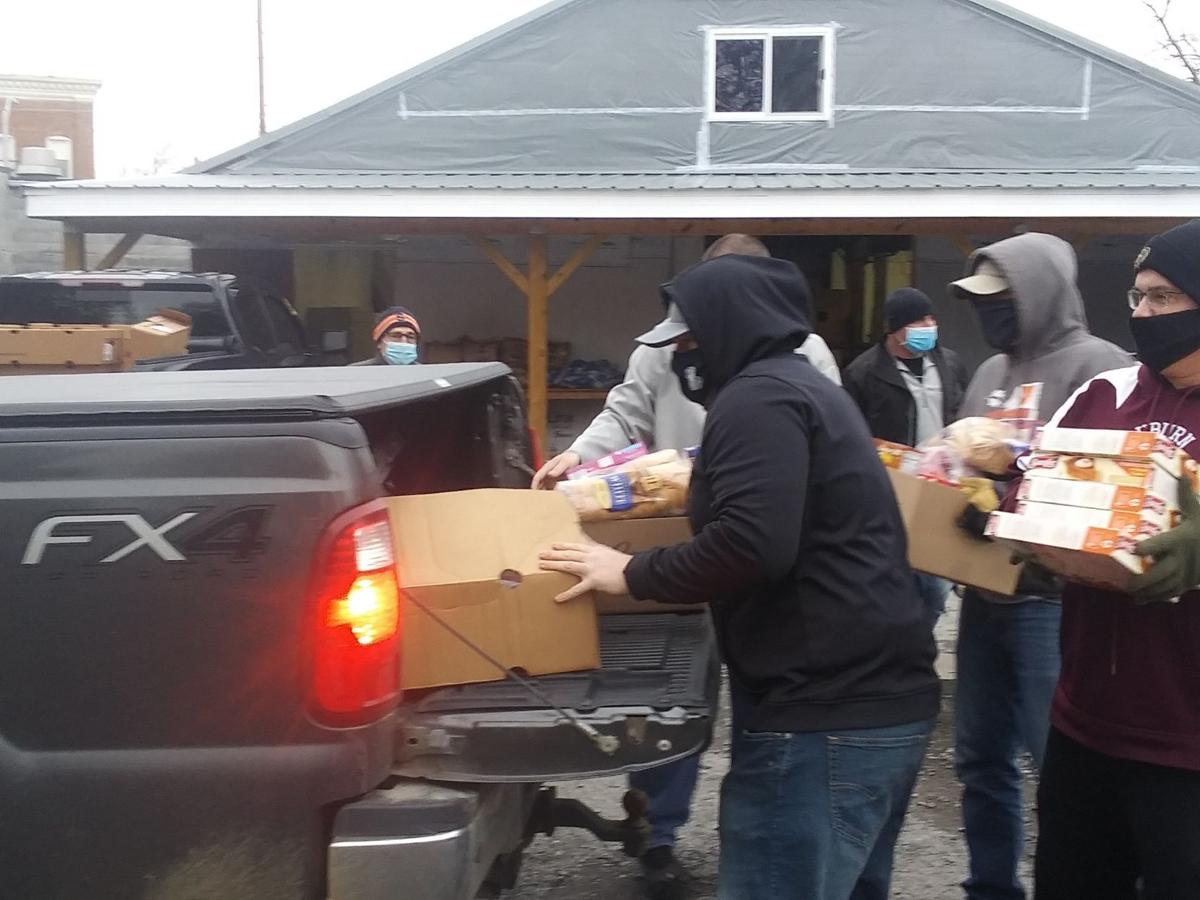 Volunteers load food onto a truck for a Thanksgiving meal giveaway in Auburn Wednesday.

Chris Major said the need for the annual Thanksgiving meal giveaway in Auburn has grown this year during the COVID-19 pandemic, but people have also donated more than ever.

Major, an Auburn Police Department officer, began the delivery event with his community service organization, Majorpalooza, 10 years ago. Members of the Auburn Police Local 195 union, the Auburn chapter of the New York State Correctional Officers and Police Benevolent Association and the Auburn Teachers Association all donated money for the effort.

A total of 114 meals were given out over two days to families of children in the Auburn Enlarged City School District, with 110 of them set to be brought to doors Wednesday. Deliveries were contactless, with recipients given a time frame for when they'd be dropped off and then contacted once they were delivered.

Looking out at the dozens of meals packed and ready for delivery on Wednesday morning, Major said that while the need of families has been incredible, he has been heartened by the outpouring of generosity.

The goal this year was to raise $1,500, Major said. As of late Wednesday afternoon, though, Majorpalooza's GoFundMe fundraiser amassed over $2,970. Every family could receive Thanksgiving staples such as a turkey, a pie and a bag of potatoes, but the boxes also included items such as bread, apples, peanut butter, cereal, granola bars and spaghetti sauce, so families will have food over the weekend. Four deliveries were made Tuesday to families without stoves, Major added.

Though the school district identified families in need as they always do, some families reached out to his organization directly this year, which hasn't happened before.

"It takes a lot for a family to reach out and ask for help," he said.

He thanked the volunteers and organizations who helped, including donors such as the Fox Toyota car dealership and Quinn's Trucking Solutions, both based in Auburn. Majorpalooza and the law enforcement unions are also raising money for Christmas events such as Shop with a Cop, where students go holiday shopping with law enforcement personnel.

The meals were put together at a building owned by teachers association president Justin Herrling instead of Auburn Junior High School, where the deliveries are normally assembled. School Resource Officer William Morrissey, Auburn City Councilor Jimmy Giannettino, Auburn High School teacher Matt Moskov and members of Local 195 and NYSCOPBA were among those who pitched in.

Herrling said he is proud of how much teachers donated, but he isn't surprised.

"I think in a time like this, teachers especially know how much some of these kids are hurting and these families are hurting. They know that parents are out of jobs, kids are struggling to deal with the situation," he said. "And I think teachers making a small donation, it allows them to know that they're giving something to a family that's going to go to use."

Vehicles arrived later that morning in a line, so volunteers could load the meals into them. Major would call out how many meals were needed in each car, and volunteers would load the boxes and food, similar to an assembly line.

Auburn Police Chief Shawn Butler, Deputy Chief Roger Anthony and Lt. James Slayton arrived to deliver some food, as well. They brought food to people in areas such as Cady and Liberty streets. When residents opened their doors to get their deliveries, families often gave short thank-yous to the officers before the trio walked away with smiles on their faces.

At one point, after Local 195 president Joe Villano, his son Joey and NYSCOPBA member Robert Chapin did a delivery, Villano noted those brief exchanges with the families are common, adding that it can be hard for families to admit when they need help. He also said he was happy the different unions could come together to help more people.

Keith Vincent, president of Auburn's NYSCOPBA chapter, said union members donated their own money to help out. He noted this event was also an opportunity to show law enforcement doing positive things for the community, and said members of the group were glad to assist, especially with the financial strain brought on by the pandemic.

"It's the right thing to do. Community relations is a big deal, and I think it shows good solidarity when we join up with APD and collectively come together as a law enforcement community, really, and give back to the community," Vincent said.

The Citizen's top 10 stories of the week.

Volunteers load food onto a truck for a Thanksgiving meal giveaway in Auburn Wednesday.