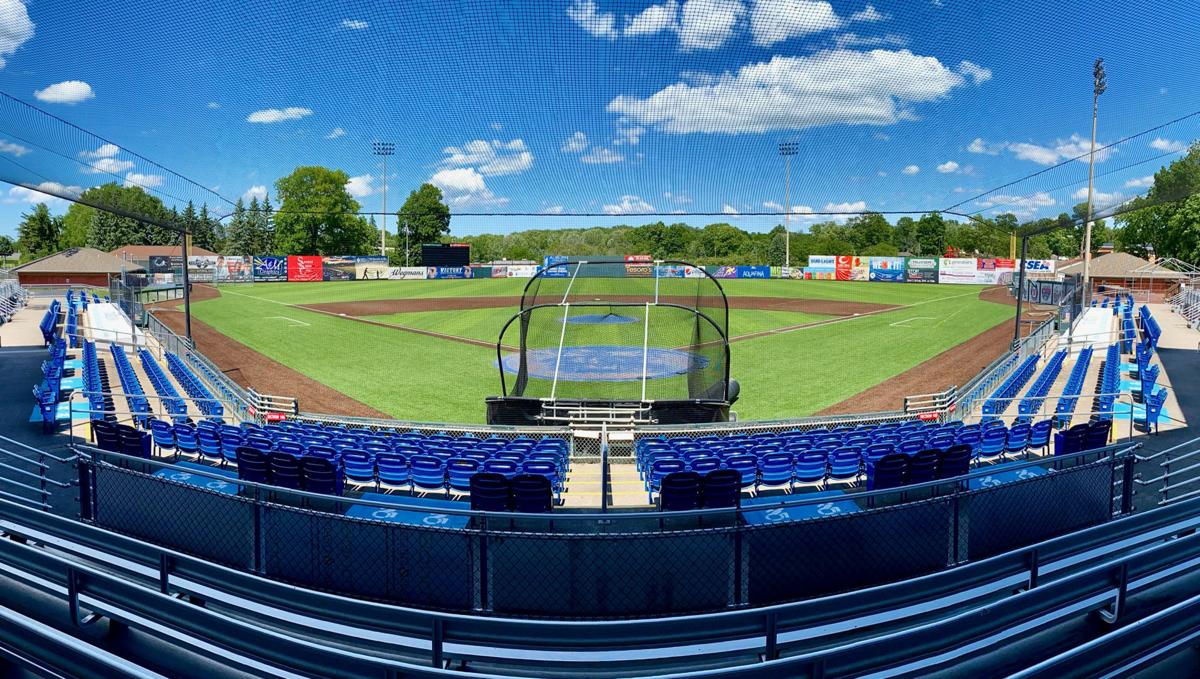 Falcon Park in Auburn remains closed due to the COVID-19 pandemic. 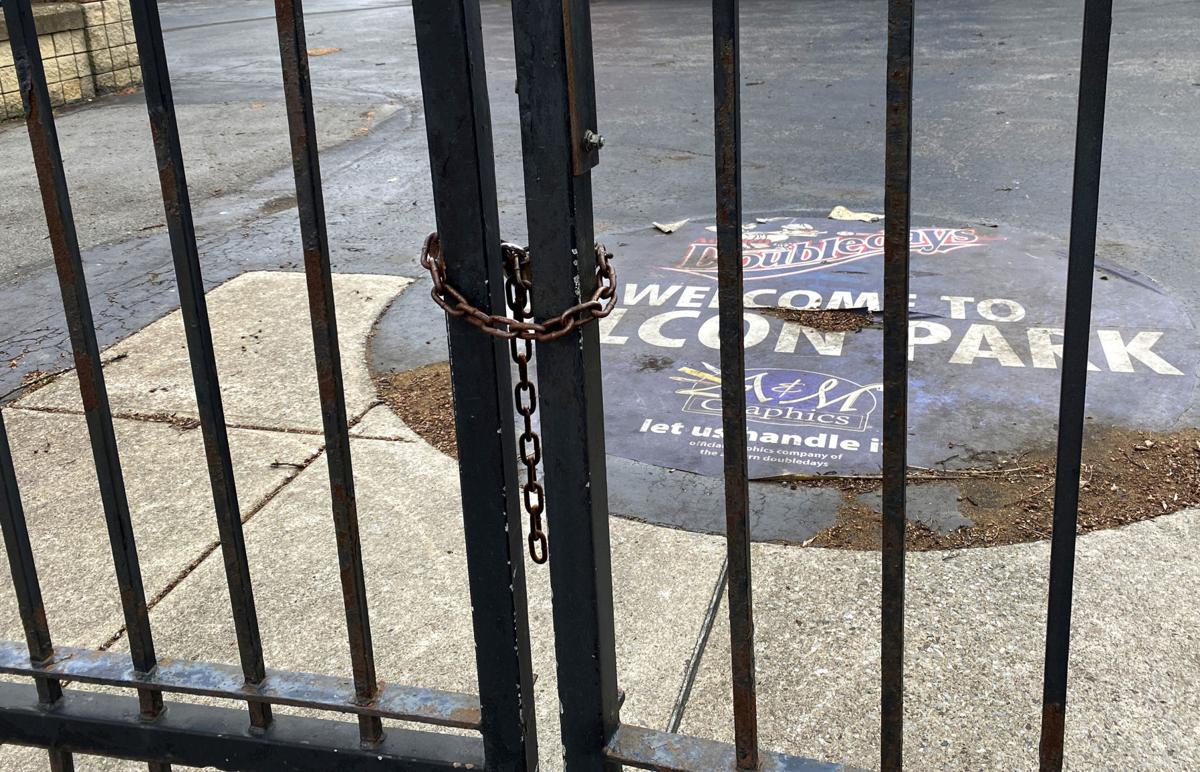 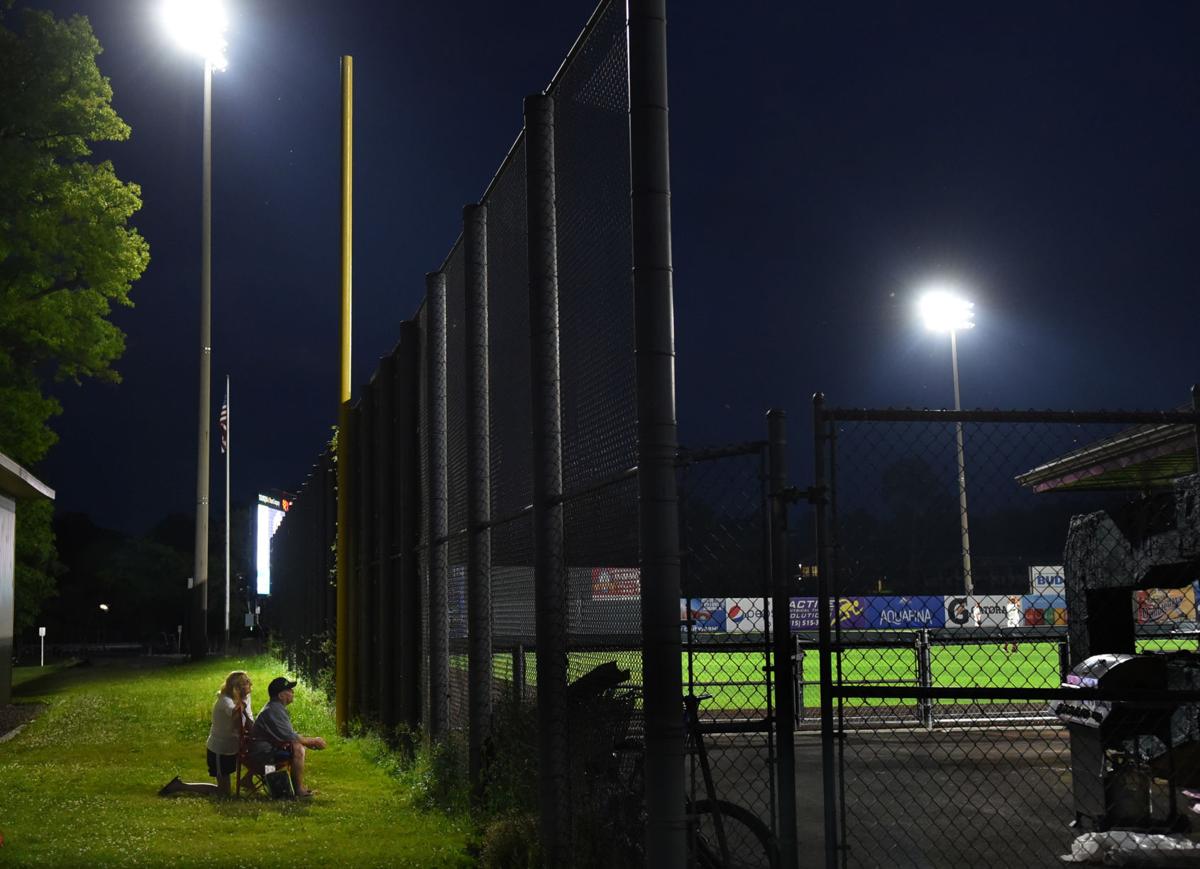 Ozzie Elhamahmy and his wife, Marcia Green, watch the Doubledays' game against Batavia outside of the left field fence at Falcon Park in 2019.

Late summer months at Falcon Park are often some of the busiest for one of Auburn's crown jewels.

The field, dugouts and clubhouses are usually occupied by young professional ballplayers looking to make a name for themselves. In the stadium's concourse, fans pass through the stadium's turnstyles, greeted by the familiar scent of ballpark red hots and fries.

This year, there's no howling from young children chasing down a foul ball, no beer to gulp down during nine innings of Doubledays baseball.

Instead, Falcon Park sits empty and unused. The ballpark has been closed to the general public, aside from very special circumstances, since March. The last sporting event Falcon Park hosted was a men's baseball doubleheader between Cayuga and Corning community colleges on March 11.

The Auburn Doubledays, who have called Falcon Park home since the current stadium was built in 1995, were supposed to begin play June 18. That was until the New York-Penn League postponed and later canceled the 2020 season due to the COVID-19 pandemic. The decision meant that for the first time since 1981, Auburn would not host professional baseball.

While the Doubledays are not Falcon Park's only tenant — Cayuga Community College utilizes the newly renovated turf field for several of its athletic programs, while the Auburn High baseball team uses the park during the spring — their absence has ramifications.

The park, which is owned by the city of Auburn, has operating costs. The current annual budget, which went into effect July 1, set aside $213,097, according to information obtained from the city. That's down from the budgeted $287,865 of the previous year. The budget covers employee salaries, gas and electric bills, and operating supplies.

"There certainly will be quite a bit of savings related to utilities, general maintenance and staff," Auburn City Manager Jeff Dygert said. "When the Doubledays were playing, there was staff down there that would take care of the field, get things ready, get things cleaned up at the end of the night, things like that. Those things won't happen, so there will be some savings."

Dygert did not provide exact figures for the financial implication of Falcon Park's shutdown, but city officials said earlier this year that the cancellation of the Doubledays season would save the city about $20,000 for the current fiscal year.

However, there was cost to preparing for a Doubledays season that ultimately did not happen. Mayor Mike Quill wrote in an April 21 letter to U.S. Rep. John Katko, in a plea for direct federal funding for local governments, that Auburn would stand to lose $100,000 "already spent on the 2020 season" if there was no New York-Penn League. Funding for the Doubledays' season — the team is owned by Auburn Community Baseball, an LLC — is generated through ticket sales, advertising and concessions, and that potential revenue has been lost.

While the ballpark is currently vacant, that's not to say it's collecting dust. Head groundskeeper Brian Rhodes told The Citizen in July that, after city employees were required to stay home for several weeks at the beginning of the pandemic, he's been able to take on a handful of projects around the park that would otherwise be impossible during a normal year.

"We have all this time now that used to be tied up in baseball," Rhodes said. "We're getting a lot of field maintenance, building maintenance, we're deep-cleaning the entire facility. It's actually a lot of good work we're getting done during all this. There's a silver lining. Reshaping the bullpen mounds, power washing the entire concrete concourse around the box seats, that hasn't been done in years."

Rhodes also doesn't have to concern himself with the field itself becoming unkempt with weeds and long grass. In 2018, the city of Auburn and Cayuga Community College came to terms on a $2.1 million project to install a turf field at Falcon Park (among other renovations), that would turn the park into a multi-use facility shared by CCC's athletic programs. The installation of the turf was completed in spring 2019.

While the college's usage of Falcon Park in 2020 will be almost inconsequential, CCC President Brian Durant told The Citizen in July there is no intent to renegotiate terms of the contract with the city of Auburn. Dygert also pointed out that the contract states CCC is paying for "the ability to use the field," even if certain athletic offerings don't take place.

Said Durant, "When we made this investment and partnership with the city to maximize a resource like Falcon Park, we knew that this was a long-term investment that gives us a home. This was something that the college looked at for decades. We're confident in the lease and we've budgeted and we'll manage the obligations set forth. Our choices to not run our programs this year are not related to the terms of the lease. There will not be discussions (to renegotiate)."

Who next takes Leo Pinckney Field at Falcon Park remains to be seen. The New York-Penn League season begins in mid-June, but the Doubledays and Minor League Baseball as a whole are in flux as Major League Baseball and MiLB negotiate on a new Professional Baseball Agreement. The current PBA was set to expire after the 2020 minor league season, which ultimately did not take place.

Reports dating back to last October found that the new PBA could eliminate several low-level minor leagues, including the New York-Penn League, by the 2021 season. If the reported proposal is agreed upon, the Doubledays would be a casualty and Falcon Park would lose its most prominent tenant.

While CCC's fall sports won't happen, Durant did not rule out arranging for spring programs, like baseball or the incoming men's and women's lacrosse teams, to use the facility in the coming months to prepare for their spring seasons. CCC has not posted schedules for the Spring 2021 season, but if the 2020 schedule is any indication, CCC baseball would need the field by early March.

Next in line would be Auburn's varsity baseball team. The Maroons are tentatively scheduled to play their first game at Falcon Park for the Spring 2021 season March 13. However, the 2020-21 interscholastic calendar is in jeopardy as school districts await guidance for reopening for the upcoming academic year.

There are currently no plans for public events, such as concerts, as New York's pause currently has limits on large gatherings.

"At this point, we don't have any definitive plans for any use (of Falcon Park)," Dygert said. "If some of our restrictions through (New York state on PAUSE) are lifted, we may consider doing something down there. It doesn't really look too promising."

With the absence of the Doubledays and sports altogether, Falcon Park's future is as up in the air as the contagion that forced its inactivity.

Falcon Park in Auburn remains closed due to the COVID-19 pandemic.

Ozzie Elhamahmy and his wife, Marcia Green, watch the Doubledays' game against Batavia outside of the left field fence at Falcon Park in 2019.