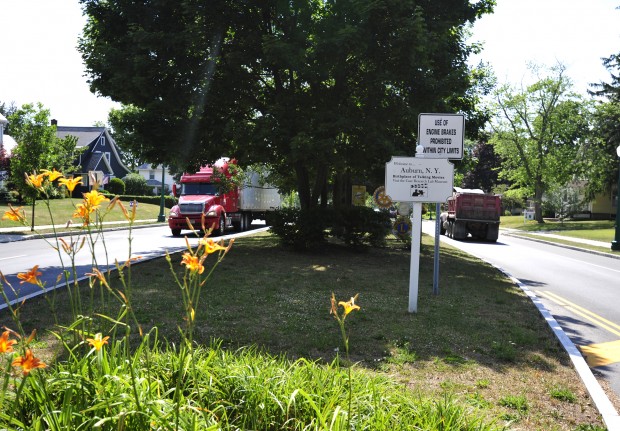 The median, upon entering Auburn via Route 20 West, where the Auburn Beautification Commission hope to install a new sign welcoming visitors to the city. 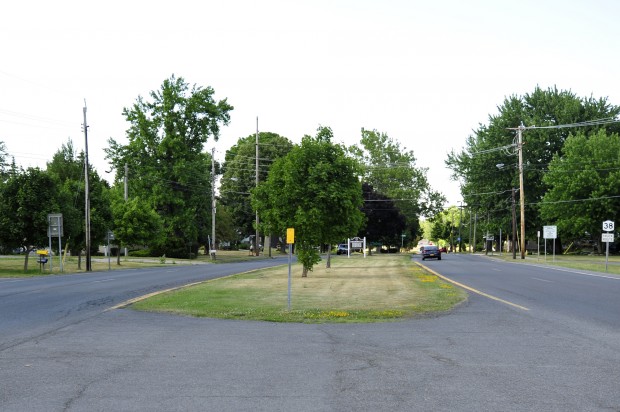 The Auburn Beautification Commission hopes to install a new welcome sign in the median of Lake Avenue, just past Auburn High School, were no sign currently exists.

Auburn's entrances will soon be a little more welcoming thanks to two local nonprofit organizations.

"The Auburn Beautification Commission strives to do projects around the city to help beautify Auburn," Hilary Ford, vice chair of the commission and a member of IGNITE's steering committee said Monday. "It was brought to our attention that the gateway signs were in bad shape and not very visible, so we decided to do something about it."

The commission drew up plans for a new sign, modeled after one installed at the entrance of Ford's hometown of Paducah, Ky.

It features two brick pillars on either side of the dark blue sign. In raised gold letters "Welcome to Auburn," above the year the city was established, will be prominently displayed.

"We think it helps to keep the historical look that we have throughout the city and still keeps it uniquely Auburn," Ford said.

She said the Beautification Commission originally intended to install only one new sign at the intersection of Lake Avenue and Fleming Street, near Auburn High School.

But the funding from IGNITE will allow for a second sign to be installed on state Route 20 at the city's eastern gateway.

IGNITE used previous awards through the program to spawn a winter celebration this year in downtown Auburn and an initiative to entice young people to vote.

"We were going to install a sign by the high school no matter what," Ford said. "Thankfully, this funding from IGNITE will allow us to do two at once."

Ford estimated the cost of each sign at $6,000. The grant from IGNITE will require a matching amount of funding from the Beautification Commission.

Building collapses into floodwaters in China

Astronaut captures the 'Southern Lights' aboard the ISS

Astronaut captures the 'Southern Lights' aboard the ISS

One person killed after gunfire exchange with police at Auburn home

One person was found dead inside an Auburn home where police officers encountered gunshots and returned fire during an incident Tuesday morning.

A Cayuga County woman has died of COVID-19, the county's 98th virus-related death of the pandemic.

An Auburn man will serve up to four years in state prison for a pair of domestic violence-related convictions.

Rescue vehicles responded to a report of a multi-car accident on the New York State Thruway Friday night west of Exit 40 in Weedsport.

More than 70 years after a Cayuga County soldier was killed in the Korean War, his remains have been identified.

The median, upon entering Auburn via Route 20 West, where the Auburn Beautification Commission hope to install a new sign welcoming visitors to the city.

The Auburn Beautification Commission hopes to install a new welcome sign in the median of Lake Avenue, just past Auburn High School, were no sign currently exists.