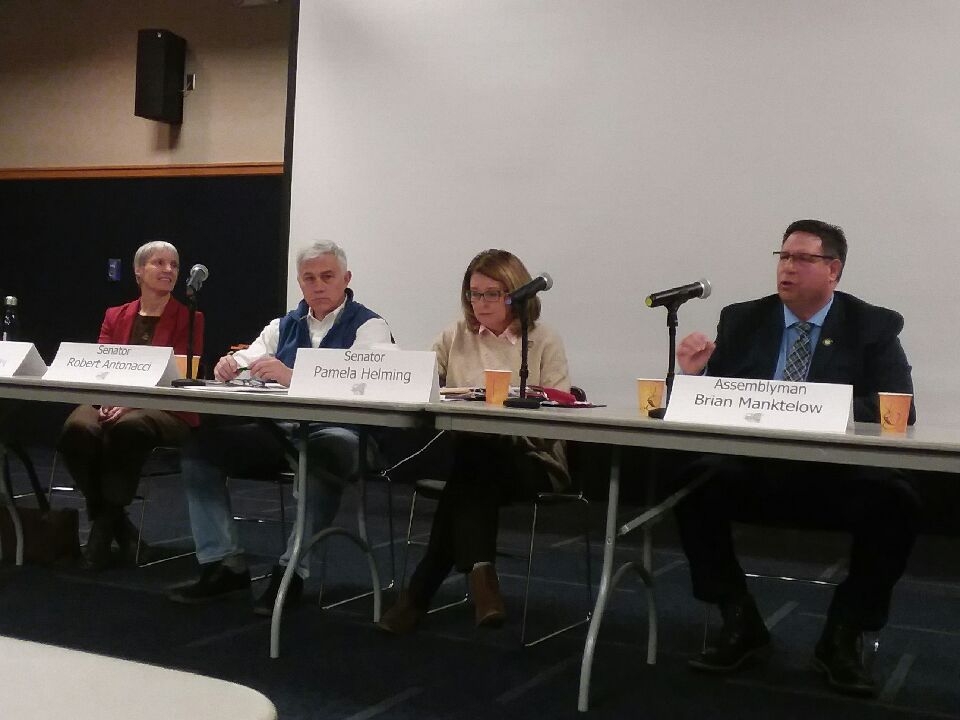 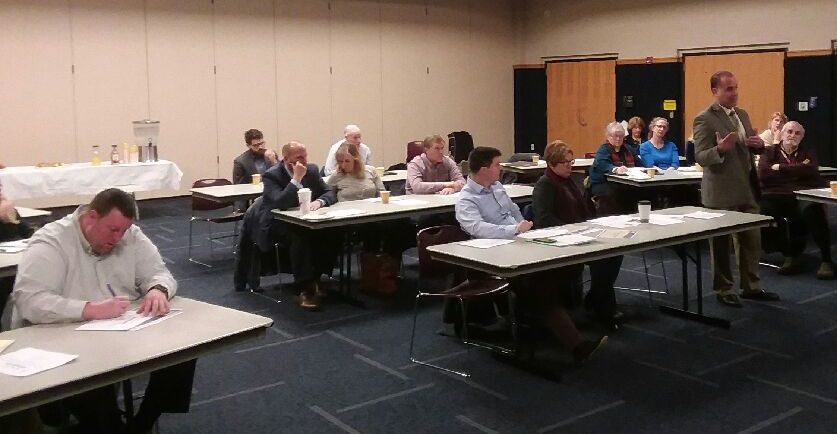 Dr. Rick Timbs, executive director of the Statewide School Finance Consortium, gave a presentation on the budget proposal. He said that education isn't funded enough to be spread properly to each district and that a lot of the data used to determine aid are at least a decade old.

Timbs said these issues have lingered for years.

"We have growing frustration that actually nothing is being solved here," Timbs said after the forum. "It's same old, same old."

Helming noted this is her third time attending the forum.

"I've been hearing pretty much the same story now for three years with no real answers from Albany, so I'm a bit embarrassed by that," she said. "Rick always gives us an outline on what needs to be done. I feel like that falls on deaf ears, really."

Helming said she looks forward to "meeting with my individual school districts."

"I always find that very, very helpful, to sit down one-on-one, to hear what your specific needs are and to tackle those as best we can," she said.

May, the sole Democratic legislator in the room, said she learned a great deal from the event, even though Cayuga County is not within her district. May, of Syracuse, was elected to the newly Democrat-led state Senate in November.

"I really want to learn more about what the issues are in all of central New York, because I really do feel like I'm the advocate for central New York in the new majority," she said.

"Education matters a lot to me, and as I'm looking at the budget I'm realizing there's a lot I don't understand," May said. "So I learned a lot here."

Pirozzolo told the legislators he appreciates their support and said he feels there is a serious lack of state aid for Auburn, Cato-Meridian and Port Byron.

"We have so many districts that are being overfunded and continue to get more money than the schools that are underfunded, and it's time to take politics out of the education, because they don't belong there," Pirozzolo said. "The wealthier schools continue to get wealthier while our poorer school districts ... are getting the lowest amount of increases."

Pirozzolo said the state average for spending per student is around $23,500 per student, above Auburn's average of around $17,500 per student. He also referenced cuts the district has made in years past such as the 2011 shutdown of West Middle School and staff cuts.  He said the district is seeking guidance on where the district's advocacy efforts should be directed.

"It's frustrating for all of our board members and our community. We go around and speak about it, but nothing changes, and we know that you help us, but we don't know where to go next."

Helming said that she and her fellow legislators advocate for schools despite being Republicans during a time when the Senate is controlled by Democrats.

"I think we continue to advocate just as strongly as we were when we were in the Senate majority."

Charles Borgognoni, executive director of the Central New York School Boards Association, said after the forum that he felt good about how the event went, noting May's appearance at the event despite not officially representing any districts in the area. He said he felt the event carried a sense of bipartisanship.

"No body was looking to one-up anybody else, so from that perspective, it was good."

Manktelow said the information he learned at the forum was helpful. He said he was willing to advocate for schools.

"I'm here to work for you guys. I'm not here to collect a paycheck and sit around,"  he said.

Cannabis company Terrapin has announced plans to open a production facility in Auburn.

A Cayuga County woman has died of COVID-19, the second virus-related fatality in October and the 105th since the pandemic began in March 2020.

Three people were taken to a hospital after a two-car accident in Locke on Friday night, Cayuga County 911 dispatchers said.

After a brief decline, COVID-19 active cases and hospitalizations are on the rise again in Cayuga County.

For the second consecutive day in Cayuga County, there were more vaccinated individuals testing positive for COVID-19 than infections among un…

A program on The History Channel recently featured a professor from Cayuga Community College.