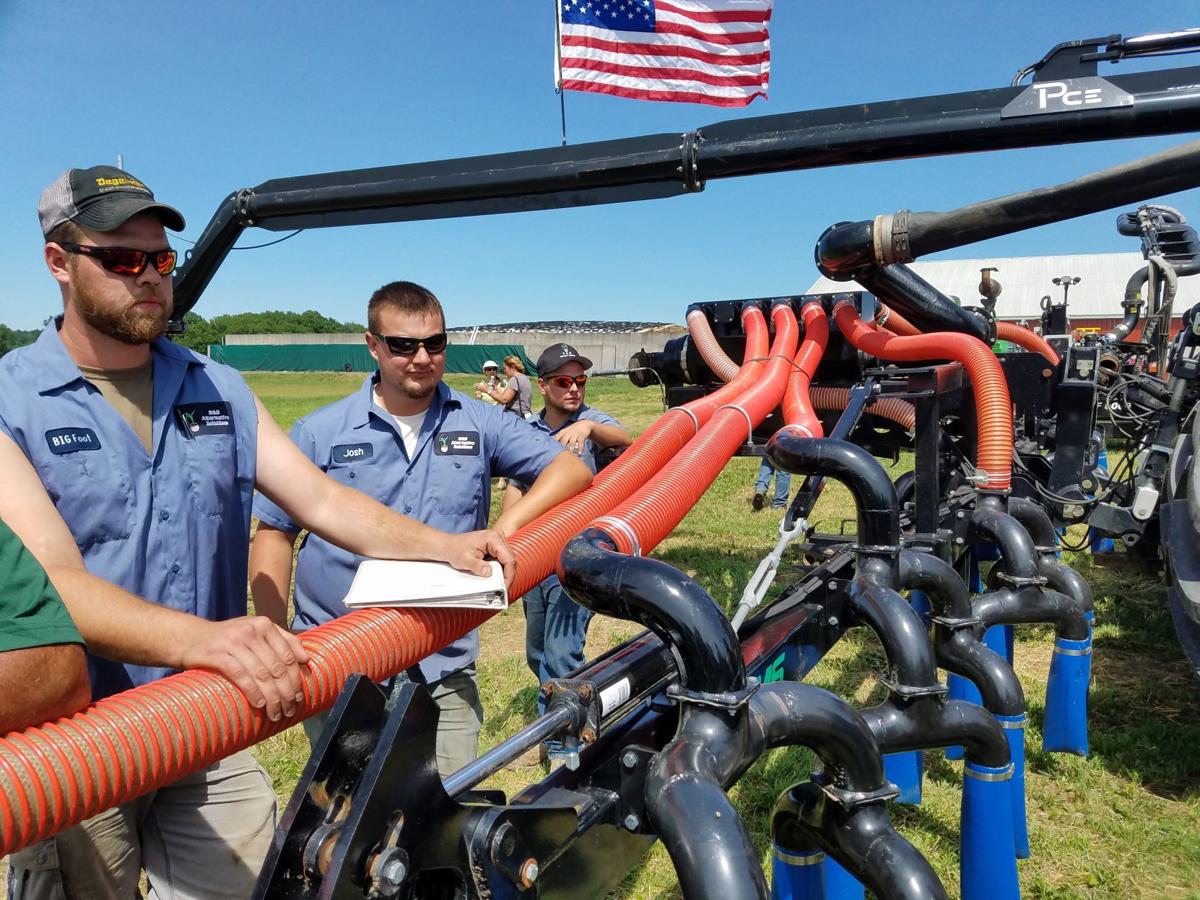 Fessenden Dairy in King Ferry utilizes R & B Alternative Solutions of Genoa for their specialized equipment to "intimately" mix liquid manure into the soil. The dairy held a tour Friday to explain its best practices. 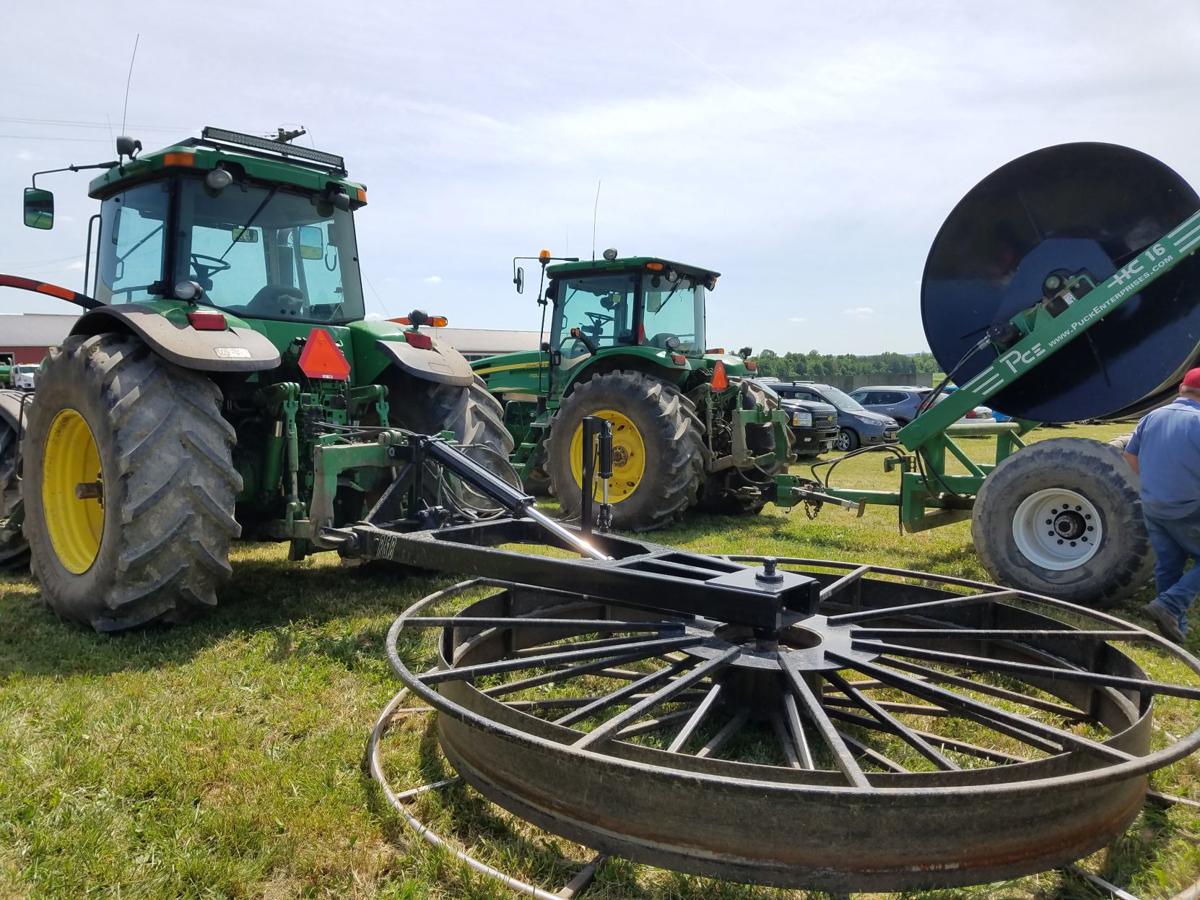 A hose hustler, left, and hose cart, right, are used to move the tubing used to pump the manure around the fields and away from obstacles. 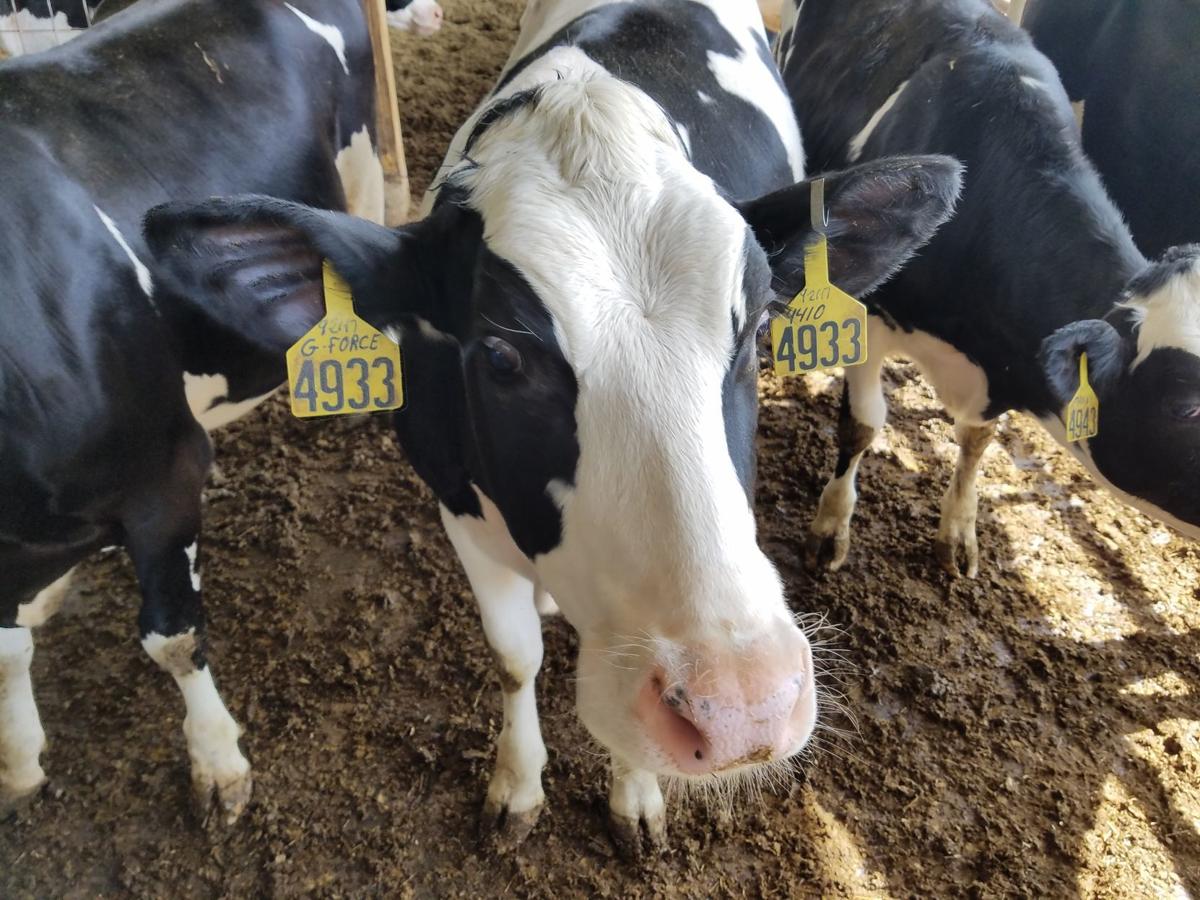 One of hundreds of cows at the Fessenden Dairy in Kings Ferry, which hosted a tour on the process of the manure cycle in dairy farming.

KING FERRY — There are more than 1,200 cows on Tim and Ronda Fessenden's dairy farm. As one might imagine, those cows produce quite a lot of manure. But what happens to it all? To answer the question, the Fessendens hosted a a tour of their King Ferry farm to demonstrate the manure cycle.

The Fessenden's hosted the tour with the help of Partners for Healthy Watersheds, an advocacy group that works for environmentally and economically sustainable agricultural practices, to help educate the public about what goes into making the wide array of dairy products.

“We hope to bring the connection with what we do in the field to this,” Tim said, holding a cup of Fage Yogurt that's manufactured in Johnstown with milk from the Fessenden's farm.

Beside actual dairy production, the tour focused on the manure cycle and how properly managing it can maximize efficiency for farmers that will both help keep them in business and minimize any potential environmental concerns.

The process begins in the fields, where the Fessenden's grow corn and other crops that are used to feed the cows. After the cows eat, they defecate it onto the pen floor where automatic scrapers move it into an underground storage hold that pumps into a treatment facility elsewhere on the farm.

Many of the cows in the pens are fitted with transponder collars that are almost like specialized Fitbit pedometer. The collars keep track of each cow's milk production level or activity, which can be used to determine if a cow might be ill or if it's entered heat and needs breeding.

Most farms today breed their cows using artificial insemination rather than keeping bulls with the female heifers, according to Ashley Randle with the Northeast Dairy Producers Association, one of the partner organizations of the Healthy Watersheds group.

With 700 milking cows and 550 replacement cows in waiting, Fessenden Dairy sees an average of six to seven calves birthed a day, meaning all of the farm's 10 employees have to be trained to handle births.

The milking cows and replacement cows are cycled in and out based on their pregnancy cycles. Each cow calves approximately every 13 months, with the pregnancy lasting nine months like a human's. After giving birth, the cow produces milk for approximately 300 days, which allows the Fessendens to ship out approximately 6,300 gallons of milk a day, according to Tim.

Peter Wright, an agricultural engineer with Cornell University's Dairy Environmental Systems Program, says the production period for cows can be extended through the use of hormones in their feed. Using hormones allows the cows to produce for longer and requires less feed, and as a result less energy to grow the feed, according to Wright.

The Fessenden's do not use hormones on their cows, Tim said.

Once born, male cows are quickly sold to other farms equipped to handle them, while the females are kept here to grow in different cohorts based on age. Jessica Ziehm, who helped organize the tour with the New York Animal Agriculture Coalition, another partner group, said she compares the cohorts to school grades when giving tours of her 1,100 cow dairy farm.

Like a grade, the cows grow together before being gradually introduced to larger groups as they develop and learn to socialize as a herd.

Back in the treatment facility, the manure is separated into liquid and solid components. The solid components are further divided based on moisture content and, after some further processing involving a specialized drying machine, is either turned into bedding for the cows or compost that is then bagged and sold.

Ronda Fessenden said they began selling the compost primarily as a way to help offset the costs of their operation, which requires $3.5 million a year to run.

The high costs associated with farming plus low prices for milk is what forces farms to seek ways to maximize efficiency, like through composting, according to Wright. In addition, it's easier for larger farms to squeeze more savings out of those efficiency measures than it is for the small dairies the public often pictures, Wright said.

“It's all about economies of scale,” Wright said.

The liquid manure is piped into a covered storage lagoon near the edge of the pond where its kept until it can be put into the crop fields.

To do that, the Fessendens hire R & B Alternative Solutions, founded by brothers Ryan and Tyler Beebee out of Genoa, to use their specialized equipment.

Compared to traditional manure spreaders, which mostly just placed it on top of the soil, the equipment used by the Beebees, including a lead pump, a dribble bar, a hose hustler and more, essentially injects the manure into the soil. That allows the manure to both better provide its nutrients to the plants and help prevent runoff that is often blamed as a contributor to harmful algal blooms (HABS) on lakes throughout Cayuga County.

Part of why the Fessenden's farm was selected for the tour is because it's among several farms in the county that serve as an ideal model for best management practices, Cornell Cooperative Extension Dairy Resource Educator Judy Wright said.

In addition to their manure spreading technology, the Fessenden's also utilize a number of methods to minimize nutrient loss recommended by the Cayuga County Soil and Water Conservation District, which helps landowners of all kinds find ways to do so, such as buffer strips of thick vegetation at the edge of fields.

“We all need to work towards improving water quality and in the agricultural sector we're doing as much as possible to help the situation,” Ronda said.

Soil and Water District Nutrient Management Specialist Brian Hall said nearly all the dairy farms in the county, although all types of farms experience nutrient loss, take steps to manage the process and minimize the impact.

“You can't be a bad manager and operate in this economy,” Hall said.

As a farm with more than 300 cows, the Fessenden Dairy is required by the state to have a Concentrated Animal Feeding Operations (CAFO) nutrient management plan. Part of that plan means careful monitoring and soil analysis of the fields to determine how much manure and other fertilizer needs to be applied in a specific spot.

“We don't just put it on to get the pond empty,” Ronda said.

Ziehm said the tour was the first of its kind the agency had held, and they hoped to hold more in the future to encourage a dialogue between farmers and their neighbors.

Fessenden Dairy in King Ferry utilizes R & B Alternative Solutions of Genoa for their specialized equipment to "intimately" mix liquid manure into the soil. The dairy held a tour Friday to explain its best practices.

A hose hustler, left, and hose cart, right, are used to move the tubing used to pump the manure around the fields and away from obstacles.

One of hundreds of cows at the Fessenden Dairy in Kings Ferry, which hosted a tour on the process of the manure cycle in dairy farming.