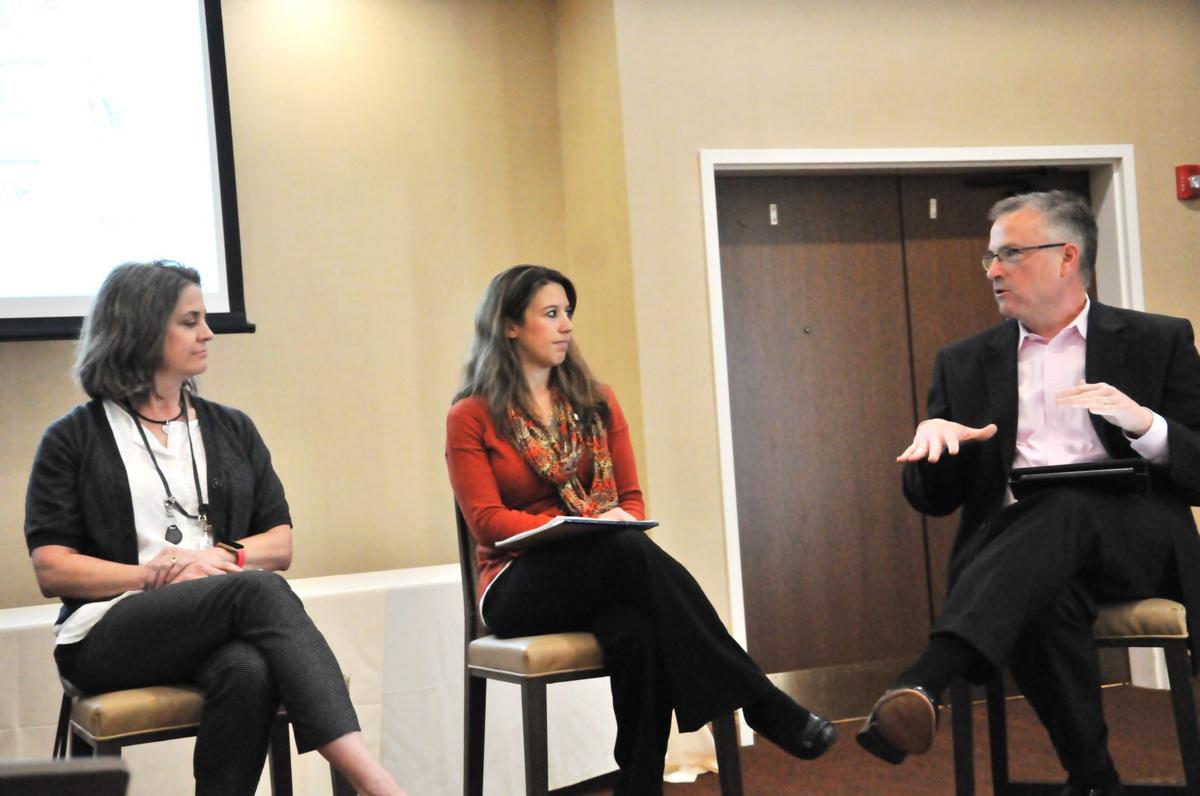 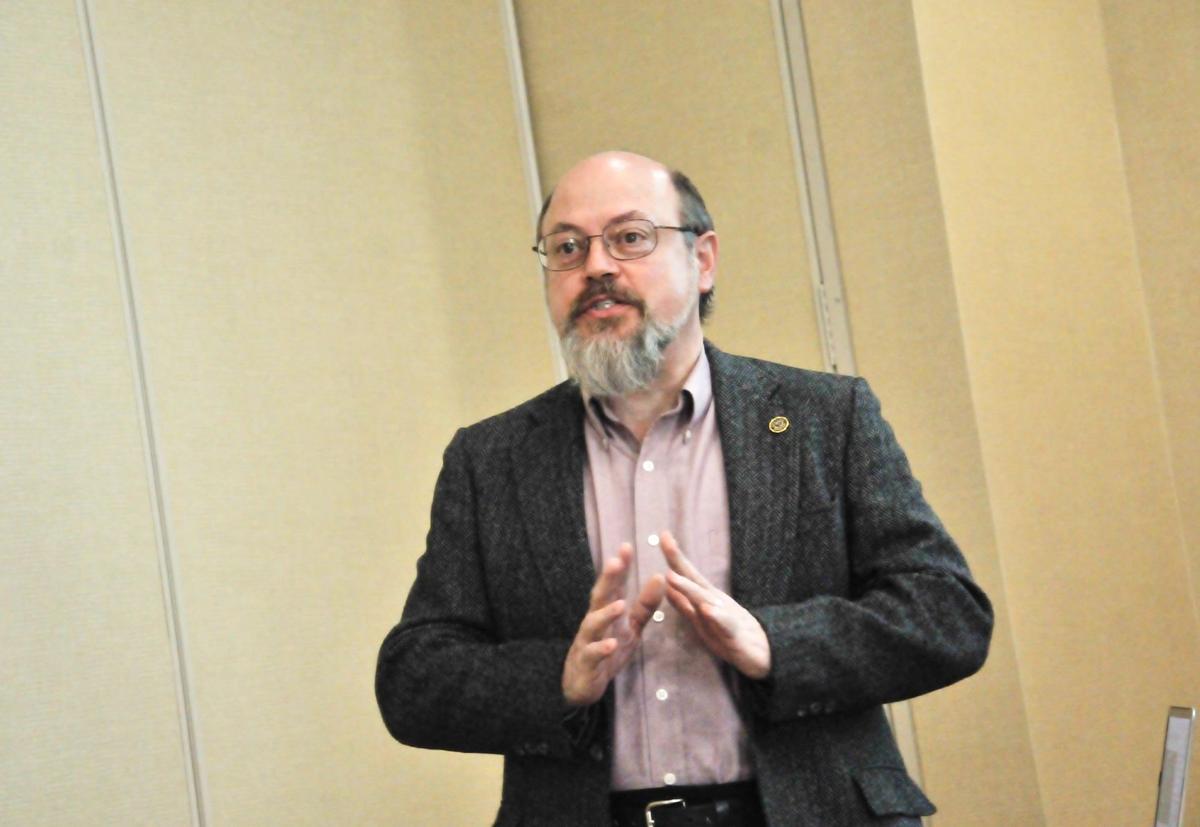 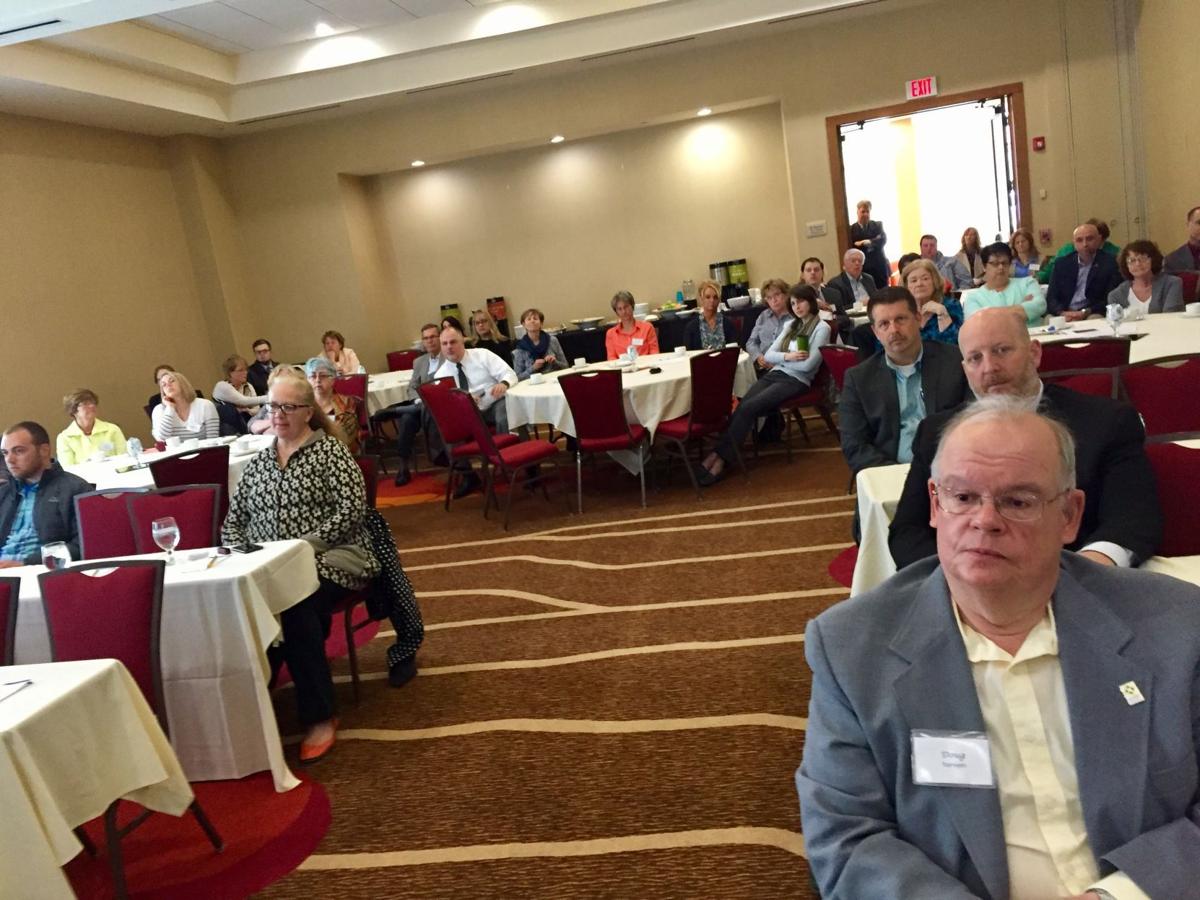 Audience members listen to the Wednesday Morning Roundtable about water quality issues on April 19 at the Hilton Garden Inn in Auburn.

Bruce Natale, environmental engineer for Cayuga County, said microcystis blooms, also called blue-green algae or cyanobacteria, have been present in Owasco Lake since at least 1912. They spurred the city, he said, to build its water treatment plant in 1917 and to purchase hundreds of acres in 1918 at the southern end of the lake, now known as the Owasco Flats.

It was a scary answer, Natale admitted, to Seymour Library Director Lisa Carr's question at the Wednesday Morning Roundtable held at the Hilton Garden Inn. Carr wondered whether testing for microcystin was new because of the science available, or new because it was new in the lake.

"It's not a new issue," Natale said. "I think we were one of the first ones to test raw drinking water and treated drinking water for it. I think it's going to be much more widespread in New York this coming summer where we're actually getting detections in drinking water systems. It may have been, it may be happening in low levels at lots of places already. It's one of those times where science has caught up though, and it's going to look like things are getting much worse."

Joining Natale to discuss water quality issues in the Finger Lakes were Cayuga County Health Director Kathleen Cuddy and Aimee Clinkhammer, the watershed coordinator for the state Department of Environmental Conservation's Finger Lakes Water Hub. Clinkhammer was the first hire for the hub created in October, and she said the team will likely be complete by the end of next week.

While the harmful algal blooms may have been occurring for more than a century in Owasco Lake, and potentially other lakes in the region, Clinkhammer said they do appear to be getting larger and more toxic. Microcystin is a particularly nasty toxin because it can cause liver and kidney failure as well as reproductive problems. Symptoms can include headaches, vomiting, diarrhea, blistering around the mouth, sore throat, dry cough and pneumonia, according to the U.S. Environmental Protection Agency.

The toxin is not regulated by the EPA, but the federal agency does have a health advisory guideline it recommends, which the state Department of Health and the Cayuga County Department of Health have been referencing for their tests. Cuddy said the department and the state have been even more conservative with testing than the federal standards, and the department has been working with towns and villages on emergency response plans should a "do not drink order" be issued. The city is also working to install a temporary treatment method by the beginning of July, Natale said. Blooms typically begin to appear in late summer when the waters are warmest.

One of the great mysteries about blue green algae, which was one of the first living organisms to inhabit the planet, is what causes a bloom to be toxic. Because it's impossible to tell whether toxins are present without a water quality test, Clinkhammer said the DEC has a blanket recommendation of staying away from all blooms. Part of the effort of the new hub, she added, will be to determine why some blooms have microcystin and others don't.

While the focus of the round table was on Owasco Lake, Natale, Clinkhammer and Cuddy said Cayuga Lake, Lake Ontario and other area water bodies are battling with issues, too. For example, Cayuga Lake is tackling hydrilla, an invasive species once thought to be confined to the southern end of the lake but recently found as far north as the village of Aurora.

When asked what people can do to help take care of their lakes, Cuddy said to get involved. With multiple watershed organizations and multiple public comment opportunities, there are plenty of ways for locals to be good stewards. Besides that, residents can be aware of the fertilizer they use, avoiding those with phosphorous or nitrogen. People can report algae bloom sightings to the Owasco Lake Watershed Inspection Program, and if there are issues on Cayuga Lake, Cuddy said there are DEC hotlines to call and report information.

"You don't have to live along the lake to care about the water," she said. "We know that water is so elemental. We all need to play a role in protecting it."

OWASCO — When Gov. Andrew Cuomo learned of the water quality issues affecting Auburn-area communities served by Owasco Lake, he was moved to act.

AUBURN — The Finger Lakes Water Hub has expanded from one staff member to two.

AUBURN —  From about 1955 to 1985, families and service members at the U.S. Marine Corps Base Camp Lejeune in North Carolina were exposed to d…

Proposed Auburn algae toxin treatments could cost up to $15 million

The cost of installing blue-green algae toxin treatments to the city of Auburn's plant will likely cost between $1.5 million and $15 million, …

AUBURN — The state's new task force addressing water quality in the Finger Lakes is taking shape, and it's all starting with Aimee Clinkhammer.

With snow and ice on the brain, harmful algal blooms seem a distant problem for a warmer time.

AUBURN — While Cayuga County's focus has been on blue-green algae in Owasco Lake, Cayuga Lake is sprouting its own problem — hydrilla.

SENECA FALLS — A local effort to eradicate a 27-acre patch of hydrilla in Cayuga Lake is being supported by U.S. Sen. Chuck Schumer.

Hydrilla patch in Aurora threatens to spread with no funding

Cayuga Lake has approximately 27 acres of hydrilla mapped off the shore of Wells College in the village of Aurora, but there's no money to do …

The "bully of the water world," has made its way to Cayuga County. Hydrilla was spotted earlier this month on Cayuga Lake in Aurora by the Cay…

AUBURN — Bruce Natale is hopeful that the latest delay in an approximately five-year endeavor to restore the Owasco Flats is coming to an end.

The state Department of Environmental Conservation is testing a new mapping technology displaying water quality information, and the Owasco La…

SENNETT — About 4.5 miles long and touching both Onondaga and Cayuga counties, Cross Lake sometimes gets forgotten, downstream of six of the l…

OWASCO — A countywide hiring freeze running through July 1 will not include an exception to create and fill two new social services positions.

The Finger Lakes Water Hub is fully staffed, but the state Department of Environmental Conservation is not.

Save Owasco Now, an organization focused on protecting the water quality of Owasco Lake, will host its next meeting with Aimee Clinkhammer, wa…

U.S. Army Corps of Engineers to talk hydrilla at Aurora board meeting

Representatives from the U.S. Army Corps of Engineers plan to attend the village of Aurora's board meeting Wednesday night to answer questions…

AURELIUS — A five-page, outdated and ill-defined document listing the rules and regulations of the Owasco Lake watershed appeared to be a myst…

'Nobody is going to go without water': Cayuga County creates emergency plans for algal toxins

With harmful blue-green algae bloom season around the corner, municipalities who get their water from Owasco Lake have created emergency plans…

SENNETT — It's been 45 years since Owasco Lake has had flows as high as they were this past weekend after a rainstorm flooded parts of Cayuga County.

The village of Aurora will host a meeting Thursday night regarding hydrilla in Cayuga Lake.

AURORA — Treatment of hydrilla, a highly invasive aquatic weed found near the village of Aurora on Cayuga Lake, is wrapping up this year with …

Audience members listen to the Wednesday Morning Roundtable about water quality issues on April 19 at the Hilton Garden Inn in Auburn.