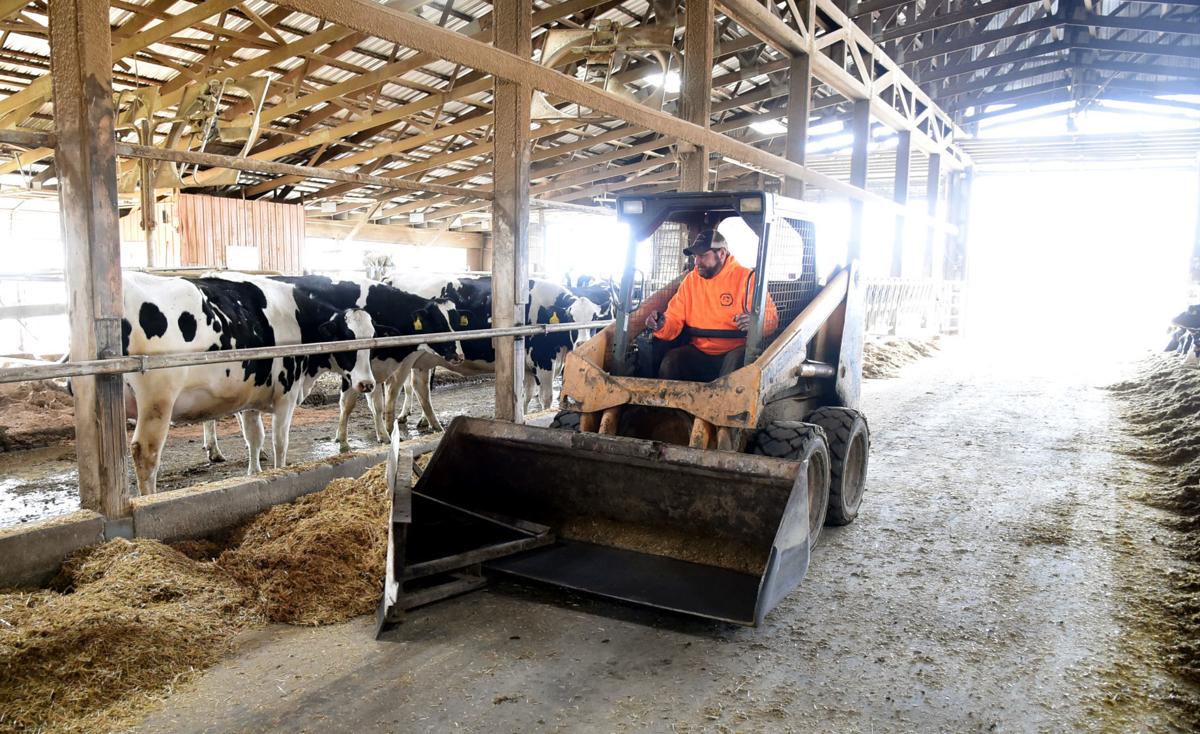 Union Springs dairy farmer Jon Patterson worries about the health of his workers to help milk the cows daily during the coronavirus pandemic. 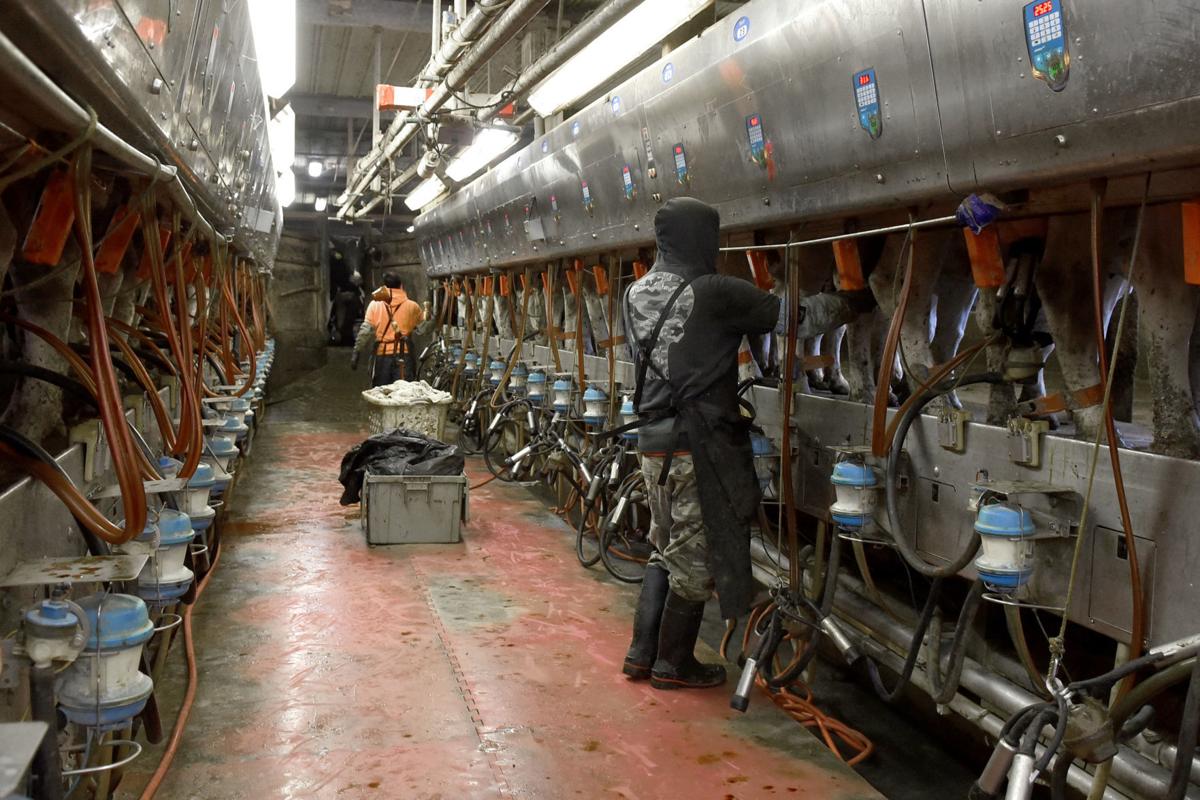 Farmhands work in the milking parlor on Patterson Farms in Union Springs. Dairy farmer Jon Patterson worries about the health of his workers to milk the cows every day during the coronavirus pandemic. 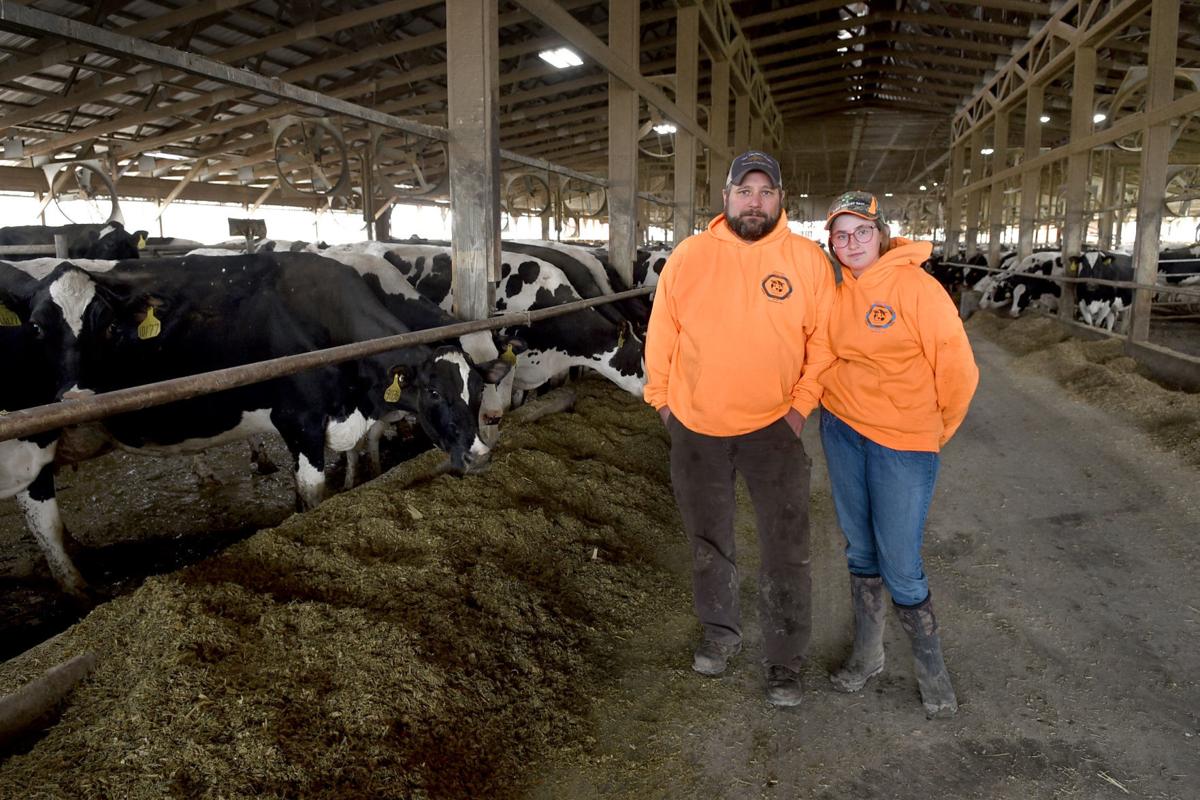 Union Springs dairy farmer Jon Patterson, with his daughter Reilley, worries about the health of his workers during the coronavirus pandemic. 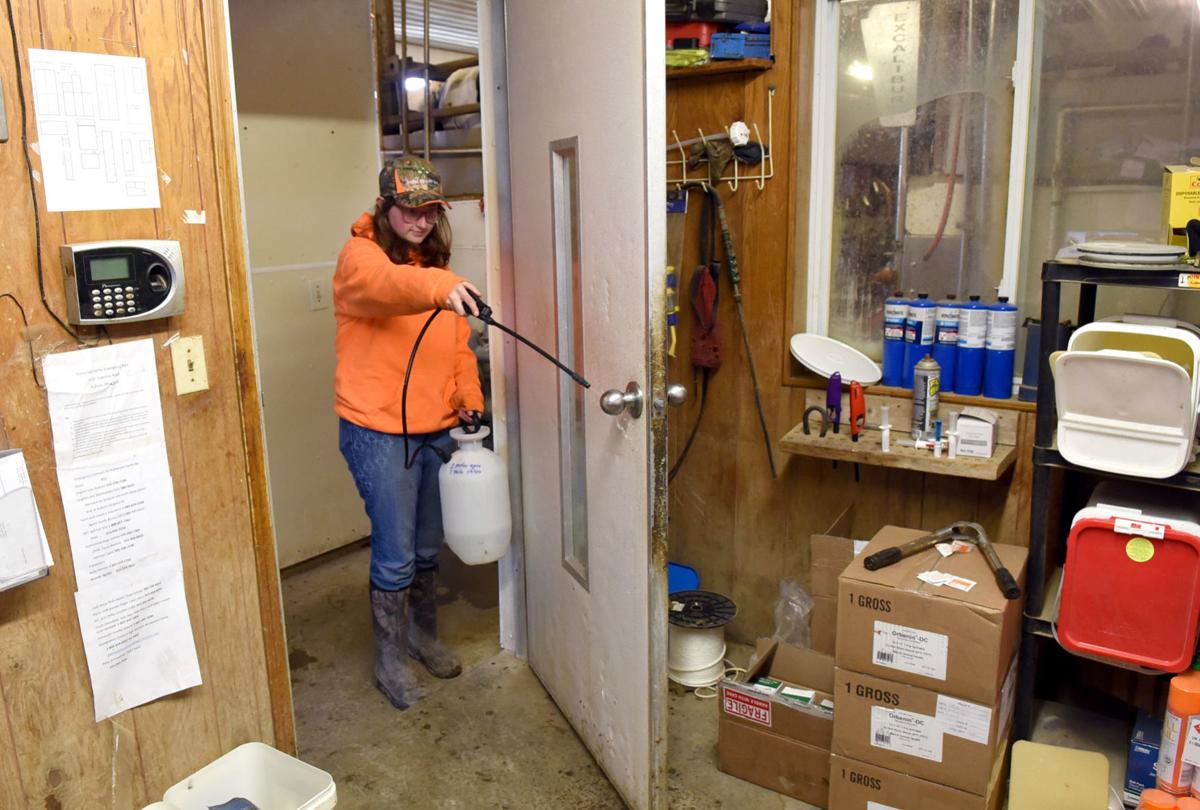 Reilley Patterson disinfects door knobs in the milking barn on Patterson Farms in Union Springs. Farmers worry about the health of their workers during the coronavirus pandemic.

Jon Patterson said he wasn't surprised farms were designated essential businesses that didn't have to reduce their workforce in light of the coronavirus outbreak in New York.

Patterson, who runs Patterson Farms in Aurelius, said he appreciates the state deeming businesses such as his dairy farm essential.

"We had to be (considered essential.) It's just inconceivable to believe that it couldn't be," he said. "Things run 24 hours a day, seven days a week and to think we can just shut them off or stop, it just doesn't make sense. How would we feed the world if we can't produce milk or produce beef or anything?"

The business, which has 28 regular employees plus family, has taken extra precautions due to the respiratory illness. Additional sanitation has been added to working stations, Patterson said, and equipment has been wiped down. The business has been trying to stock up on extra products. He has been worried about the possibility of staff having to go into quarantine and what that would mean for others on the farm, but that hasn't happened so far. In any case, there aren't extra employees who could simply fill in.

"You can't turn them off. It's not like we can just stop feeding the cows or stop milking the cows. This has to happen every day," he said.

There has been economic uncertainty on what the long-term effects of the pandemic may be, Patterson said, but the business has been stable so far. He expressed concerns about the effects the outbreak might have on the local economy when "people are laid off and not working for who knows how long."

"We're in a spot we've never been before, and there's some uncertainty about how quick things will rebound and get back into whatever the new normal is," he said.

Patterson isn't the only Cayuga County-area farmer dealing with uncertainty. Ray Lockwood, president of the Cayuga County Farm Bureau and co-owner of an Aurelius dairy farm with his son, said the pandemic has brought some challenges. The business has been making sure those on the farm, including its three employees, keep their clothes clean, wash their hands and have done their best to make sure they are healthy. Nobody has been shaking the hands of delivery or equipment service people who have come in.

Dairy price projections were good at the beginning of the year but have since dropped, Lockwood said, thanks to issues such as "the scarcity of product and people not being able to get out and shop and just the general panic." He said projections for products such as beans and corn are also not as favorable as they had been at the start of 2020. Going to a local machinery dealer is a lot more difficult than it used to be, he said, since people have been required to call ahead, adding that some parts stores aren't open and some parts don't have the same availability they used to. He said he has heard from other farmers about those same machinery issues and that others have been taking the same safety precautions.

Mark James, field adviser for the Cayuga County Farm Bureau and five other counties, said the New York Farm Bureau has provided daily updates from the state on COVID-19 and has given recommendations on how farmers should handle stopping the spread of the illness. He said social distancing in the face of the pandemic can sometimes be challenging in a confined space such as a milking parlor "but they are adapting to that."

Not all of the recent developments have been bad, James said, since there has been a high demand for meat, and farmers who sell meat directly have seen good business. He noted craft beverage business, wineries and others are able to currently do takeout and delivery.

Lockwood said he believes the crisis has given people new insight into the importance of local farms and that people have gained a better understanding of where the food on grocery shelves come from.

"They find out that it's really coming from an actual farm and not just from the shelf," he said.

More online and inside

• Our view: Late April election is a bad idea, A4

• The daily coronavirus briefing brings you the key developments from around the nation and world, A6

• COVID-19 closures, cancellations and other community organization, business and government updates in the Cayuga County area, A7

• Sciria: Appreciate our unity as sports take a pause, B1

More than 80,500 unemployment insurance claims were filed in New York last week after businesses shut down or scaled back because of the COVID…

Union Springs dairy farmer Jon Patterson worries about the health of his workers to help milk the cows daily during the coronavirus pandemic.

Farmhands work in the milking parlor on Patterson Farms in Union Springs. Dairy farmer Jon Patterson worries about the health of his workers to milk the cows every day during the coronavirus pandemic.

Union Springs dairy farmer Jon Patterson, with his daughter Reilley, worries about the health of his workers during the coronavirus pandemic.

Reilley Patterson disinfects door knobs in the milking barn on Patterson Farms in Union Springs. Farmers worry about the health of their workers during the coronavirus pandemic.