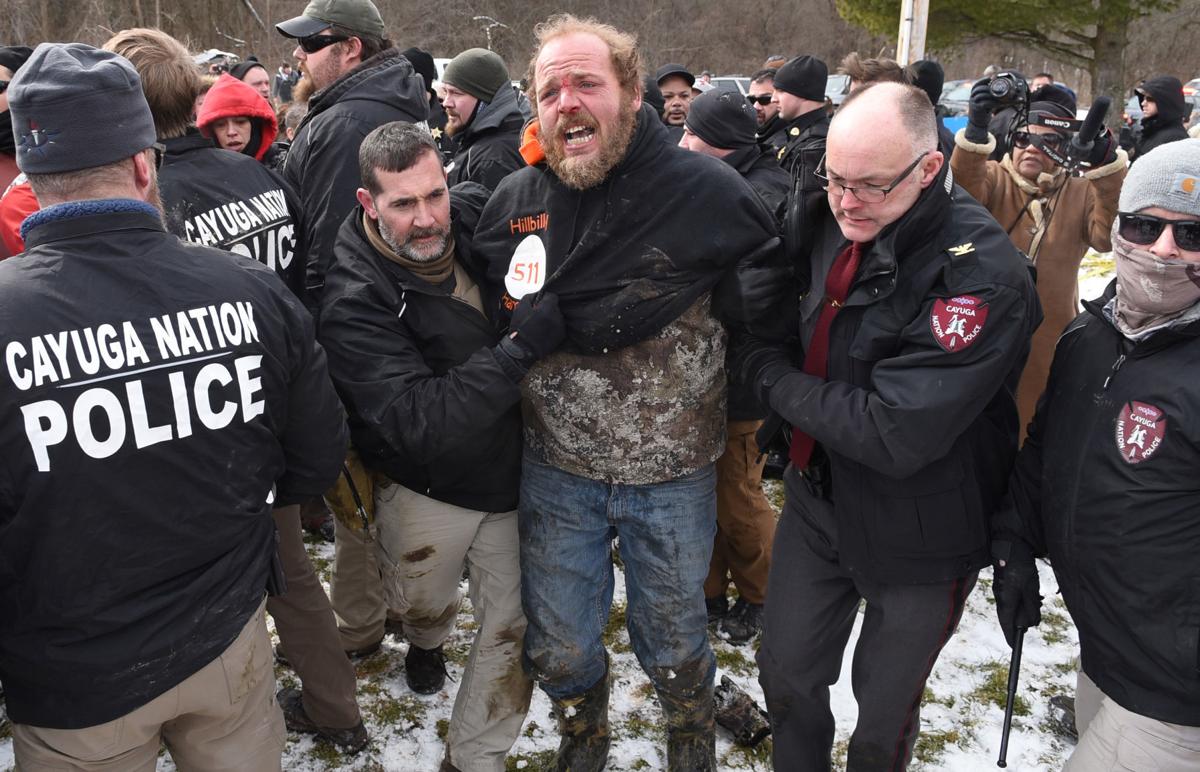 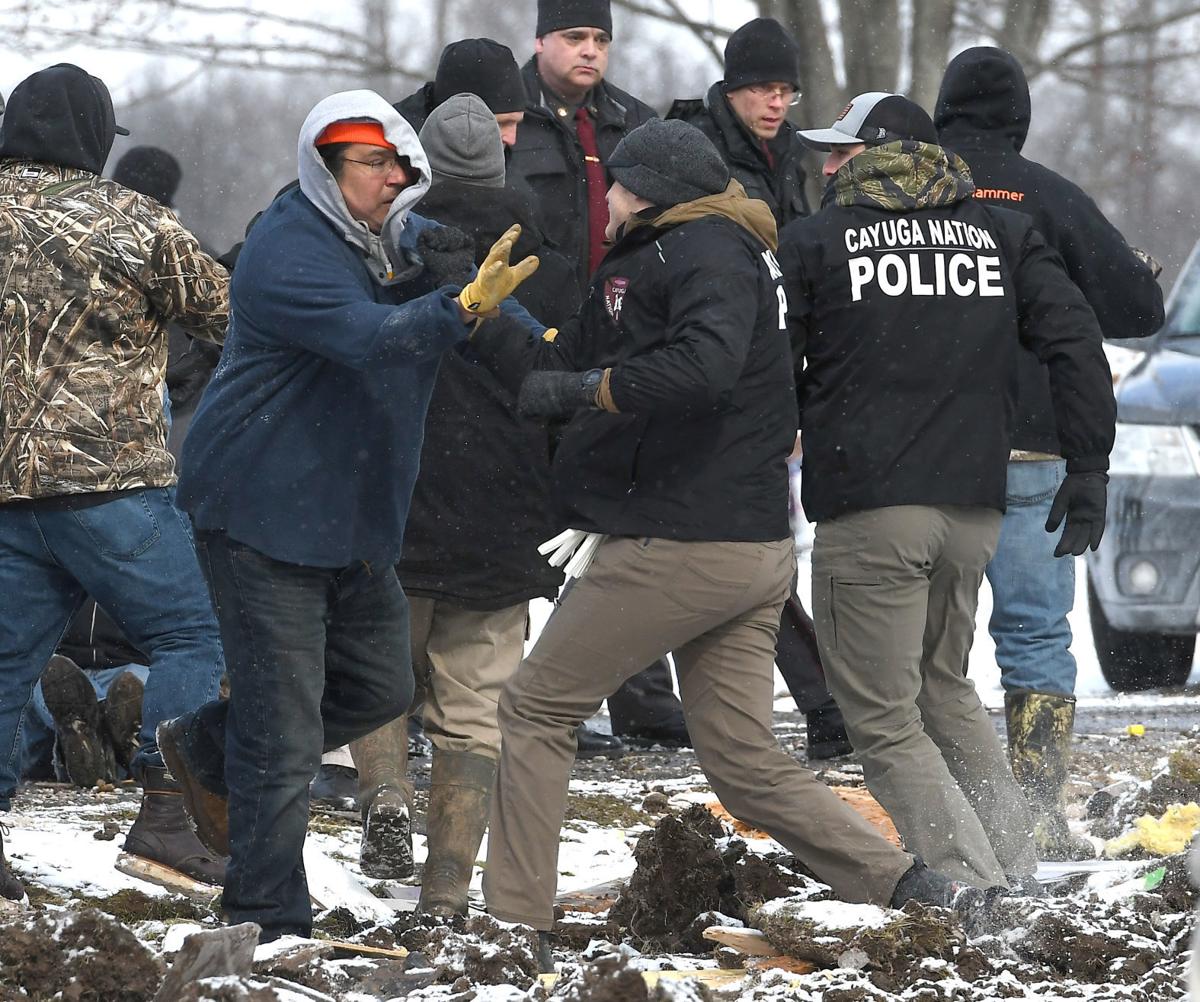 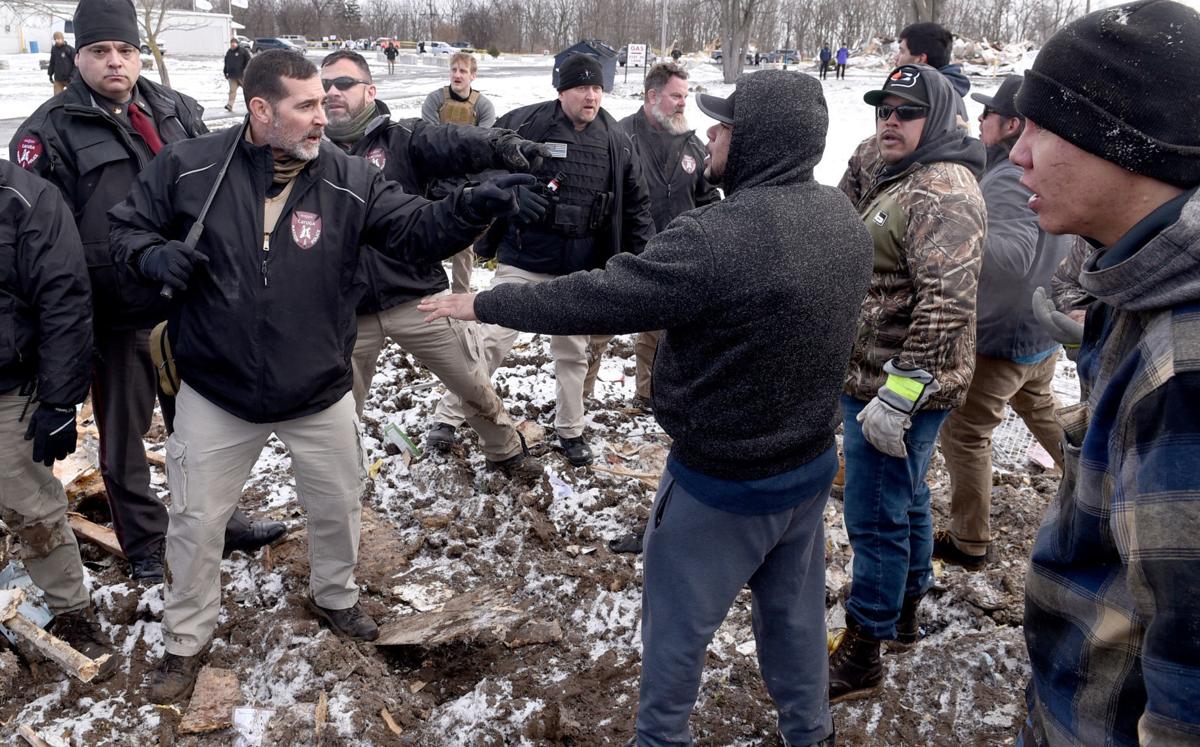 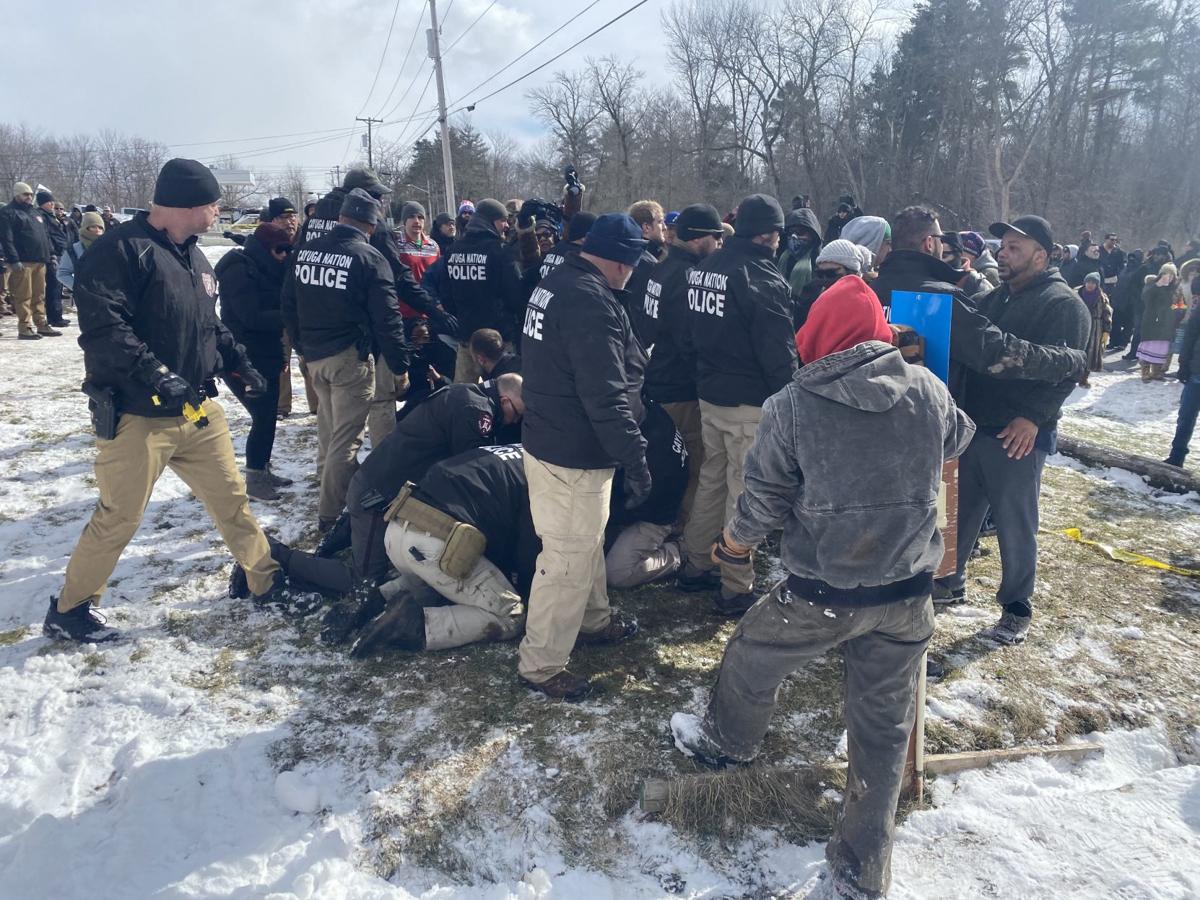 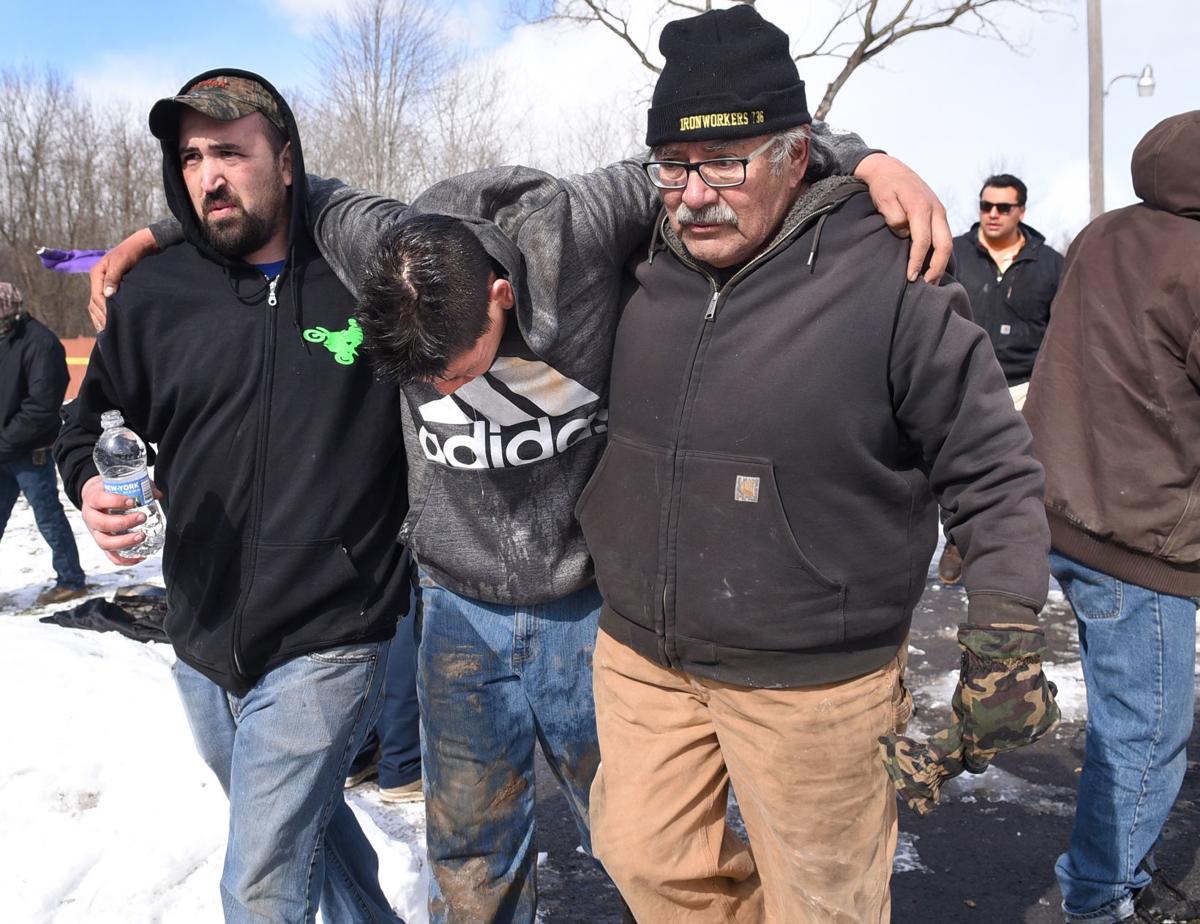 The press conference took place on a road off Route 89 in Seneca Falls adjacent to the property that was previously controlled by a Cayuga Nation group that doesn't recognize Clint Halftown, the nation's federal representative, as the nation's leader. Halftown's Cayuga Nation Council ordered its newly created police department to raid the site on Feb. 22 and take back the properties. It also demolished several structures, including a gas station/convenience store, schoolhouse, day-care center and sugar shack.

The seven Cayuga Nation chiefs who held the press conference oppose Halftown, and they brought supporters to Saturday's event from other American Indian nations that make up the Haudenosaunee Confederacy.

Saturday's press conference was called by the chiefs to address the recent incident, but after they were done speaking to the crowd that had gathered, the group crossed caution tape and walked onto the property. They were immediately confronted by a large group wearing Cayuga Nation Police jackets, and fighting broke out.

Punches were thrown and people were dragged to the ground. The fighting lasted about 10 minutes before the nation police used pepper spray to disperse the crowd.

After the pepper spray was deployed, people with their faces stained orange from the spray staggered around, arms flailing, shouting for water as they struggled to see. People were given water bottles to douse their eyes.

Throughout the altercation, a small presence of local and state law enforcement was off to the side, monitoring the situation but not intervening. A section of Route 89 was closed to traffic as a result of the situation.

On Saturday afternoon, the Halftown-led council announced that its police force arrested three people at the scene: Austin Glass, an Oneida Indian nation member, charged with damaging a Cayuga Nation marked police vehicle; Hajenhne Brown, a member of the Onondaga Nation, charged with trespassing and assault on a Cayuga Nation police officer; and Travis John, a Seneca Nation member charged with assaulting police. It also said a non-Indian person at the scene, Charles Bowman, assaulted a nation police officer and said "his prosecution has been referred to the Seneca Falls Police Department," according to a press release.

The Seneca Falls Police Department said that it had established a command post in anticipation of the gathering and responded to the scene after receiving reports of physical altercations.

According to a news release, officers from multiple law enforcement agencies responded and "diffused the altercations and separated the opposing sides. Police remained on scene to keep the peace until tensions were de-escalated and attendees left the area."

After the fighting ended, protesters screamed and hurled obscenities at the group with Cayuga Nation Police uniforms. Two people had blood on their faces after the fighting stopped. No medical personnel were at the scene.

The SFPD said that no local or state law enforcement agencies took anyone into custody and that anyone wishing to provide information is asked to call the department (315) 568-4850.

The Halftown council said one of the Cayuga Nation police officers was taken to the hospital with unspecified injuries, and that additional charges may be brought. The council has established its own police force and court system in recent years, and has a contract with a Pennsylvania jail for holding defendants.

The authority of this police force isn't clear. In December, the U.S. Attorney's Office for the Western District of New York had warned lawyers for both factions within the Cayuga Nation not to escalate their dispute.

During the press conference on Saturday, the chiefs talked about their view that the Seneca Falls site belongs to the Cayuga Nation as a whole, and is not a place that Halftown can unilaterally control.

Halftown has labeled the group that has opposed him and run the operations at the Seneca Falls site as "trespassers" who have been breaking tribal law and stealing from the nation's citizens. A lawyer for the opposition group has called the Halftown council's actions "viciously unlawful."

Lee Alcott, one of the attorney's for the Halftown-led Cayuga Nation Council, issued a statement on behalf of the council early Saturday afternoon condemning the actions of the opposition group:

"This morning our Nation, Officers of our Police Department and others, including members of state and local law enforcement, were the victims of a group of vicious criminals, including members of the Mohawk and Onondaga nations, as well as other Indians who traveled from Canada, for the sole purpose of creating chaos on our property and inflicting serious injury. As you know, we had regained possession of these properties peacefully and without injury and hoped to maintain the peace, but peace has never been the way of those who continue to oppose our lawful government.

"We had been informed that certain members of the Cayuga Nation intended to stage a protest at our property, and we were prepared to honor that protest in a respectful manner. Instead, however, it looks like this group put out a call to other Indian nations, including the Onondaga Nation, who have no business in our affairs, and solicited their help in bringing what are nothing more than thugs to our reservation. We are grateful for the assistance of local law enforcement who clearly saw these people for the violent criminals they are and we call upon the so-called 'Unity Council' and their attorney to stop this once and for all before someone is more seriously injured or worse."

Joe Heath, an attorney representing the opposition group, countered with his own statement later Saturday:

"This morning, Halftown's all non-indigenous police force attacked Cayuga and Haudenosaunee citizens as they peacefully came onto the properties which Hafftown has leveled. These indigenous people have a much superior right to be on Nation property than the mercenaries who attacked them.

"This violence by the mercenaries is a continuation of their vicious raid a week ago, when they put guns to people's heads, handcuffed them and forced them out of the buildings, so that they could destroy them. In addition their destruction of commercial properties, Halftown ordered the destruction of the Longhouse, a cultural and spiritual center, a day care center, and six cabins, from which the residents were forced at gun point.

"For Halftown to claim that Onondaga and Mohawk citizens were trespassers, while hiding behind an all-white, hired police force is an absurd Orwellian twist of reality."

Heath later said that Charles Bowman had been kicked in the face by Cayuga Nation police while trying to defend a woman. He was not charged, Heath said, "as those police have no jurisdiction over non-Indians."

UNION SPRINGS — Galvanized by what they said are the morally wrong actions of the Cayuga Nation Council, a small group of nation citizens and … 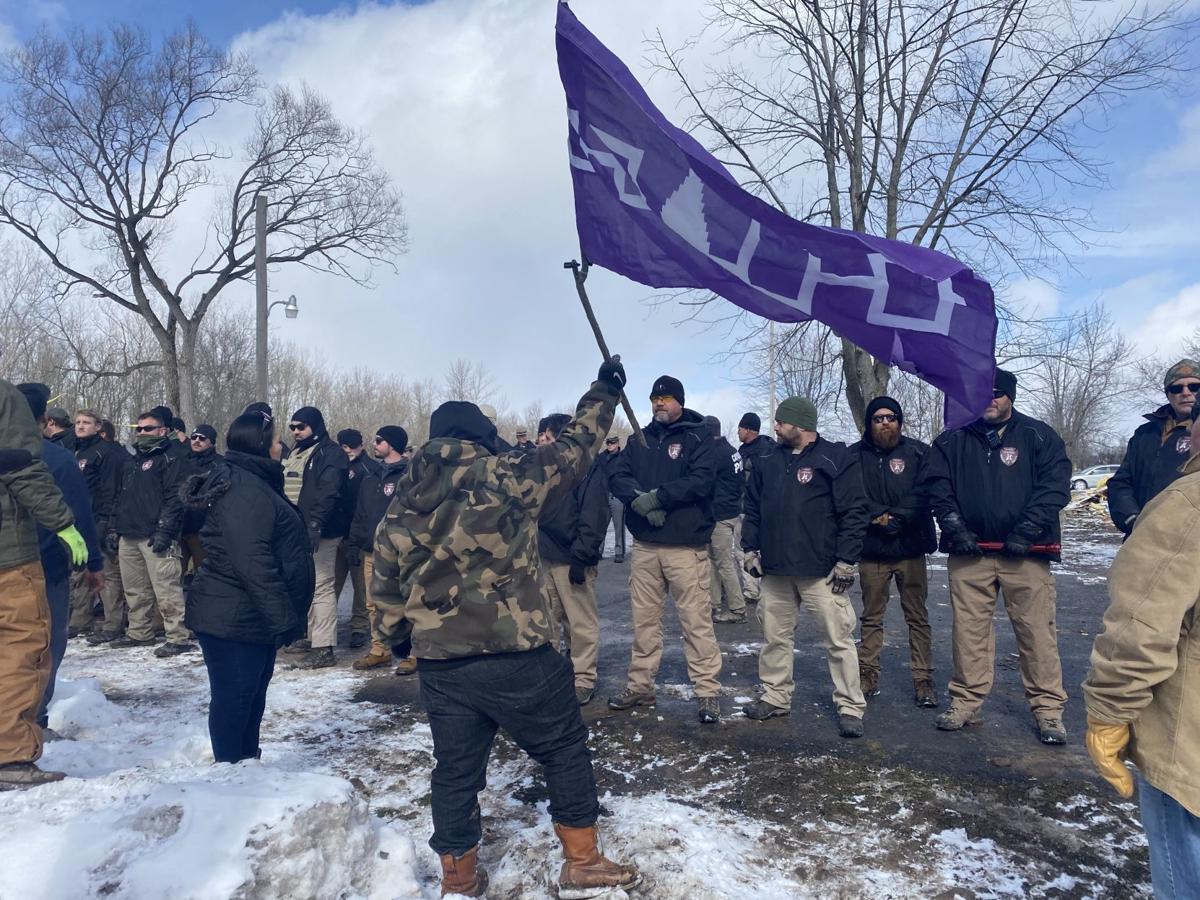 Cayuga Nation Police Department officers guard the property in Seneca Falls seized Feb. 22 by the Clint Halftown-led Cayuga Nation Council from the opposition group that had controlled the site since 2014.