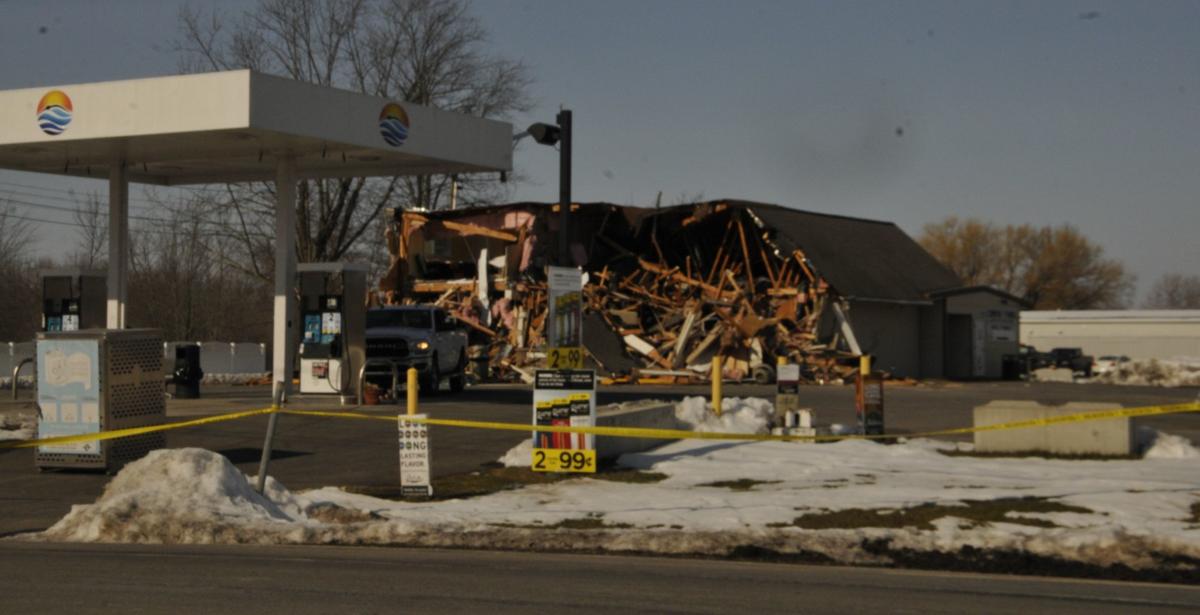 The Trading Post on Cayuga Nation property in Seneca Falls prior to Saturday's destruction.

Claiming it was enforcing tribal law, the Cayuga Nation Council under the direction of Clint Halftown had its newly created police department raid properties in Seneca Falls early Saturday morning that had been under control of a group that disputes Halftown's authority.

In the process, at least seven people were temporarily detained and one person is facing charges, but nation officials said no one was injured. In addition, the council overnight demolished several buildings in the area — including a convenience store, day-care center, schoolhouse and sugar shack. Since 2014, those properties had been under control of a group of nation members or supporters that have referred to themselves as the nation's tradition government.

The overnight move comes three months after a state Court of Appeals decision that declined to force the traditional government to turn over nation-owned properties under their control in Seneca County and to pay damages. A lawyer representing the traditional leaders blasted the Halftown council action, calling it "a viciously unlawful act."

The Halftown council controls the Cayuga Nation commercial enterprises in Union Springs. Given the actions that took place in Seneca Falls this weekend, Cayuga County Sheriff Brian Schenck on Saturday morning said law enforcement has increased patrols in the area of those properties.

"I'm concerned with the possibility of retaliation," he said. "My No. 1 priority is making sure the people in Union Springs are safe."

Schenck said law enforcement had not been contacted directly by the Cayuga Nation ahead of the raid in Seneca Falls, but had received "intelligence" that something might be happening.

The Halftown-led council told The Citizen in an email on Saturday afternoon that it "alerted local and state authorities to its planned enforcement activities in advance and coordinated its law enforcement activities with those agencies to the greatest extent possible and in keeping with the federally recognized status of the Nation’s Police Department."

The Halftown council in recent years has been recognized by the U.S. Department of Interior as the official leadership of the nation, following an election process that was orchestrated by his council over the objections of traditional leaders. The Halftown council cited the federal recognition, along with a letter the Interior Department's Bureau of Indian Afairs sent in June to Seneca Falls' police chief, as the basis for taking its actions in Seneca Falls.

"Despite this confirmation by the Cayuga people of their government, those who had seized the Cayuga Nation properties in 2014 refused to leave. They continued to operate Cayuga Nation businesses keeping the money for themselves, and refusing to provide any accounting for how the money was spent," a Cayuga Nation press release issued Saturday morning said.

"Today, the Cayuga Nation has employed tribal law to detain persons who have violated that law, and the Nation has retaken possession of its properties."

The press release said Cayuga Nation police found substances "suspected to be methamphetamine and marijuana, along with drug paraphernalia, guns, and ammunition." Six people were released without charges and a seventh individual was charged with possession of a substance suspected to be methamphetamine. That person, who is male but whose name was not disclosed, was arraigned by Cayuga Nation Judge Joseph Fahey and released on his own recognizance. The defendant will be handled by the recently created Cayuga Nation court system. The defendant has the right to be represented an attorney of his choice or by one provided by the nation.

The demolition of the buildings was done "to eliminate certain public safety issues, and it does not want these buildings to become a target for any further friction in the community going forward," the press release said.

The Halftown-led council said it issued a demolition order under the tribe's health and safety ordinance. "There are no further demolition orders pending and the Nation has no further planned enforcement activities at this time," it said in an emailed response to questions from The Citizen.

“This is not Cayuga Nation law and these clearly unlawful acts of destruction of nation property were in complete violation of the Great Law of Peace," he said. "The traditional chiefs and clan mothers have said for years that Halftown is lawless and that his newly concocted 'government,' which was created with the illegal, back-room assistance of the BIA and its eastern regional director, was illegitimate, with no defined process or procedures.

"This is a viciously unlawful act, in complete violation of Cayuga Nation law, carried out by a mercenary 'police force' — all white and no Cayugas. What kind of government destroys a day care center for political reasons?"

"It is a very sad day for the Cayuga Nation and its scores of citizens whose jobs were just bull-dozed.”

Early Saturday afternoon, members of the Cayuga Nation Police could be seen patrolling the area on foot behind caution tape, occasionally cracking jokes and talking among themselves. A few motorists stopped off the side of the road to take pictures of the rubble, despite the nearby signs saying stopping at any time was prohibited. At one point a man in a car yelled "It's a terrible thing they're doing!"

The overnight action at the Seneca Falls on Friday followed an announcement Friday by the U.S. Department of Housing and Urban Development on housing assistance funding for Native American tribes, which included a $287,948 grant for the Cayuga Nation.

In a response to a request for guidance from the Seneca Falls Police Department, a letter from the federal Bureau of Indian affairs says the C…

With the deadline expired for filing an appeal in a lawsuit related to the Cayuga Indian Nation of New York leadership dispute, the faction le…

Following the establishment of its own police force, the Cayuga Nation has announced the creation of a new criminal court system to aid in the…

The Cayuga Nation has taken another step in establishing its own judicial system, as federal representative Clint Halftown and his council hav…

'Reclaiming their identities': Some Cayugas worry over fate of cultural programs in Seneca Falls

SENECA FALLS — The federal government has ended a years-long Cayuga Indian Nation of New York leadership dispute, but the move has further div…

The federal government has ended a years-long Cayuga Nation leadership dispute, but the move has further divided its people residing in Cayuga…

The Cayuga Indian Nation of New York is receiving nearly $90,000 in coronavirus relief funds to help with its low-income housing program, the …

The Trading Post on Cayuga Nation property in Seneca Falls prior to Saturday's destruction.