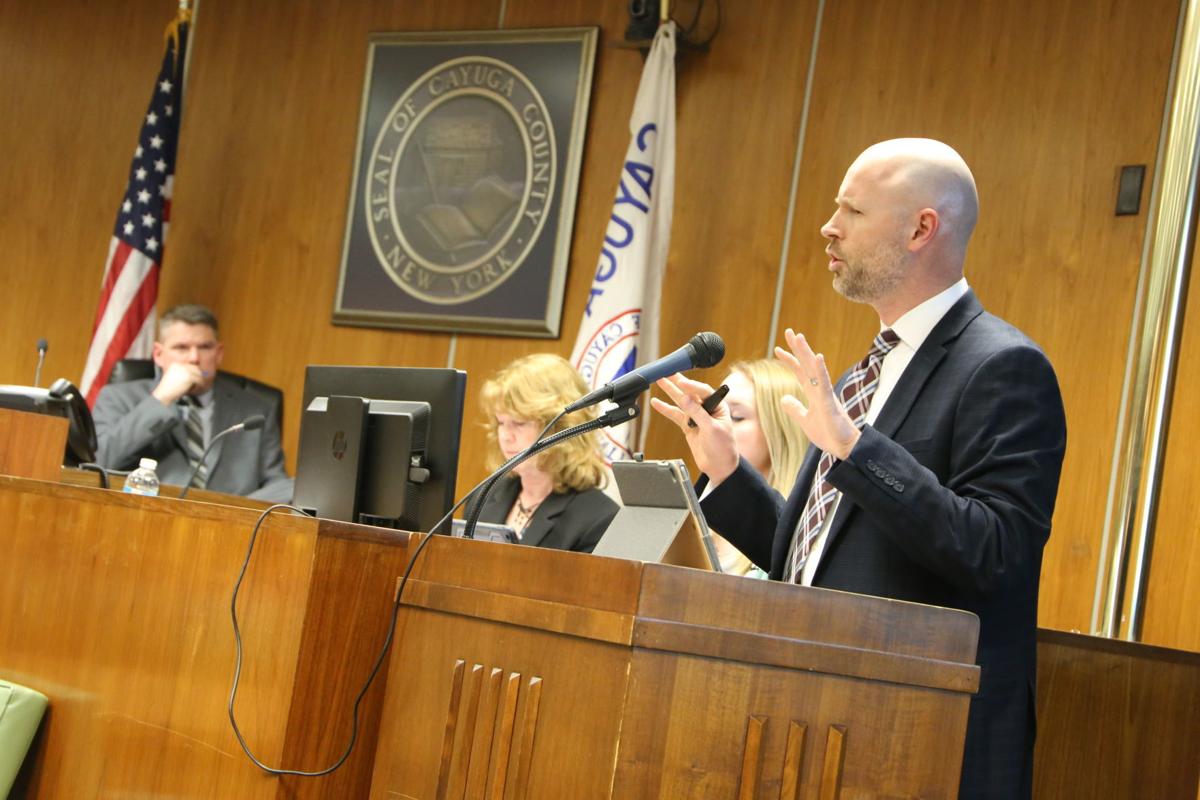 AUBURN — A consulting firm is recommending that Cayuga County make some significant investments in the coming years, such as adding a deputy county administrator, in order to improve local government.

Cayuga County legislators listened to a high level list of recommendations compiled by CGR at their Tuesday night meeting. The body hired the firm in June for $75,000 to study the county's current service structure and provide ways to improve it.

Joseph Stefko, president of the company, said while many of the recommendations have cost savings, about half will "require strategic investment." He kicked off an overview of those suggestions by telling legislators they should empower the county administrator and consider adding a deputy.

J. Justin Woods is the fifth person to hold the position since October 2006. He began in December. Stefko and his colleagues said the county needs to do better at clarifying reporting lines so the administrator remains informed. Legislators, he added, need to recognize the difference between governance and general county operations.

Stefko also suggested adding a finance department or budget officer, separate from the treasurer's office. According to CGR's report, "the Treasurer's Office does not have a formal role in the process of developing or managing the annual budget. ... Between the Administrator-as-Budget-Officer and a part-time budget director, the County's overall capacity to develop and administer the annual spending plan is limited."

CGR made multiple other broad suggestions that are broken down in its final report. They included things like conducting a comprehensive study of county employee salaries, updating the county's website, hiring a communications director, hiring more staff for the probation department, and merging highway, parks and trails, buildings and grounds and weights and measures into one department.

While not making a recommendation directly on the fate of the Cayuga County Office Building, Stefko said the county should look at a more coherent way of co-locating departments. Legislators have discussed building a whole new office building or renovating the existing structure at 160 Genessee St., Auburn. Both are costly propositions as the office building would need to undergo asbestos removal before any major work, but initial estimates show building a new building could cost twice as much as renovating.

Legislators didn't have very much to say on the report Tuesday night, but Chairman Patrick Mahunik said he would schedule a special meeting to delve into the report and see what made sense to start tackling.

• Legislators passed a resolution 13-1 to hold a public hearing on raising their salaries. Legislator Elane Daly was against it, and Legislator Tucker Whitman was absent.

Lawmakers have not received a raise since 2005 and they currently get $10,100 each. In order to change that, the county needs to pass a local law with the new salary amount. The resolution for the public hearing includes a draft local law, which offers a $15,000 salary. Most legislators were not married to that number Tuesday night.

Legislator Aileen McNabb-Coleman said she had a different idea of how legislators' salaries should evolve, and she didn't agree with the number drafted. But, she said, she wants to hear what the public has to say.

That was the flavor throughout the room, with several legislators saying they did not necessarily support an increase.

"I would encourage our constituents to make their voices heard," said Legislator Christopher Petrus.

According to the resolution, the public hearing will be held at the next full Legislature meeting, 6 p.m. Tuesday, April 24 in the Sixth Floor Chambers of the Cayuga County Office Building, 160 Genesee St., Auburn.

Our view: Time for the Cayuga County Legislature to walk the walk

As Cayuga County officials study the many recommendations provided by a consulting group for improving county government, one point that requi…

A special Cayuga County Legislature meeting canceled Wednesday due to a power outage has been rescheduled to 6 p.m. Monday, April 9.