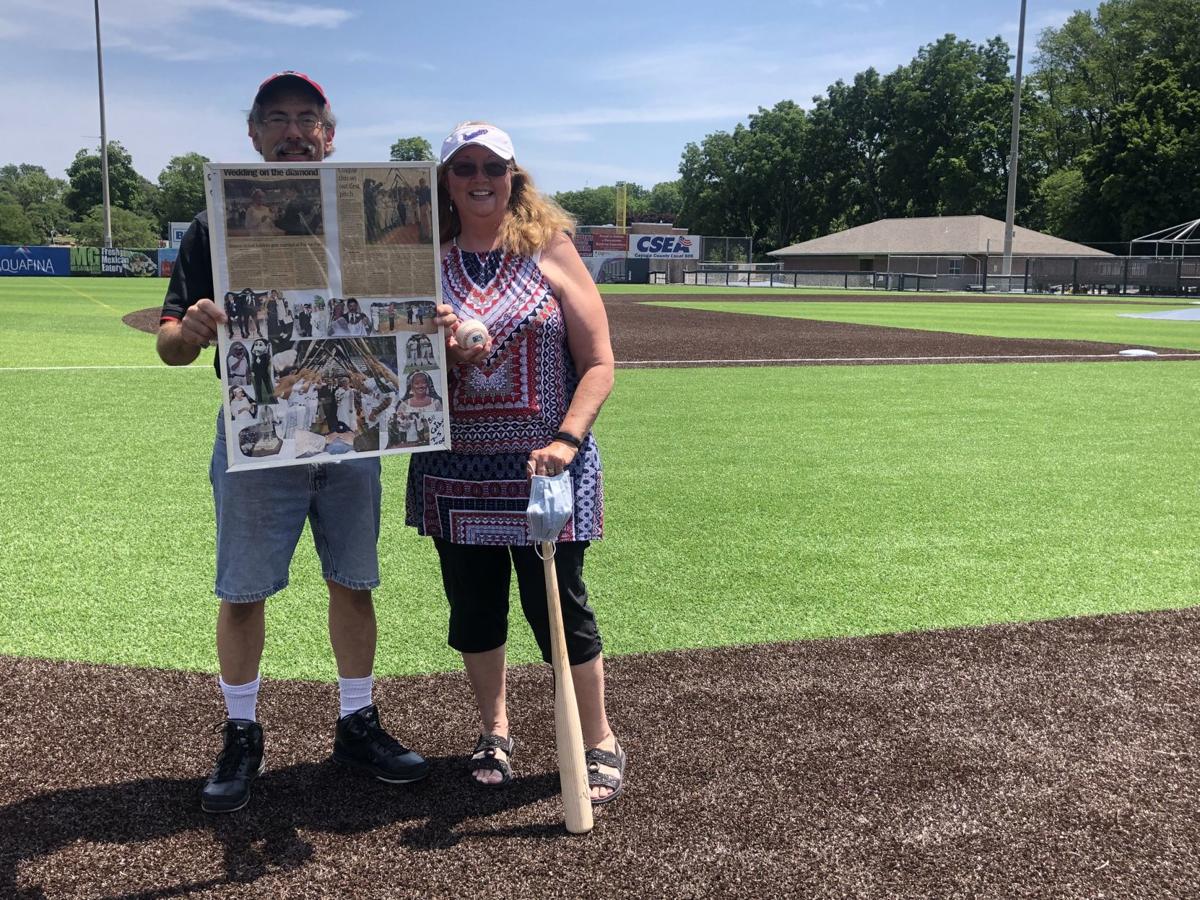 Bill and Cathy Techman display memorabilia from their 2003 wedding at Falcon Park. 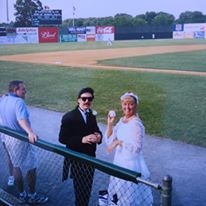 Bill and Cathy Techman on their wedding day at Falcon Park on July 5, 2003.

AUBURN — Like they do every year, Bill and Cathy Techman crossed the field at Falcon Park on the anniversary of their wedding.

The Techmans have thrown the first pitch of a home game at Falcon Park every year since they were married there on July 5, 2003, just before the season opener. They met Auburn Doubledays General Manager David Lindberg on the field on Sunday — which is their 17th wedding anniversary. But no baseball game followed.

The 2020 Minor League Baseball season was cancelled due to the COVID-19 pandemic. But, game or no game, the Techmans were going to throw their pitches.

Lindberg gave them each a ball, and they took turns throwing to him from the pitcher's mound. Cathy wasn't totally satisfied with hers. She said some years have been better than others for her technical ability.

Though the stands were empty on Sunday, Bill joked to Lindberg that almost 2,000 people came to his wedding. Sunday was just as bright and sunny as the day they got married, he said.

He and Cathy recalled how their friend announced members of the wedding party over the speakers as if they were part of the lineup. Once the ceremony was over, Bill thought the coach was trying to hurry him and Cathy off the field so the team could start warming up. But they were actually called up so the newlyweds could walk under their bats.

"That was awesome. I was ready to shed a tear," Cathy said.

Bill agreed it was a treat and a big surprise. "Among baseball fans, that's a big thing," he said.

For their honeymoon, they escaped to another favorite spot: Yankee Stadium.

In addition to being season ticket holders and members of the Double D Baseball Booster Club, Cathy and Bill host team members during the summer.

On Sunday, they chatted with Lindberg about former team members, the field's new turf and the future of the team. Cathy flipped through a photo album to show him the Doubedays players they've welcomed.

Lindberg first met the couple in the summer 2018, when they threw the first pitch that year. Lindberg thought it was a unique way to celebrate an anniversary. It wasn't until later he discovered they were actually married there, with chairs lined up on the field for guests.

"They're amazing, between everything they that they do for being a host family, supporting the team. You can always hear them out in the ball park," he said.

After throwing their latest pitches, the couple sat in the home dugout where Bill waited on that day 17 years ago to be wed.

Syracuse Mets General Manager Jason Smorol was the Doubledays GM who arranged to have the Techmans married at Falcon Park. If Auburn's baseball team doesn't make a comeback in 2021, Bill and Cathy believe they'll be able to continue their tradition at the Syracuse field. But they're hoping it doesn't come to that.

HIT: To Auburn Doubledays General Manager David Lindberg, for working with a local couple to continue a special tradition.

Bill and Cathy Techman display memorabilia from their 2003 wedding at Falcon Park.

Bill and Cathy Techman on their wedding day at Falcon Park on July 5, 2003.