A Seneca County man who sued the Cayuga Nation Police Department's leader and a private security firm, alleging he was assaulted during a 2020 fight on nation property, is now facing criminal charges stemming from the same incident.

The Seneca Falls Police Department issued a criminal summons Tuesday to Charles R. Bowman, 47, of Fayette, charging him with third-degree assault and third-degree criminal trespass. He is to answer to the charges in Seneca Falls Town Court at a later date. Police said the charges resulted from a "signed prosecutor's information" filed by the Seneca County district attorney with the town court.

The violent clash between the nation's traditional members and Cayuga Nation police and security personnel took place Feb. 29, 2020 on nation property in Seneca Falls. Fighting broke out after a press conference held by the Cayuga Nation Chiefs of the Haudenosaunee Confederacy at a site the traditional faction had occupied for several years. The Cayuga Nation Police Department was formed by federal representative Clint Halftown, whose leadership the traditional Cayugas oppose.

A week prior to the clash, Halftown's forces raided the site and destroyed buildings, claiming the property was being occupied illegally. Citing the nation's sovereign status, local law enforcement did not intervene in that property dispute.

Seneca County authorities did launch an investigation into the Feb. 29, 2020, incident. Recently, the district attorney convened a grand jury to review the matter.

Bowman, who is not a Cayuga Nation citizen, had worked for the traditional faction at the property, which housed a convenience store. He claimed he was trying to assist a woman in the middle of the melee that day and was assaulted in the process. The nation, though, said Bowman attacked its officers.

"The Nation’s police officers were peacefully protecting Nation property without arms or force, and several of them were beaten, kicked and injured by Mr. Bowman and his mob," a Cayuga Nation statement issued Tuesday night said.

"The Nation commends the Seneca Falls Police Department, the Seneca County District Attorney and the grand jurors for their diligent and careful work. The Nation and its police department look forward to future cooperation on matters of shared importance."

Bowman, who was briefly hospitalized following the incident, filed a lawsuit in state Supreme Court in Seneca County in February against Mark Lincoln, the Cayuga Nation police superintendent, and Pathfinder Solutions LLC, an Indiana-based security firm that was hired to assist Cayuga Nation police during that time. An undetermined number of as-yet unidentified Pathfinder employees are also named as defendants.

In the lawsuit, Bowman said he was "mercilessly punched and kicked" and pepper-sprayed in the face "while he was captured and helpless." He said one of the unidentified defendants "grabbed and groped Charles' crotch and penis" twice, one during a physical search of his body and once after the search. The lawsuit said Bowman was taken by ambulance to Geneva General Hospital, where he was treated for nasal bone and nasal septal fractures and other injuries.

The Cayuga Nation itself, which is a sovereign entity immune to civil lawsuits, is not named as a defendant.

The attorney representing Bowman, John P. McNamara, of Ithaca, said he was disturbed to hear that his client is now charged criminally.

"I am shocked, with the video that is out there that clearly shows him being abused, that this is how a local system would be treating someone in his shoes," he said Wednesday morning, adding that the charges do not "change the trajectory" of the lawsuit.

On Wednesday afternoon, an attorney from the Syracuse law firm hired by Halftown to represent the Cayuga Nation, filed a notice of removal on Bowman's lawsuit that moves the case to federal court on behalf of Lincoln, Pathfinder and the other unnamed defendants.

The nation issued a press release on the removal action, explaining that a federal court is the proper venue for such a case.

"Although his allegations are false, Bowman’s claims raise issues of federal law governing Indian nation sovereignty and police authority that must be resolved in federal court," the release said.

The release included a statement from Halftown: “(The) Nation stands by Superintendent Lincoln and its police officers, who did nothing wrong when they were set upon and attacked by Bowman and others. The Nation will fight back against all illegitimate attacks on its tribal sovereignty.”

Charles Bowman shared this photo of himself in a hospital bed after he was injured Feb. 29, 2020, in fighting that broke out on Cayuga Nation … 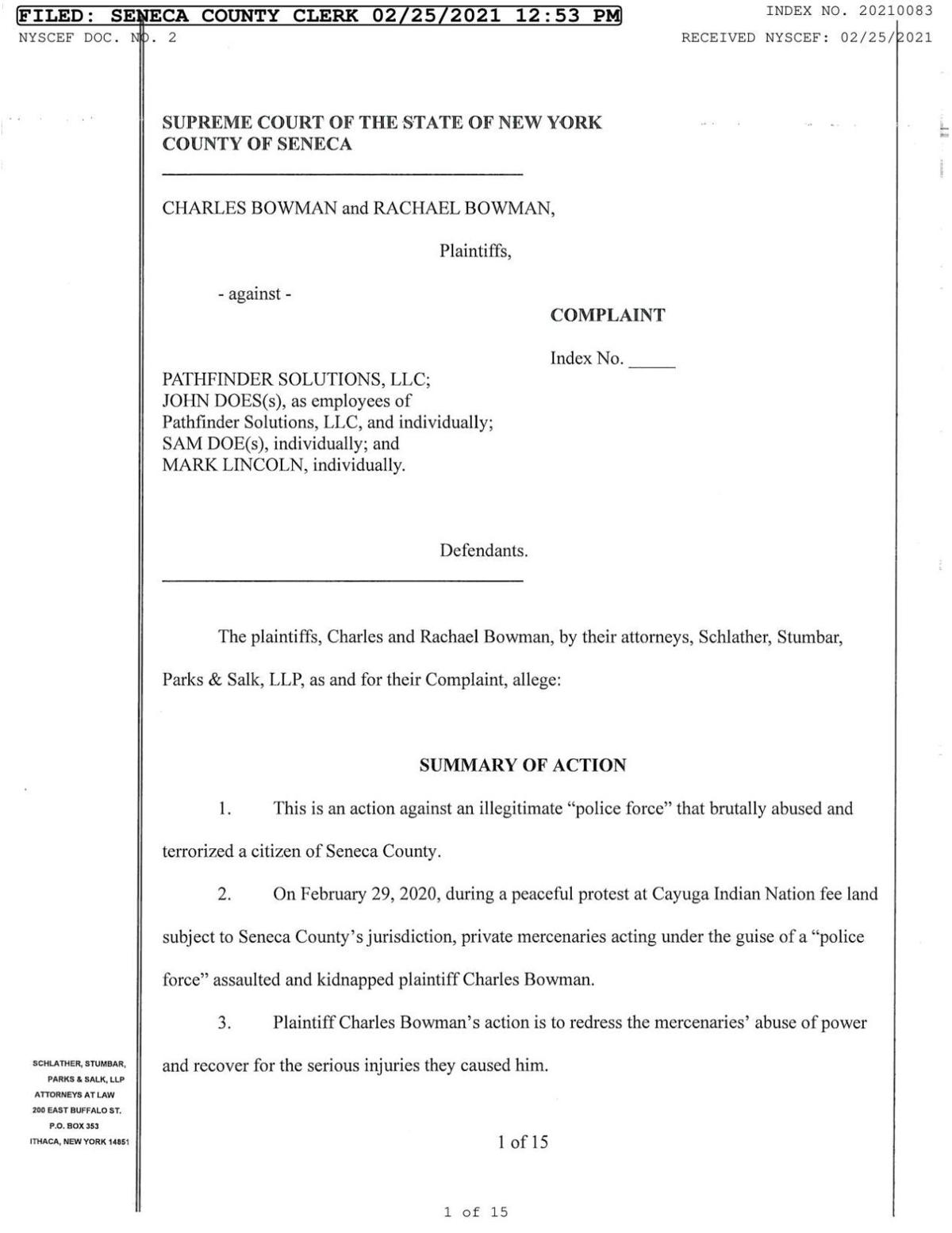 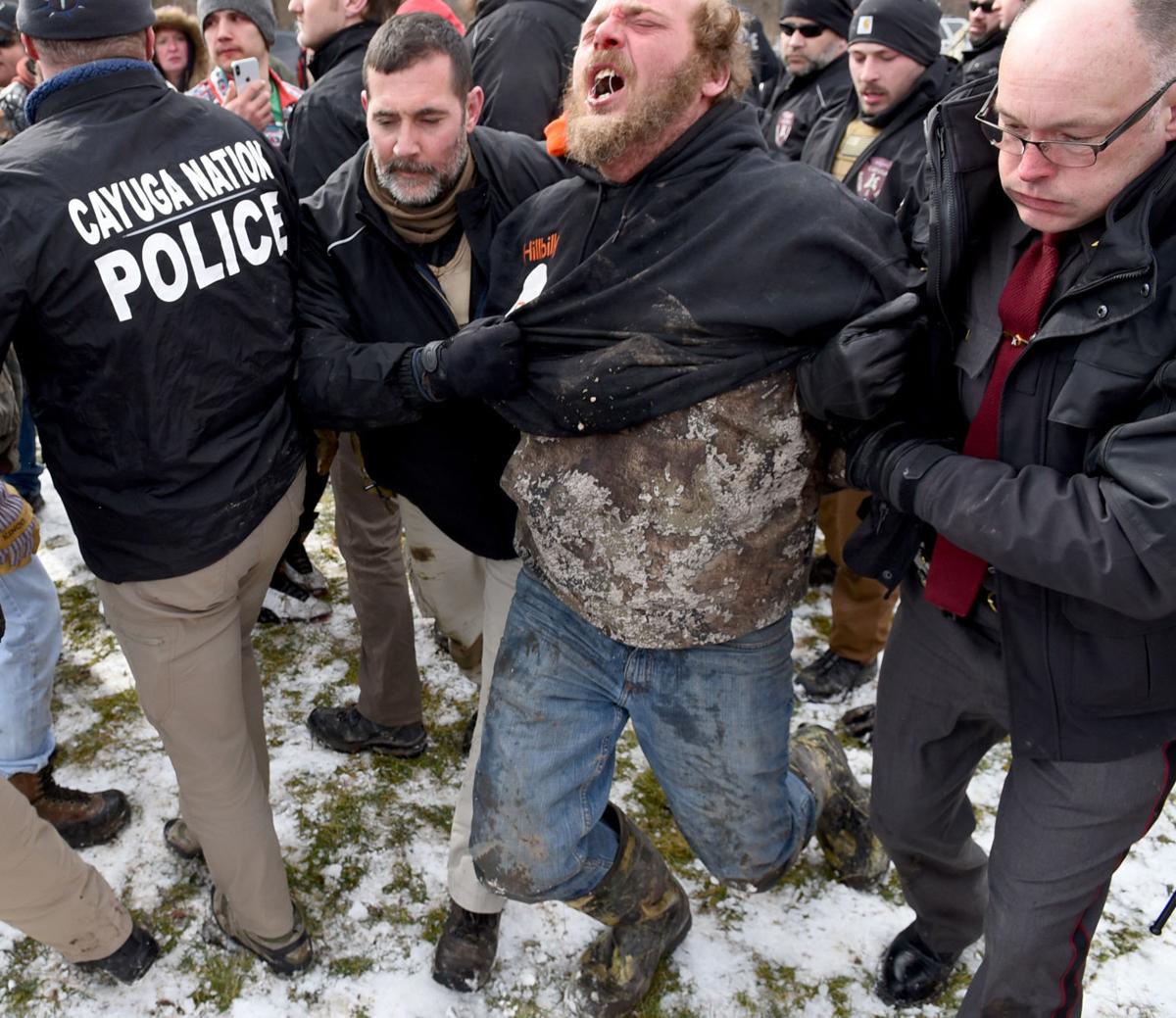 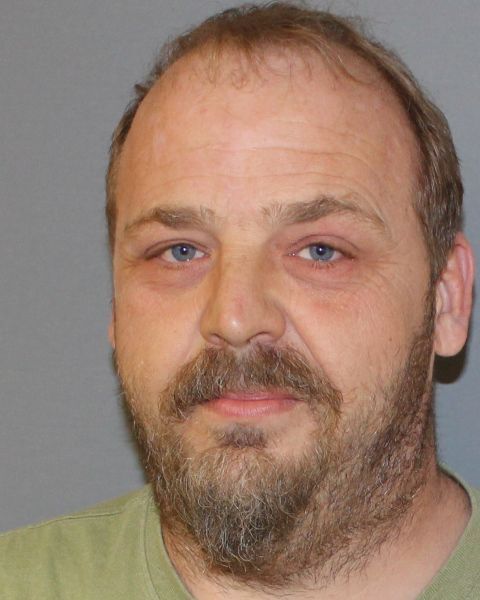 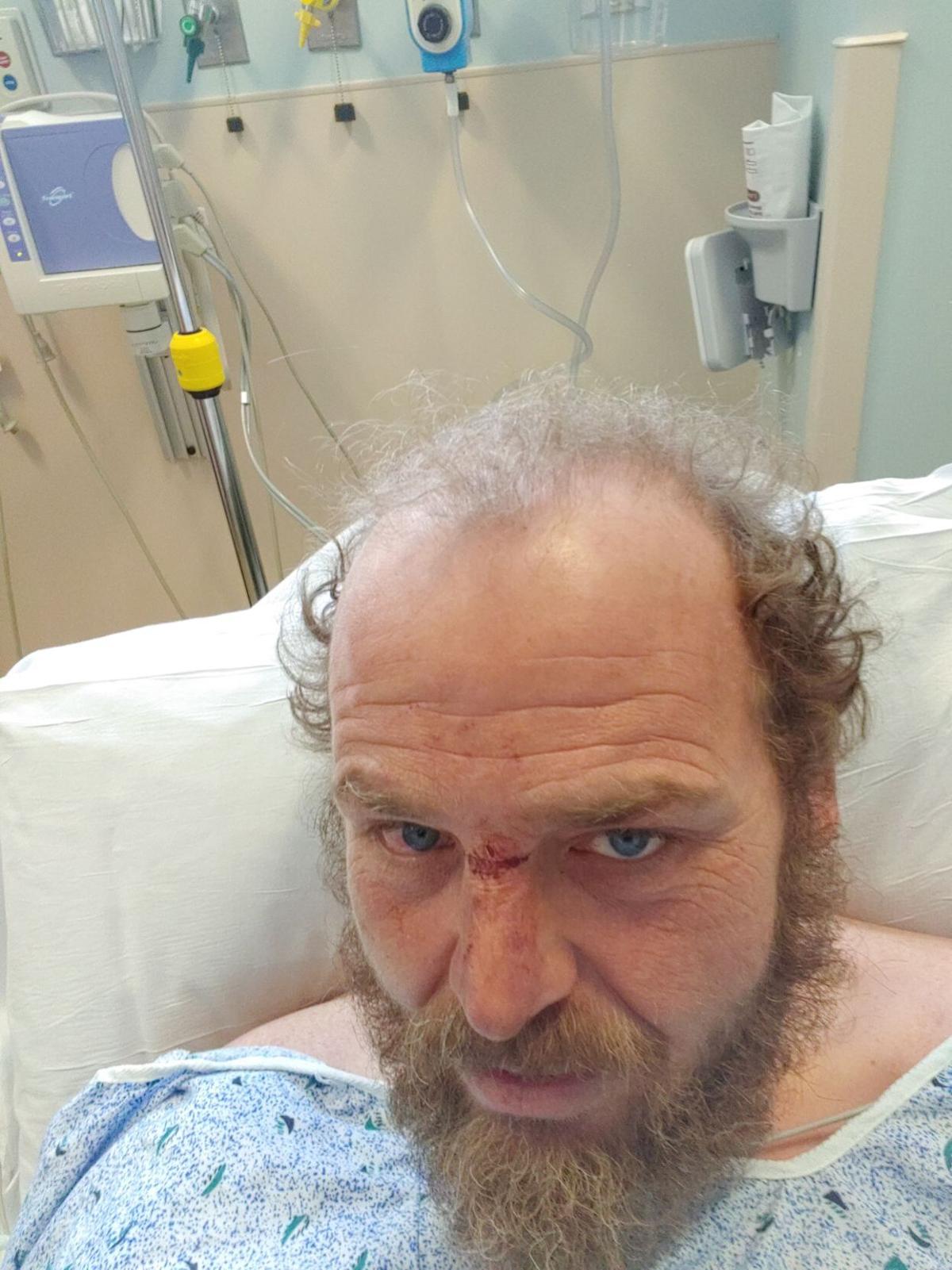 Charles Bowman shared this photo of himself in a hospital bed after he was injured Feb. 29, 2020, in fighting that broke out on Cayuga Nation property.