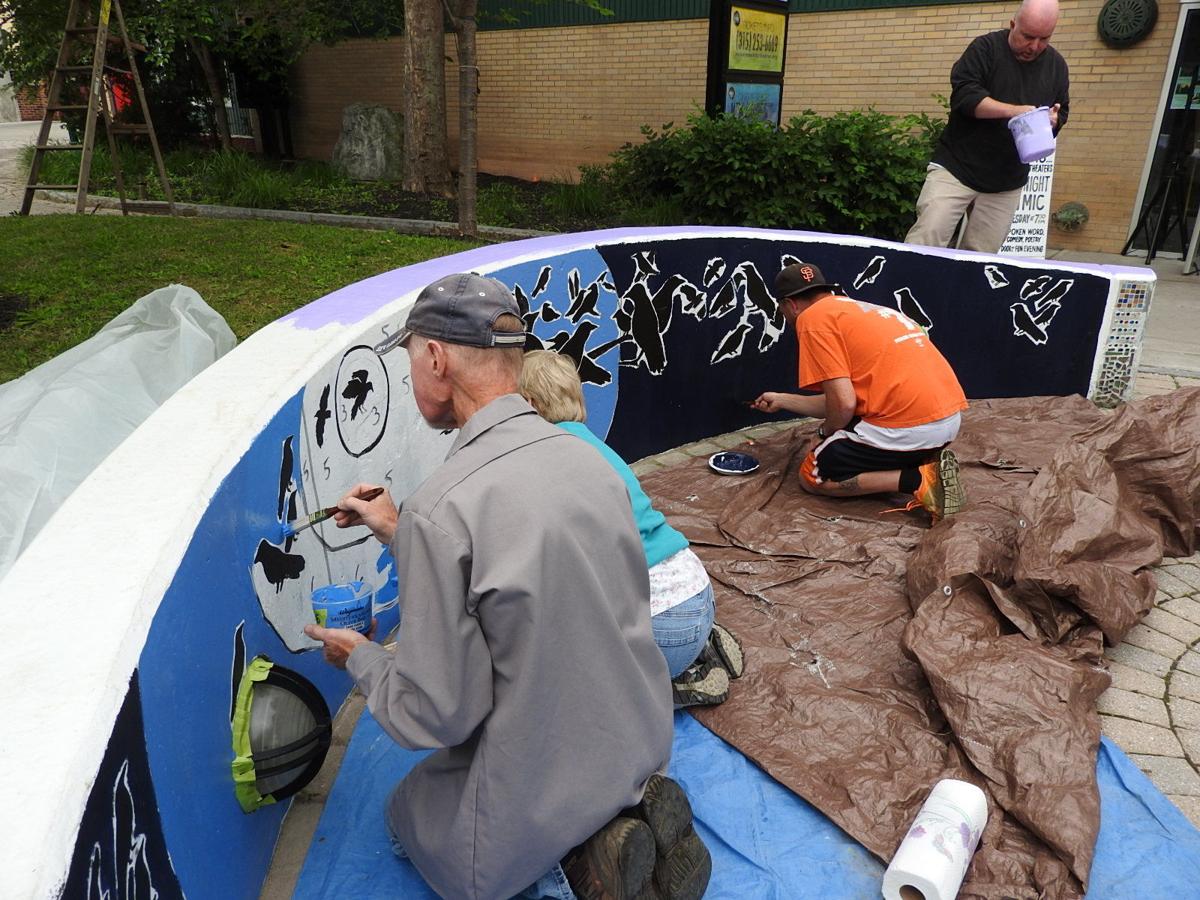 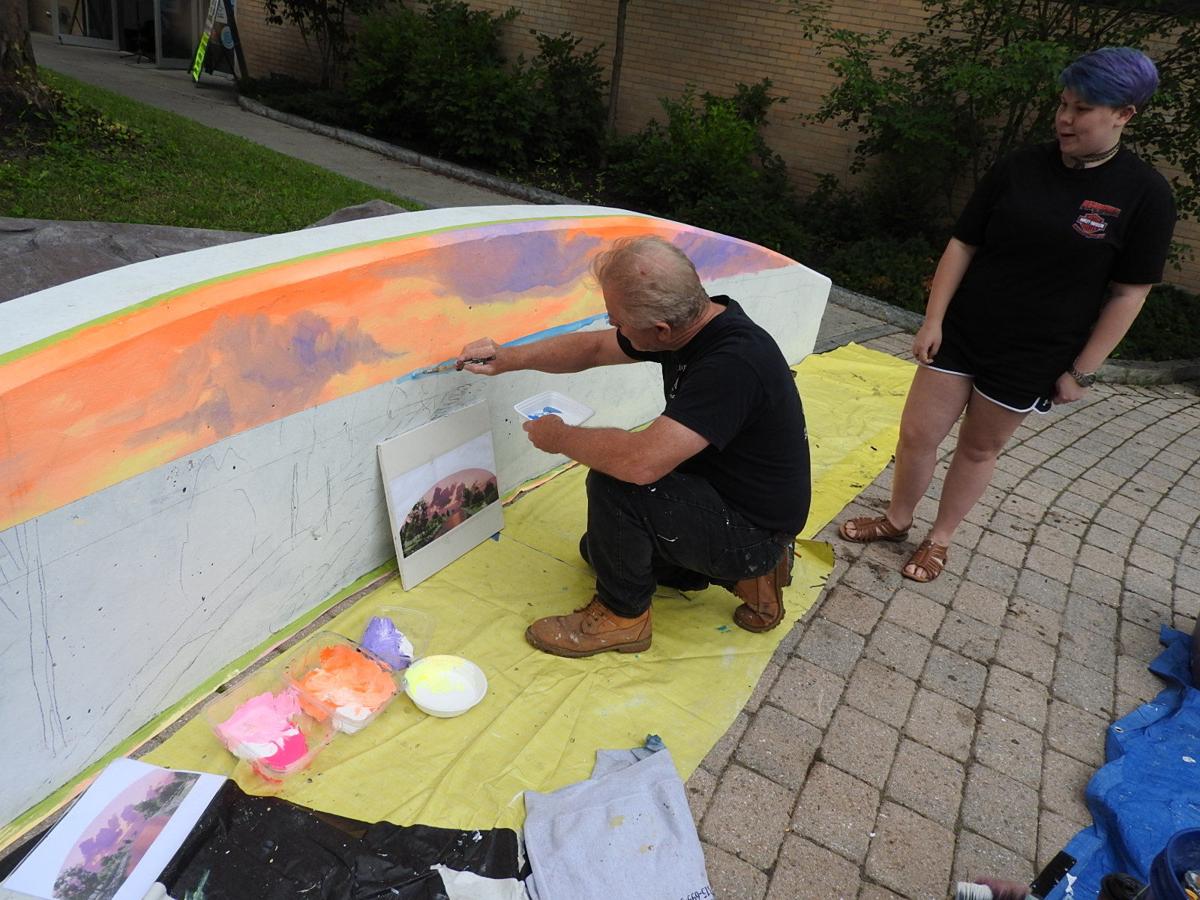 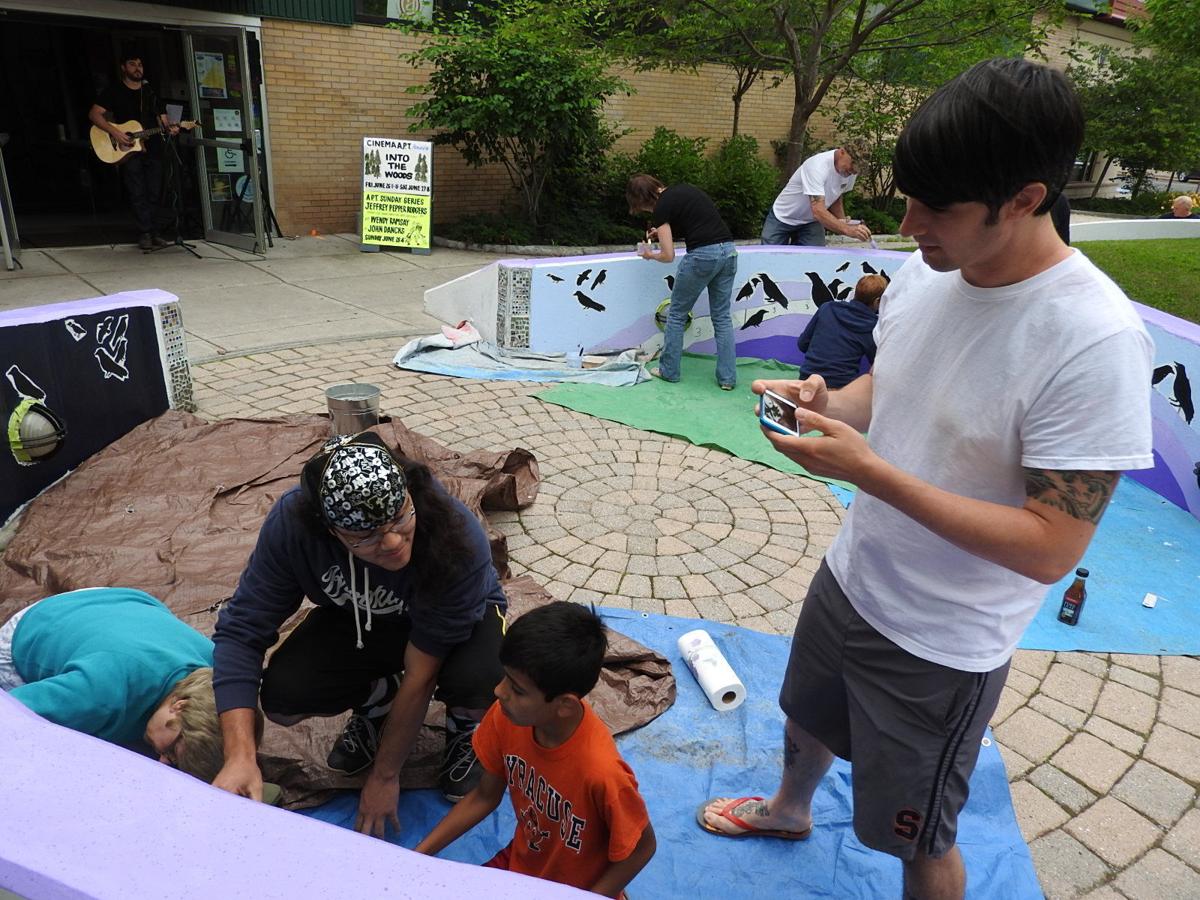 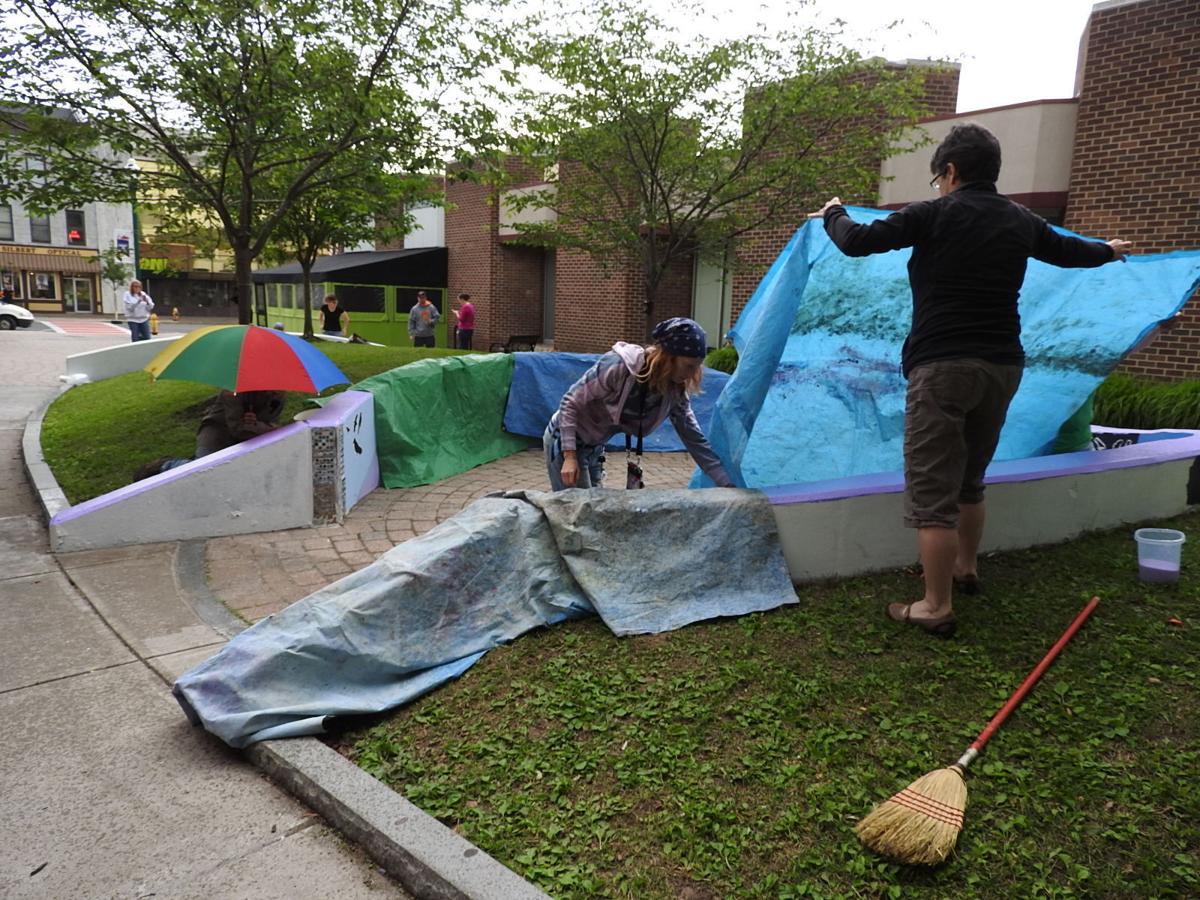 Art for Auburn’s Jesse Kline, left, works quickly with volunteers to cover up freshly painted murals on Exchange Street as the rain set in Saturday morning.

Ellen Leahy | Special to the Citizen

AUBURN | The rainy weekends are starting to add up. Art for Auburn crew and volunteers, under the direction of Jesse Kline, hit Exchange Street bright and early Saturday morning for a painting party. Tension was in the air as they worked to beat the rain predicted to arrive around noon. Unfortunately, the 10 a.m. sprinkles turned into a deluge before 11 a.m.

But all was not lost.

Muralist Anthony Clubine said the paint was water-based so they were prepared with tarps to preserve their brush work. He was working with his daughter Kaylie Clubine, 15, on an Owasco Canal landscape. It can be seen from Genesee Street as one looks south down Exchange Street. Anthony has several murals in Auburn, including pictures at Meyer’s Bookbinding Co., the Liberty Store, Colonial Laundromat, Eliminator Automotive & Cycle and Dance Hall Antique.

City Clerk Chuck Mason, who lives downtown, said he was glad to work on the project as he walks by the park daily.

Exchange Street is a closed off street that is now a park. The murals are covering areas that were previously mosaicked walls. Auburn Public Theater’s front doors were open and Dan Vitale was entertaining on his guitar. Molto Bene! and Have You Heard? were slated to play starting at 11 a.m. before the rain halted the public art installation event.

Kline was impressed with the amount of work volunteers produced in the short time they had available Saturday and was confident they would get the project finished a little here and there without any trouble.

Carol Pennell, retired from St. Joseph’s Hospital, joined her husband, Bob, who has worked on five previous projects with Art for Auburn.

“I finally have the chance to do things I’ve been wanting to do,” she said.

Fine artist Jessie Reich and technical artist Dave Tobin were directing the work on a crow mural just south of the Clubine’s landscape. Reich said the original work was conceived by Auburn artist Blake Chamberlain, who now resides in Seattle.

Kline said volunteers are always welcome. For more information, contact her at jessekline31@msn.com or find "Art for Auburn" on Facebook.

An Owasco woman was seriously injured when a truck ran into the back of her car Thursday in Sennett.

One person was reportedly seriously injured in an accident Thursday in Sennett.

AUBURN — Citing the potential for more violence in prisons, the union representing New York correctional officers is suing to stop the impleme…

A fatal accident on the state Thruway Thursday afternoon caused traffic to be diverted onto Route 34 in Weedsport.

The Weedsport man arrested for publicly firing a gun in the Washington area days before the Jan. 6 Capitol attack was sentenced April 28 in Ar…

With children ages 12-15 now eligible for the Pfizer COVID-19 vaccine, the Cayuga County Health Department is working to secure doses for clin…

Art for Auburn’s Jesse Kline, left, works quickly with volunteers to cover up freshly painted murals on Exchange Street as the rain set in Saturday morning.