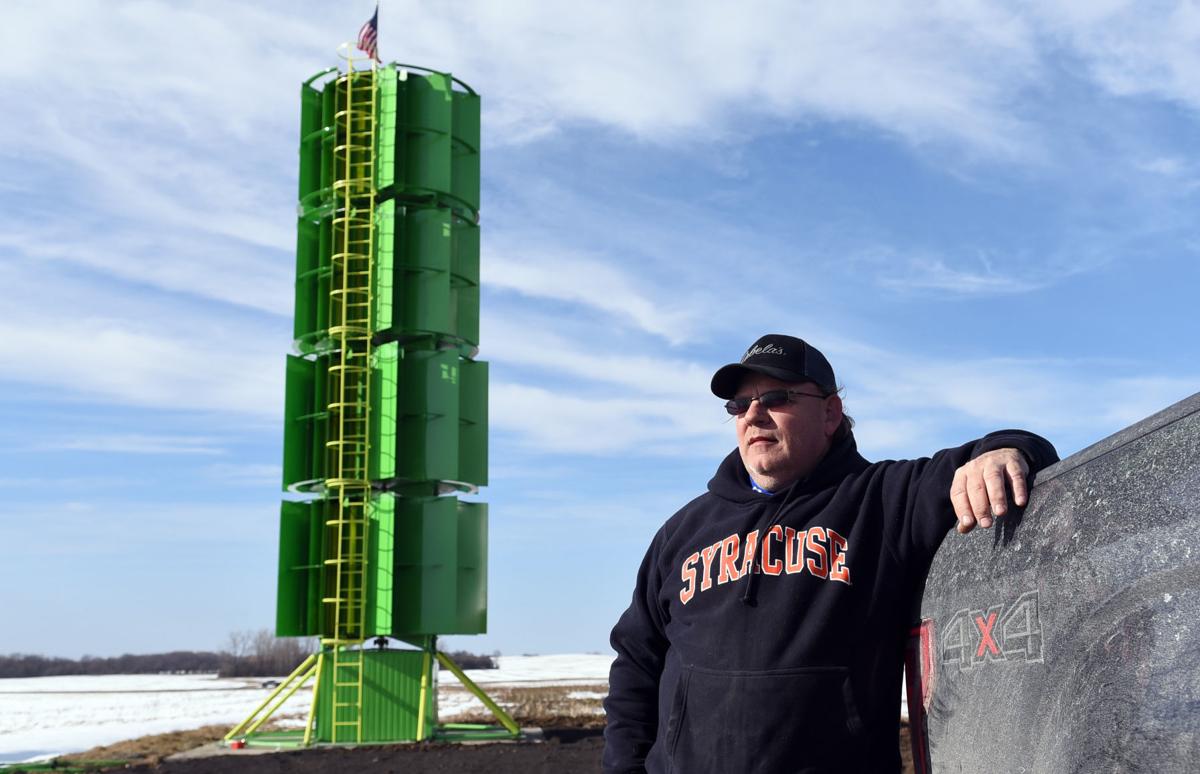 Douglas Hirsh, of Prosto Wind Power, stands near a wind turbine installed by his company on DuMond Farms in Union Springs. 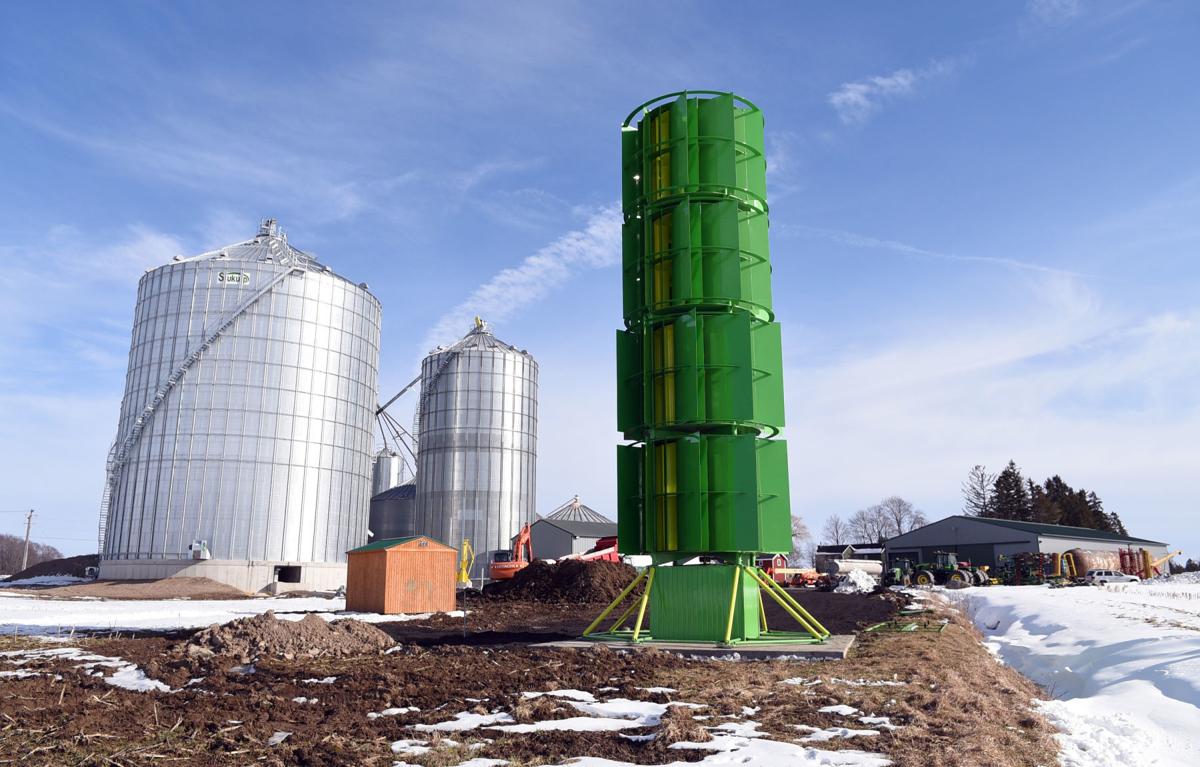 A vertical wind turbine has been installed at DuMond Farms in Union Springs.

A Union Springs farm will soon be harvesting more than just crops.

DuMond Farms is the site of a new vertical wind turbine installed this week, which will harness energy from the slightest breeze to powerful hurricane-force gales, converting it into electricity. More typical turbines look like windmills, but this one has panels that harness the energy and spin like a top, said Doug Hirsh, president of Prosto Wind Power.

Hirsh, of Skaneateles, brought the technology over from Poland, and he said this turbine is the first of its kind in the United States. He described the structure like piecing together Legos. Each stack is about 10 kilowatts of power, and DuMond Farms is starting with four stacks.

Crystina Brooks, solution manager at the farm, said the turbine will hook up to their green facility and Intertek, a company out of Cortland, will be monitoring its productivity. Hirsh said a six-month test run is part of getting the technology certified by the American Wind Energy Association. Ultimately he'd like to start manufacturing the turbines in Cayuga County to sell worldwide.

"We're a progressive farm that's trying to bring innovation and efficiencies to farming to better not only DuMond agriculture, but also to help the farming community as a whole," Brooks said.

Maureen Riester, business development specialist at the Cayuga Economic Development Agency, brought Hirsh and DuMond Farms together. After the state recently awarded the farm $879,000 to construct a soybean processing plant, and after working with Hirsh on his green energy technology, she thought the two businesses could help each other out.

"It kind of came full circle to have this value-added processing facility, and with this expansion, I knew they needed more power," she said. "It just makes a lot of sense."

Besides the clean energy benefits, Hirsh said the way his model works is safer for wildlife and the environment. The windmill design has been known to kill birds and bats, but Hirsh said his vertical panels appear like a flat wall.

"You do not get too many birds flying into walls," he said, laughing. "They'll tend to avoid that."

While the farm's turbine will be hooked up directly to provide power on site, Hirsh said it has the potential to be hooked up to a microgrid or any utility company's grid. It does not need the traditional 25 to 45 mph winds, either, to keep the turbine going. He said similar to an automatic transmission in a car, his turbine can adjust and keep the energy flowing at low, 5 mph winds up to 135 mph.

They're also built to last, Hirsh said, at about 60 years. He's excited to see how this experiment turns out, as are Brooks and Riester.

"The future is bright, let's say that," Hirsh said.

On Texas visit, Biden warns Iran 'to be careful'

Wegmans has been fined $1,000 by the Cayuga County Board of Health for its second violation of New York's mask mandate during the COVID-19 pandemic.

'Bear witness': What one NY lawmaker saw when she visited Auburn prison

Elevator-sized cells. "Pens" for incarcerated individuals placed in solitary confinement to spend an hour each day outdoors. How COVID-19 affe…

An Auburn man who previously admitted raping a girl younger than 15 was sentenced to six months in Cayuga County Jail.

After 23 years on the run from a felony weapons sentencing, a former Mentz town supervisor will finally begin serving time in a state prison.

A juvenile offender is facing multiple felony charges for stealing cars and other items, the Auburn Police Department said.

U.S. Rep. John Katko was one of three Republicans who joined with House Democrats on Thursday to pass a bill that would prohibit discriminatio…

More than a month after U.S. Rep. John Katko was one of 10 House Republicans who voted to impeach President Donald Trump, an attempt to censur…

Douglas Hirsh, of Prosto Wind Power, stands near a wind turbine installed by his company on DuMond Farms in Union Springs.

A vertical wind turbine has been installed at DuMond Farms in Union Springs.

The new turbine on DuMond Farms in Union Springs.