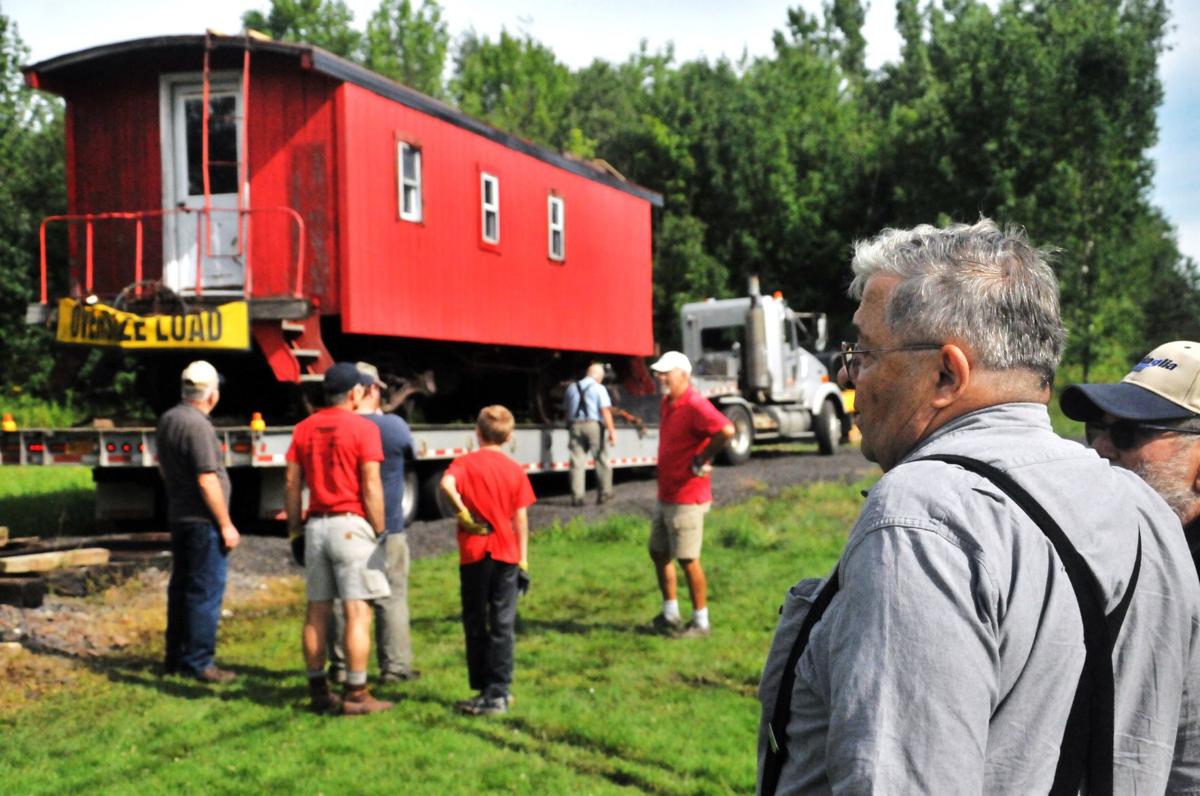 Joseph Ukleya watches as a 1917 caboose is removed from his front lawn in Hannibal Friday. 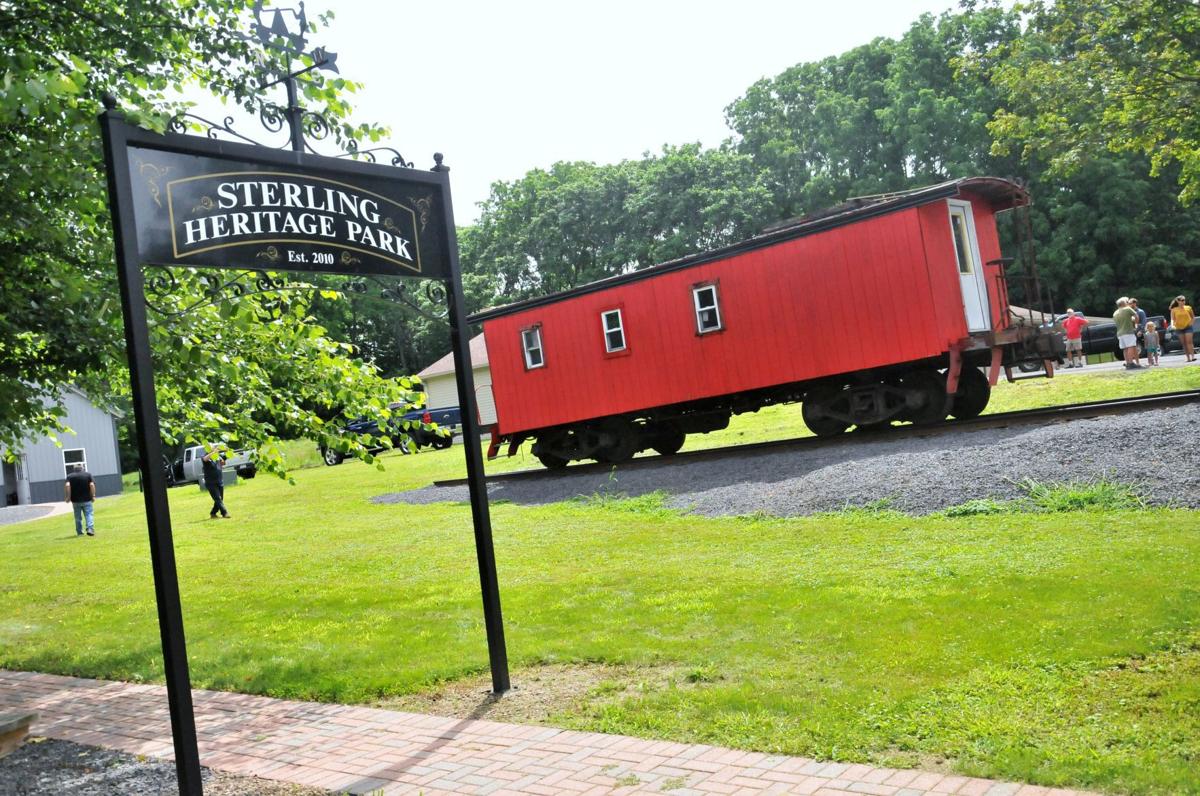 A 1917 caboose is the latest addition to Sterling Heritage Park. 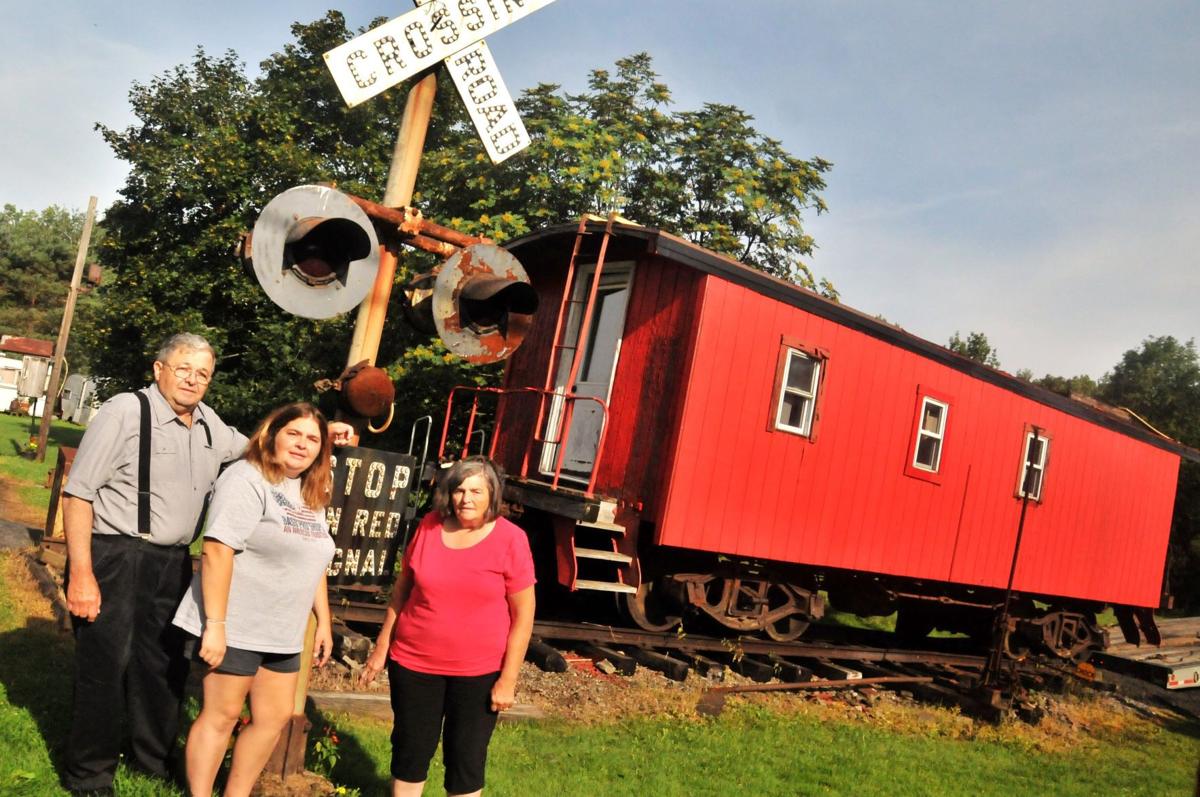 Joseph and Loretta Ukleya stand with their daughter, Amy Pepper, center, with the family's 1917 New York Central caboose at their home in Hannibal. 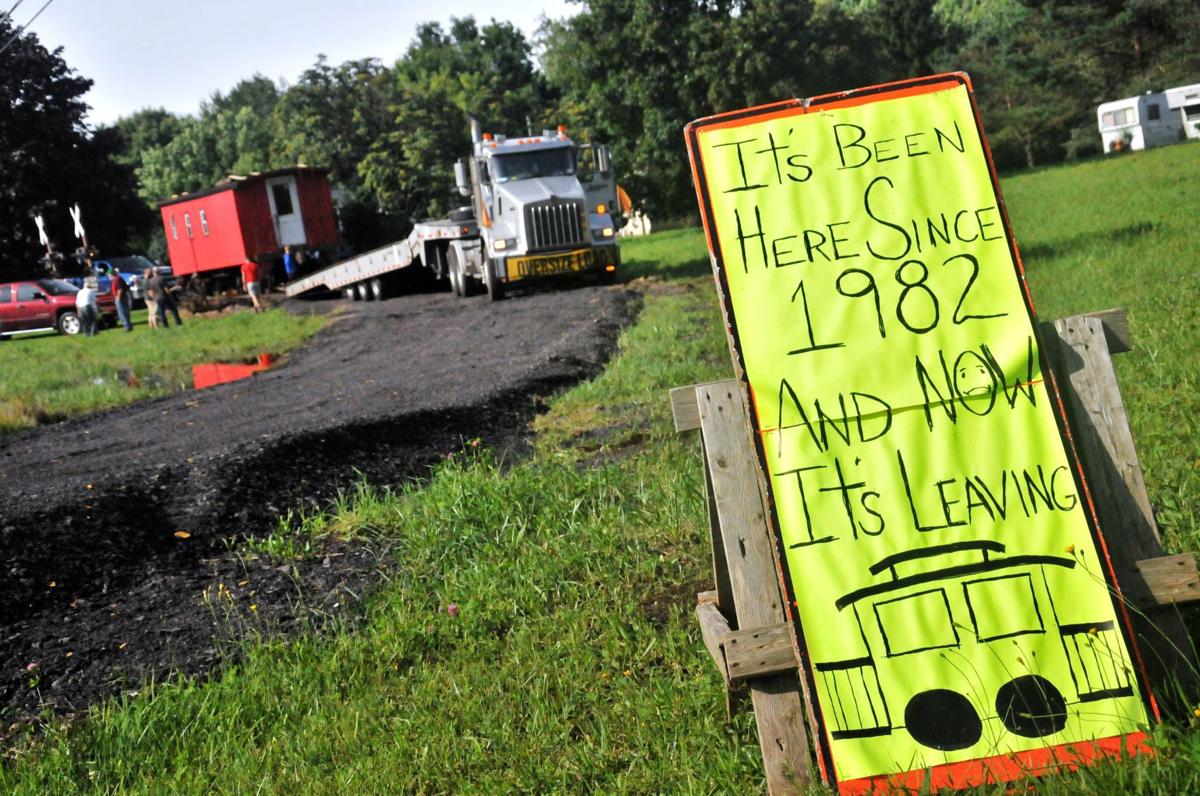 The Ukleya family displays this sign on their front lawn in Hannibal, where a century-old caboose has been since 1982.

STERLING — For the past 35 years, the Ukleya family's home has been hard to miss.

Nestled along Route 34 in the town of Hannibal, Joseph and Loretta Ukleya raised their three children — Marcia, Amy and Tom — in a humble one-story house. But it's what was beside the house that made drivers stop and stare: a big red caboose.

Since 1982, the 20-ton New York Central caboose has rested on a set of railroad tracks in the family's front lawn, drawing dozens of drivers to park for a picture or two. However, on Friday morning, people pulled over for the last time, as the Ukleyas' railroad car took one last trip — to Sterling.

Joseph Ukleya said he and his wife Loretta decided to donate the caboose to the Sterling Historical Society late last year, as the car's upkeep simply became too much.

"I'm getting older and it needs work," Joseph said, laughing. "I couldn't just let it rot, and I knew (the historical society) would take good care of it."

Built in 1917, the caboose used to operate on the Hojack line between Rochester and Oswego. As such, it likely ran on an off line through Sterling.

After purchasing a pair of red railroad flashers and white crossing signs in 1980, Joseph said he came across the caboose at a restaurant in Webster. At the time, the car had been mostly destroyed in a fire and the owner was looking to sell it for scraps.

But Joseph had something else in mind as he bought the burnt caboose, and together, he and his family rebuilt the railroad car by hand.

"We tore it apart, jacked it up in the air and brought it in," he said. "It's been here ever since."

His daughter, Amy Pepper, was 2 years old when the Ukleyas parked the caboose in the front yard on Route 34. Now 36 years old, Pepper wept as she watched the family heirloom be towed to town.

"It's bittersweet to see it go," she said. "We grew up with that caboose."

Rather than sell their prized possession, Joseph and Loretta decided to donate the caboose to the society in memory of their daughter, Marcia Ukleya. Marcia passed away in 2014 after a long battle with rheumatoid arthritis.

"Knowing it is going to the society, knowing they're going to refinish it and knowing it will be in memory of our daughter — that's special," Loretta said. "This is what she would want."

At around 9:30 a.m. Friday, after lifting the caboose off the Ukleyas' track and onto a special track bed, the Ukleyas followed the railroad car on a six-mile journey to Sterling. Roughly three hours later, the caboose came to rest at its new home at Sterling Heritage Park on Route 104A.

"You can't even imagine what this means to us," said Pat Shortslef, President of the Sterling Historical Society.

"It's going to be a great attraction," Treasurer Jim Chaffee added. "It will be a highlight of what we have (at the park)."

According to Chaffee, the historical society has applied for grants to completely restore the caboose to its original finish.

"It's a great addition to the railroad theme at Heritage Park, which already has an original railroad tower from Sterling Station and a hand car that pumps along 88 feet of track," he said. "It's going to mean a lot of work for us, but it's another attraction for us."

When asked how the caboose looked at the park, Joseph Ukleya smiled through tears.

Gallery: New use for old caboose

Joseph Ukleya watches as a 1917 caboose is removed from his front lawn in Hannibal Friday.

A 1917 caboose is the latest addition to Sterling Heritage Park.

Joseph and Loretta Ukleya stand with their daughter, Amy Pepper, center, with the family's 1917 New York Central caboose at their home in Hannibal.

The Ukleya family displays this sign on their front lawn in Hannibal, where a century-old caboose has been since 1982.