Fifteen years after the Cayuga Indian Nation of New York applied to have properties put into federal trust — a move that followed guidance from a 2005 Supreme Court decision — the federal government has made its decision.

In a letter to the Cayuga Nation dated July 31 that it received this week, Tara Sweeney, assistant secretary for Indian affairs with the U.S. Department of the Interior, said the agency determined that protective land trust status for 114 acres of Cayuga Nation-owned property in Cayuga County would further aggravate unrest between local governments and the nation.

Protective trust status for nation-owned lands would exempt the nation from local and state taxes and land use laws. A 2005 U.S. Supreme Court decision said such exemptions are not automatically applied to properties that Native American nations purchase on the open market; a land-into-trust application must be filed and approved by the federal government.

The nation's trust application, originally filed in 2005, and refiled in 2012 after it has been returned as incomplete, has been opposed by numerous local governments, including the village of Union Springs, town of Springport, Union Springs Central School District and Cayuga County.

A key factor in Sweeney's decision was violence that occurred last winter on nation-owned land in Seneca Falls. A Cayuga Nation police department formed by federal representative Clint Halftown in February raised and demolished properties that had been under control of an opposing faction with the nation that doesn't recognize Halftown as their leader. A violent clash broke out at the site a week later when Halftown opponents came onto the property after holding a press conference and were met by the Cayuga Nation police force.

"The destruction of property — including a daycare and schoolhouse — and significant acts of public violence are serious matters, and they weaken the trust that the Nation's government can operate at this time in a harmonious manner with other governments and law enforcement officers that share the same geography as the Nation's reservation," Sweeney wrote.

"Taking the property into trust at this time could heighten the current tension between the Nation and its neighbors, further complicating and exacerbating an already inflammatory situation."

Because of that issue, Sweeney wrote, the federal government's Bureau of Indian Affairs is reluctant to take on the additional regulatory and jurisdictional burdens specific to the Cayuga Nation properties.

The Cayuga Nation issued a statement Friday afternoon blasting the ruling, calling it "an act representing the worst kind of government arbitrariness and ineptitude."

“This line of reasoning, that the BIA cannot be bothered to do its job, should be a grave concern to all Indian nations across the country, who are well advised never to trust the federal government to do the right thing. If the federal government does not want to or cannot do its job, it should give back the Nation’s entire historic reservation of 64,015 acres,” Halftown said.

The nation's statement also said the federal government's decision was caving to local political pressure, "much of it racially motivated." The nation's vows to fight the decision, although it did not state how it would do this.

The Interior Department ruling comes less than two months after the Cayuga Nation filed a lawsuit against the agency, saying it was being harmed because the federal government had not yet made a decision on the trust application.

The Department of Interior's Bureau of Indian Affairs rejected the original application in a decision made in 2011. At the time, BIA said the application was incomplete and could be resubmitted in the future.

Over the next several years, there was little public information disclosed about the application. But in 2018, local government officials in Cayuga and Seneca counties received notification from the BIA the application review was moving forward and the local governments were initially given 30 days to submit a comment.

Cayuga County is urging the U.S. Department of the Interior's Bureau of Indian Affairs to re…

After receiving an extension of another 30 days, local governments formally stated their opposition to the application.

Complicating the issue is the long-running internal dispute over who is the nation's leadership council under the Cayuga law. The interior department in recent years has sided with Halftown after his council conducted a statement of support campaign. 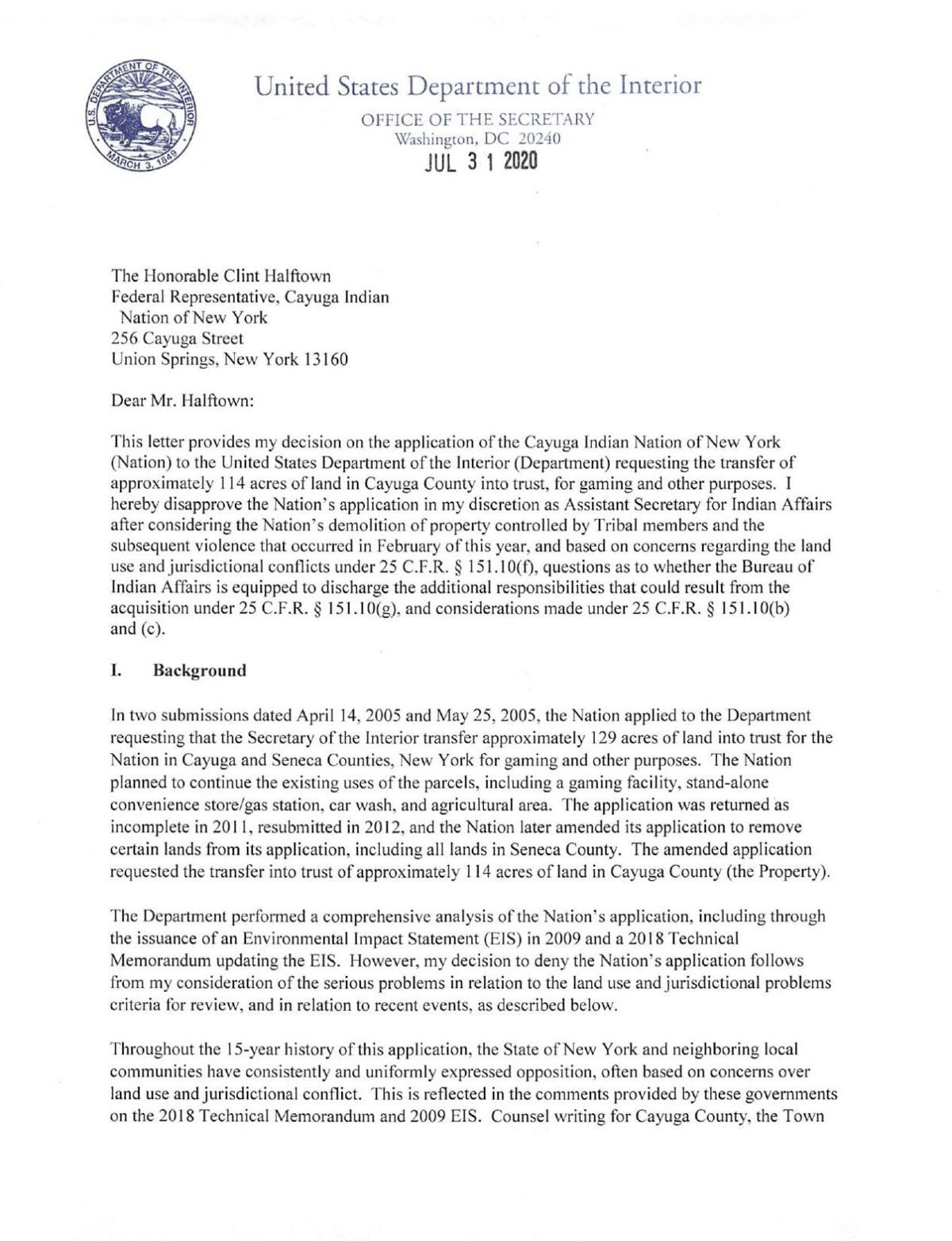 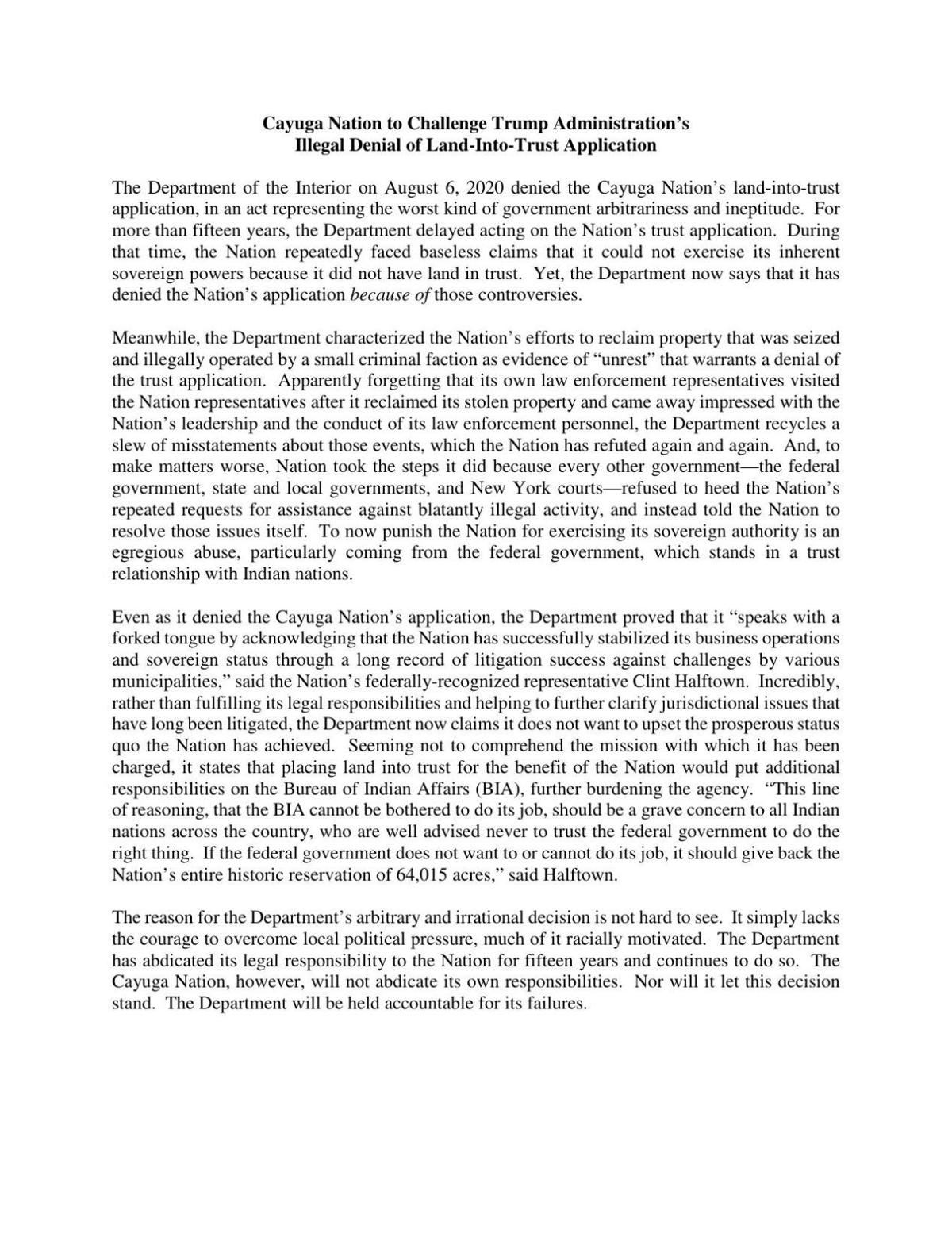 Our view: Cayuga Nation needs to get its house in order

Seneca County has lost another legal battle in its decade-long effort to foreclose on Cayuga Indian Nation of New York property for unpaid taxes.