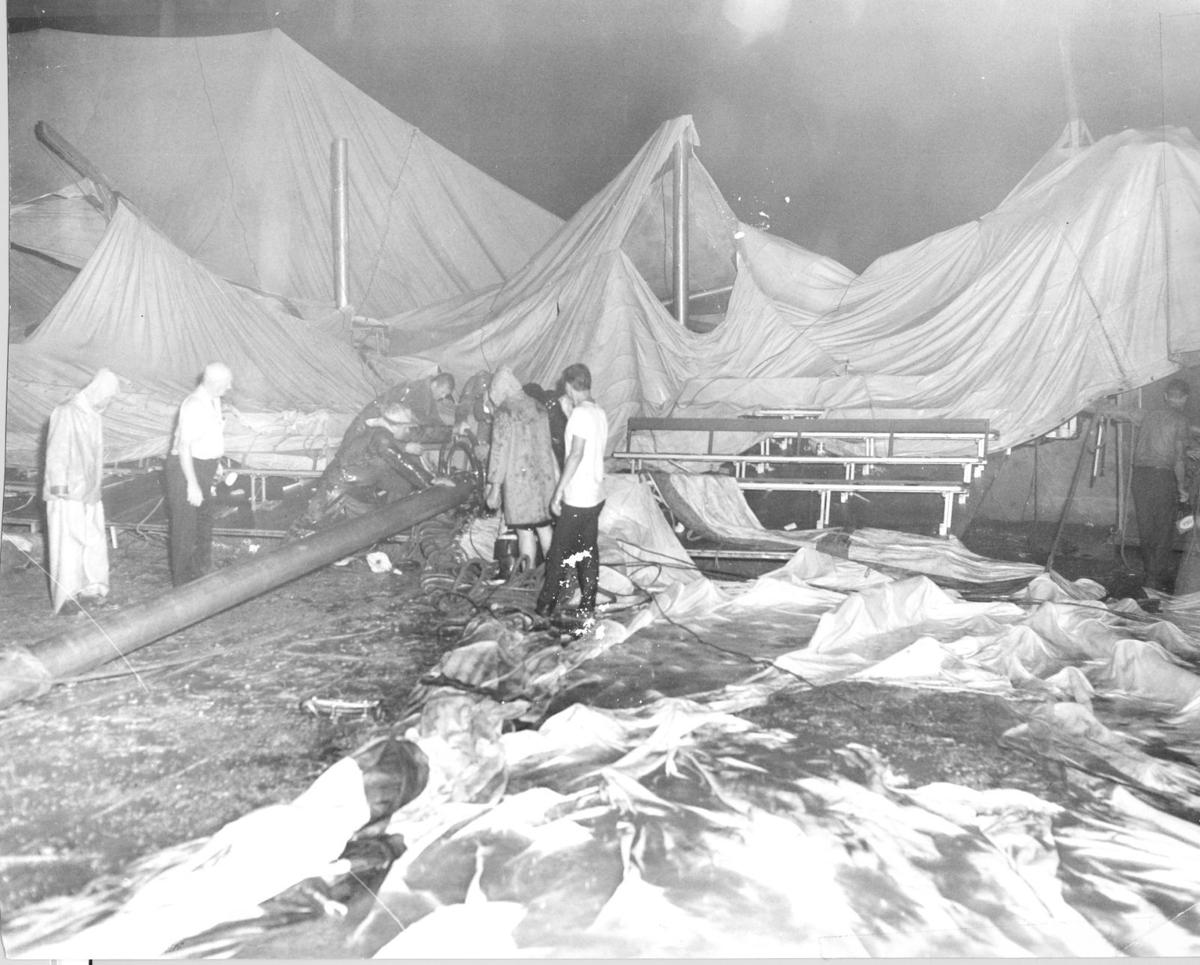 In this scan of an original photograph, emergency crews work to clear the collapsed tent from the Clyde Beatty-Cole Brothers Circus that trapped hundreds of spectators when rainstorm winds knocked it down on July 9, 1968. 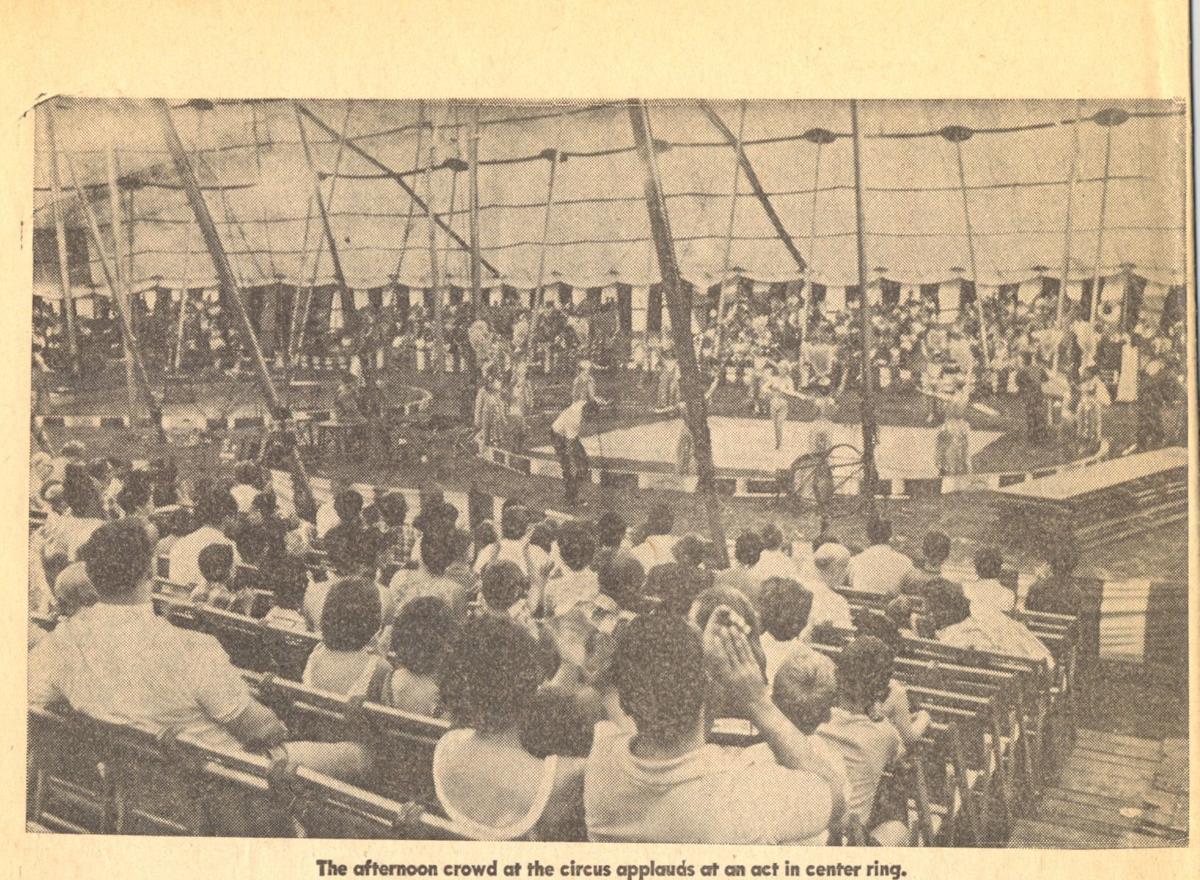 In this scan from The Citizen-Advertiser, spectators clap for the circus before the tent collapsed.

Monday marks the 50th anniversary of an infamous circus tent collapse in Cayuga County that left more than 100 injured but miraculously killed no one.

On July 9, 1968, the Clyde Beatty-Cole Brothers Circus was finishing its second performance of the day as a rainstorm raged outside the canvas tent set up at Emerson Park. As workers prepared for the trapeze act, gusts of wind lifted the quarter poles that hold the tent up into the air, and the tent came crashing down.

The collapse made national news, as newspapers at least as far away as Indiana ran stories on the event with headlines like “Show ends in finale of horror.”

Numerous witnesses at the time told The Citizen-Advertiser, as The Citizen was then known, that the tent billowed and crashed to the ground almost instantaneously, too quick even for the 2,000 spectators to panic.

“I was just wiping my brow after setting up the net for the trapeze act when I saw a quarter pole lift away from the ground,” one circus worker said. “I walked toward it nice and slow so nobody'd panic. Then I saw it lift almost three feet and start to swing out toward the crowd. I started to run, grabbed it, but it was too late.”

The poles swung through the air, striking spectators as they flew. One woman saw a pole slam her husband's head and knock him sprawling to the ground before a circus worker carried him, unconscious, out of the tent.

Mildred Fromel, who now lives in Nevada, was 42 at the time and had taken her children to the show. She remembered it as a “muggy, muggy day, like when you know it's going to rain.”

As the rainstorm worsened, some people were leaving early, but many, including Fromel, stayed.

“Little by little people were leaving, but we thought 'Oh we can't go. It'll pass over,” she said in a phone interview Thursday.

Then, the wind picked up the tent, she said, and for a brief moment one side was wide open for spectators to escape out of.

“We were petrified. We all ran. Even the elephants ran with us,” Fromel said.

Although some managed to escape, hundreds more were caught beneath the tent as it collapsed. Some were able to crawl their way to safety through the mud and canvas, others had to wait for emergency crews to cut a way out of the tent for them.

In a first-hand account written for the July 11 paper, James Pugh described how he had to use his body to protect a young girl he was seated near as the poles swung wildly. After the tent collapsed, the two were stuck under the tent, completely disoriented.

“The child I had cried only once and asked for her sister. I didn't known (sic) where any of the rest of our party were and I prayed they hadn't been hit by one of the polls (sic),” Pugh's account read.

Escaping from underneath the tent was not the end of the trouble for spectators, however. Many had been separated from their families, especially children, while others lost their belongings.

One insurance agent who handled the case and was at the scene of the collapse said, despite working as a “catastrophe man” for 20 years in insurance, he'd never seen people help each other so readily as that night., especially with people willing to help children while their own were still lost.

“It just seemed that they took an attitude that, 'Well, someone will take care of my kids, so I'll take care of someone else's,' such a humanitarian thing in a time of disaster,” Donald Richer said.

Many of those who made their way out of the tent found themselves at the nearby Green Shutters restaurant, which became a sort of impromptu headquarters for anyone trying to reunite with their friends and family.

Richer, the insurance agent, credited the plan as part of the reason there were no fatalities.

Many of those injured were treated in the field for minor injuries, but 110 were officially treated at Auburn Memorial and Mercy hospitals.

In all the chaos, someone stole $600 in cash and $2,800 in checks from a hospital safe, according to police. Meanwhile, an elephant had gotten loose and made its way to the backyard of a Mrs. Joseph Portello.

“In fact, she walked through my mother's garden but didn't hurt one plant,” she said of the elephant, which may have come from the circus or the nearby 4-H building which housed several.

In the aftermath, state inspectors from the Bureau of Factories and Mercantile Establishments found there to be no violations of code by the circus. Frank Tish, another insurance agent, estimated there to be approximately $55,000 worth of damages.

The cleanup effort took significant manpower, and more. Because the canvas tent was damaged the machine normally used to roll it up wouldn't work. Instead, the circus's elephants, which there were 11 of, including “Big Sid,” had to help roll it up with their trunks and feet.

The circus would return to the area plenty of times throughout the decades without incident. But in July 1992 it was forced to close due to a thunderstorm, and in the same day a worker was thrown off a 10-foot-high trailer when he was shocked by electricity while rewiring lights.

In this scan of an original photograph, emergency crews work to clear the collapsed tent from the Clyde Beatty-Cole Brothers Circus that trapped hundreds of spectators when rainstorm winds knocked it down on July 9, 1968.

In this scan from The Citizen-Advertiser, spectators clap for the circus before the tent collapsed.