Is it the Merry-Go-Round Playhouse? Or the Finger Lakes Musical Theatre Festival?

As of about 7:30 tonight, the answer is neither. At his traditional curtain speech at opening night of "Working: A Musical," Producing Artistic Director Brett Smock announced that the professional theater organization headquartered in Auburn has changed its name to The Rev Theatre Co.

Speaking to The Citizen Tuesday, Smock said the change was a long time coming.

What began as the Auburn Children's Theatre in 1958 and became the Merry-Go-Round Playhouse in the 1970s rebranded as the Finger Lakes Musical Theatre Festival in 2011. But while that most recent name reflected the organization's expansion to additional venues in Auburn, Smock said, it didn't reflect the educational services of what remained known as the Merry-Go-Round Youth Theatre. The program tours 70-plus school districts across the state every year, and in 2018, began operating the West End Theater at the former West Middle School.

"We needed a new name that would allow us to not only house everything, but show respect for our legacy and continue that growth in the future," Smock said.

As a result of that lack of cohesion in its brand, Smock continued, "People didn't know how to refer to us. In this area, certainly in Auburn, it's the Merry-Go-Round Playhouse. But in New York (City), it's Finger Lakes Musical Theatre Festival. We're almost exclusively known there as Finger Lakes, for short. And around the country it's a blend of those two things. In London, it's Finger Lakes."

The organization began talking about its need for a more cohesive name in 2015, Smock said, and began working with a consulting agency and polling its audiences in 2017. Toward the end of that year, it hired The Martin Group, of Victor. After a few months of discussion, the communications agency came back with about a dozen name ideas.

The Rev Theatre Co. was a variation on one of those ideas, Smock said, which materialized during conversations between the organization's staff and board members. It's not short for anything, nor an acronym. But the word "Rev" suggests multitudes, Smock continued, including the energy of an engine, the revolution of the former carousel at the Owasco playhouse and reverence for the organization's 60-plus-year history. And it's just short and easy to say, he said. It also lent itself to a bold new, purple-hued logo with a spotlight theme.

"I want anyone who interacts with us to immediately be able to identify our culture, our vibe, our energy," he said. "And the logo reflects that."

Smock said the organization will spend the rest of the year and early 2020 overhauling its website and print materials, messaging the name change to school districts and the theater community, and otherwise rebranding the festival as The Rev. He hopes the transition will be complete by the time single ticket sales for the organization's 2020 season begin in February or March. Smock also noted that the Merry-Go-Round Playhouse will remain the name of that theater, though the Merry-Go-Round Youth Theatre is subject to its own new title.

Just as important as "The Rev," though, is the "Theatre Co." part of the organization's new name. Unlike "Playhouse" or "Festival," it captures the entirety of what Smock and his staff (20 full-time, 225 seasonal) do, he said, from shaping new musicals through The Pitch to bringing theater to elementary schools. And as The Rev, that artistic mission won't change at all.

"The Rev puts at the forefront that we're a theater organization that operates two principal divisions — education and professional musical theater — and that our presence in this community is exactly the same as it has been," he said. "There's nothing else that changes."

In his Wednesday night remarks at the Owasco playhouse, Smock also announced the first season of shows the theater organization will present as The Rev Theatre Co.

Leading off the 2020 season at the Merry-Go-Round will be "Rocky: The Musical" (June 10-July 1). Based on the 1976 boxing classic starring Sylvester Stallone, the show will be coming to a U.S. theater for the first time since its 2014 Broadway run. For an additional ticket charge, 60 audience members will be seated ringside, on stage, for the second half of the show, Smock said.

Next will be "Witness Uganda" (July 8-29), a true story about a young American man who volunteers for a teaching project in the African nation. It will be the fourth time the show has ever been performed, Smock said, and he called it "one of the most inspirational stories I've ever witnessed on a stage."

As New York State Fair fever sets in, The Rev will bring "Rodgers and Hammerstein's State Fair" to the playhouse Aug. 5-26. After that, from Aug. 28 to Sept. 3, Dixie Longate will return in "Dixie's Tupperware Party." The drag performer's other show, "Never Wear a Tube Top While Riding a Mechanical Bull," "did overwhelmingly well" at the playhouse in July, Smock said.

2014: 'The Church Basement Ladies in the Last (Potluck) Supper'

The Rev Theatre Co.'s first full season under that name is in flux due to the coronavirus pandemic, but its plans will be announced soon. 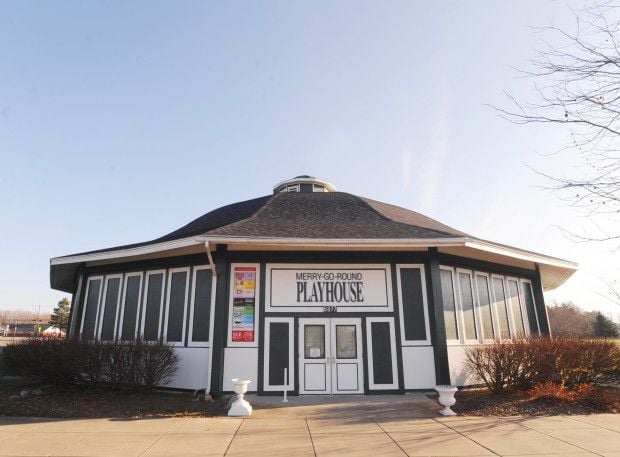 The Merry-Go-Round Playhouse in Owasco.