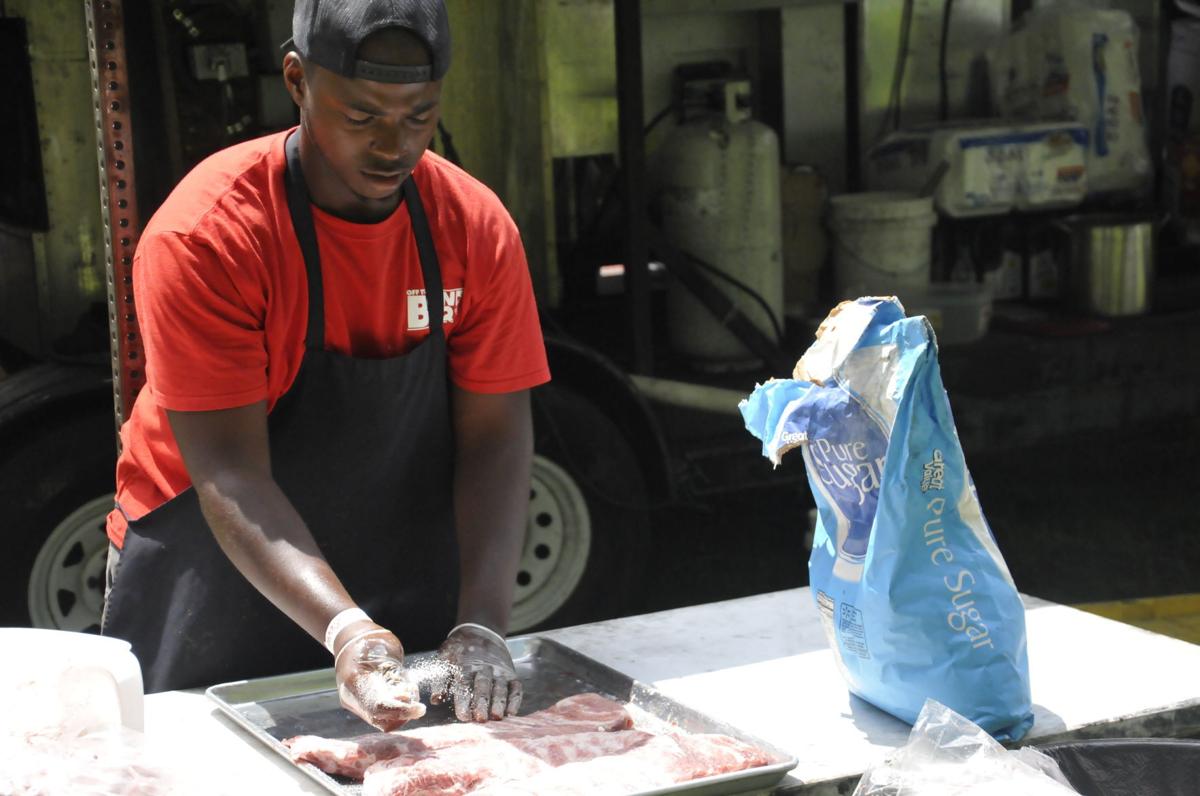 Off the Bone owner Pete Marshall sprinkles sugar on his "award-winning" ribs at the Auburn Rotary's Ribs, Rhythm and Blues Festival Saturday at Emerson Park. 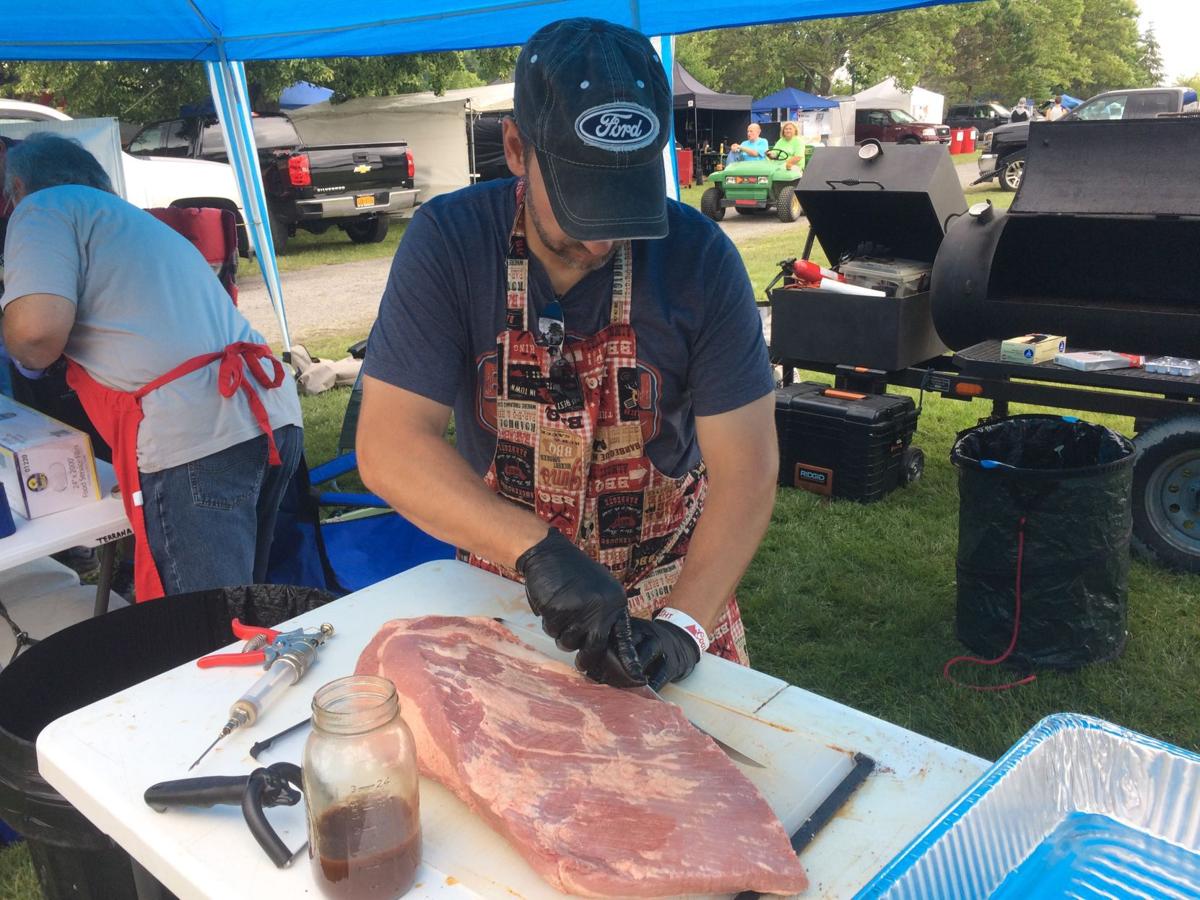 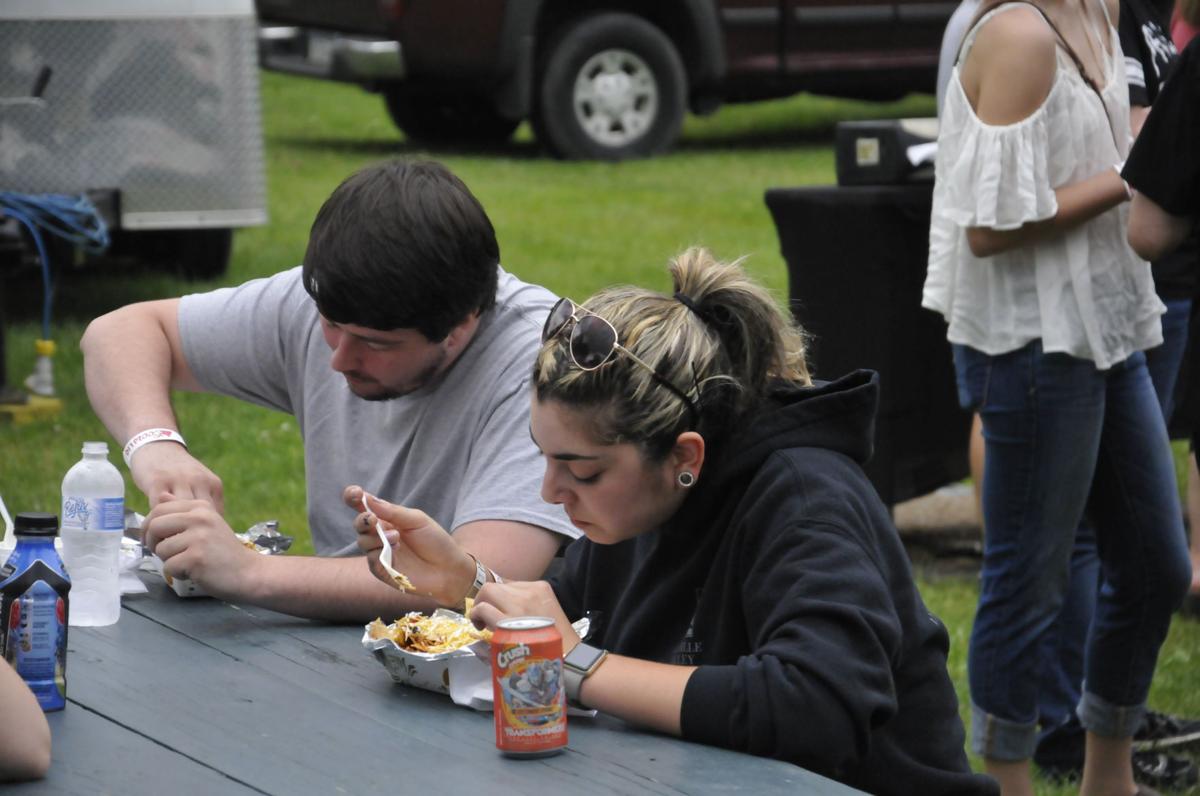 Festival-goers chow down on pulled pork nachos from The Chicken Bandit food truck at the Auburn Rotary's Ribs, Rhythm and Blues Festival Saturday at Emerson Park.

A smoker sits next to Owasco Lake during the Auburn Rotary's Ribs, Rhythm and Blues Festival Saturday at Emerson Park.

OWASCO — Mike Luksa said his wife, Pat, makes the best ribs he's even eaten, but the ribs from Off the Bone BBQ, a Columbus, Ohio-based barbecue restaurant, were "excellent" as well.

The Luksas tried these ribs and other barbecue favorites from local and out-of-state vendors at the Auburn Rotary Club's inaugural Ribs, Rhythm and Blues Festival at Emerson Park in Owasco Saturday.

Starting at noon on Sunday, 28 teams will compete in a barbecue cook-off for a chance to win an automatic bid to the Jack Daniel's World Championship Invitational Barbecue in Lynchburg, Tennessee, in October and a cash prize. The winners will be determined by judges from the Kansas City BBQ Society.

Off the Bone owner Pete Marshall is no stranger to the competitive cooking world. A stand outside his truck boasts over half a dozen trophies from recent barbecue contests.

Marshall said he and his team compete in 18 events a year, usually in southern and western states. When he heard about the festival in Auburn, he was eager to take part because he doesn't travel to the Northeast for competitions very often.

The Off the Bone team will cook their "award-winning" ribs, pork and brisket during Sunday's competition and sell them all weekend, along with chicken, sausage and sides such as cornbread and macaroni and cheese.

Not all the competitors are as experienced as Marshall. Corey and Karen Gurrette of Comfortably Rubbed are first-time barbecue cook-off participants.

The Elbridge couple saw a post for the festival on Facebook and threw together a team of family and friends. Corey Gurrette said the team will make chicken, ribs and pork and are selling their chicken to festival-goers, along with fresh-squeezed lemonade made by their kids.

Buffalo-based team Holy Smokes spent Saturday preparing for the competition and "just having a good time," Don Grande said. The team came together nine years ago just for fun. They compete in three competitions a year.

Grande and team member Gary Terrana said they have grown to love the barbecue competition circuit, adding that the teams are all very supportive of each other.

"It's a community," Terrana said.

The Holy Smokes will be serving chicken, ribs, pork shoulder and brisket during Sunday's competition. Grande said the team's ribs were ranked 13th in the county for teams who compete in five or fewer events per year.

In addition to barbecue, local vendors Mesa Grande Taqueria and Ciao are selling Mexican and Italian fare, respectively. Local wineries and breweries are providing alcoholic beverages to those with the proper I.D. and the Auburn Players are selling cotton candy and snow cones.

Live blues music will accompany the festival throughout both days.

What: Ribs, Rhythm and Blues Festival

Cost: $10 for adults; $5 for children 12 and under. For more information, visit www.auburnrotarybbq.org.

HIT: To the swearing in of Stacy DeForrest as Auburn's head corporation counsel, the first woman to hold the post in city history.

The Auburn Rotary Club has announced that its Ribs Rhythm & Blues Festival will return for a second year Saturday and Sunday, July 21 and …

Off the Bone owner Pete Marshall sprinkles sugar on his "award-winning" ribs at the Auburn Rotary's Ribs, Rhythm and Blues Festival Saturday at Emerson Park.

Festival-goers chow down on pulled pork nachos from The Chicken Bandit food truck at the Auburn Rotary's Ribs, Rhythm and Blues Festival Saturday at Emerson Park.

A smoker sits next to Owasco Lake during the Auburn Rotary's Ribs, Rhythm and Blues Festival Saturday at Emerson Park.