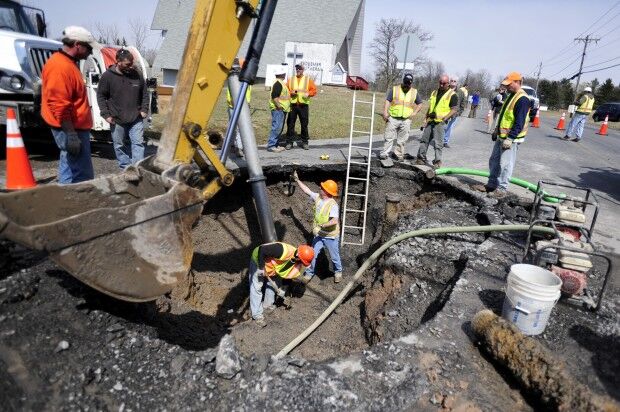 Crews work to repair a water main break in Auburn in 2013.

Whether it's aging bridges and roads or the need for high-speed internet access, there is consensus that Congress should approve a large infrastructure package.

The question is, what should be in the package?

Balter, D-Syracuse, supports the creation of a Works Progress Administration-style program to invest in infrastructure projects and create jobs. The Works Progress Administration was a New Deal program established by President Franklin D. Roosevelt that led to the construction of buildings and roads. It provided jobs to more than 8 million Americans.

"I think that is incredibly important now as we are thinking about how we can recover from the COVID-induced economic crisis," Balter said. "Thirty million people lost jobs. We need to get people back on their feet, and this is a great way to do it."

To improve the nation's infrastructure, Balter thinks it will require multiple packages. She says the basics — bridges and roads — should be on the list. She mentioned a project of a regional significance, Interstate 81 in Syracuse, as an example.

Beyond bridges and roads, she supports investments in water systems. She wants to ensure that lead pipes aren't being used to deliver water to residents, but she's also concerned about the environmental damage that can happen if an aging line ruptures.

One lesson from the pandemic is the need for investments in broadband. She believes that's not only important for rural communities, where coverage can be spotty, but also for urban areas.

"With all of the stuff that we're having to do remotely, especially education for our kids and access to business, it is a huge problem that large portions of our community don't have reliable access," she said.

Modernizing the electric grid is also a priority for Balter. She included this in her proposals to address climate change, but it's also an infrastructure challenge. She noted that with the advent of renewable energy, there needs to be an effective way to transport that energy to communities. Improving the grid, she said, could create "tons and tons" of jobs.

"We've got to get public transit into parts of our communities that don't have currently have it," she said. "Creating it creates jobs, but it's really important. It's one of the barriers that we've had for a long time for people becoming fully employed."

Katko, R-Camillus, thinks he has the right plan for a national infrastructure package.

In 2018, Katko co-chaired a working group within the Problem Solvers Caucus, a coalition of Democrats and Republicans in Congress. The working group's task was to develop a national infrastructure plan.

The group released its report that year. The 16-page document proposed ways to address aging highway infrastructure, expand broadband access and make improvements to harbors and other water infrastructure.

He shares Balter's view that the COVID-19 pandemic has highlighted the need for broadband access. There has been more attention to the lack of high-speed internet in some areas because of children who are forced to learn remotely instead of being in classrooms and for doctor's offices that shifted to telehealth amid the public health crisis.

The plan co-authored by Katko would aim to expand broadband access, especially in unserved or underserved rural areas. He told The Citizen in 2018 that if people aren't connected to the internet, "they're not connected to the modern economy."

There are other elements that he would include in an infrastructure package. He used I-81 as an example when discussing the need to streamline the administrative processes with infrastructure projects.

"It takes way too long to get a project approved and up and running," he said.

He also wants to fix the Highway Trust Fund and ensure there is proper funding for surface transportation projects. That was an issue addressed by his working group in the 2018 report. One proposal they floated is raising the federal gas tax to increase the funding available for infrastructure projects. The federal gas tax hasn't been changed since the early 1990s.

Katko hoped that infrastructure would've been part of a COVID-19 relief bill. Regardless of when it's finally addressed, he thinks congressional leaders and the president should consider his working group's plan.

"I think it really could be the catalyst for what we do going forward," he said.

Get Election 2020 & Politics updates in your inbox!

Keep up on the latest in national and local politics as Election 2020 comes into focus.

Days before early voting begins and with less than two weeks to go until Election Day, Democratic congressional candidate Dana Balter is calli…

When Owasco Lake's water quality was threatened, Dia Carabajal was among the Auburn officials who worked with Owasco Supervisor Ed Wagner to p…

Early voting in Onondaga County: Where to vote, hours and more

Beginning next week, you can vote in person in New York.

ALBANY – Over the past decade, more than 700 reviews of child deaths in New York were kept hidden by a state agency, decisions denying the pub…

ALBANY — The rate of COVID-19 infections has risen enough in New Jersey, Pennsylvania and Connecticut to require those states' residents to qu…

Putting off your NY auto inspection? You have until Nov. 3 to get it done

ALBANY – Motorists who let their annual vehicle inspection lapse during the COVID-19 pandemic will have to get their cars inspected by Nov. 3 …

ALBANY — New York may have to consider changes to its quarantine rules for out-of-state travelers now that two of its closest neighbors, Conne…

Cayuga County official, Democrats share in TV ad why Katko, not Balter, is best for CNY

One of Cayuga County's county-wide elected officials is among those featured in a new television commercial supporting Republican U.S. Rep. Jo…

Crews work to repair a water main break in Auburn in 2013.