The Citizen, through a Freedom of Information Law request, obtained 56 pages of emails and other documents exchanged between Hochul's office and local Democrats. The emails reveal Susman's strong interest in the position, the backing he had from the Cayuga County Democratic Committee and that the governor's office seriously considered his resume. He was interviewed twice in a three-week span, first on Dec. 22, 2021, and again in early January.

The fast-moving process ended without a gubernatorial appointment. In a Feb. 2 email to Marty Mack, Hochul's appointments secretary, Susman thanked him for his consideration. A significant portion of the email was redacted by the governor's office, which said its disclosure "would constitute an unwarranted invasion of personal privacy." The Citizen unsuccessfully appealed the redaction.

Susman's email continues, "I really only wanted the best for Cayuga County and our Governor in this upcoming election. It's a shame that I won't get the opportunity to make the necessary changes here and help the (Democratic) ticket this fall."

Budelmann's election to serve as a Cayuga County Surrogate Court judge meant there would be an opening once he resigned as district attorney. Under the state Public Officers Law, the governor has the authority to appoint an acting district attorney when a vacancy occurs.

Hochul's predecessor, former Gov. Andrew Cuomo, did not use this power. Whenever a district attorney resigned, he declined to appoint an acting DA. The offices were filled at the next general election.

Carabajal told The Citizen in December 2021 that there were conversations with the governor's office about the vacancy. She did not identify any potential candidates for the appointment.

However, the emails show that Susman was already the top contender for acting district attorney — if Hochul was willing to appoint him. In her email to Deacon on Nov. 7, Carabajal endorsed Susman for the job.

"His first time showing in the political arena has been impressive," Carabajal wrote. "I know he knows what it takes to run in future elections. That is why I strongly recommend him for consideration by Governor Hochul to fill the Cayuga County District Attorney position that will become vacant in January."

She continued, "A strong candidate for this position will help all Democrats running in this county. The DA position will be elected in November 2022 by a special election."

Carabajal also attached a photo of Hochul and Susman from when the then-lieutenant governor visited Auburn in July 2021, shortly before she became governor. The governor's office did not include the photo in its response to The Citizen's FOIL request.

Eight days after Carabajal contacted Deacon, records show Susman sent his first email to the governor's office. He attached his cover letter, resume and included "request for interview" in the subject line. He criticized Budelmann and noted that Brittany Grome Antonacci, who became acting district attorney in December, was Budelmann's "hand-picked successor."

Susman believed he could win a countywide election if he was appointed as acting district attorney. And in what proved to be an accurate prediction, he wrote that "there will likely be a (Republican) candidate running unopposed in 2022" if the governor did not make an appointment.

Susman's first interview was conducted via Zoom on Dec. 22. According to an email, six members of Hochul's staff were included on the invitation to join the virtual meeting.

Prior to the interview, top Cayuga County Democrats sent letters of recommendation in support of Susman. Carabajal formalized her earlier endorsement with a letter touting Susman's ability to help other candidates on the Democratic ticket. She pledged that her committee would endorse and support him "as an incumbent DA candidate."

Aileen McNabb-Coleman, who was then chair of the Cayuga County Legislature and continues to serve as a lawmaker, urged Hochul to appoint Susman as acting district attorney.

"My work as chair of the Cayuga County Legislature and work as the acting Administrator for the county gives me a rate perspective on what is needed to propel the office of the DA forward," McNabb-Coleman wrote. "The culture in the District Attorney's office could benefit from restructuring. Mr. Susman's appointment will afford us that opportunity."

While Susman garnered the most attention, there were others who expressed interest in the appointment. Grome Antonacci, who launched her campaign for a full term as the county's top prosecutor on Dec. 16, sent her resume to Mack on Dec. 17. She interviewed with the governor's staff on Dec. 23, one day after Susman's initial interview.

Former Auburn City Court Judge Michael McKeon submitted a cover letter and resume but quickly withdrew from consideration. In an email, he informed Mack that he had lunch with Susman and learned that Susman intended to seek the appointment. McKeon confirmed in a phone interview with The Citizen that he "briefly considered" pursuing the gubernatorial appointment, but bowed out after his conversation with Susman.

After Susman's first interview, he followed up on Dec. 28 with an email to Charlene Cordero, another Hochul aide, and Mack. He notified them that Budelmann would be sworn in as Cayuga County Surrogate Court judge on Dec. 30 and thanked them for the interview.

"I understand that an appointment would be a bold move," he wrote. "However, we need boldness in this current political climate. We need to change the status quo in this County, and this is a rare opportunity to do so." He then criticized Grome Antonacci's lack of Cayuga County ties — she is an Onondaga County native — and the support she received from the Cayuga County Conservative Party.

On Dec. 30, Mack replied to Susman and informed him that they wanted to schedule another interview. The second interview took place during the first week of January. A week later, Susman sent an email thanking Mack for the conversation.

When The Citizen first contacted Hochul's office about the Cayuga County district attorney vacancy in December, a spokesperson said the governor was "reviewing her options and will have more to share in the future."

For a follow-up story in late January, a spokesperson referred The Citizen to the same statement.

At that time, Grome Antonacci shared an email she sent to the governor's office expressing concern about the inability to fill vacant positions within her office due to the uncertainty of whether Hochul would appoint a new DA.

"I have several candidates that are willing to accept the positions under my leadership, but understandably want to make an informed decision before they relocate and/or leave their current employment," Grome Antonacci wrote. "Given that it is longstanding precedent in New York state for the governor to not disrupt the vital work of the district attorney's office for such a short period of time, it would be helpful to advise my staff and potential employees on the status of this determination."

Mack replied to Grome Antonacci's email, sent on Jan. 21, and told her that he would call her with an answer the following week. Grome Antonacci told The Citizen she never received a call from Mack.

But Mack did have a phone conversation with Susman that week. On Jan. 29, he sent an email to Susman asking him to call. The reason for the call was not disclosed.

Four days after the call, on Feb. 2, Susman emailed Mack to thank him "for the consideration for the position." Between that and Susman expressing regret he "won't get the opportunity to make the necessary changes here and help the (Democratic) ticket this fall" is the redacted passage.

Susman declined to comment in an email to The Citizen on Wednesday.

There was at least one other local attorney who considered seeking the appointment. Records show Nate Garland, the city of Auburn's assistant corporation counsel, emailed his resume to Mack on Feb. 1.

Garland has experience working in the Cayuga County District Attorney's Office. Before taking the position with the city, he was an assistant district attorney.

"I thought I have more experience as an assistant district attorney than anyone outside of the DA's office and more than some people in the DA's office, so why not throw my hat in the ring?" he told The Citizen.

But after Garland went on vacation and weighed the demands of the job, he said it "didn't make sense for me and my family." He never interviewed for the position.

On Feb. 6, Grome Antonacci wrote on her Facebook page that there was a "backroom deal" between Hochul's office and Cayuga County Democrats to appoint an acting district attorney. However, Susman was no longer being considered and no one else interviewed for the job.

Hochul did not have to appoint an acting district attorney for local Democrats to nominate a candidate for the upcoming election. But when the petition filing deadline passed in early April, it was official: Grome Antonacci would run unopposed for a full four-year term as district attorney.

A Hochul spokesperson told The Citizen on Thursday that "multiple candidates expressed interest and were interviewed for this position, and a decision was made not to proceed with an appointment." 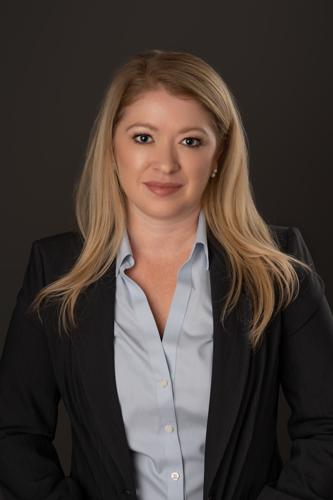 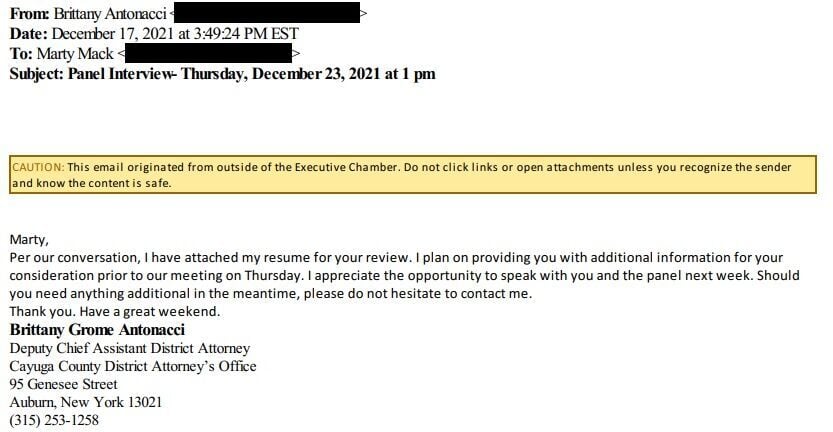 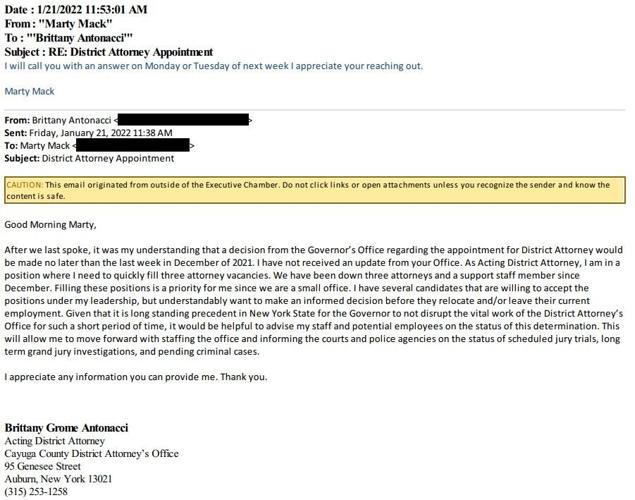 The final email from Ben Susman to Marty Mack. 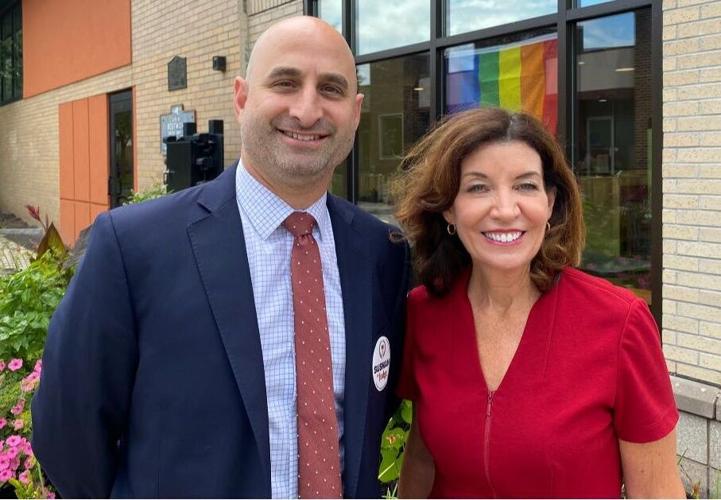 Ben Susman, an Auburn attorney, is pictured with then-Lt. Gov. Kathy Hochul in 2021 in this photo posted by Susman's campaign for Cayuga County Surrogate Court judge. After losing his bid for that office in November, Susman sought to have Hochul, who was now governor, appoint him as acting Cayuga County district attorney.