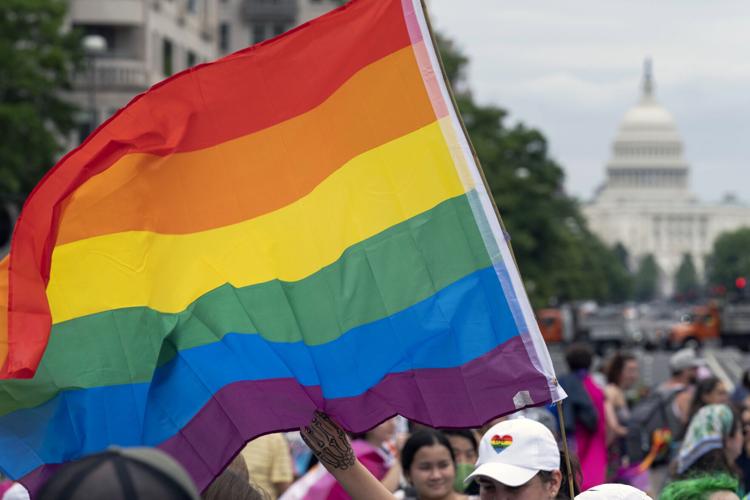 A person waves a rainbow flag as they participant in a rally in support of the LGBTQIA+ community at Freedom Plaza in Washington in 2021. The U.S. House overwhelmingly approved legislation Tuesday to protect same-sex and interracial marriages amid concerns that the Supreme Court ruling overturning Roe v. Wade abortion access could jeopardize other rights criticized by many conservative Americans.

Rep. John Katko, R-N.Y., speaks during a House Committee on Homeland Security meeting on Capitol Hill in Washington in 2020.

U.S. Rep. John Katko was one of 47 Republicans who voted for a bill that aims to protect interracial and same-sex marriages.

The House of Representatives on Tuesday passed the legislation by a 267-157 vote. The bill would repeal a federal law, the Defense of Marriage Act, that defines marriage as between a man and a woman. It also codifies protections for same-sex marriages following the Supreme Court's Obergefell vs. Hodges decision in 2015. The court ruled that it was unconstitutional for states to ban same-sex marriages.

U.S. Rep. Jerrold Nadler, who sponsored the legislation, named the Respect for Marriage Act, said it would "reaffirm that marriage equality is — and must remain — the law of the land."

Katko, R-Camillus, did not release a statement explaining his vote. He has previously voted for pro-LGBTQ legislation in the House.

Nearly every member of the New York delegation voted for the Respect for Marriage Act, including U.S. Rep. Elise Stefanik, the No. 3 House Republican, and U.S. Rep. Lee Zeldin, the GOP candidate for governor.

The lone nay was cast by U.S. Rep. Claudia Tenney, a Republican. In a statement, Tenney said she agrees with "the established jurisprudence that (the right for same-sex couples to marry) should be protected."

However, she accused House Democrats of attempting to "score cheap political points" and "advance the false narrative that the right of same-sex couples to marry is now under threat and that immediate legislative action by Congress is needed to safeguard it."

Democrats pushed for action in the aftermath of the Supreme Court's ruling that overturned Roe v. Wade. Supreme Court Justice Clarence Thomas wrote in his opinion that they "should reconsider all of this court's substantive due process precedents," including the Obergefell v. Hodges case.

But Tenney believes Democrats engaged in fearmongering to advance the legislation codifying same-sex marriage protections. Her statement concludes that the bill is "nothing more than a shamefully partisan stunt designed to distract the American people from the serious crises our nation faces today under their leadership, like rising crime, soaring inflation and a wide-open southern border."

The Respect for Marriage Act now heads to the Senate, where its fate is uncertain. U.S. Sen. Susan Collins, a Maine Republican, is one of the sponsors. But it would need nine other Republicans to end debate and vote on the bill.

The White House released a statement on Wednesday that said the Biden administration strongly supports the bill's passage.

"This legislation would strengthen civil rights, and ensure that the promise of equality is not denied to families across the country," the White House said in its statement of administration policy.

The Auburn City Council has formally accepted state funding for a project to improve Hoopes Park, including work on its iconic pond.

If U.S. Rep. Claudia Tenney gets her way, New York will be forced to lift a ban on a form of natural gas drilling or risk losing access to fed…

If an internal poll is any indication, U.S. Rep. Claudia Tenney is poised to win the Republican nomination in the 24th Congressional District.

SYRACUSE — As many Republicans across the country jockey for one man's support, Steve Wells is taking an old-fashioned approach to winning a c…

When President Joe Biden signs a bill that seeks to boost semiconductor chip manufacturing in the United States, there will be at least one Re…

Two central New York congressional candidates have released their latest campaign commercials, while another will embark on a district tour in…

Breaking down NY-24 poll: Why Tenney is in strong position to win GOP primary

Campaigns usually don't release internal polling unless there is great news to share.

Drought causes French river to be crossable by foot

Man acquitted in deaths of 7 motorcyclists

Man acquitted in deaths of 7 motorcyclists

A person waves a rainbow flag as they participant in a rally in support of the LGBTQIA+ community at Freedom Plaza in Washington in 2021. The U.S. House overwhelmingly approved legislation Tuesday to protect same-sex and interracial marriages amid concerns that the Supreme Court ruling overturning Roe v. Wade abortion access could jeopardize other rights criticized by many conservative Americans.

Rep. John Katko, R-N.Y., speaks during a House Committee on Homeland Security meeting on Capitol Hill in Washington in 2020.