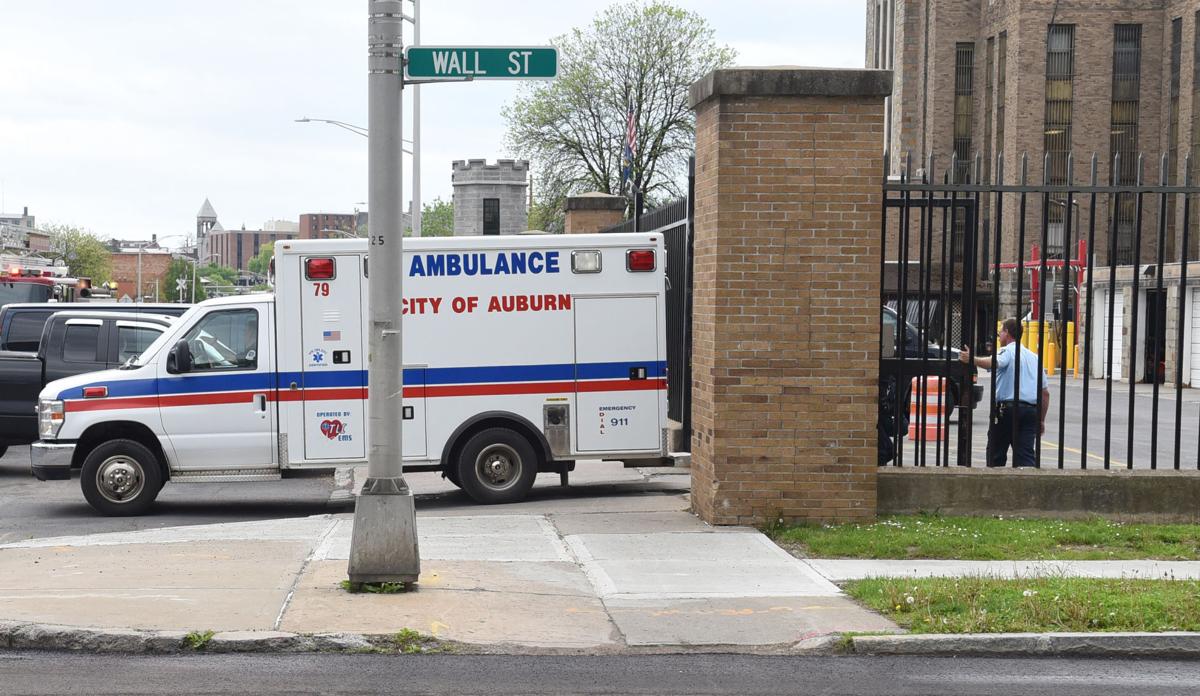 A TLC ambulance responds to Auburn Correctional Facility in 2019. 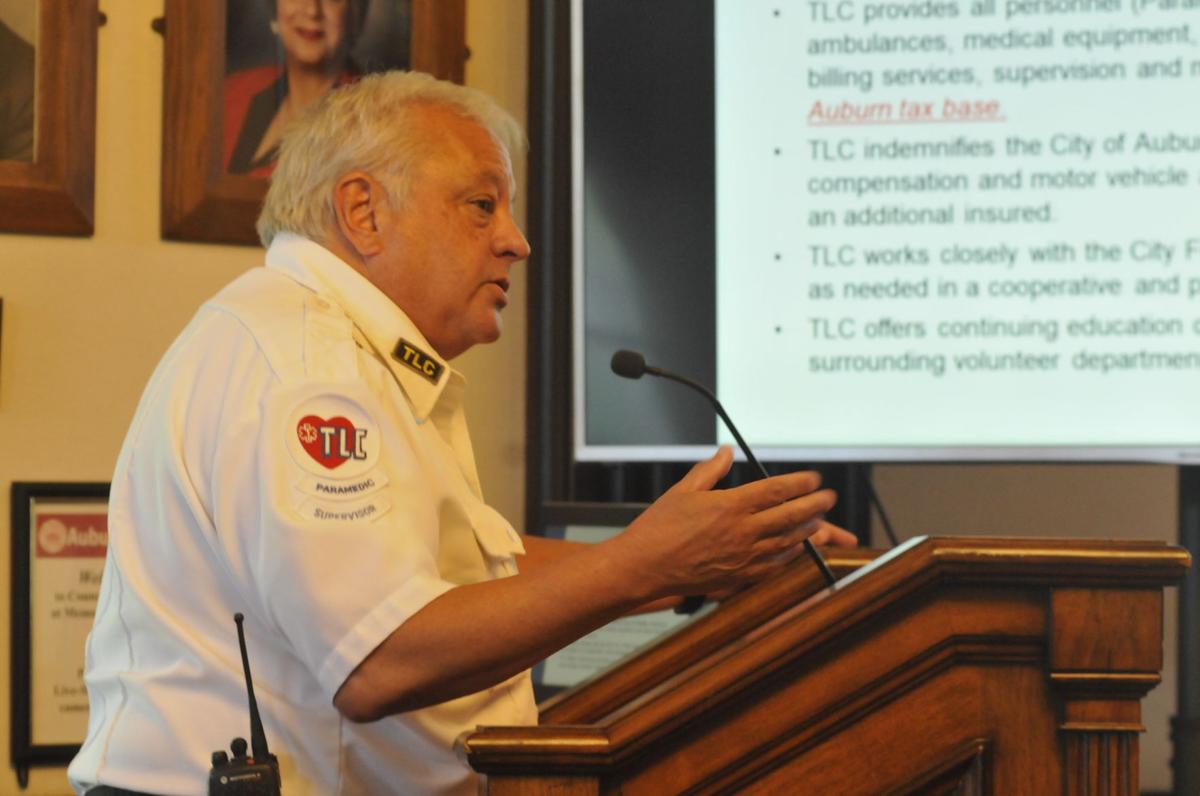 The company contracted to provide ambulance coverage in Auburn has responded to the city's latest proposal to create and run its own service, and it's asking Auburn officials to have an independent expert analyze the plan.

TLC Emergency Medical Services has provided ambulance coverage for Auburn under an agreement that stems back to 2006. Last month, Auburn City Manager Jeff Dygert proposed that Auburn terminate its relationship with TLC and manage its own ambulance service, an idea he had suggested in early 2020 but was put on hold because of the COVID-19 pandemic.

Dygert said the city wouldn't be doing this to make money but to "provide a higher quality of service and have some checks and balances." Dygert also said Auburn's interactions with TLC have sometimes been contentious, adding that the city has had concerns about TLC's availability and that TLC refused to provide some information the city sought in the request for proposal.

Under the heading "An open letter to the Auburn City Council and the Residents of the City of Auburn," Fricano said that TLC has responded to 90,523 emergency and non-emergency calls for service since 2006, all without a single formal complaint from the city.

He also said the city's plan is not financially realistic.

"In our opinion, municipal cost structures are so high that any attempt to create a new City (emergency medical services) department, hire the required number of employees and create other needed infrastructures will result in substantial tax payer subsidy," Fricano wrote. "The fees for service that can be collected in this community will not cover the costs of providing the service."

Fricano said other upstate municipalities have tried to start their own service but ultimately ended their operations due to costs and debt. He said Auburn adopted its current system, in which the city holds a municipal ambulance certificate of need from the state and contracts with TLC to provide the service, because of the challenges municipalities can face running their own operation.

Fricano asked that the city council get an independent professional analysis of both the current and proposed models and "the actual cost implications to the tax payer" before a change is made.

But if Auburn does decide to move ahead with its plan, Fricano said TLC will help and support the city's efforts in the "interests of public safety and continuity of service."

The emergency medical services contract between the city and TLC has been extended several times since mid-2018 as the city has explored long-term options, which could have included signing a new multi-year deal with TLC.

In December 2019, the city announced it would send out a request for proposals from additional providers. TLC and American Medical Response Inc. submitted proposals but a plan to have the city begin and manage an ambulance service of its own was brought forward in February 2020. By that July, however, Dygert said the concept had been set aside amid the COVID-19 pandemic and the economic difficulties it prompted.

Dygert said during the presentation last month that the startup cost was estimated to come to around $1 million, but it could be covered without prompting a tax increase. The plan includes 25 positions and wages and benefits packages meant to draw and keep employees. Once its operating, the city manager said, revenue from user fees would cover the cost of the operation.

In an interview with The Citizen Wednesday, Dygert addressed TLC's skepticism about the fees for service covering the city's costs. He said that when TLC provides ambulance rides in Auburn, the billing is done separately but the payments come through the city's treasurer's office, so the city knows how much revenue is coming in.

He added that the cost estimates the city has used have been "extremely conservative," taking worse case scenarios into account and considering variables including time off, repairs, insurance and more, so "we should have covered all of our bases."

In regards to having an independent analysis performed, Dygert said several people from different backgrounds have looked at the finances, operations and different aspects of the proposal. He said the city has reached out to people in the emergency medical services business throughout the state, and those responses were "for the most part, positive, that this is something that probably should be done."

"It hasn't been done in a bubble. It's not just a couple folks in a room coming up with a grand scheme, there has been an awful lot of outreach on this," he continued.

Quill said the possibility of a municipal-operated service came up when he served as the chief of the Auburn Fire Department. He added that he has "complete faith" in Dygert and his staff and that he is friends with Fricano and David Butler, the owner and CEO of TLC.

"But this is business. This is what's best for the city of Auburn. I know we're going in the right direction," Quill said. "Mr. Dygert's a very thorough, intelligent, thoughtful individual. If he wasn't comfortable with making this presentation, he certainly would not have done it."

The mayor also addressed Fricano's suggestion for an outside evaluation.

Dygert said the council is currently set to vote on the city-run ambulance proposal at the June 17 meeting. 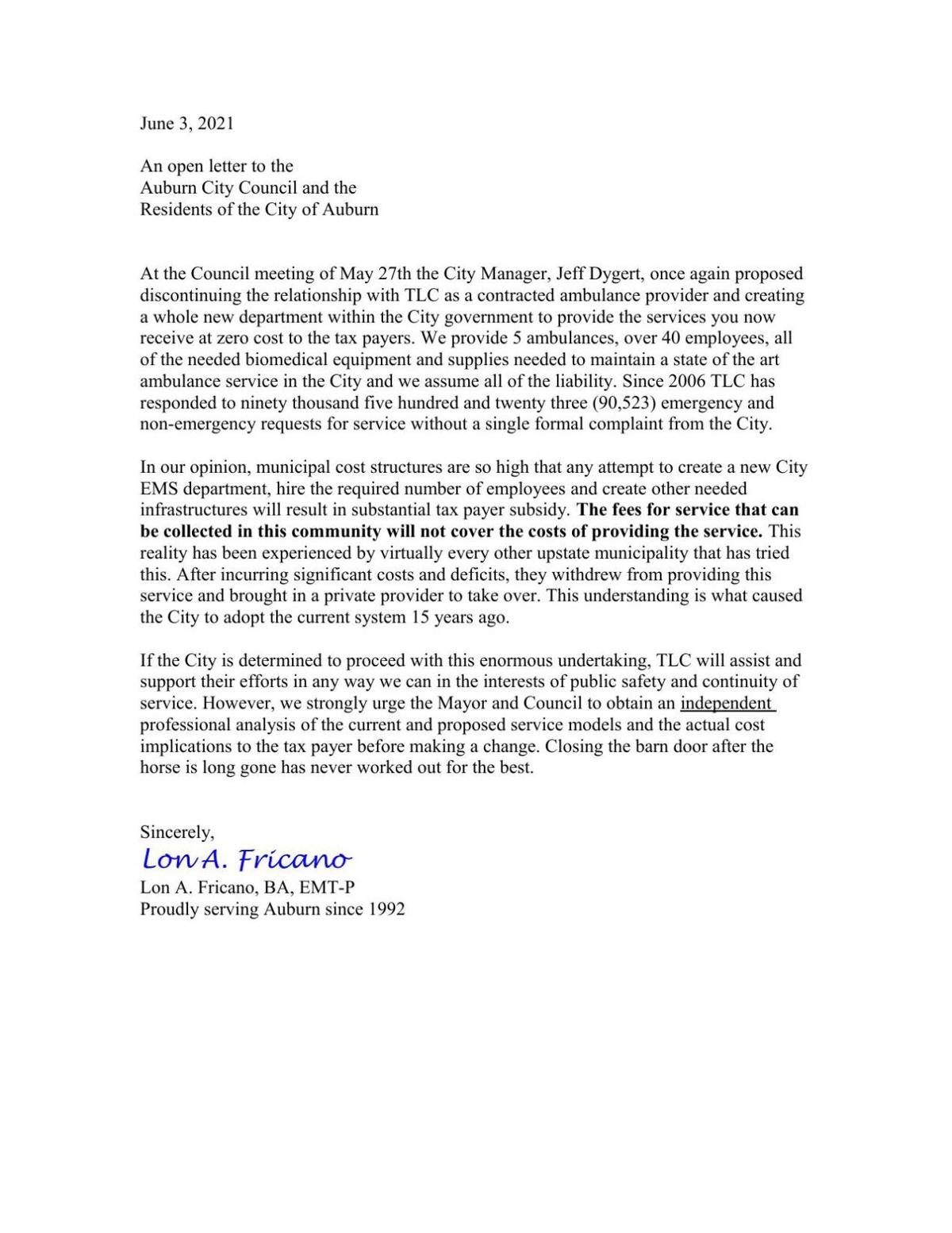 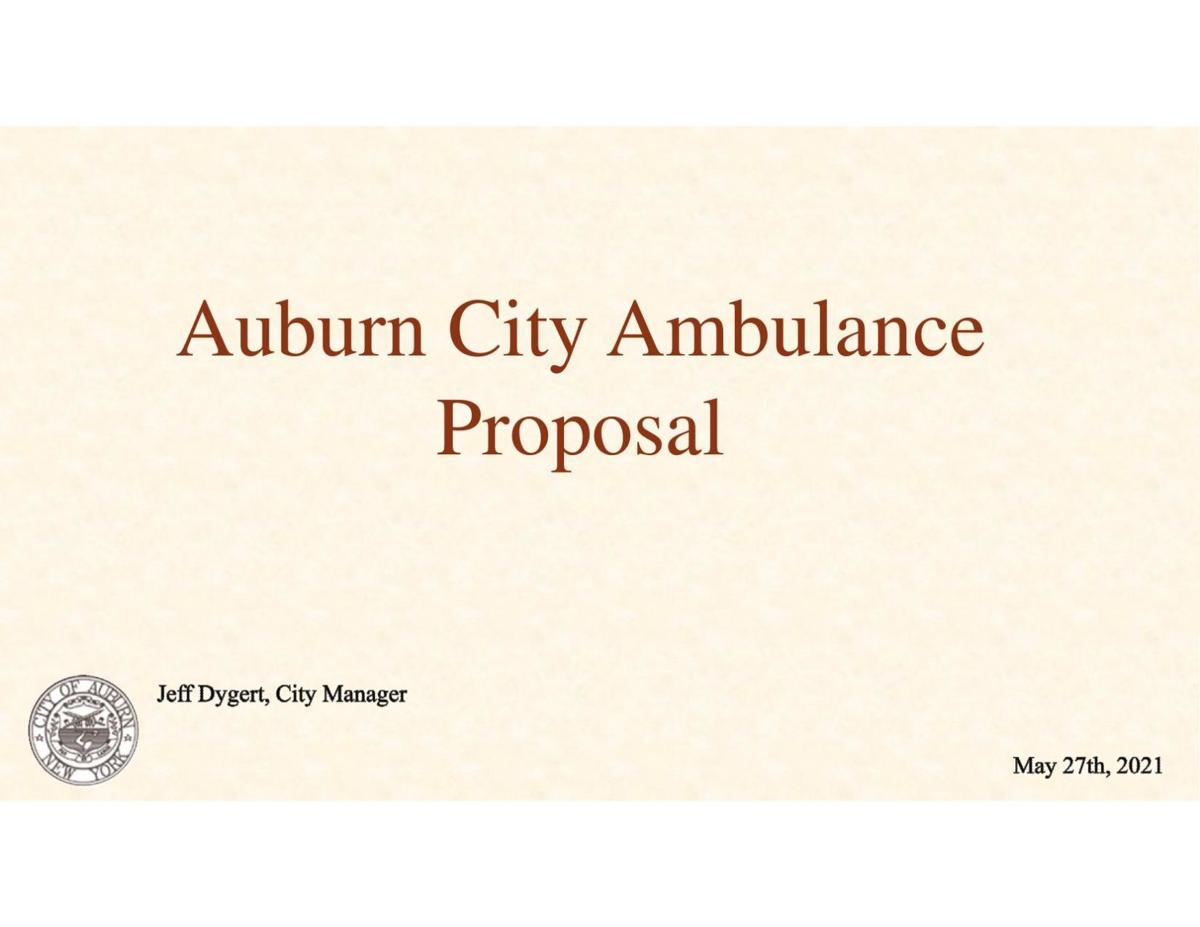 Our view: Outside review makes sense on Auburn ambulance plan

The Auburn City Council has a tough decision to make.

A TLC ambulance responds to Auburn Correctional Facility in 2019.