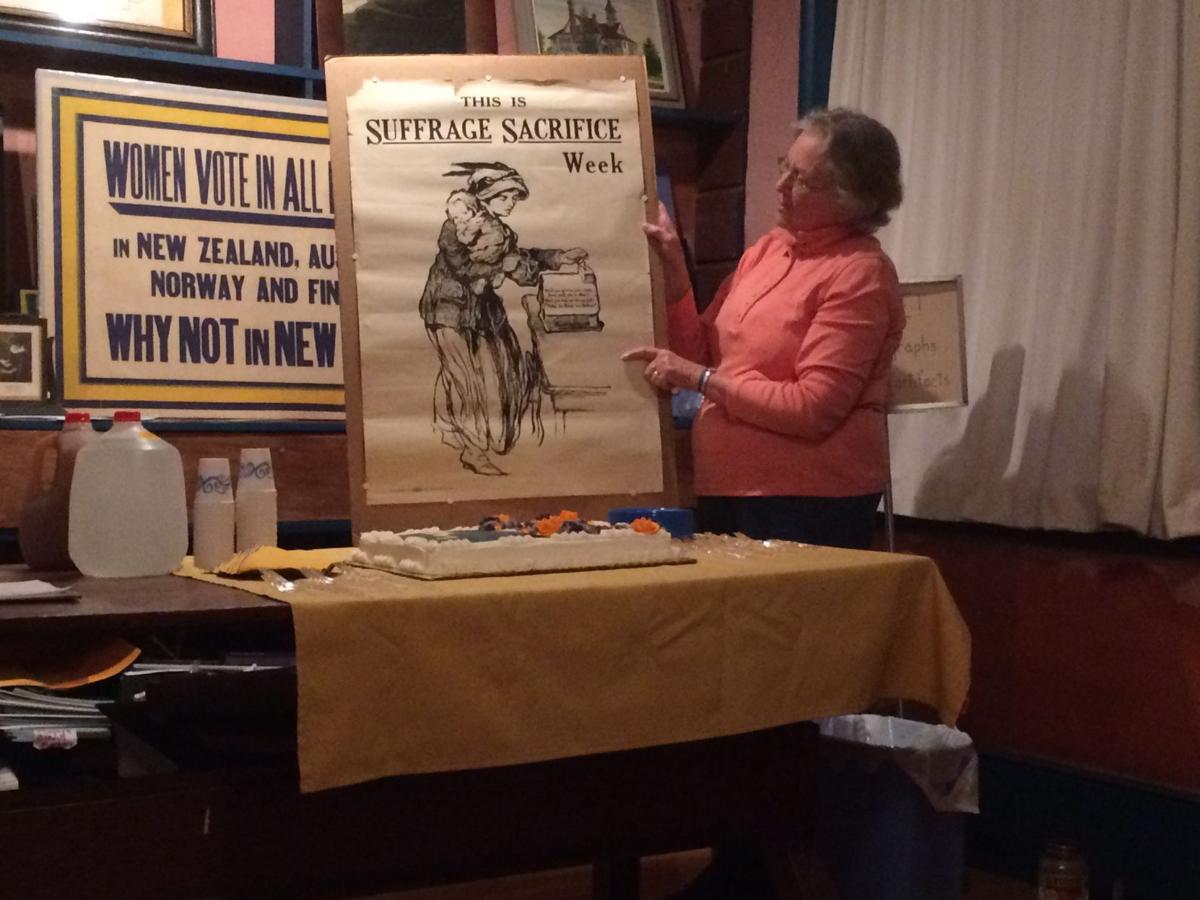 Carolyn Littlejohn shows off one of the posters in the museum's collection Sunday during a program at the Howland Stone Store Museum. 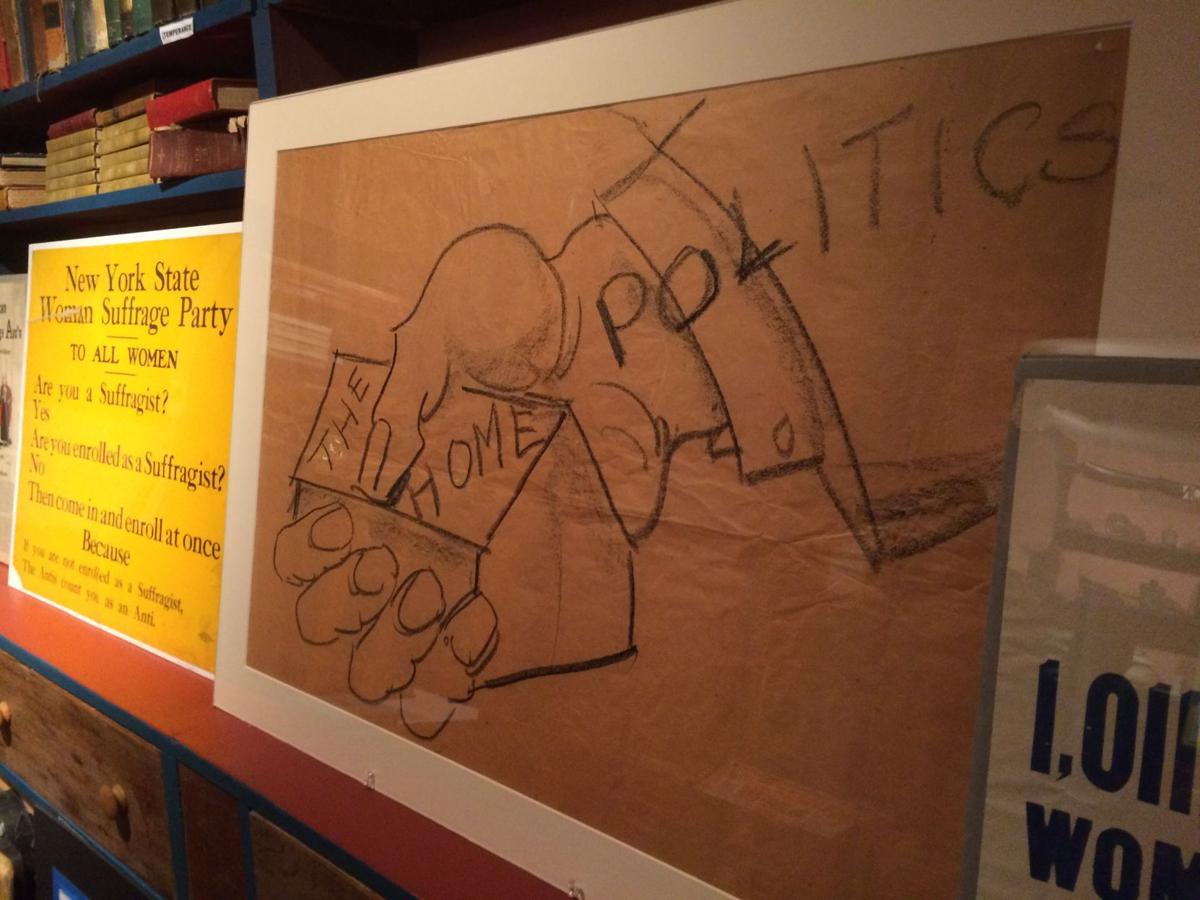 This poster was created by Lou Rogers in downtown Auburn during the women's suffrage movement. 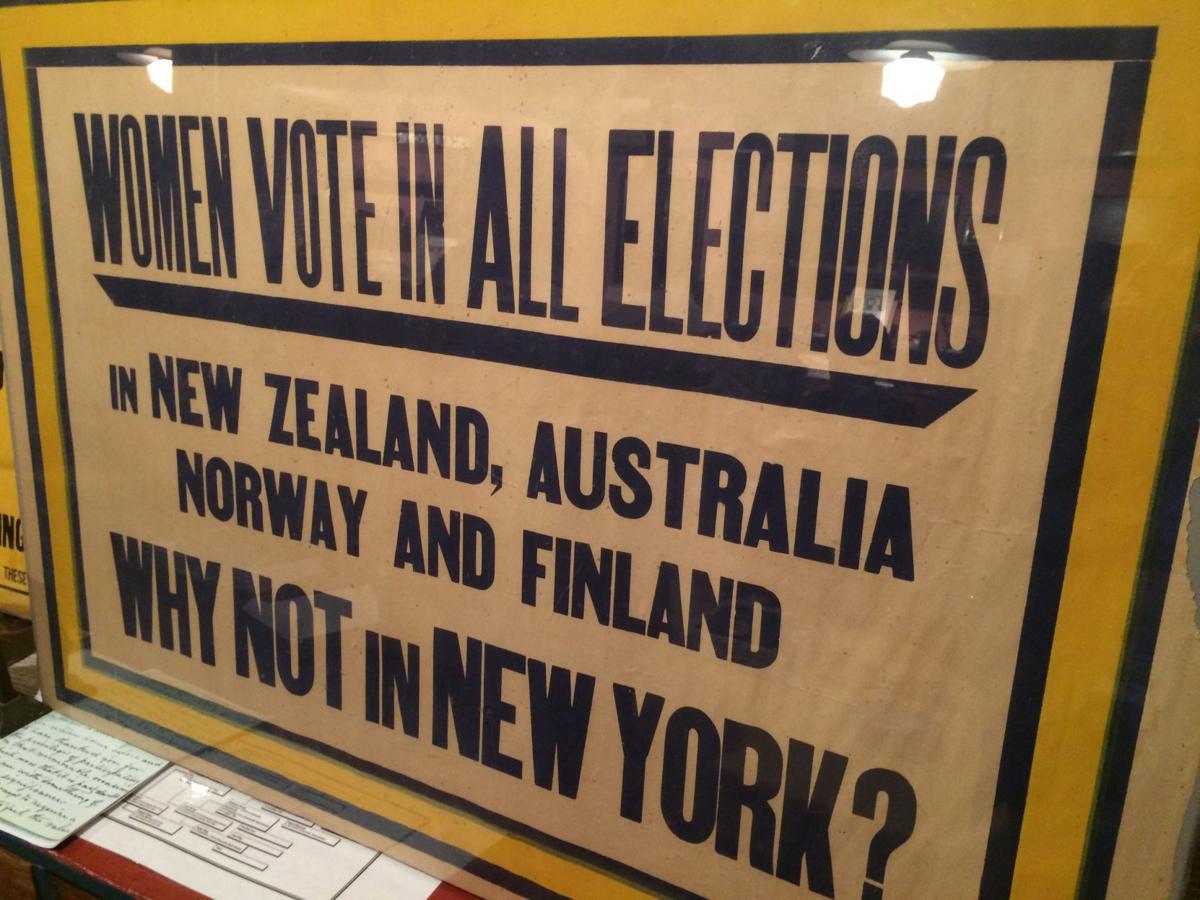 One of the posters in the Howland Stone Store Museum's collection.

SHERWOOD — On Nov. 6, 1917, women in New York state won the right to vote. Almost 100 years to the date, the Howland Stone Store Museum held a program Sunday to commemorate the historic event.

The museum was built in 1837 as a store by Slocum Howland, the father of suffragist Emily Howland. Museum board members showed off the museum's collection of women's suffrage posters. Vice President Patricia White said the posters were discovered inside the store in the early 1990s.

Many of the posters were discovered in good condition, former board member Ann Tobey said, but around six of them had to be restored. The posters shown during the program were all pro-women's suffrage, but the museum also owns some posters that advertised against women's suffrage. Those are currently loaned to the Cayuga Museum and the New York State Museum in Albany for their exhibits on women's suffrage.

"It's exciting to know that we have something here of national interest and significance," White said. "Important things did happen here in Sherwood."

Tobey and Carolyn Littlejohn, a current museum board member, both shared some background on the dozen posters displayed.

One poster, Littlejohn said, was created right in downtown Auburn. The charcoal drawing shows a man's hand, with the word "politics" written across the arm, gripping a house. It was drawn by the women's suffrage illustrator Annie Lucasta Rogers, known as Lou Rogers.

"What's also interesting about her (Rogers) is she would set up an easel on the street corner and its been documented that she did do this on the corner of Genesee and Exchange Street in Auburn on one of her stops," Littlejohn said of the poster. "This one in particular is interesting because you can relate it to today. Politics has a grip on our homes."

Tobey also shared with those in attendance that it took women in New York three years to win the right to vote. The question first appeared on the ballot in New York 1915, but it wasn't until 1917 when men in New York voted for women to be allowed to vote by a margin of 700,000 to 600,000.

"You can almost imagine the excitement that there would have been," Tobey said. "It was a very long, difficult fight."

After the presentation, the group sang happy birthday to Howland, known as Miss Emily, whose 190th birthday is coming up on Nov. 20. Howland died in 1929 at the age of 101.

Tobey said Howland is the only suffragist she can think of that actually lived through the entire women's suffrage movement and was able to vote in her lifetime. She showed the audience a photo of Howland headed out to vote for the first time in 1918.

"One of my favorite pictures is Miss Emily trudging off to vote," Tobey said. "She's in winter clothes, kind of huddled over, marching out to vote."

Starbucks to open location in Auburn

An employee at Finger Lakes Center for Living in Auburn tested positive for COVID-19 on Friday.

An 18-year-old Auburn man will serve six months in Cayuga County Jail but also have his criminal records sealed for a rape he committed last year.

'It's just crazy': Auburn's historic Willard Chapel hit by COVID-19 on all sides

If there's an economic ripple effect of the COVID-19 pandemic, Willard Memorial Chapel has felt it.

Officials in Cayuga County have supplies to give away to businesses, volunteer groups and non-profits operating amid the coronavirus pandemic.

Cayuga Community College is cutting jobs and raising tuition to balance its budget for the coming year.

Carolyn Littlejohn shows off one of the posters in the museum's collection Sunday during a program at the Howland Stone Store Museum.

This poster was created by Lou Rogers in downtown Auburn during the women's suffrage movement.

One of the posters in the Howland Stone Store Museum's collection.