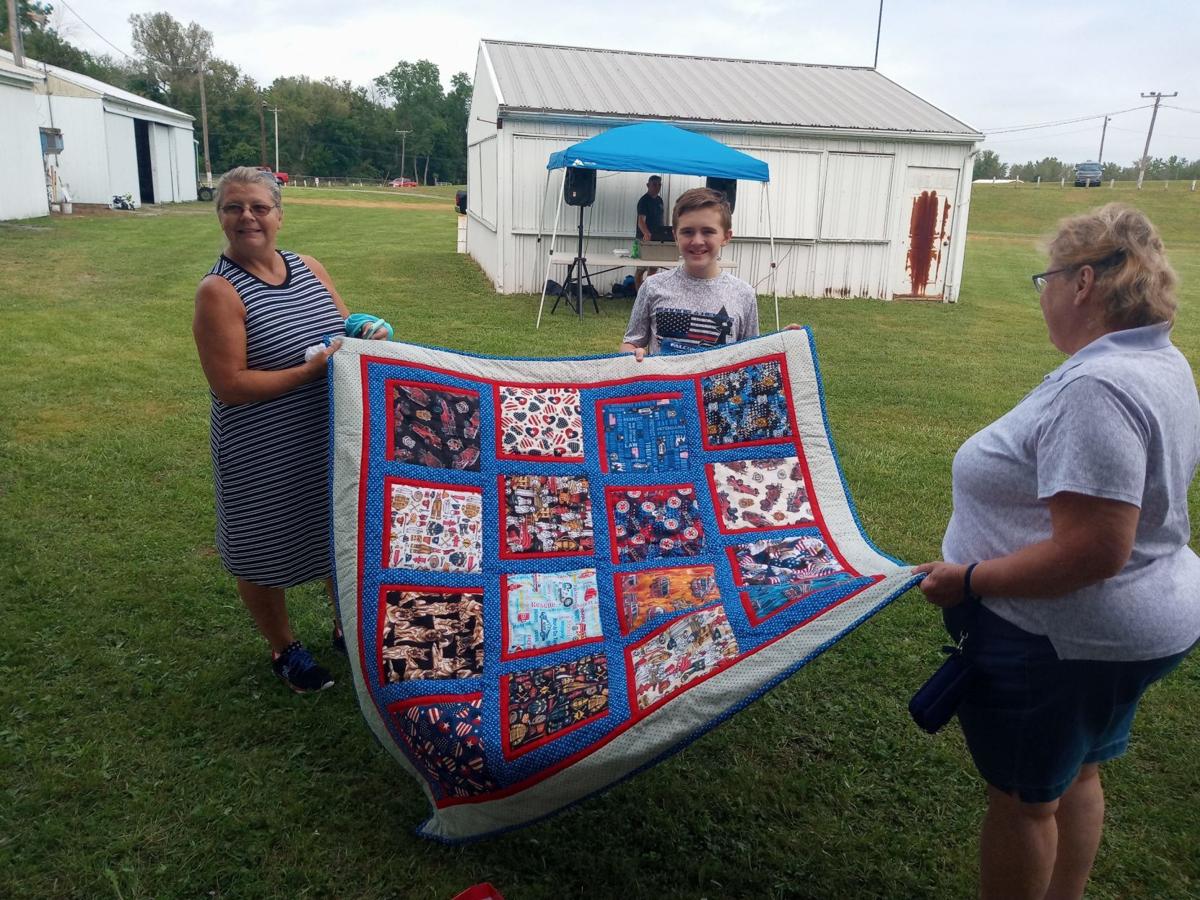 Zechariah Cartledge, 12, is presented with a quilt by Debbie Henderson, right, and Anne Chapman McLoud at a fundraiser at the Weedsport Fireman's Field Saturday. 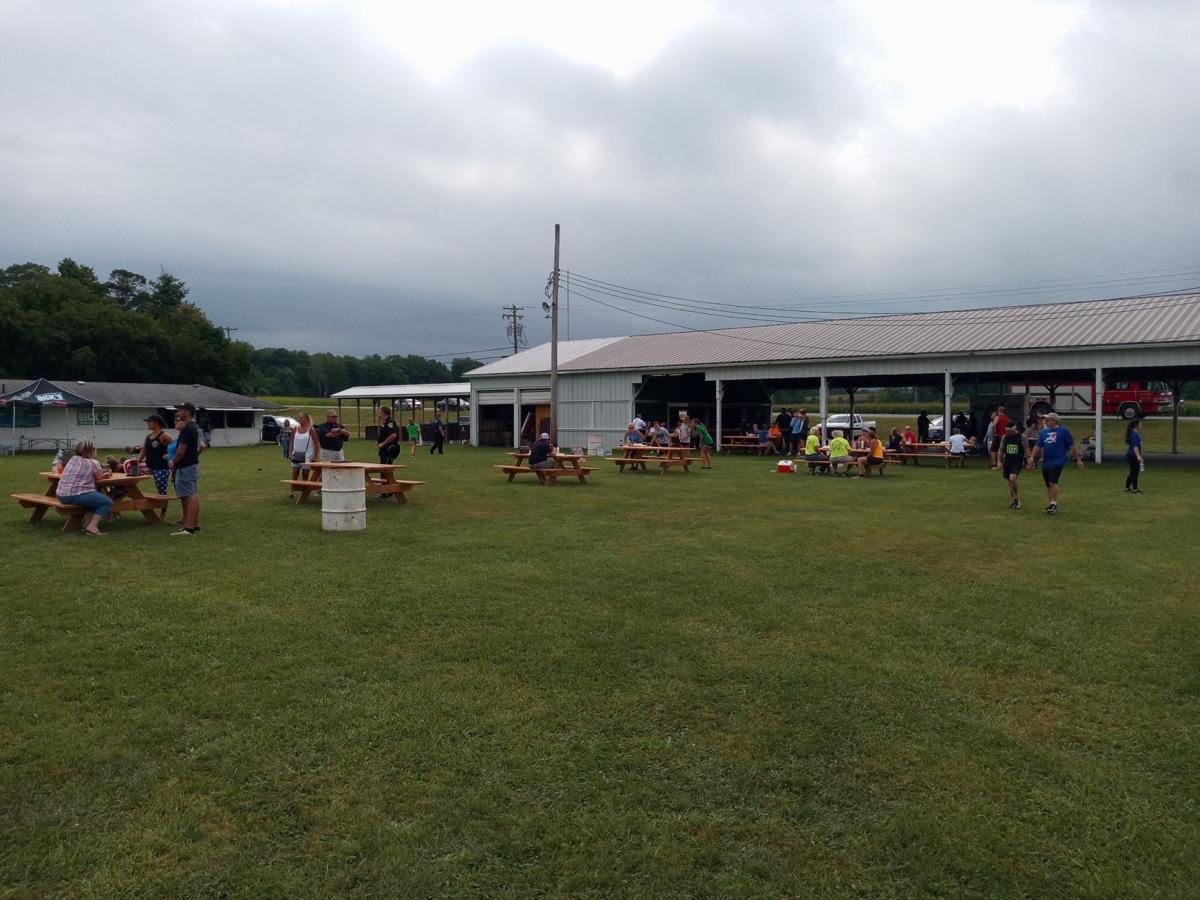 People spend time together at a fundraiser at the Weedsport Fireman's Field Saturday.

WEEDSPORT — An assortment of community members, law enforcement and others came together in Weedsport Saturday to honor fallen first responders.

Zechariah Cartledge, of the nonprofit Running 4 Heroes, was visiting to run a mile in honor of fallen first responders at Weedsport High School. Through these runs, the organization raises awareness and funds for the families of fallen first responders. A five-mile run with around 170 participants was held earlier in the day, with 12-year-old Zechariah among them. Proceeds from the event were set to go to the fire department, though a "considerable amount" will be going to Running 4 Heroes, said Wayne Hunter, a fire department member and co-organizer of the event.

The fundraiser was co-organized by Wayne and his son Dillon, a lieutenant with the fire department, though Wayne credited Dillon, a board member for Running 4 Heroes, with a lot of the work. At a meet-and-greet event at the Weedsport Fireman's Field with Zechariah, Wayne and Dillon said they were thinking about former first responder Stephen McLoud, who was Wayne's uncle and Dillon's great-uncle.

A former Cayuga County undersheriff who had been with the Weedsport Fire Department for 35 years, McLoud died in 2019 at age 59 from cancer connected to his service in New York City after the Sept. 11, 2001 terrorist attacks. Sunday, Aug. 29, will mark the two-year anniversary of his death and also would have marked his 40th wedding anniversary with his wife, Anne.

McLoud is one of the reasons why Wayne and Dillon feel strongly about honoring fallen first responders and wanted to get Running 4 Heroes involved in the event. Wayne, who noted that Zechariah ran in honor of McLoud in 2019, said he was happy to see so many people at the event. Saturday's event is meant to honor all fallen first responders, including McLoud. Though the Fireman's Field Days fundraiser from the Weedsport department couldn't be held last year or this year due to the COVID-19 pandemic, Wayne said he would like to hold the run again next year and hold it with the field days.

Cayuga County Sheriff Brian Schenck and first responders, such as members of the Fleming Fire Department, were also at the event. Dillon said it was "truly amazing to see how well such a small community comes together to support" the fire department and fallen first responders. He also thanked Zechariah and Running 4 Heroes for coming out to Weedsport.

"It's really heartwarming to see that there are youth out there who support first responders," Dillon said.

Another first responder being honored was James J. Monda, a New York state trooper who was working a marine detail on the Great Sacandaga Lake earlier this month. He went into the water at a boat launch and did not resurface. A state police vehicle from Monda's troop was set to come out to Zechariah's run later that day. Family members of Kevin “Bing” Crossley, a patrolman with the Whitesboro Police Department who died in 2018, were also at the event at the fireman's field. Crossley's mother, Linda, noted The Kevin “Bing” Crossley Memorial Foundation, founded by Kevin's family friends, was going to give a contributing to Running 4 Heroes.

Anne Chapman McLoud, who was married to Stephen McLoud for over 35 years, said she was glad so many people were at the event.

Chad Cartledge, president and CEO of Running 4 Heroes, said it was "pretty cool to see a kid give back so much, especially to a group of individuals that really need to know that they're supported."

Zechariah, who wants to be a commercial pilot, said he loves being able to meet the loved ones of fallen first responders.

The Auburn Police Department said a man was charged with a felony drug crime after being caught with powder cocaine, crack cocaine and fentanyl.

A Cayuga County town may have changed its mind about "opting out" of parts of New York state's marijuana law.

After 18 years in business, Cate and Sally has closed their Skaneateles women's clothing boutique of the same name.

AUBURN — People on both sides of Genesee Street in Auburn greeted the city's first holiday parade in two years with cheers.

With COVID-19 cases surging and the holiday season about to hit full speed, Cayuga County health officials are concerned about the direction t…

Zechariah Cartledge, 12, is presented with a quilt by Debbie Henderson, right, and Anne Chapman McLoud at a fundraiser at the Weedsport Fireman's Field Saturday.

People spend time together at a fundraiser at the Weedsport Fireman's Field Saturday.