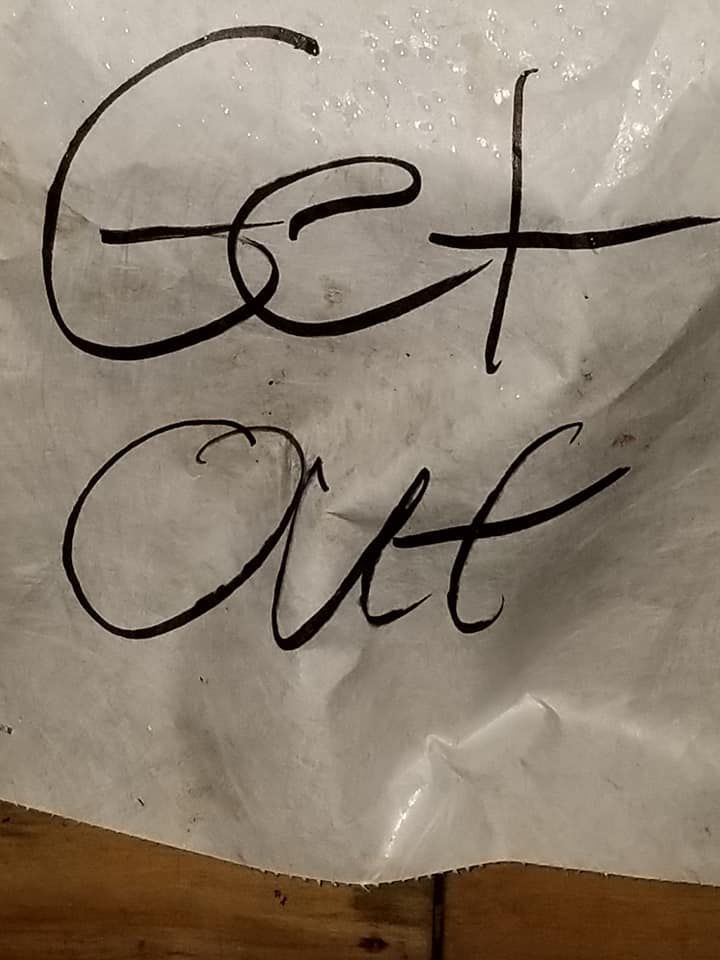 A note found at a home on North Road in Owasco in November. 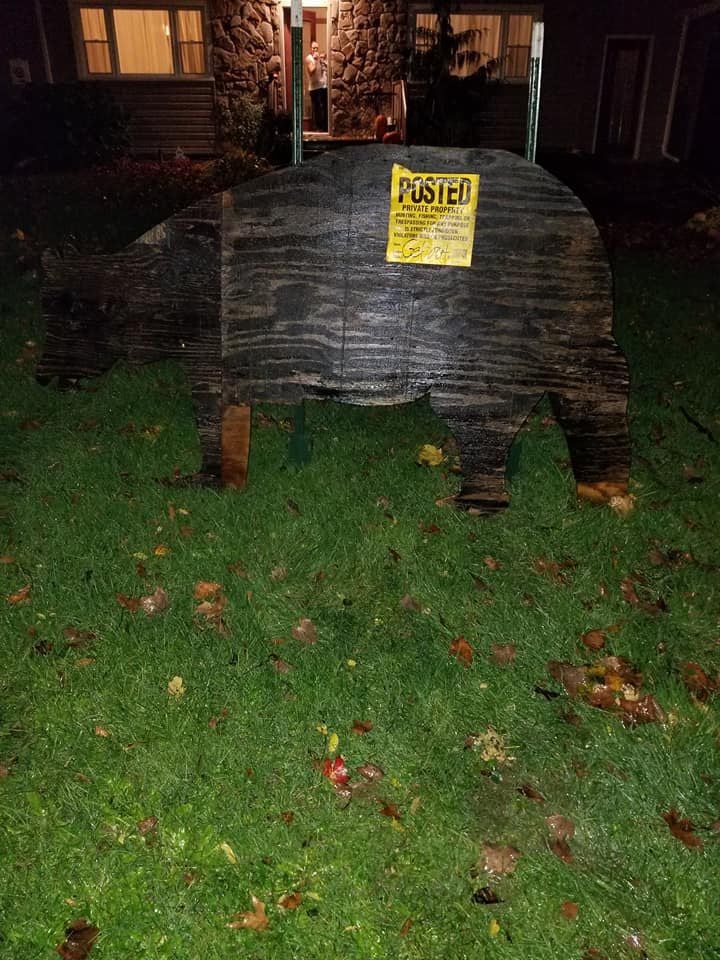 A cutout of a black bear was placed on the lawn of a home on North Road in Owasco with a sign that read, "Get out."

AUBURN — An Owasco man will spend the next six months in jail for menacing a family in what authorities deemed a "landlord-tenant dispute" last fall.

At around 10:50 p.m. Nov. 5, the Cayuga County Sheriff's Office was dispatched to a home on North Road following reports of shots fired at the residence. At the time, the sheriff's office said two males had parked a red tractor in a family's driveway, placed a large cutout of a black bear with a sign that said "Get Out" in the front yard and fired a shotgun before fleeing the scene.

Deputies later arrested 51-year-old Eric Simmons, of 4286 Baptist Corners Road, for harassing the family over a "landlord-tenant dispute." The sheriff's office said Simmons was a friend of the landlord, who had a rent disagreement with the family. Simmons' teenage son was with him at the time.

Simmons was charged with seven counts of third-degree criminal possession of a weapon, a class D felony, as well as second-degree menacing with a weapon, second-degree obstructing governmental administration and endangering the welfare of a child, all misdemeanors.

However, several local community leaders believed Simmons should also have been charged with a hate crime because one of the victims was black.

Following the incident, representatives from the Harriet Tubman Center for Justice and Peace, Harriet Tubman Boosters and Celebrate! Diverse Auburn said they were "deeply concerned" and asked the sheriff's office to further investigate the possibility that a hate crime had been committed. In response, Cayuga County Sheriff David Gould asked the New York State Police hate crimes task force to review the case, and in late January, the task force reported there was no evidence that a racially motivated hate crime had taken place.

In May, Simmons pleaded guilty to two counts of third-degree criminal possession of a weapon as well as the menacing, obstructing and endangering charges. In exchange for his pleas, he was promised no worse than one to three years in prison.

"Although there was nothing to support a hate crime ... clearly there's hate here," he said. "Nobody would go to someone's home at night with a shotgun and a sign that says 'Get Out' if there wasn't hate involved."

The district attorney also highlighted Simmons' struggle with alcohol abuse, which led to a handful of drunk driving related offenses back in the 1980s. Budelmann said his office recommended prison, both to address Simmons' addiction and to send a message to the community.

Meanwhile, Simmons' defense attorney, Michael Spano, said there was "no contention" that alcohol had negatively affected his client. He said Simmons was highly intoxicated the night he went to the North Road residence, where he took things "way too far."

"This was one bad night fueled by alcohol," Spano said.

Simmons apologized, first to the family he harassed and then to his own. He said he was sincerely sorry for his actions.

In the end, Fandrich said he agreed with the district attorney that Simmons has "had a problem with alcohol for a very long time." He also stressed that Simmons had not been a good role model for his children, especially his 14-year-old son who he brought with him the night of the crime.

"I think incarceration is appropriate, but I don't think you should go to prison," he said.

Simmons was ultimately sentenced to six months in Cayuga County Jail and five years probation. Fandrich said Simmons would also have to complete substance abuse treatment if the probation department recommended it, and issued an order of protection for the family Simmons had targeted through 2026.

Father following son to prison for burglary. A3

A note found at a home on North Road in Owasco in November.

A cutout of a black bear was placed on the lawn of a home on North Road in Owasco with a sign that read, "Get out." 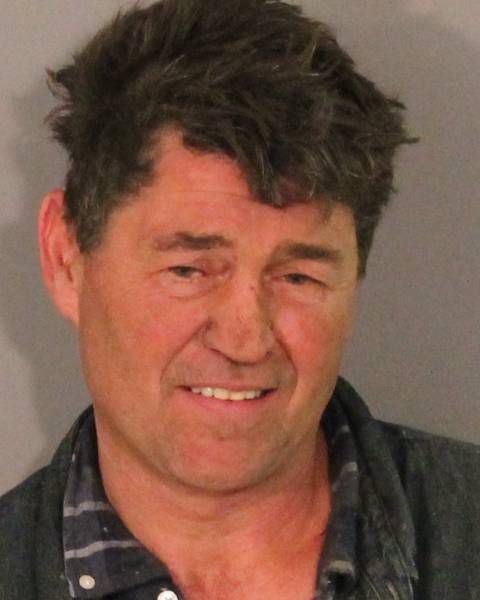