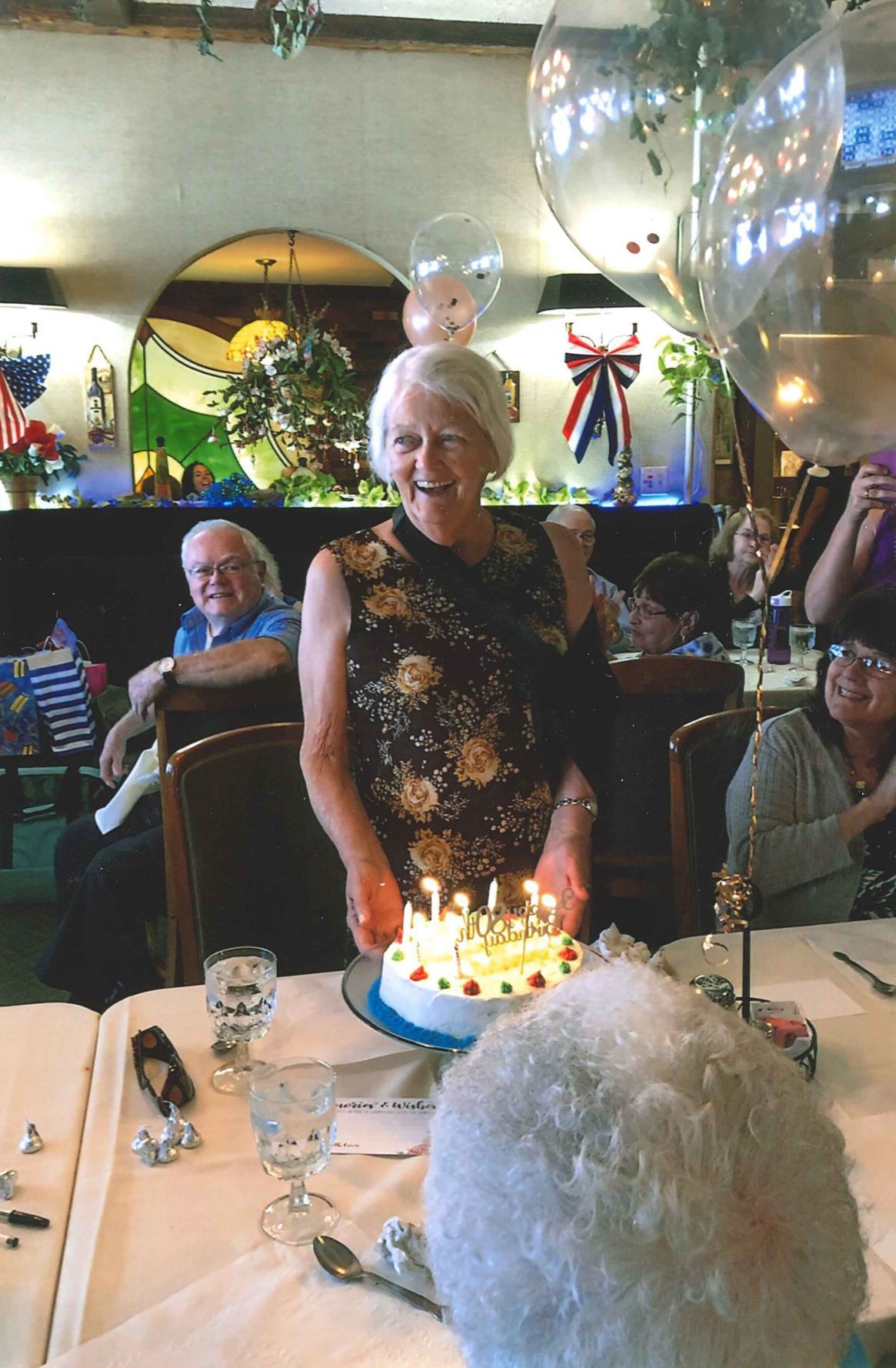 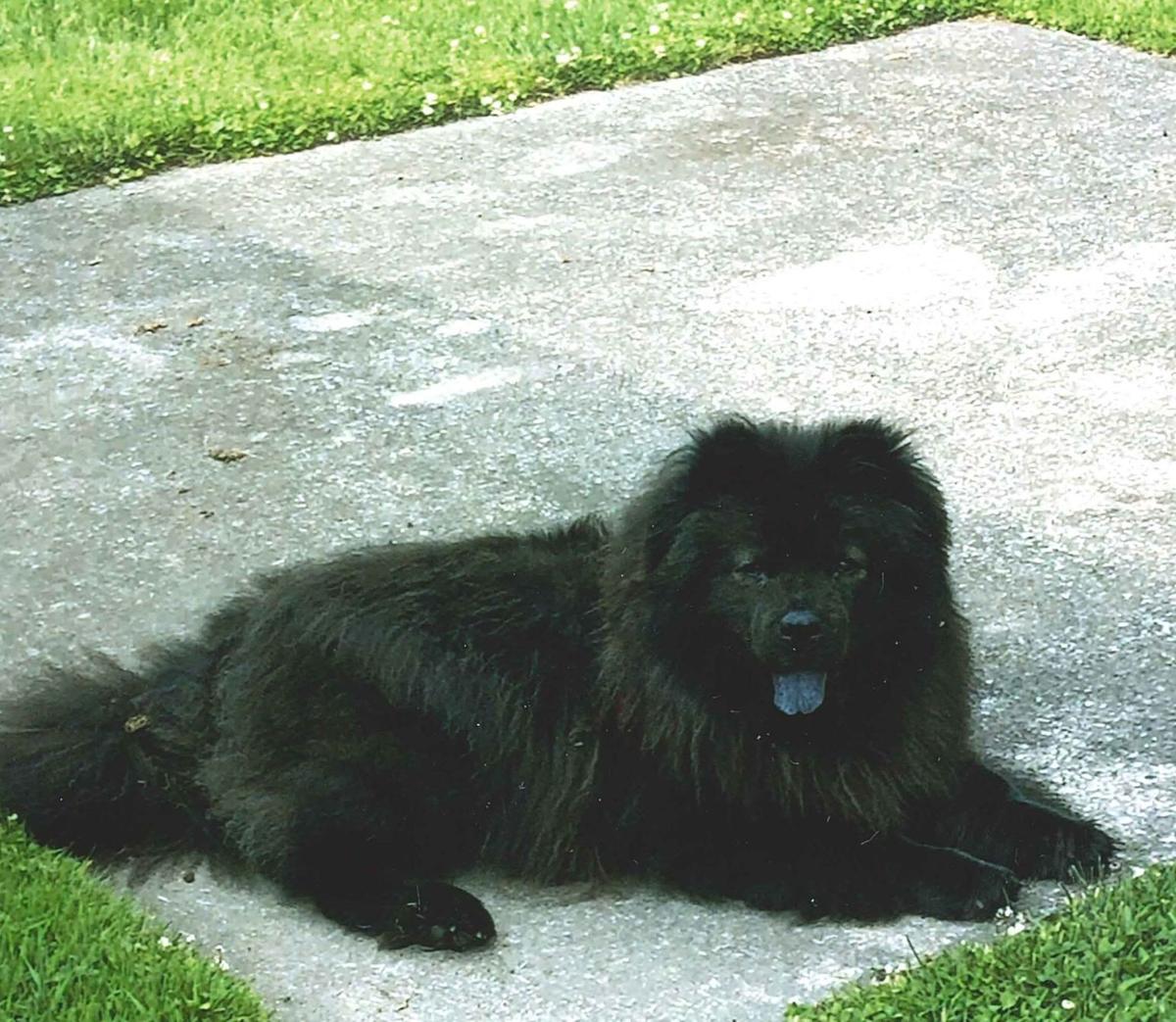 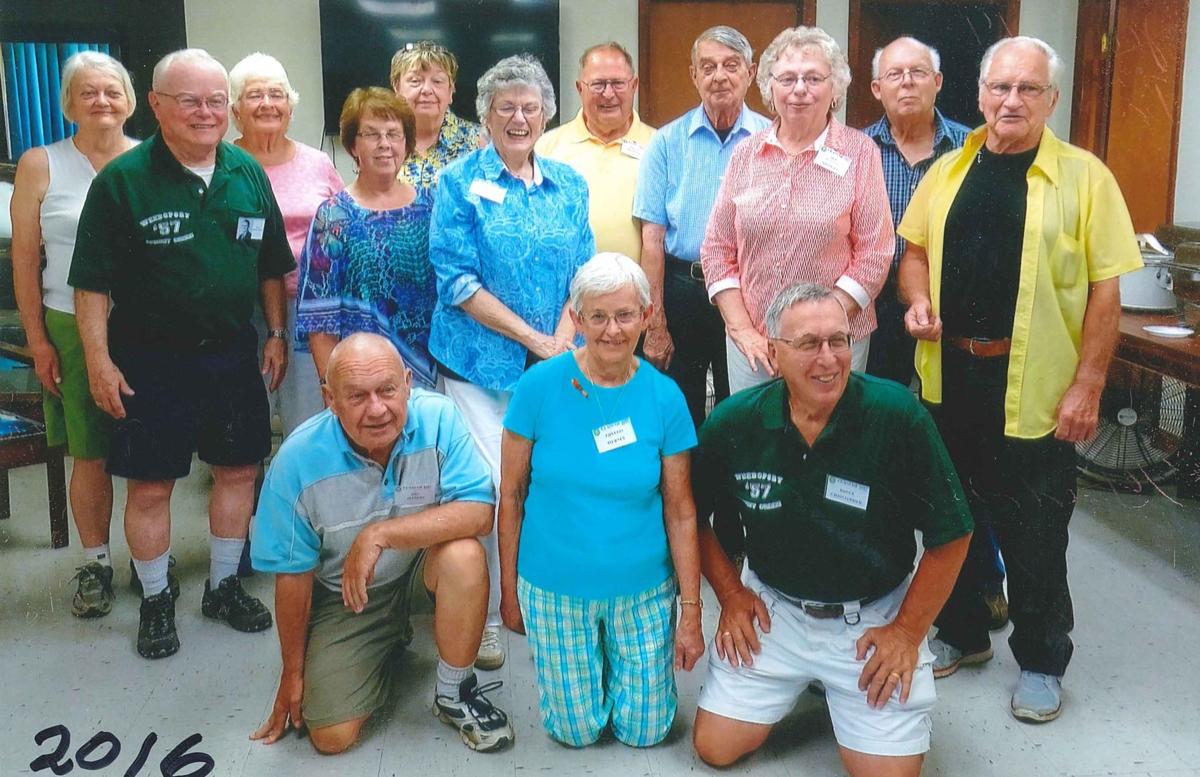 I often see a lady in our neighborhood walking her dog each day, regardless of the weather. Even in the rain, the dog wears a raincoat! She has a beautiful black chow chow dog named Xiao Ning, and the two of them have been walking daily for many years. She told me they walk about 3 miles a day, and also downtown for parades, and to the high school for special events. So I asked this nice neighbor if she would like to share a little about herself for an article, and she agreed. Her name is Alicia Procino and here is her story.

Alicia’s friends and family recently helped her celebrate her 80th birthday on July 4, as shown in a photo attached with today's feature.

Her career started as a young nurse in New York City, living in a nurses’ residence on Roosevelt Island in the middle of the East River. She said it brought back fond memories for her when Dr. Jared Seltzer, originally an Auburnian and a former student, sent her a video of the tram crossing the 59th Street bridge with people taking pictures of the island.

The NYC hospital buses took the nurses to Metropolitan Hospital in the city. That particular hospital, a learning institution, was quite challenging because it had the highest birthrate in the United States and was in the heart of the drug abuse territory, as well. Being from rural upstate, she was shocked when assigned to a home care unit and finding the only source of heat for an elderly couple was a kerosene stove, fumes included, in a fifth floor apartment. The couple was homebound with cardiac problems so could not manage the five floor stairways. Old buildings have no elevators.

She learned quickly that both poor and famous people have medical problems. Billie Holiday was a patient, struggling with addiction problems and there were patients from the famous Duchin family, who bought the Governor Harriman estate, with serious alcohol problems.

When she eventually returned to Auburn to raise a family, she took an interest in the school system. At that time, Auburn was looking for an acceptable location for the new high school. As New York state changed the rules for surrounding space, three consecutive bond issues failed before finally a new location was found — the present site on Lake Avenue. Although it was on the edge of the city, it was central to an expanded school district which now included areas in both Fleming and Owasco. Having extended her nursing interests to education, she spent an additional two years obtaining her certification in secondary education and masters in both nursing and education. One summer was spent in field work for a drug counseling program at Auburn prison.

Mrs. Procino became a crisis counselor in the county drug program, at Auburn High School, and eventually a teacher for 30 years. She and the other retired health teacher from AHS compared notes and both have taught more than 17,000 students. If you grew up in Auburn, chances are that you knew one of them.

She said she is honored to see former students in new positions such as Chris Mahar, or now retired Brandi Quigley, Joel Pinker, and others receiving awards. For example, just recently Lt. Steve Parker, Auburn Fire Department, received a 25-year honor, or others such as City Councilors Terry Cuddy and Jimmy Gianettino, or a fellow teacher Councilwoman Dia Carabjal.

Additionally, Alicia mentioned that long ago, before the internet and extensive TV news coverage, it was difficult to obtain accurate information on election issues. The League of Women Voters was an organization that researched issues but did not support specific candidates. There was a chapter here in Auburn. Sadly, we again are finding it difficult to find accurate information.

Mrs. Procino still goes to city council meetings, although aging eyes limit driving after dark, restricting some activities. Her extensive volunteer commitments include RSVP, the Calvary Food Pantry and SS. Peter & John’s soup kitchen, which exposes her to many new people and interests in her retirement. RSVP volunteers annually provide hats, scarves and mittens to each child at Genesee Elementary School, and some to other schools as well. Calvary Food Pantry purchases food from CNY Food Bank, which it distributes free to those in need. Their monies come from local churches, individuals and a few area businesses. Annually it amounts to $291,000. SS. Peter & John’s soup kitchen served over 5,000 free meals last year, with over 2,000 being to senior citizens. It provides social contact with others for many who live alone, and also provides a balanced, hot meal.

She has a particular interest in chow chows, known for their unique personality. She says it’s a good fit and she still occasionally takes fosters from CNY Chow Rescue, in addition to her own, Xiao Ning.

Many thanks to Mrs. Alicia Procino for being a great Legend of Auburn!

Around Auburn for Sunday, Oct. 20

Today’s thought: Doesn’t that hot shower on your back feel sooo good?

Just a reminder to all you folks out there. I would be happy to showcase your faded photos, and/or share a story on you, your family, your friend or any other local legend you know! Send your story (800 words or less) and a few photos to ormie5king@gmail.com, or mail them to me at 5 Wilbur Ave. in Auburn. And I’m always happy to add in your birthday, anniversary and get well announcements. (It's best if you can get them to me at least a week prior to the occasion.) Thanks!

Today’s article and photos, which is about this year’s Auburn High School Athletic Hall of Fame inductees, comes to us from Meghan Bishop and …