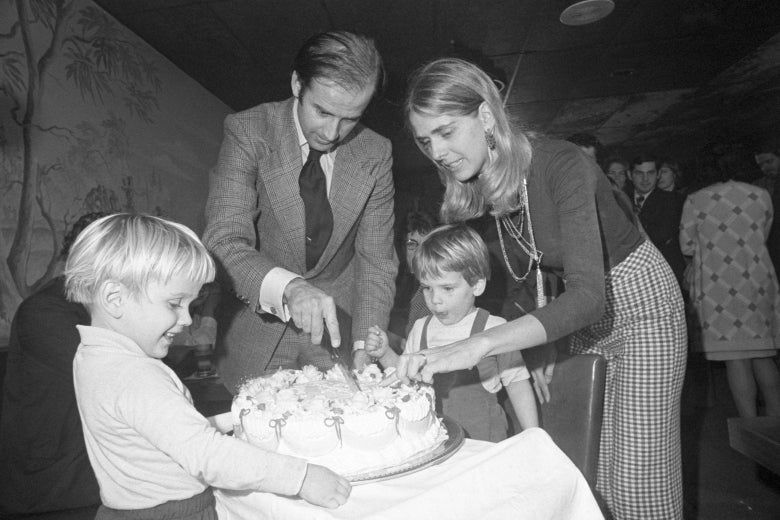 Delaware U.S. Sen.-elect Joseph Biden and wife, Neilia, cut his 30th birthday cake at a party in Wilmington, Delaware, on Nov. 20, 1972. His son Hunter waits for the first piece. 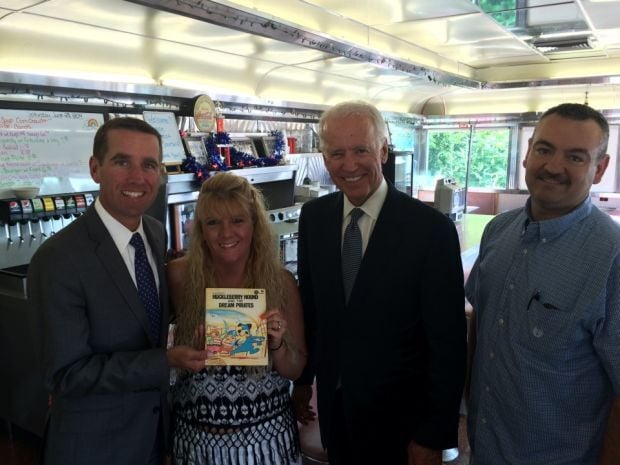 Joe Biden visits Hunter Dinerant in 2014 during a visit to Auburn for his niece’s wedding. Shown here is Delaware Attorney General Beau Biden, Vice President Joe Biden, and Rachel and Bill Juhl, co-owners of the diner. Rachel gave Beau Biden a book, “Huckleberry Hound and the Dream Pirates,” that a customer dropped off. Beau Biden owned the book as a child. 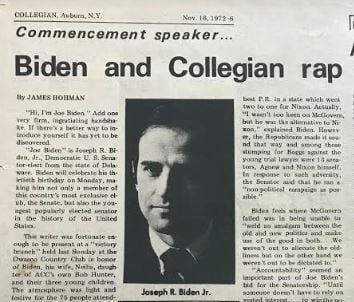 A 1972 article in the Collegian, the Auburn Community College newspaper, on Joe Biden, who would be the college's commencement speaker the following spring. 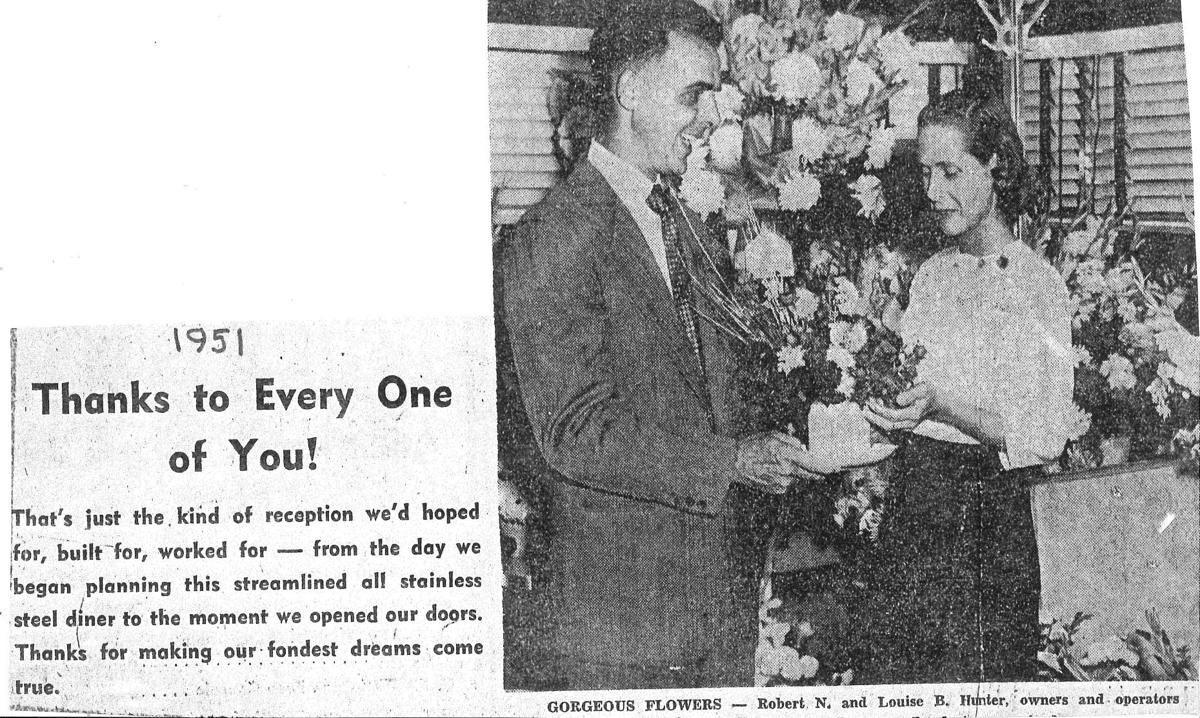 Bob and Louise Hunter, Neilia Hunter Biden's parents, at the grand opening of their stainless steel diner in Auburn in 1951.

Today’s story is really special one and comes to us from Auburn native Jim Hohman. Thanks, Jim, for sharing such a great story, and thanks to Joe Biden and family for being truly great Legends of Auburn!

And that’s how the conversation between a kid U.S. senator-elect and an even younger community college newspaper editor got under way some 48 years ago.

Joseph R. Biden Jr., raised in the hardscrabble of Scranton, Pennsylvania, had just become the youngest-ever popularly elected member-to-be of the U.S. Senate. He was in Auburn to celebrate with friends and family less than a week after his stunning victory to represent the residents of Delaware in Washington.

Still ineligible at 29 to take his seat in the U.S. Capitol (he would have to wait a couple of weeks until turning 30, the Senate’s minimum age requirement), Biden was there for a victory brunch with his wife, Auburn native Neilia Hunter Biden, her parents, Bob and Louise Hunter, owners of legendary Hunter’s Dinerant, the Bidens’ three little ones and another 65 or so friends and supporters. Among the guests was my mother, Patricia Hohman, who used this unique opportunity to bolster my journalistic ambitions.

The scene of the brunch was Owasco Country Club on a cold and gray Sunday afternoon, Nov. 12, 1972. But the mood inside was warm and festive. After all, the remarkable — the politically miraculous — had occurred.

Biden, a first-term county councilman from Wilmington, Delaware, and barely out of Syracuse University law school, had captured the seat held by a powerful GOP senator and former Delaware governor. Biden’s long-shot campaign for the post had generated little enthusiasm among the Democratic establishment of Delaware, according to press reports at the time. But, backed by an enthusiastic army of young volunteers, he pulled it off. By a 3,000-vote margin, out of nearly 230,000 voting, Biden had displaced J. Caleb Boggs, who hadn’t lost an election in 26 years. Biden would eventually eclipse that record with his own: undefeated in eight elections over a 44-year span.

(Perhaps most remarkable about Biden’s surprise victory was the year, 1972, in which he knocked out a longtime Republican senator considered a shoo-in for reelection. Generally, it was a bad year for Democrats. The party’s presidential candidate, Sen. George McGovern of South Dakota, was clobbered, managing to win just one state, Massachusetts, and Washington, D.C. Incumbent Republican President Richard Nixon, in a landslide, collected 520 of a total 537 votes cast in the Electoral College.)

Bob and Louise Hunter, who opened their famous Genesee Street eatery in 1951, were close friends of my parents, John and Pat Hohman, longtime owners of another well-known downtown Auburn business, Hohman’s Catholic Shop. Bob Hunter, busy Auburn dentist Gerry Lesch, my dad and a few other close friends spent many Friday evenings over the years playing poker, rotating the games among their homes. I could never tell if Mr. Hunter had had a bad night at the table. His smile never faded.

When my father died in 1970, the Hunters remained close to my mother, which she deeply appreciated. She was among the 75 attendees invited to celebrate with the family Biden’s out-of-nowhere victory. Now, you would have to have known Pat Hohman to appreciate her humor, kindness, generosity — and direct approach to most situations.

Knowing I was editor-in-chief of Auburn Community College’s student newspaper, The Collegian, and figuring maybe an interview with the young senator-in-waiting would make good copy, my mother took the direct approach and asked Biden if he would sit for an interview with her son, the college editor.

As my mother later told the tale, Biden didn’t hesitate a moment in agreeing to the request. So, my home phone rang, and I was summoned to the clubhouse on the lake for what turned out to be a lengthy conversation in a quiet corner resulting in a pretty fair read, as one of my editors used to say.

Nearly a half-century after that interview with the newly minted senator-elect, his message of accountability and transparency appears to have remained constant. He told me he thought the “youth vote” (read: Baby Boomers) was seeking more candor from their politicians. But he also emphasized personal responsibility. “I’m a strong believer in John F. Kennedy’s concept of ‘Ask not what your country can do for you, ask what you can do for your country.’”

Barely a month after that victory celebration in Auburn, a soul-crushing tragedy hit Biden, the deaths of his wife and baby daughter in a horrific traffic accident in Wilmington. The couple’s two little boys, Beau and Hunter, were seriously injured but survived the wreck. The grief in Auburn was palpable. The Hunters were much loved and for them to lose their daughter and granddaughter so terribly defied comprehension.

Before leaving the brunch, Biden had accepted an invitation from ACC President Albert Skinner to give the commencement address the following May. Honestly, after suffering such a horrible loss, Biden wasn’t really expected to make it back to the college that spring. At least that was a common belief on campus at the time. And who would blame him if he took a pass?

He’s a standup guy, however, and fulfilled his promises not only to serve the people of Delaware when in his grief he could have turned his back on public service, but to the young graduates of ACC, as well.

Biden never left Auburn behind. At the ACC graduation ceremony in May 1973, he arranged with the college to introduce the Neilia Hunter Biden English Scholarships, awarded to two graduates pursuing four-year degrees in journalism and English literature. The twin scholarships have been awarded annually for decades. I also happen to know that Ormie King was present at that same CCC graduation ceremony in 1973. He himself was a young county legislator at the time, and he was asked to do the honors of escorting Joe Biden down the aisle during the ceremony, then sitting with him throughout to keep him company. Ormie said it was an honor he will never forget.

Over the years, Biden and his sons, Beau, the former Delaware attorney general who died at 46 in 2015, and Hunter, a favorite Republican target in recent years, returned to Auburn periodically to visit grandparents Bob and Louise and other family members, even making a surprise appearance in 2014 at the wedding of a niece.

Should Biden become No. 46, it seems a sure bet we can count on another presidential visit to “History’s Hometown.”

Auburn native Jim Hohman was editor-in-chief of The Collegian and graduated from ACC in 1973. He went on to earn a bachelor’s degree at the University of Missouri School of Journalism with assistance from the Neilia Hunter Biden Scholarship. He’s an avid fan of Ormie King’s reminiscences, reads The Citizen’s obits to keep track of old friends and writes a blog of political satire when he has something to say: www.newsmakerblog.com. Jim is retired and lives with wife, Marian Hale, in — wait for it — Delaware.

Happy 100th birthday on Aug. 29th to Mary Gavras Borkoski, an RSVP volunteer since 1994 with Meals on Wheels, Calvary Food Pantry and most recently the St. Peter and John Soup Kitchen!

Joe Biden, former vice president and now president-elect of the United States, has numerous ties to the Auburn area and central New York. He v…

Joe Biden, sworn in Jan. 20 as the 46th president of the United States, has numerous ties to the Auburn area and central New York. He visited …

As Joe Biden takes office as the 46th president of the United States, many central New Yorkers will be thinking of the teacher they once called "Miss Hunter."

Delaware U.S. Sen.-elect Joseph Biden and wife, Neilia, cut his 30th birthday cake at a party in Wilmington, Delaware, on Nov. 20, 1972. His son Hunter waits for the first piece.

Joe Biden visits Hunter Dinerant in 2014 during a visit to Auburn for his niece’s wedding. Shown here is Delaware Attorney General Beau Biden, Vice President Joe Biden, and Rachel and Bill Juhl, co-owners of the diner. Rachel gave Beau Biden a book, “Huckleberry Hound and the Dream Pirates,” that a customer dropped off. Beau Biden owned the book as a child.

A 1972 article in the Collegian, the Auburn Community College newspaper, on Joe Biden, who would be the college's commencement speaker the following spring.

Bob and Louise Hunter, Neilia Hunter Biden's parents, at the grand opening of their stainless steel diner in Auburn in 1951.