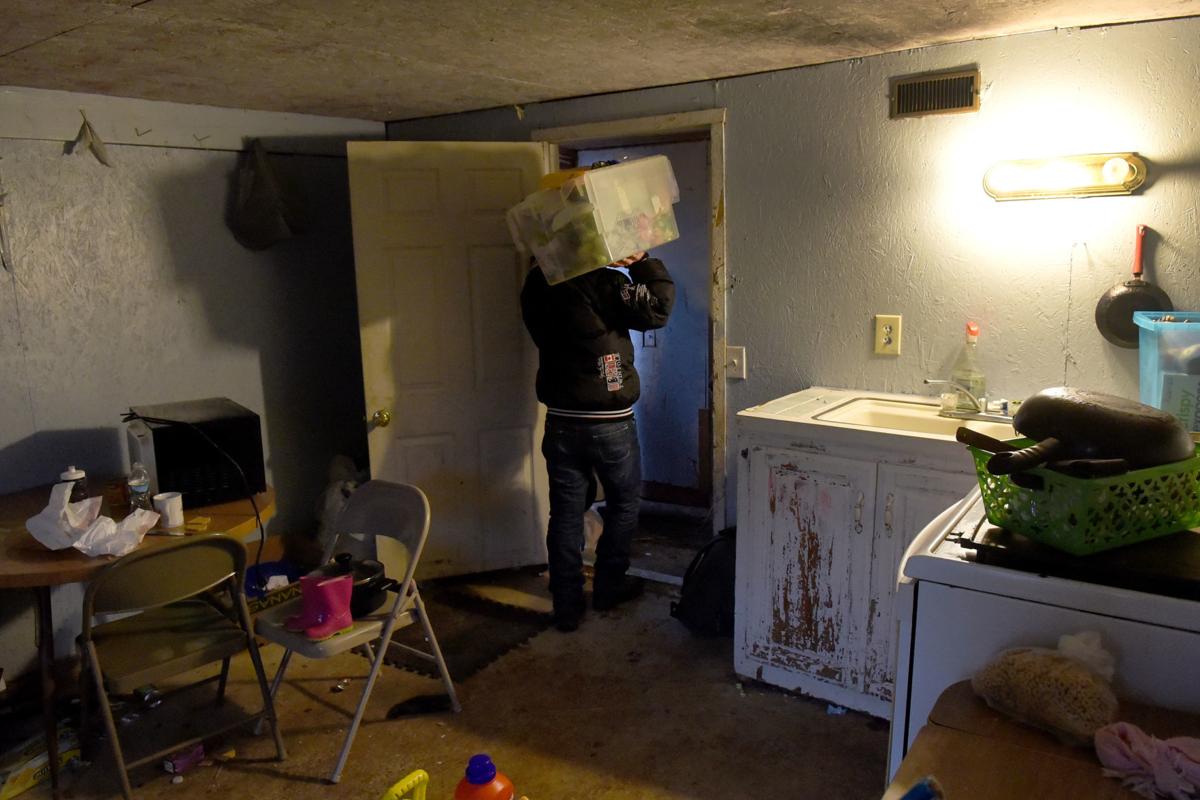 Farmworkers lived in this trailer and structure on Melrose Farm in Owasco. 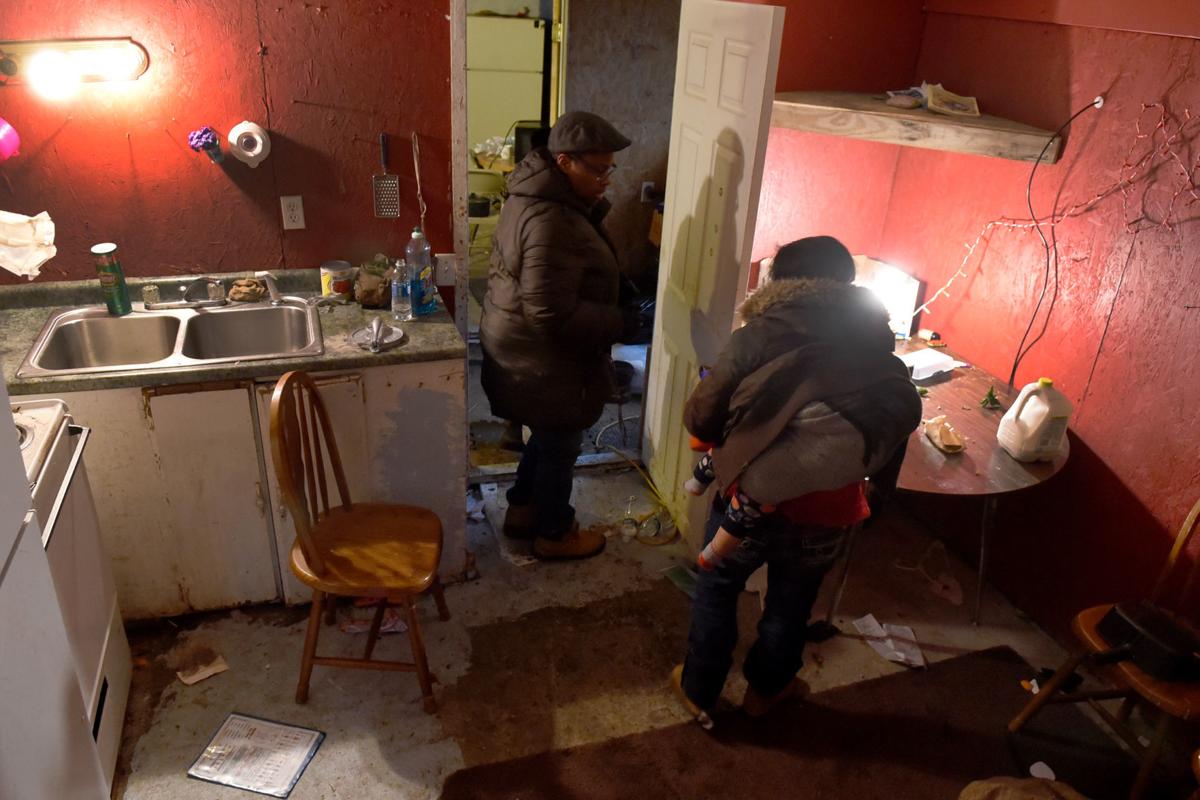 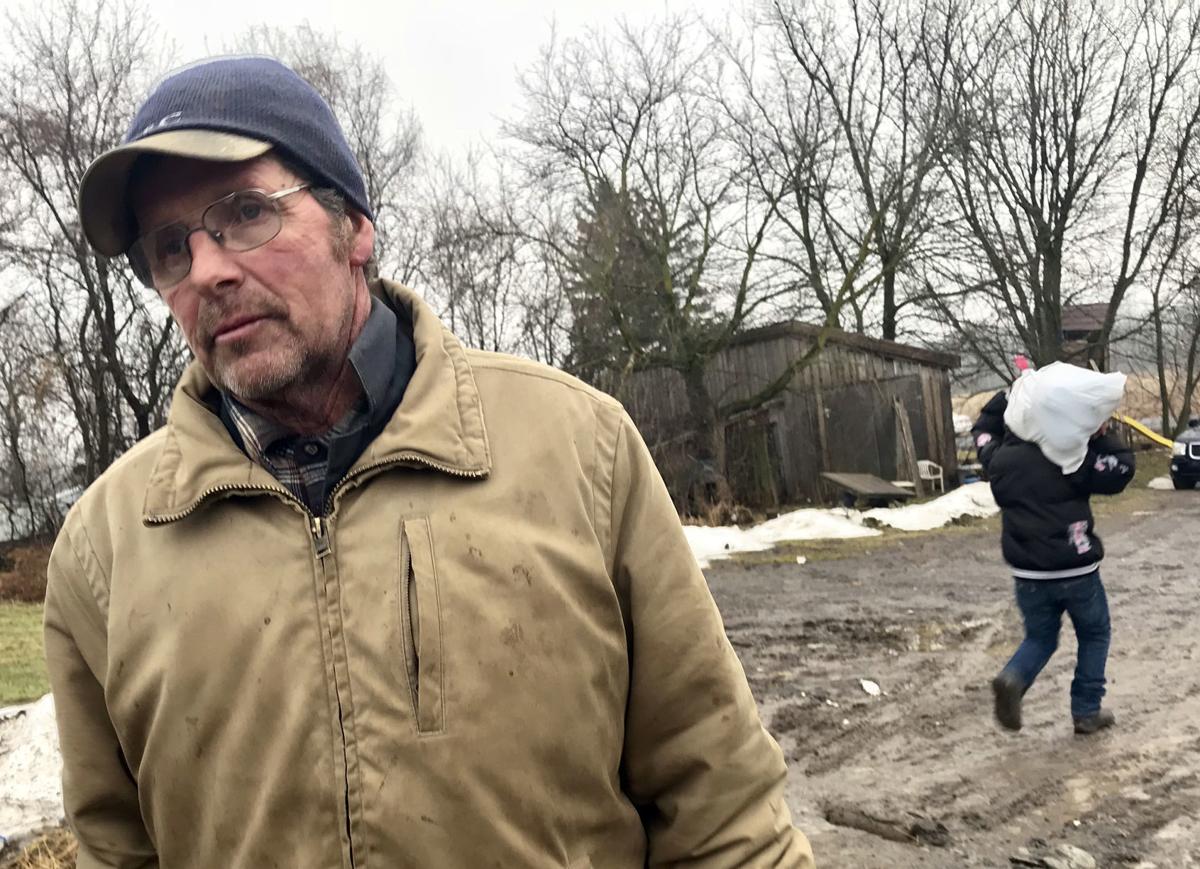 Farmer Joe Tidd looks on as workers leave with their belongings Friday. 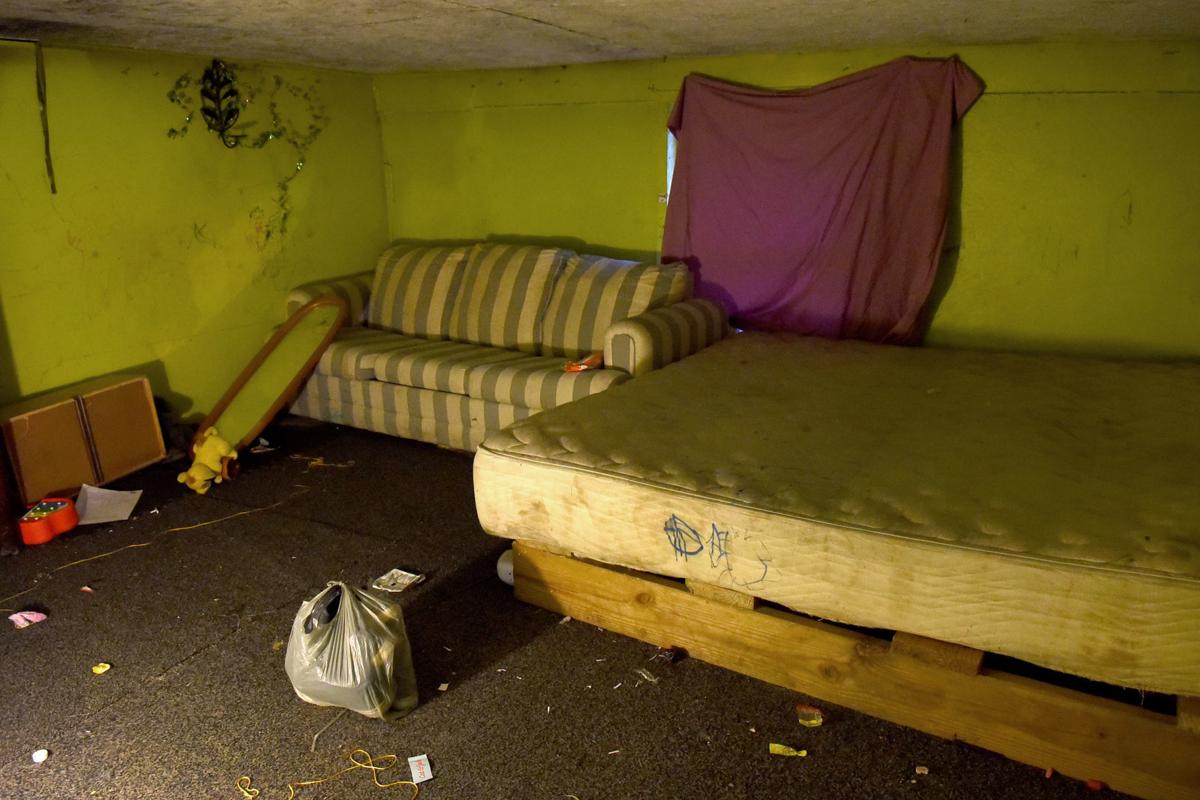 A bedroom on the first floor of the farmworkers living quarters on Melrose Farm in Owasco. 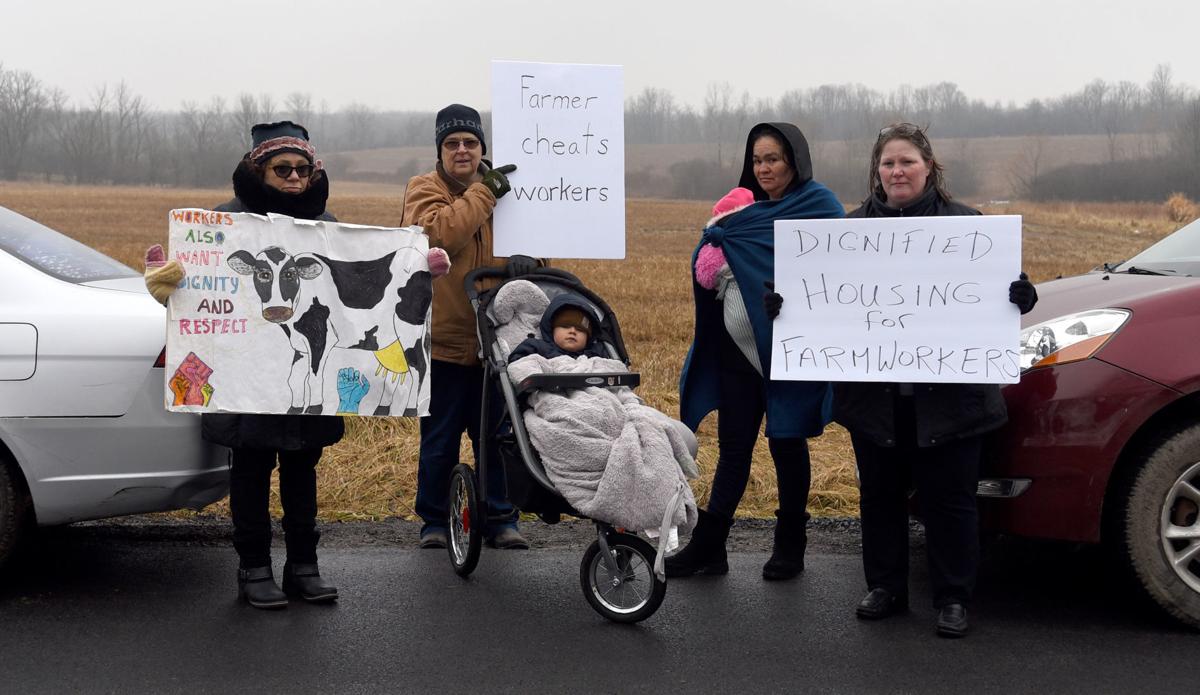 Protesters gather in front of Melrose Farm in Owasco.

Four adults and five children have been living in squalor on a dairy farm in Owasco since December, and Catalfano helped them pack up their belongings Friday and leave.

With temperatures dropping and a light sprinkle falling, young women and children carried out hampers and trash bags filled with food and clothes through the mud and to a van. A few baby calves looked out from their hutches at a nearby fenced-in area, while Melrose Farm owner Joe Tidd and his wife looked on, shaking their heads in disbelief.

The house for migrant workers on Melrose Road looks like a barn structure turned into living quarters. The bedroom ceilings are so low that most people can't stand up straight, and stained mattresses without bedding lay plopped on a dirty floor. The upstairs bedroom is a converted attic with sloping ceilings to an apex. Walls, ceilings and floors are made mostly from particle board, and mold and dirt cake the floors, carpet and cabinets. A sickly sweet manure and urine smell permeates the rooms, which have sheets covering the windows.

Tidd was issued a cease and desist order by the town of Owasco for housing workers, and the Workers Center of Central New York is helping the families file wage complaints with the state Department of Labor. The center, along with volunteers like Catalfano and others from local churches, assisted the families in moving out Friday.

They will be housed in a hotel for the short-term, but volunteers have found an apartment for the nine people, which they will move into soon.

Owasco Town Supervisor Ed Wagner said the Cayuga County Health Department, the state Department of Environmental Conservation, town code enforcement and other agencies are all investigating the farm. Wagner has seen photos of the migrant workers' living conditions and said they were horrible.

The town of Owasco has issued a cease-and-desist order to an Owasco farm regarding conditions inside a building where workers live.

"I think it will put an emphasis on other farms who are hiring this type of employment that they need to treat people fairly, and I wouldn't let my dog live in a situation like that," he said.

Meanwhile two workers are still living in a trailer adjacent to the house that the families were living in, said Rebecca Fuentes, lead organizer for the workers center. She said the trailer does not have hot water or septic.

Wagner said the cease and desist orders were filed around Feb. 10, and Tidd has 30 days to vacate the structures. Every day there are occupants, however, Tidd could be fined or receive jail time, Wagner added.

"He needs to close this and provide dignified housing for employees," Fuentes said. "Even if they don't charge rent, it's their responsibility to provide good housing."

Lady Mazariegos, one of the workers, spoke with The Citizen with Fuentes translating from Spanish to English. The 23-year-old said Tidd had not paid her all of her wages over the last couple of weeks. When she and her family arrived in December, she said the house was in terrible condition with lots of cockroaches, mice and rats running around, and a bad smell in the water.

The family was concerned about electrical wiring, too. It was not underground, and many light fixtures and sockets were exposed throughout the house. With young children living in the home, Fuentes said it was a very dangerous situation.

"Right now it's a little bit better, but when we came in it took about two days and two nights to clean it," Mazariegos said.

Tidd did not charge rent, but Mazariegos said if they had earned more, she would have been willing to pay.

Fuentes said there were other incidents with other workers prior, who had been fired at the farm for complaining about living conditions.

"Many times when they're working at the farm, they're very concerned about retaliation so they decide to just do it later or when they leave, put in complaints," she said. "In general it's very difficult for them, because they depend on housing for their jobs."

Marty Fefer, of Fleming, stood outside the farm to protest the conditions. He said he's been bringing food and clothing to workers on the farm for the past eight months.

Fefer said Tidd has also been discharging human waste into his farm's manure pit and spreading it on fields in the watershed, which Wagner confirmed. County Environmental Health Director Eileen O'Connor said her department was aware that the workers' housing did not have a septic system, and it issued a letter to Tidd requesting he install one.

Tidd said it was untrue that he was transferring human waste to his manure pit, and said he did have a septic system. O'Connor said she did not believe the health department had received a response from Tidd as of Friday.

Standing in the mud and watching the families move out Friday, Tidd appeared incredulous at the effort underway. Then he pointed up to the house with a gloved hand at an open window.

"The heat is on," he told a reporter from The Citizen. "That is constant. Constant."

He said there had been issues with this particular group of workers. On Wednesday, he said, he told them they could work until Friday, but they'd have to move out over the weekend. The families say they were told to get out right away.

Tidd said he has had multiple contacts with Owasco Code Enforcement Officer J. Patrick Doyle, and planned to address whatever needs to be addressed inside the house.

"I never ever deny we have to do something to the house," he said. "I get it. However, there are cows here, 350 cows that have to be milked three times a day."

Tidd said Dairy Farmers of America had conducted an animal welfare meeting at the farm earlier in the week and found the cows healthy and clean.

As far as the workers' wages, Tidd said they would come to the farm with the idea that "you got paid X." This group, he said, complained that they weren't getting enough hours. Finally, he said, he'd had enough and told them to leave by the weekend.

"They didn't like what we said, so here we are with all this demonstration," Tidd said.

To donate to the families displaced, contact Westminster Presbyterian Church at (315) 253-3331 or visit 17 William St., Auburn.

The group of people who keep some of Cayuga County's big farms humming include many laborers who eat and sleep right where they work. It is a …

The Citizen's top 10 most-read stories during the month of February.

An Owasco dairy farm previously cited for worker housing conditions is also being investigated by the state for violating clean water regulations.

Farmworkers lived in this trailer and structure on Melrose Farm in Owasco.

Farmer Joe Tidd looks on as workers leave with their belongings Friday.

A bedroom on the first floor of the farmworkers living quarters on Melrose Farm in Owasco.

Protesters gather in front of Melrose Farm in Owasco.