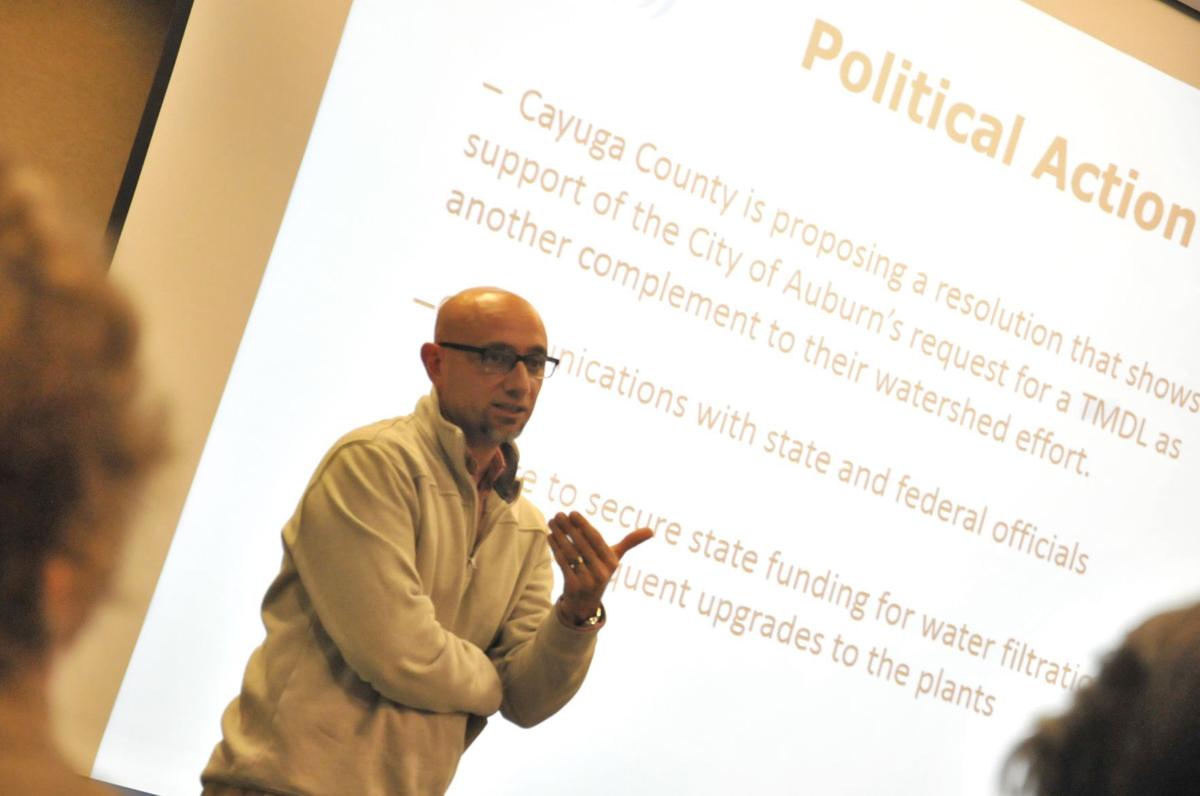 Jimmy Giannettino, Auburn city councilor and member of Save Owasco Now, describes some of the political movement around blue-green algae in Owasco Lake at Monday night's meeting. 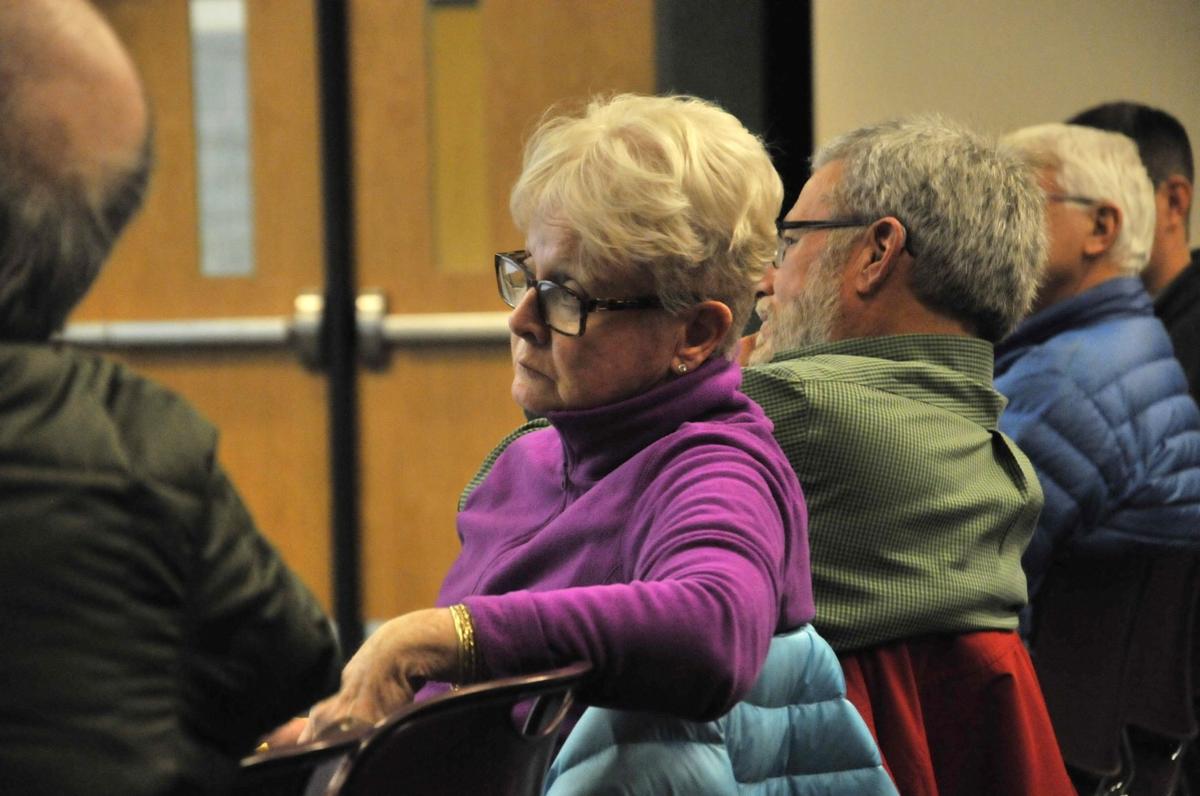 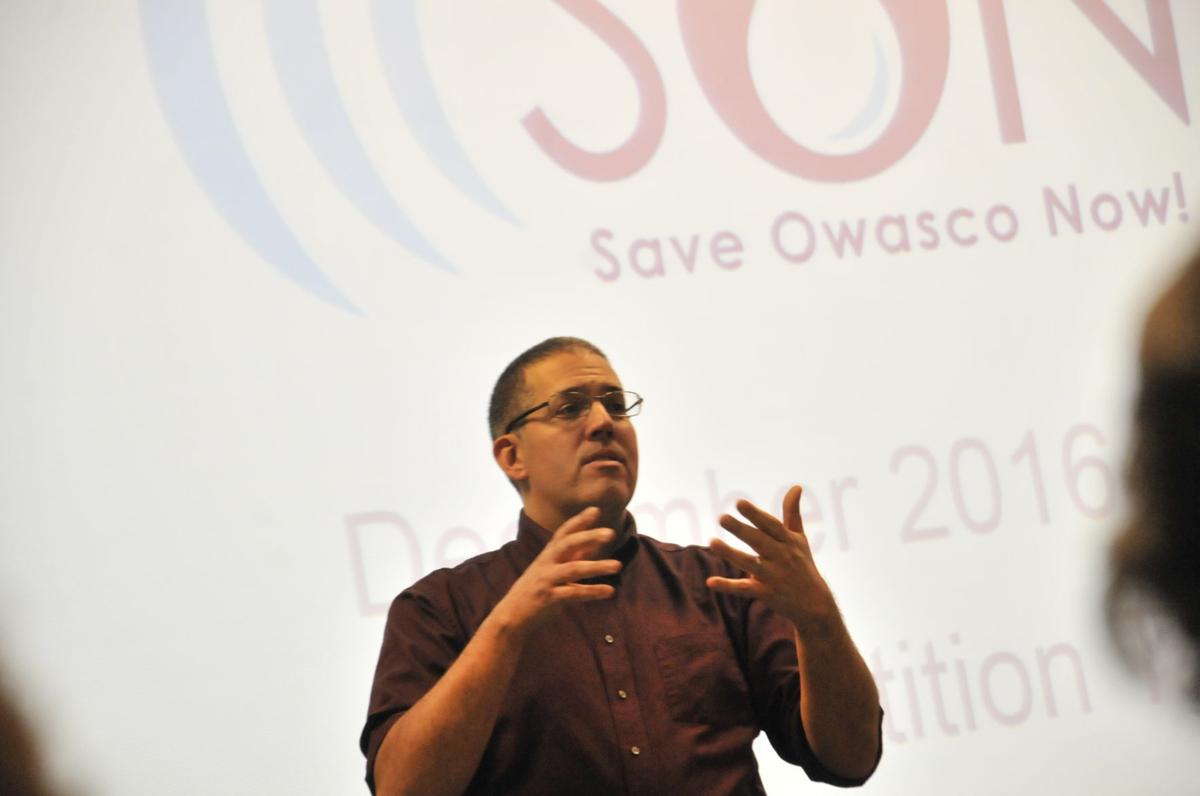 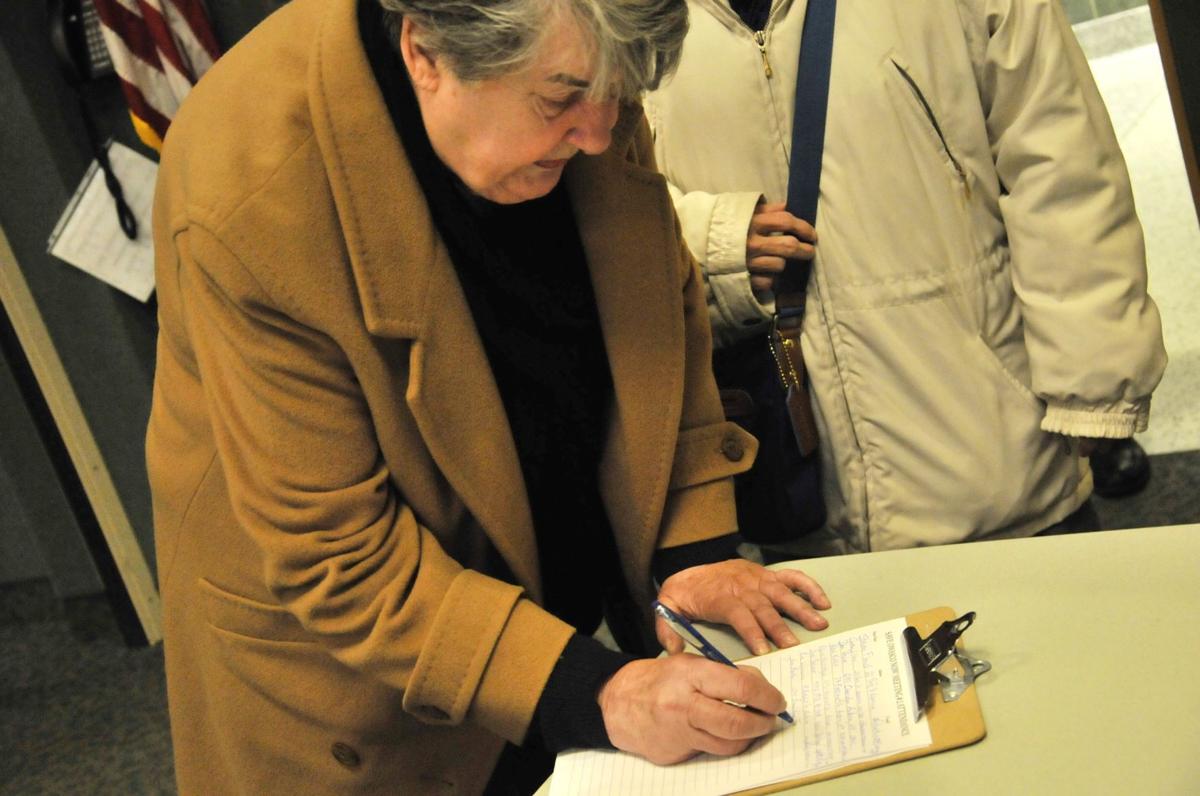 June Lawler, of Auburn, signs in at the second Save Owasco Now meeting Monday night.

AURELIUS — More than 1,000 people signed a petition calling on the state to clean up Owasco Lake and upgrade the city of Auburn and town of Owasco's water treatment facilities.

The petition, created by a new grassroots organization called Save Owasco Now, specifically calls on Gov. Andrew Cuomo to implement a Total Maximum Daily Load (TMDL) on Owasco Lake. A TMDL is the highest amount of a pollutant that a water body can take while still meeting federal clean water regulations.

The call follows this summer's scare when toxins called microcystin from blue-green algae blooms bypassed water treatment facilities into the drinking water of more than 45,000 residents. The city of Auburn and town of Owasco's facilities also serve water to residents in the towns of Aurelius, Fleming, Throop, Mentz, Brutus, Montezuma, Sennett, Springport, and the villages of Port Byron, Weedsport and Cayuga.

The number of petitions collected was right about where Auburn City Councilor Terry Cuddy had hoped, but during the meeting he decided to extend the deadline for collecting signatures to the end of the year. That's because, Cuddy said, he hopes to get more businesses, senior living complexes and local municipalities involved.

Garrett Shepherd, of The Good Shepherds Brewing Company, attended the meeting and told members that he had a petition available to sign at his business because if the water isn't drinkable next year that could have a huge impact.

Cuddy hopes other businesses and hubs will have the group's petition available to sign. Save Owasco Now wants to have them collected and mailed to the governor before the state's legislative session begins at the start of January.

Besides petitions, Auburn City Councilor Jimmy Giannettino updated members on other steps the city is taking. For example, the city has hired an engineer to study the water treatment facility and provide suggestions for upgrades to make it better at removing the blue-green algae toxins. Seth Jensen, director of Municipal Utilities for the city, said he expected those results by the beginning of January.

Giannettino also said that Mayor Michael Quill has heard back from Sen. John DeFrancisco's office affirming that he would support design-build legislation so any proposed upgrades to the treatment plant could be done faster. Cuddy said with the potential of harmful blooms again next summer, the city cannot afford to lose time through the traditional state bidding process when pursuing those upgrades.

As far as movement on the longer-term problem of cleaning up Owasco Lake, Giannettino described that as more challenging. He said the city is working with U.S. Rep. John Katko, U.S. Sens. Chuck Schumer and Kirsten Gillibrands' offices, but Giannettino said the days are gone when representatives had a pot of money they could bring home to their constituents.

"Everything is through a competitive grant process," Giannettino said. "That's one of the hurdles we have to overcome."

He was hopeful that the city would receive some grants or low-interest loans from the Drinking Water State Revolving Fund, a program administered by the Environmental Facilities Corporation and the New York State Department of Health. Giannettino also said he's had conversations with Jessica DeCerce, a representative from Cuomo's office for the central New York region. She said the governor is aware of the problem.

Many concerned citizens still had questions: What about people with private wells on the southern end of the lake? Is it safe to eat fish? Is it safe to eat hunted waterfowl? Do local municipalities who buy water from the city of Auburn and town of Owasco understand that their residents are drinking this, too?

Cynthia Fland, of Moravia, grew up on Owasco Lake in a house on Fire Lane 3. Her family has been there for four generations, and she said blue-green algae was never a problem. She's stunned now, by the strips of green she has seen outside her window.

It's a pain, she said, to not be able to let her three golden retrievers dive into the water. Toxin levels can skyrocket in a concentrated bloom. Dogs and livestock have been known to die within hours if not rinsed off immediately after diving into contaminated water.

But she's afraid, too, for her neighbors and the seasonal homeowners, who may tap directly into the lake, or who don't know about the blue-green algae.

"It's frightening," she said to the group.

To learn more about Save Owasco Now and to sign the group's petition visit facebook.com/saveowasconow/ or email saveowasconow@gmail.com.

Recognizing that we are more effective working together than we would be working alone, the Owasco Watershed Lake Association has forged numer…

Petition to Gov. Andrew Cuomo from Save Owasco Now

A newly-formed community group intent on cleaning up Owasco Lake will meet for a second time on Dec. 12. Called Save Owasco Now, the group wil…

Our view: Owasco Lake advocacy needs to be unified

It was a remarkable scene in December 2010 when three boards of local elected officials — the Cayuga County Legislature, Auburn City Council a…

AURELIUS — Founding members of the Cayuga Anti-Fracking Alliance have come together again, but this time under a new name with a new cause. Ca…

AUBURN — Blue-green algae, also know as cyanobacteria, remains on the brains of local officials as they gear up for next summer.

Owasco Lake's blue-green algae troubles did not make it into the New York State Senate's Water Quality Report released on Jan. 3, but there is…

After collecting 2,080 signatures for a campaign to clean up Owasco Lake, the activist group Save Owasco Now is switching to a letter writing …

AUBURN — Save Owasco Now, an Owasco Lake activist group, thanked Governor Andrew Cuomo for designating $2 million to the town of Owasco and ci…

Jimmy Giannettino, Auburn city councilor and member of Save Owasco Now, describes some of the political movement around blue-green algae in Owasco Lake at Monday night's meeting.

June Lawler, of Auburn, signs in at the second Save Owasco Now meeting Monday night.