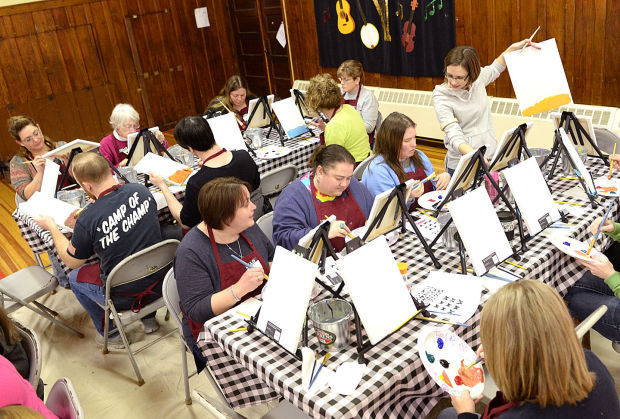 Valerie Piascik hosts a "sip and paint" fundraiser on Sunday to support the fight against epidermolysis bullosa, the disorder Easton Friedel, of Weedsport, has battled. 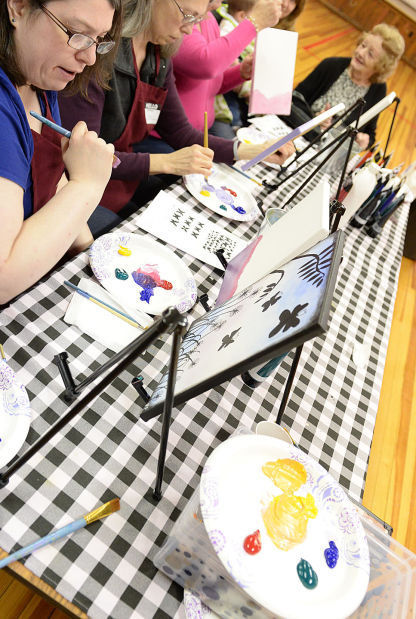 Participants used a sample painting to help create their own piece of art at Sunday's fundraiser.

Jennifer Hogan | Special to The Citizen

WEEDSPORT | An afternoon of socialization and painting on canvas brought people together Sunday to raise  funds for research on a rare, incurable skin disorder.

Paint against EB was a fundraising event hosted by A Little Valentine Design, A Sip and Paint Traveling Studio, at the First Baptist Church on Liberty Street in Weedsport. The event was inspired by the story of Easton Friedel, a 2-year-old Weedsport boy who has battled EB since birth and raised substantial awareness about the condition in the process.

A Little Valentine Design is a new traveling art studio business based in Weedsport owned by Valerie Piascik.

“I have been in business since October,” she said Sunday, “and this is my first fundraiser. I have a son about the same age as Baby Easton and I have always felt close to the family. I don’t know them personally but I wanted to do what I could to help.”

When Piascik spoke with the Friedels and offered to hold the fundraiser to help them with medical expenses, they asked her instead to donate the proceeds to the Dystrophic Epidermolysis Bullosa Research Association of America (DEBRA).

“We chose butterflies for the theme of the paintings because it is said that EB children have skin as fair and fragile as a butterflies wings," Piascik said.

The butterfly is a commonly used symbol associated with EB, a very rare genetic connective tissue disorder that causes the skin to be extremely fragile. Only one in every 20,000 births is affected and there is no cure.

For her business, Piascik travels to the customer and supplies all paints, canvases and instruction on painting She holds a bachelor’s degree in art with a concentration on painting from Wells College. She has worked in the sales field until starting the business in October. She said she hopes to bring the love of painting to those around her.

For additional information about EB and ways you can help support research, visit www.debra.org.

The Auburn Police Department is investigating the death of a city man who was found unconscious on a sidewalk Monday morning.

Another nursing home in Auburn is dealing with a COVID-19 outbreak affecting residents and staff.

National Weather Service: Up to 8 inches of snow in Cayuga County area

The weekend will kick off with a big blast of winter weather in the Cayuga County area.

Valerie Piascik hosts a "sip and paint" fundraiser on Sunday to support the fight against epidermolysis bullosa, the disorder Easton Friedel, of Weedsport, has battled.

Participants used a sample painting to help create their own piece of art at Sunday's fundraiser.