An Owasco man has been charged after police said they found multiple handguns, rifles and high capacity ammunition magazines in his home.

According to the Cayuga County Sheriff's Office, a three-month investigation found that Anthony Ranauro, 32, of 7133 Owasco Road, had been placing orders to an international company for fake identification documents. Separate information later obtained by the Bureau of Alcohol Tobacco and Firearms confirmed that Ranauro had also been ordering weapon parts through the mail.

On May 10, Cayuga County Sheriff's Office detectives, ATF agents and a member of the New York State Police located and interviewed Ranauro. At that time, multiple illegally possessed handguns, rifles and high capacity ammunition magazines were seized from Ranauro's home. Some of the weapons had been built with parts lacking serial numbers, making them nearly impossible to trace, police said.

Ranauro, who is employed as an unarmed guard for a private security company, was charged with two counts of second-degree criminal possession of a weapon, and two counts of third-degree criminal possession of a weapon, all felonies. Detective Lt. Frederick Cornelius said Wednesday that police are still investigating and that Ranauro has not yet been charged for obtaining the fraudulent identification documents.

Anyone with information is asked to contact Detective Sgt. Robert Franklin at (315) 253-1132 or the main sheriff's office line at (315) 253-1222. Anonymous tips may be left at the office's website at cayugasheriff.com. 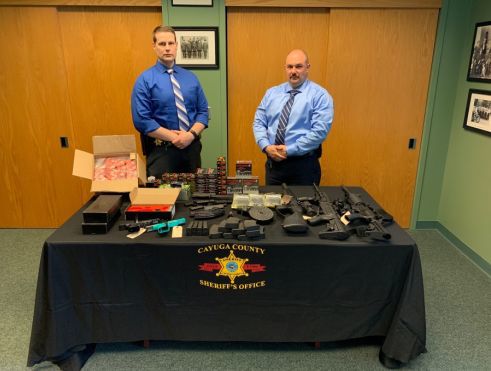