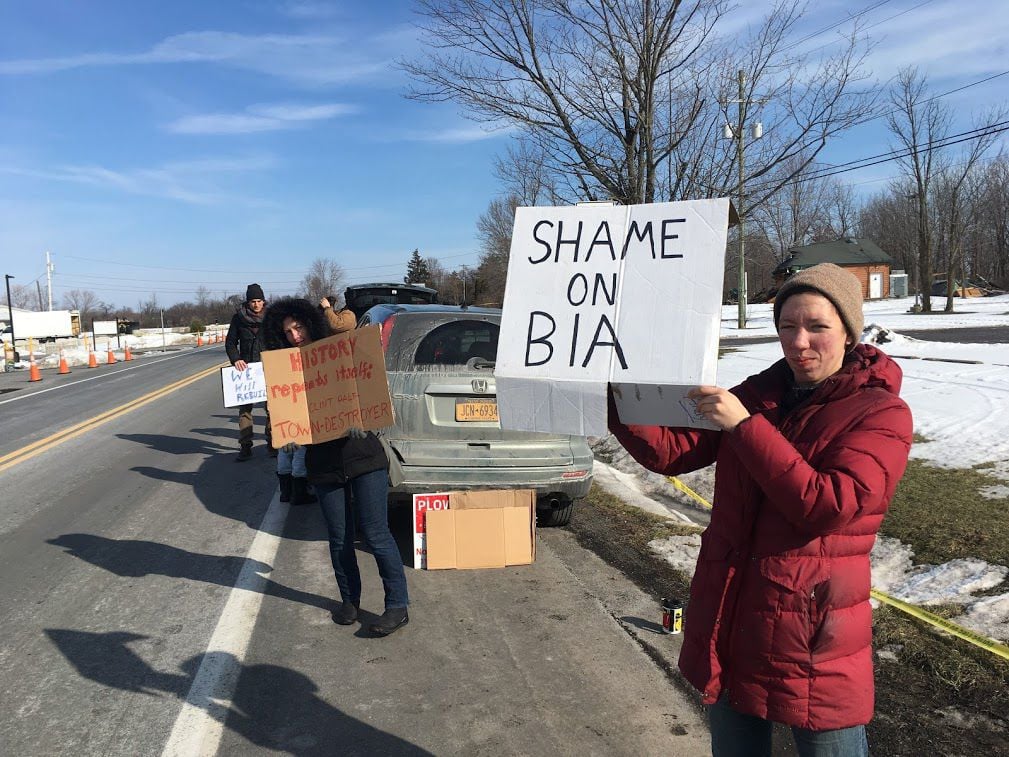 Protesters came out Sunday at the site where Cayuga Nation buildings were demolished on Saturday morning. 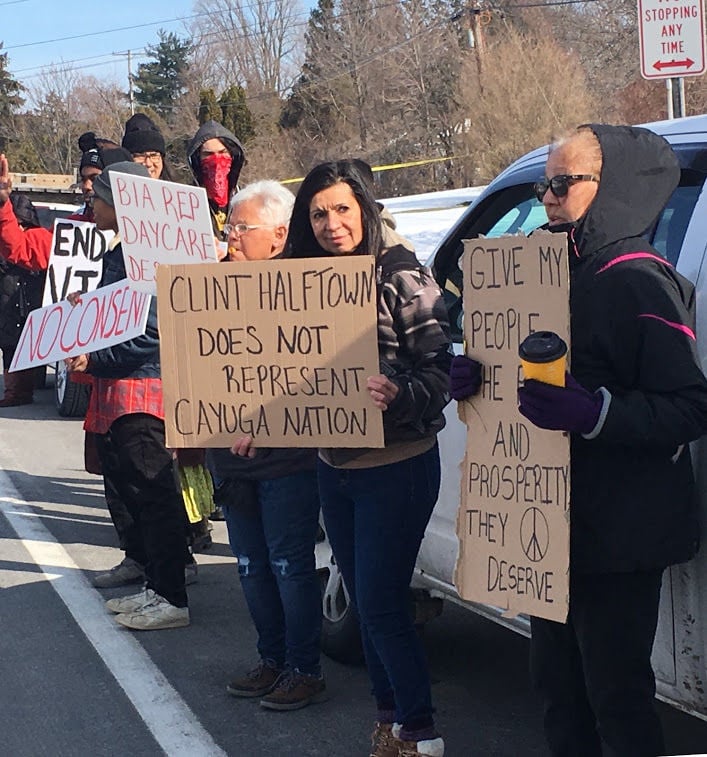 Protesters line the road across from Cayuga Nation buildings destroyed in a police raid ordered by the leadership council controlled by the nation's federal representative, Clint Halftown. 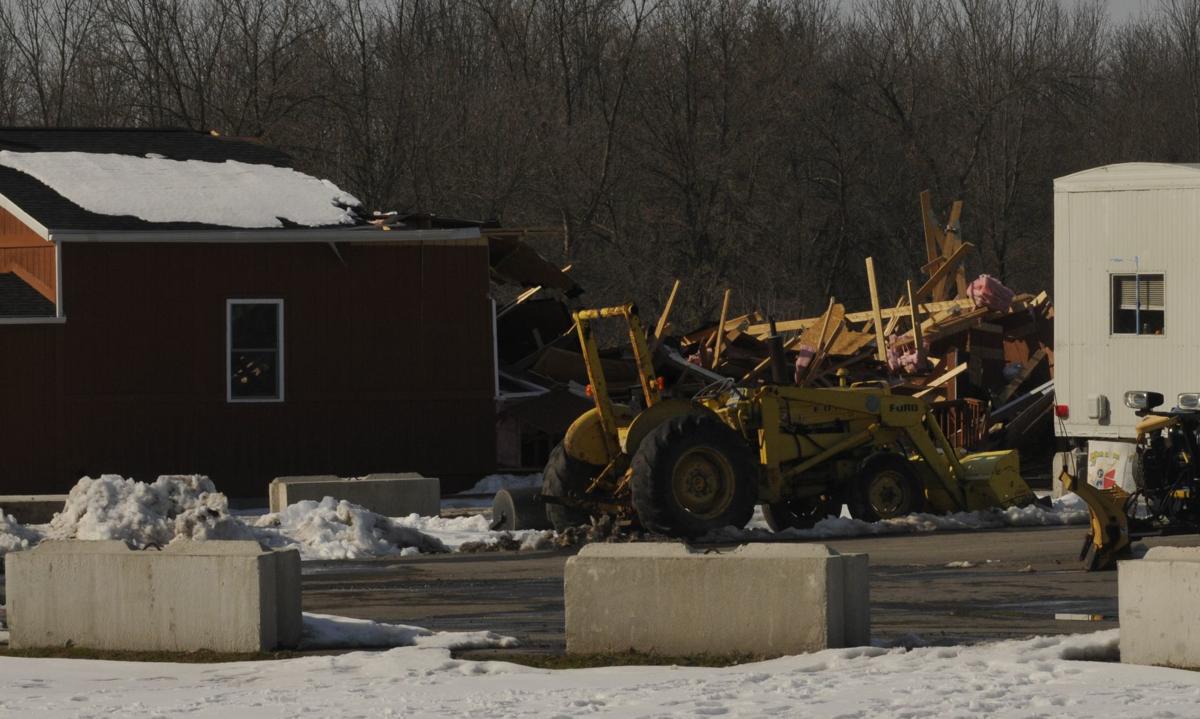 The U.S. Department of the Interior is gathering information in response to the demolition of Cayuga Indian Nation of New York buildings in Seneca Falls by the federally recognized leadership council and the detentions of people who were controlling those properties.

The overnight raid and demolitions took place Saturday at operations controlled since 2014 by a group of Cayuga Nation members and supporters who claim federal representative Clint Halftown and his council do not lead the nation under tribal law. Early Saturday morning, a police force established by Halftown raided properties, temporarily detained at least seven people and knocked down several buildings.

In a press release, the Halftown council said the actions were taken to "to detain persons who have violated (tribal) law, and the Nation has retaken possession of its properties." It said the demolitions were ordered by the Halftown council "to eliminate certain public safety issues, and it does not want these buildings to become a target for any further friction in the community going forward."

Legal counsel for the group that has operated businesses, a day care center, school and other activities at the sites blasted the actions as "viciously unlawful."

The Halftown council cited recent Interior Department decisions and letters to justify its actions. In a statement, though, the department said the detentions of people by the Cayuga Nation police "raise serious questions of state and federal jurisdiction. ... The Department remains committed to ensuring public safety and will work with federal, state, and local law enforcement as appropriate."

Meanwhile, the Seneca County Board of Supervisors held a special meeting Sunday to discuss the matter, and voted to approve multiple resolutions that call on federal authorities to take action.

One issue brought up is the legality of the detentions and demolitions on land that is owned in fee by the nation but not held in trust by the federal government for the nation. Such status would exempt properties from state and local jurisdiction. The Interior Department confirmed that it does not hold title in trust on any Cayuga Nation property. A land-into-trust application from the nation has been pending since 2005.

"The Department recognizes that federal law limits its authority to intervene in intra-tribal matters. However, detention of individuals on fee land, even tribal members alleged to be in violation of tribal law, can raise serious questions of state and federal jurisdiction,” the Interior Department statement said.

The Facebook page for one of the businesses that had operated in Seneca Falls, Cayuga Lake Trading Store, added a post Saturday night that said "we look to rebuild or find a new location so keep following our page for an update when we have one."

One of the nation's traditional government leaders, Sachem Sam George, sent The Citizen a letter in response to Saturday's developments. In it, George described how the Seneca Falls properties were used.

"The properties that were destroyed were used by the Cayuga people, for their livelihood, for learning our culture, our history and our language, to provide daycare for our children, to have our traditional garden with all of the people, especially our children, learning about our seeds and growing traditions. This area was our hub for Cayuga people," he wrote.

"This is much more than ‘Those properties were under the control of the group that opposes Halftown.’ It has been about the people who have come home to their territory living and thriving in their own community, on their traditional land."

Protesters came to the Seneca Falls properties holding signs condemning Halftown and calling on the federal government to take action.

"It is the sincere hope of all those affected that these wanton acts of destruction will cause the (Interior Department's) Bureau of Indian Affairs to finally see that Halftown does not have the interests of his own people at heart," a statement issued Sunday by traditional government leaders in conjunction with the protests said. "It is only the recognition of the BIA that has given him the power to perpetuate these abuses."

Protesters came out Sunday at the site where Cayuga Nation buildings were demolished on Saturday morning.

Protesters line the road across from Cayuga Nation buildings destroyed in a police raid ordered by the leadership council controlled by the nation's federal representative, Clint Halftown.