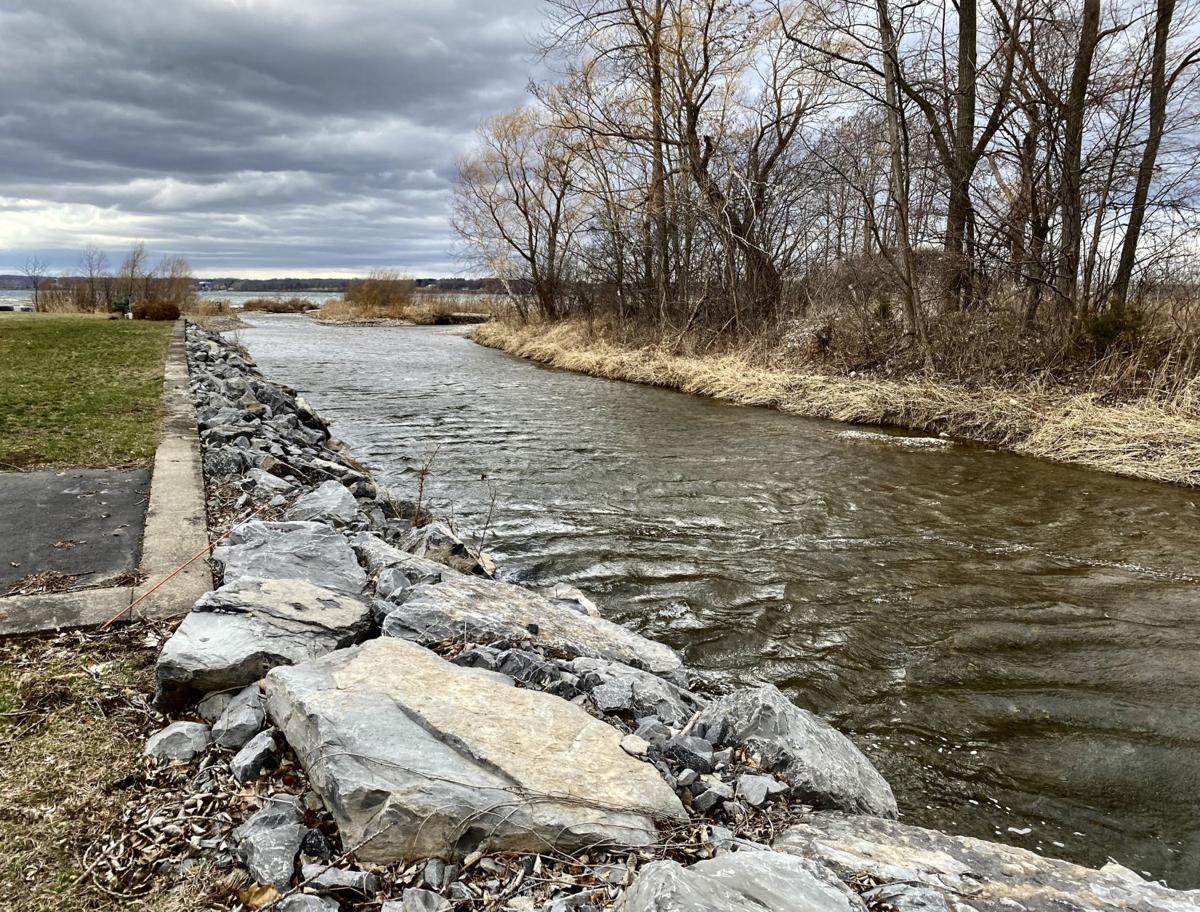 State officials said an unknown amount of manure from a large spill on March 7 at Ashland Farm in the town of Venice reached the mouth of Great Gully Creek, which opens up into Cayuga Lake.

A large southern Cayuga County farm is facing at least eight environmental law violation citations and financial penalties after an estimated 100,000 gallons of liquid manure overflowed from a storage pit earlier this month.

The state Department of Environmental Conservation issued a notice of violation on March 19 to Ashland Farm, a dairy based on Route 34B in the town of Venice, in connection with a reported spill on March 7. After DEC investigators responded to the farm on the day of the spill, their investigation uncovered numerous violations of state environmental law, according to the notice.

Eileen O'Connor, Cayuga County's director of environmental health, said the county was notified of the spill. The contamination did not come near any public drinking water supply intake pipes, she said.

As part of the immediate response to the overflow to bring its manure storage levels down, Ashland has been working with neighboring farms that have capacity to take some of the waste into their lagoons, and it is also identifying crop fields where some of the material can be safely spread.

The DEC violation notice includes citations to the farm for failing to monitor its manure storage structures, which included a lack of record-keeping and storage level markers that are required under Ashland's concentrated animal feeding operation permit issued in 2017. The farm is permitted for up to 1,167 young stock and 1,800 mature dairy cattle, though it's not clear how many animals are currently being kept.

Investigators also said the farm failed to follow its emergency plan on March 7 because it did not block road culverts "to contain and remove spills," according to the violation notice.

In addition to the failure to monitor and follow emergency plan citations, the DEC said the farm has modified or put into operation three waste storage structures without property compliance certification.

"Based on an initial review of facility operations, available storage, and available land base, it appears that the facility may have expanded beyond the capabilities of the farm to operate in accordance with the terms of the CAFO Permit," the violation notice said.

The farm did not respond to a message seeking comment on the DEC violation notice.

O'Connor brought the March 7 incident to the attention of the Cayuga County Board of Health at its monthly meeting on Tuesday. Board members were troubled by what they heard.

"To me it sounds like mismanagement," said Dr. John Cosachov, the board's president.

He noted that March is a time of year when farms are typically preparing for snow melt and heavy rain events, so it's troubling to hear that one allowed its manure storage levels to exceed capacity.

"If the lagoon is already at the point where it's at the point of brimming, that's a recipe for disaster," he said. "It sort of suggests to me that there's a level of 'I don't care' here."

The board asked if a heavy rain or melting event contributed to the March 7 spillover, but O'Connor said there is no indication that was the case. National Weather Service records show that a cumulative total of 0.13 inches of precipitation fell in nearby Auburn from March 1-7.

Board member Keith Batman, a county legislator whose district includes some land owned by Ashland Farm, asked O'Connor to keep the board informed of the financial penalties levied on the farm and he suggested the county let the DEC know that a significant fine is appropriate.

"If the investigation indicates that it really was just negligence, there's a big difference between that and an accident," Batman said. "I would hope that DEC is aware of those differences."

Based on her conversations with DEC, O'Connor said the state "is taking this very seriously. ... I believe there's going to be a significant enforcement action."

When asked about the potential for a financial penalty, DEC told The Citizen that "DEC’s investigation is ongoing and more information will be provided when available."

In the violation notice, the agency told the farm that it could face civil penalties of up to $37,500 per day for certain violations.

The farm was also ordered to take a number of corrective actions, "including an engineering evaluation of existing manure storage systems, storage capacity analysis, daily storage level reporting and updating the facility's Comprehensive Nutrient Management Plan," the agency told The Citizen. "DEC continues to oversee implementation of these permanent corrective measures and operational changes to prevent future incidents and ensure protection of public health and the environment."

In Cayuga County, a manure project to make lakes healthier

AURORA — Dozens gathered at the Aurora Inn Saturday for a wide-ranging discussion on the interaction between harmful algal blooms, climate cha…

A Cayuga County farm operating in the Cayuga Lake watershed has agreed to pay more than $100,000 in penalties and adhere to a strict state mon…

This Jordanian sanitation worker is a TikTok star

State officials said an unknown amount of manure from a large spill on March 7 at Ashland Farm in the town of Venice reached the mouth of Great Gully Creek, which opens up into Cayuga Lake.