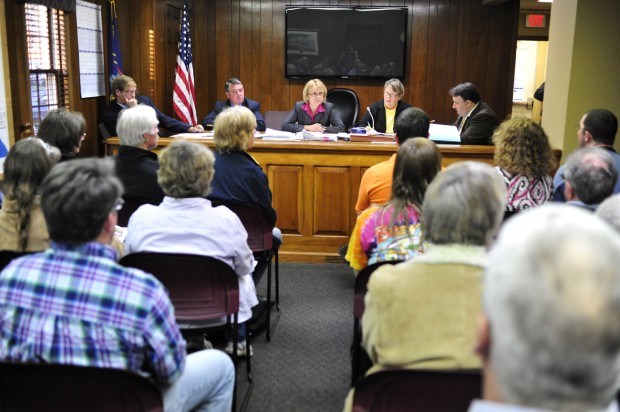 The Skaneateles Town Board opens the floor to the public to discuss a proposal to ban hydraulic fracturing in the town on Thursday. 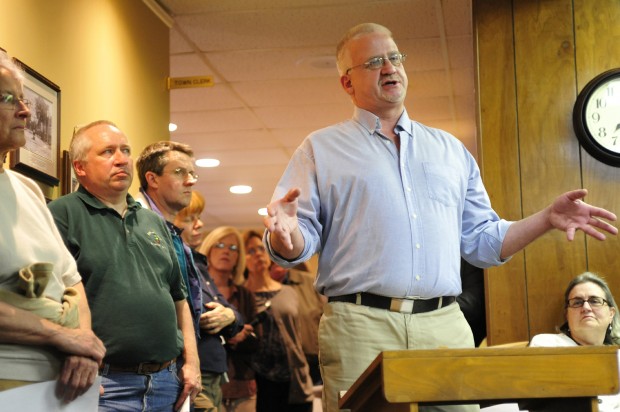 Dave Walker, of Skaneateles, speaks in favor of the proposed ban on hydrofracking during a public hearing Thursday during the town board meeting.

SKANEATELES | Resident sentiment ran heavily in favor of a horizontal high-volume hydraulic fracturing ban in the town of Skaneateles at a public hearing Thursday, but a vote on the matter was postponed until next month.

The Skaneateles law would amend the town's existing zoning law to ban exploration and extraction of natural gas and petroleum as well as facilities for their compression, processing, storage, transmission or disposal.

It was written with "advisement" from Ithaca environmental lawyers and anti-fracking advocates Helen and David Slottje and is similar to scores of similar laws passed by municipalities across the state.

About a dozen people spoke in favor of the ban compared with only two against. A few of them, including Joe Grasso, warned of the unexpected consequences that might come with a relatively new technology.

"New York state has had a number of environmental disasters over the past 40 to 50 years," Grasso said. "Until we understand more about the impact of fracking, I think the ban is a very responsible thing to do."

"I'm surprised more towns aren't having meetings and considering why not to have a ban on hydrofracking," he said. "I think there's a lot of energy and gas to get at, but the technology isn't there yet."

Existing activities would be grandfathered in under the new law, and the zoning board would reserve the right to grant variances for projects that would not "alter the essential character of the neighborhood," including consideration of the Skaneateles Lake watershed and the "social and economic impacts of traffic congestion, noise, dust, odors, emissions, solid waste generation and other nuisances."

"You talk about a ban on hydrofracking," he said. "But when I look at the bill, it looks like a ban on all drilling."

Young said he relies on lease payments from gas companies to help pay his town taxes and warned that the town could be exposing itself to hefty legal bills by taking on gas companies.

"A lot of this whole debate is not grounded in fact, it's grounded in fear," he said. "I'm sure the same debate happened 100 years ago when they were thinking about putting in electricity."

Environmental advocates have coalesced over the issue of horizontal high-volume hydraulic fracturing, a gas extraction technique they believe is fraught with risks to water quality and infrastructure.

Industry supporters counter that the drilling would be a boon to local economies and could help wean the region off foreign fuel sources.

After about 30 minutes of comments, the town board closed the hearing but postponed a vote until May 3 because two of the five board members were absent Thursday.

"I think it's important that everyone be here to take their position on it," Supervisor Terri Roney said.

The vote on the law will cap two years of study and debate by the town board.

A moratorium was passed in July 2010 and three extensions followed while the town board considered a permanent ban in the zoning law. A public comment period opened last September, and the planning board and zoning board of appeals have already voted their approval of the ban.

No timeline for state's decision

N.Y. DEC says review will continue through the summer. Page A5.

For the second time in two months, the Auburn Doubledays' general manager is stepping down.

AUBURN — In Cayuga County Court on Thursday, a mother addressed the 34-year-old man who "stole life and love" from her young son through repea…

Winter weather advisory for Saturday covers all of Cayuga County

More winter precipitation is on the way to the Cayuga County area.

The Skaneateles Town Board opens the floor to the public to discuss a proposal to ban hydraulic fracturing in the town on Thursday.

Dave Walker, of Skaneateles, speaks in favor of the proposed ban on hydrofracking during a public hearing Thursday during the town board meeting.