AURELIUS — When Denise Nevidomsky arrived at the drive-thru COVID-19 test kit distribution event in Aurelius around 9:20 a.m. Saturday, cars were lined up to on the approaching roadway.

The turn lane on Clark Street Road into the first entrance for the Fingerlakes Mall was densely packed with vehicles when the distribution event started at 10 a.m. Community Action Programs Cayuga/Seneca and the Cayuga County Office of Emergency Services worked with various other agencies to give free test kits to county residents at the mall and at sites in Cato and Moravia.

Nevidomsky, a CAP employee, said between passing out tests at the mall site that she believed the turnout at the event was due to people having difficulty finding the test kits at stores.

"I think it's great. We're able to help the community with this and people are so scared right now and we're helping, and that's all that matters," she said.

CAP employee Lauren Jones, who was assisting Nevidomsky, said she feels "there is a good demand for this in our county right now, adding that people "can't really get at-home tests in stores" and there are long lines at urgent care facilities.

There were three lanes at the mall where people could drive up to receive a kit. People would occasionally ask if they go could get two kits, but only one kit was being given out per car, with each containing two tests. Despite the long line of cars outside the mall, once people got to the areas sectioned off with traffic cones where kits were being handed, drivers were able to quickly a grab a test kit and be on their way.

Laurie Piccolo, the executive director for CAP, said Friday that the agency received approximately 3,300 kits from the county. Some kits were split among the distribution sites at the mall, the Cato-Meridian Community Recreation Center in Cato and the Veterans of Forgiven Wars Fairgrounds in Moravia, while the others are going to vulnerable populations throughout Cayuga County.

Piccolo said CAP is working with the Cayuga County Office for the Aging, the Booker T. Washington Community Center in Auburn, the Auburn Housing Authority and different shelters and food pantries, with those agencies set to distribute the tests kits to vulnerable people in the county.  The Aurelius, Moravia and Cato sites each had 720 tests kits.

The events came together in less than a week. Piccolo said Cayuga County Public Health Director Kathleen Cuddy called her Tuesday and that there was a conversation between the health department, the emergency services office and the newly-selected Cayuga County Legislature Chairman David Gould about how to get these test kits out to people. Cuddy had suggested having CAP distribute them, Piccolo said. Later that day, Cuddy called Piccolo to say Gould accepted the idea.

Various organizations have helped out, such as the agencies getting kits to vulnerable people and the groups involved at the distribution sites, such as the Auburn Police Department, the Cayuga County Sheriff's Office, the Cato-Meridian Community Recreation Center,  Moravia VFW Post 7127  and the Moravia Volunteer Fire Company. Piccolo said the logistics of accomplishing this county-wide distribution undertaking came through collaboration, such as law enforcement handling traffic flow at the sites. She thanked the various entities, workers and volunteers that helped set up everything up in a matter of days.

"It shows how great our community is," Piccolo said. "Logistics of traffic patterns aren't our forte or anything like that and to have law enforcement, which are also affected with short staffing due to COVID and so on and so forth, to assist us with such short notice without any complaints or anything like that, truly means a lot."

Julie Wall, another CAP employee, said at the mall event Saturday that seeing so many vehicles at the site "actually choked me up a little but when I arrived, that people need the test kits so badly that they'll get in a line."

After the distribution events were over, Piccolo said the Aurelius location was out of kits by 11:30 a.m. while around 90 kits remained at the Moravia and Cato spots when those events ended around noon. Those kits will be given to agencies who serve vulnerable populations in the county. She also noted that so many people wanted to volunteer that some had to be turned away.

"It was very nice that we had the support of the community," Piccolo said. 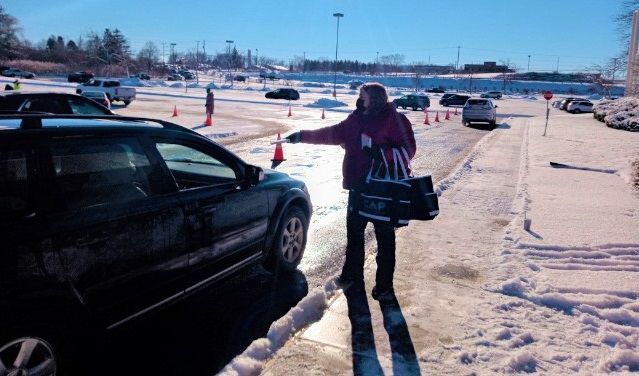 Julie Wall, an employee with Community Action Programs Cayuga/Seneca, hands out a COVID-19 test kit at a drive-thru distribution event at the Fingerlakes Mall in Aurelius Saturday.

A line of cars try to get into the Fingerlakes Mall in Aurelius for a drive-thru COVID-19 test kit distribution event Saturday.