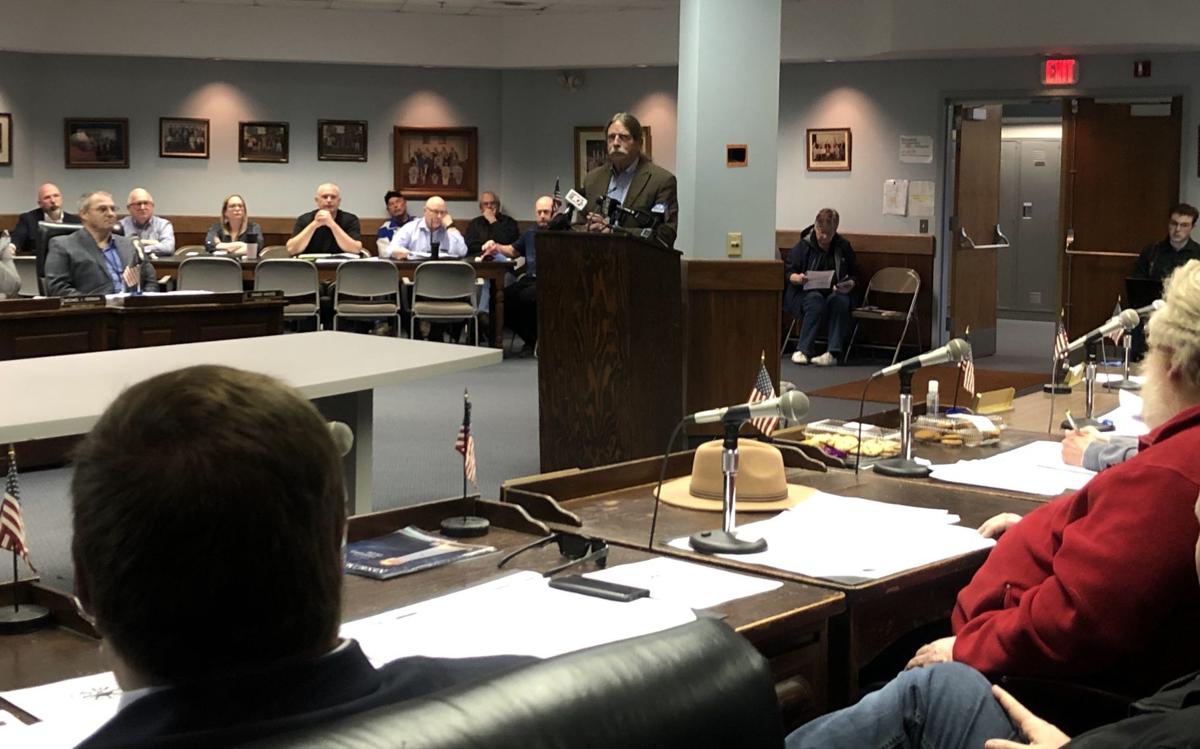 Joe Heath, legal counsel for the traditional Cayuga Nation chiefs and clan mothers, addresses the Seneca County Board of Supervisors during a public commenting period of the meeting. 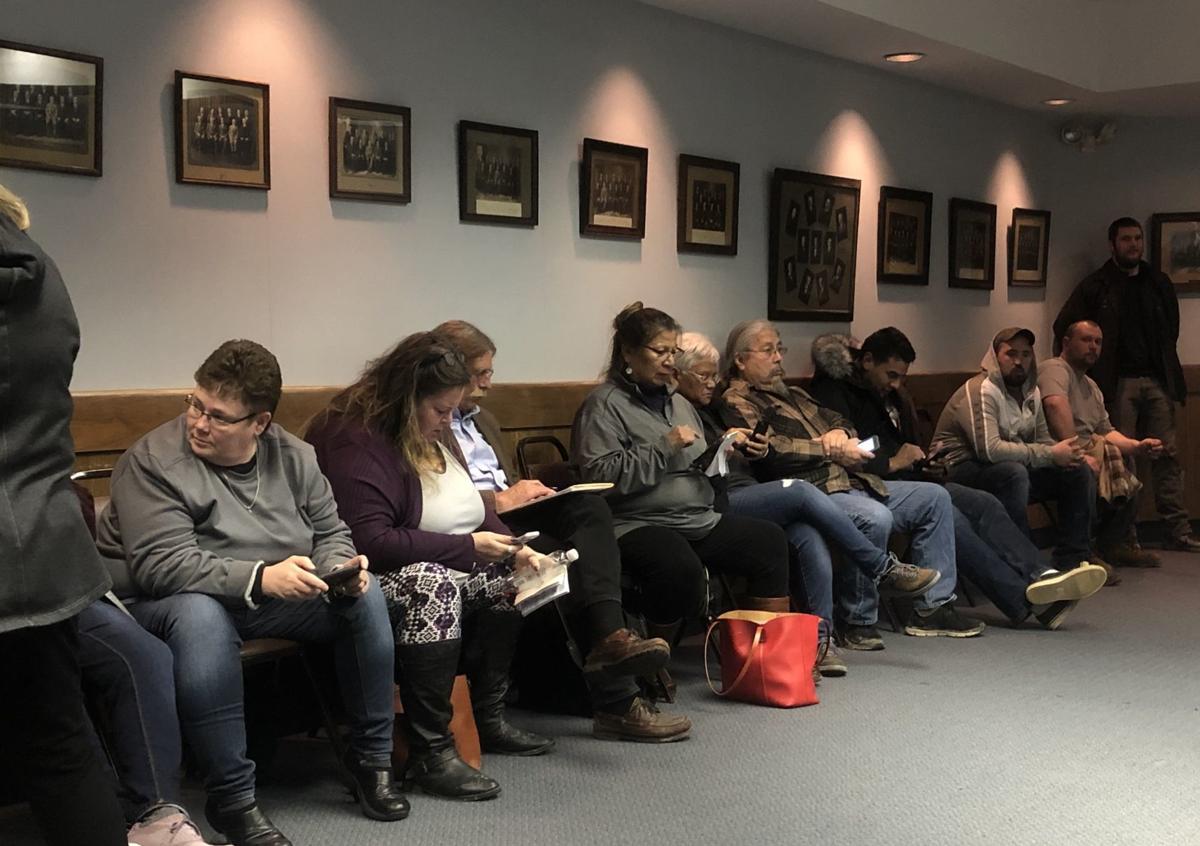 Seneca Falls residents wait for members of the Seneca County Board of Supervisors to come out of executive session during a well-attended emergency meeting Sunday afternoon. 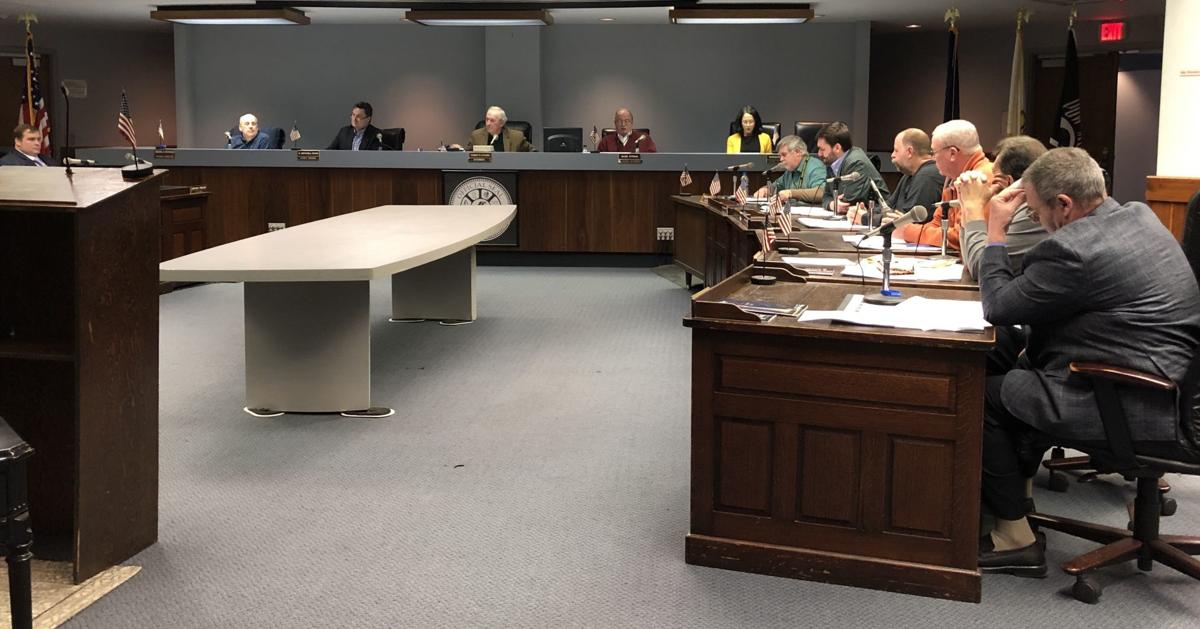 The Seneca County Board of Supervisors holds an emergency meeting Sunday afternoon to prepare a response to the Cayuga Nation's raid and demolition of several properties in Seneca Falls early Saturday morning.

WATERLOO — Thirty-two Cayuga children woke up Saturday morning without a place to go to school. And, after several other Seneca Falls properties were raided and demolished in the early morning, 60 to 70 people woke up without jobs.

That was the impact described to the Seneca County Board of Supervisors during an emergency meeting in the aftermath of the raid ordered by the Cayuga Nation leadership council of Clint Halftown, who had the Cayuga Nation Police Department seize and demolish buildings in Seneca Falls that included a schoolhouse, day care, the Cayuga Nation Trading Store and a sugar shack. All of the sites were operated by members of the nation who oppose Halftown's leadership.

Police reported Saturday that at least seven people were temporarily detained. One person was charged with possessing what is suspected to be methamphetamine. The unidentified man was released on his own recognizance.

"Right now, there's a lot of feelings of devastation," Leanna Young, a spokesperson for the Cayuga Nation community in Seneca Falls, said at the meeting. For those impacted, she said the main goal is to prevent escalation and come to a peaceful resolution.

Halftown, whose leadership as the Cayuga Nation's federal representative is disputed by traditional leaders but formally recognized by the federal government, claimed Saturday the properties were seized to enforce tribal law and demolished to prevent further public safety issues and future friction.

He also cited a June letter from the Bureau of Indian affairs to the Seneca Falls Police Department allowing the Nation to enforce its laws within its reservation.

However, “viciously unlawful" were the words Joe Heath, attorney for the traditional Cayuga Nation chiefs and clan mothers, used to describe the action.

Heath and other officials addressed the Seneca County Board of Supervisors during a special meeting on Sunday afternoon.

The board went into an executive session to discuss "pending litigation," but Board Chairman Robert Hayssen said prior to the meeting it was hard to know what the outcome of the closed session would be. “We’ll probably take some action but we don’t know yet,” he said just before the board entered into the discussion.

During an earlier public commenting period, several people called on the board to pass resolutions requesting the prosecution of Halftown and his removal, as well as freezing of $287,000 in federal Housing and Urban Development funding recently awarded to the Cayuga Nation until another leader is appointed.

Heath said Halftown's actions were not the result of Cayuga Nation law but of the "almost complete authority" given to Halftown by the Department of the Interior and the Bureau of Indian Affairs.

He continued that the Cayugas affected are willing to work toward a solution. "They are as shocked by this as anyone. Their livelihoods have been destroyed. They're very worried about their own personal safety, whether or not he'll come and knock down their houses next," Heath said.

Young told the board that Halftown refused their attempts at diplomacy. "There were no prior discussions. There was no warning. There was no respect given to our elders and to our future generations," she said.

Former Chairman of the Seneca County Indian Affairs committee Robert Shipley called Halftown's actions "alarming" and "reckless." He asked the board to pass a resolution requesting the BIA remove Halftown as the federally-recognized leader.

Hayssen also invited Halftown's legal counsel to speak, but was informed by people in crowd that he left.

Board members exited the executive session about an hour later, when Seneca Falls Supervisor Ralph Lott offered three resolutions — all of which passed unanimously and without discussion.

The board first requested that Sens. Chuck Schumer, Kirsten Gillibrand and Rep. Tom Reed to attempt to freeze HUD funding to the Cayuga Nation until leadership complies with local laws and addresses public safety concerns. On Monday, a HUD spokesman confirmed that the agency is aware of and looking into the matter.

The second resolution requests the nation's law enforcement be replaced by U.S. Marshals to "prevent future violence and the possible loss of life."

They also approved a measure calling on James Kennedy Jr., U.S. attorney for the Western District of New York, to "investigate and take appropriate actions with regards to the recent conduct" in Seneca Falls.

"What we can ensure, though, is that any attempt by the Cayuga Indian Nation to cause any injury, damage or destruction to any of our citizens in Seneca County and particularly the residents of Seneca Falls —  they will be dealt with to the full extent of the law," he said.

The U.S. Department of the Interior said Sunday it's gathering information for an investigation into the demolition and detention of the individuals on the land owned in fee by the nation but not held in trust by the federal government for the nation.

In a statement, the department said detaining individuals on such land can "raise serious questions of state and federal jurisdiction" even if the individuals are tribal members alleged to be in violation of tribal law.

Hayssen said he was in contact with Gov. Andrew Cuomo's office and Rep. Reed's office, but didn't know whether the county has had contact with the Department of the Interior.

The Cayuga Indian Nation of New York is receiving nearly $90,000 in coronavirus relief funds to help with its low-income housing program, the …

Joe Heath, legal counsel for the traditional Cayuga Nation chiefs and clan mothers, addresses the Seneca County Board of Supervisors during a public commenting period of the meeting.

Seneca Falls residents wait for members of the Seneca County Board of Supervisors to come out of executive session during a well-attended emergency meeting Sunday afternoon.

The Seneca County Board of Supervisors holds an emergency meeting Sunday afternoon to prepare a response to the Cayuga Nation's raid and demolition of several properties in Seneca Falls early Saturday morning.