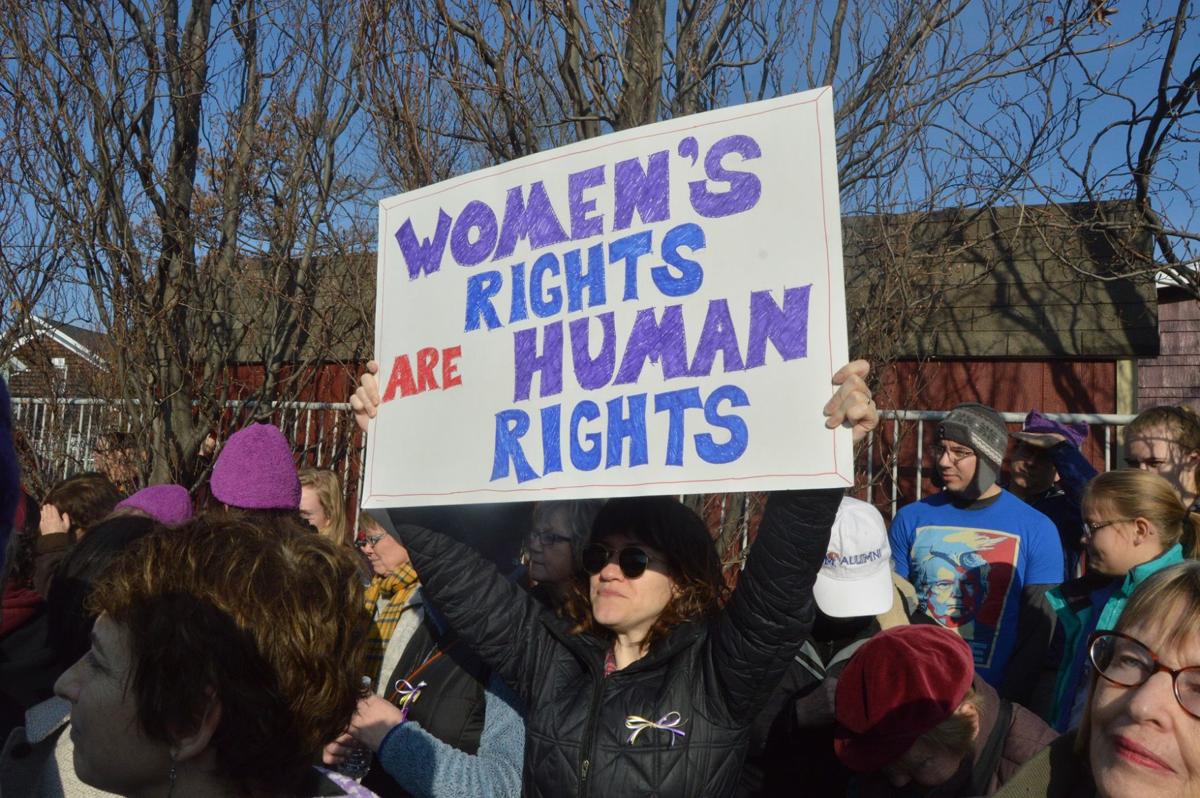 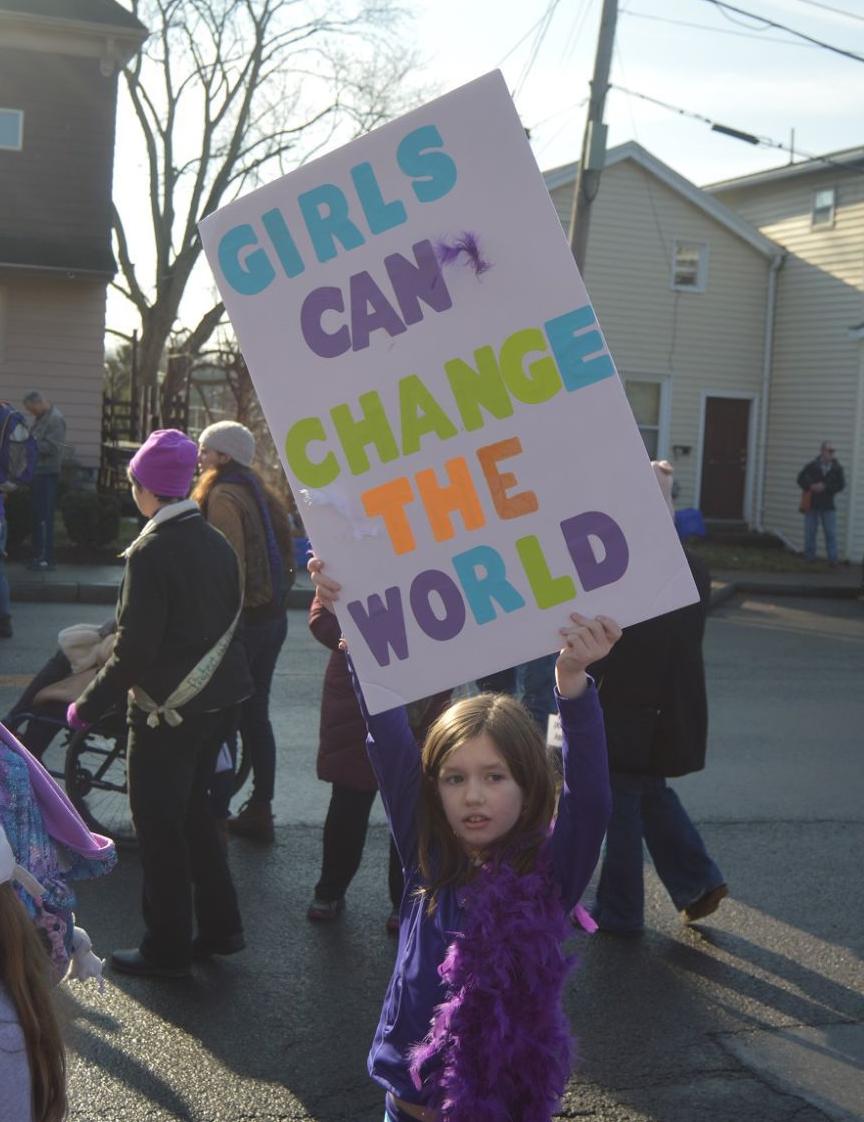 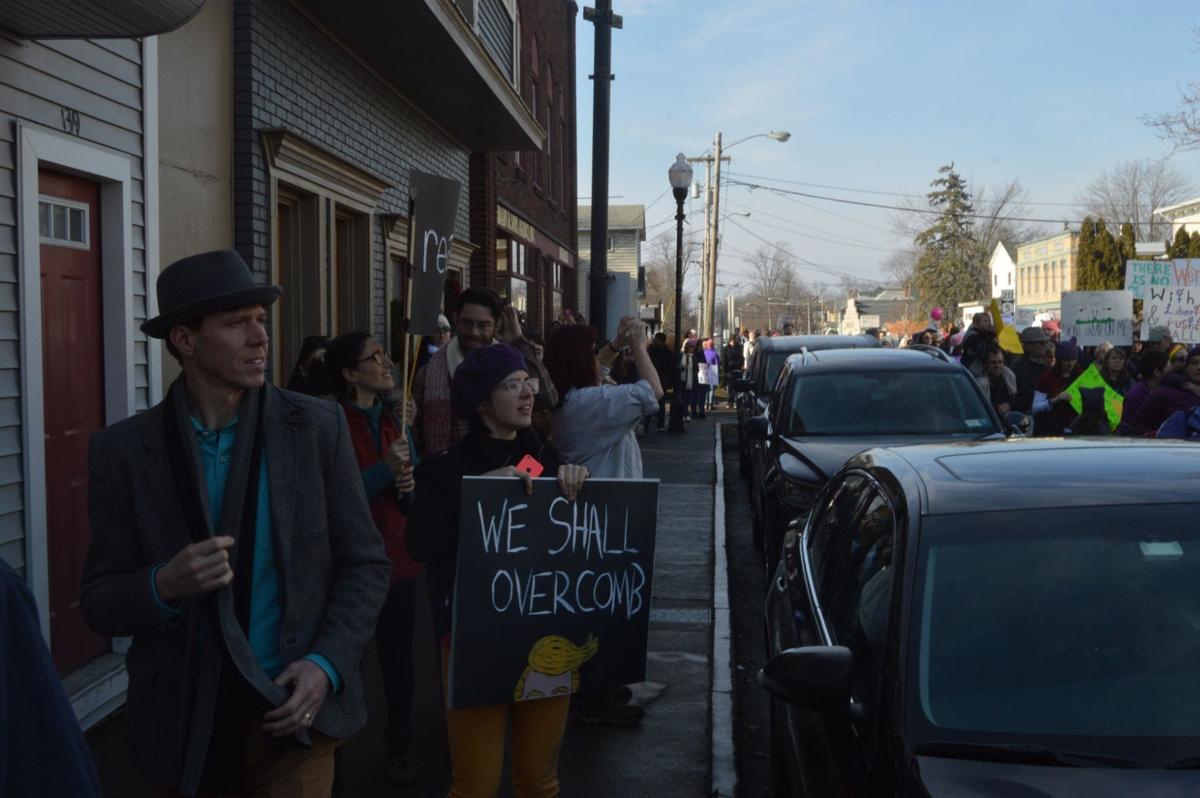 Participants at the Women March in Seneca Falls on Saturday.

SENECA FALLS — Leah Ntuala was out at the Women's March in Seneca Falls armed with a nervous smile and a long purple scarf with a cross and other symbols on it on Saturday afternoon. While she said she couldn't speak for the crowds of people chanting and brandishing signs, she did have an idea of why they were there.

"To bear witness, to form a community to let people know that they are not alone, they are loved, they are seen and they are heard," Ntuala said.

Ntuala, who serves as pastor at the town's First Presbyterian Church, said she had a hand in helping to organize the event along with Becky Bly, of the store WomanMade Products.

The march unfolded the same day as the event for women's rights and human rights at Washington D.C. and other places throughout the country. People in the crowd had signs, many of which words and images expressing support for human rights and featuring references to Donald Trump, who was sworn in as the president of the United States Friday.

Standing outside of the church, which was serving as the site for a rally, Ntuala said she has heard a wide range of opinions since Trump's electoral victory in November.

"I've heard from a lot of people that they are afraid their rights will be taken away. I've heard from others that we just need to wait and see, and I've been told that religion doesn't have any place in politics," Ntuala said.

She also notes that she has been told by others that they have hope for the future.

The event officially began at the Woman’s Rights National Historical Park, the location of the first woman's right convention in 1848.

Samantha Sugarman, smiling ear to ear among the sea of scrarves and signs, came out with some friends for the event.

"What brings me out here is that many people are frustrated and disconnected, and marches like this allow us to come together and one people to stand up for our rights and what we believe in," Sugarman said.

Sugarman said she is worried about whether certain human rights will be upheld in light of the new administration and protests like this provide her with confidence in what will come next.

"I am concerned in a way, but I have so much hope," Sugarman said.

Diane Lo Dolce, who carried a sign with the words "Your tiny hands can't grab my rights or anything else!" made what her brought to the event clear.

"Having an idiot for a president," Lo Dolce said.

Amy Gregory, a reverend at a United Methodist church based in Binghamton, said she has continually fought for the rights of the LBGTQ community and other vulnerable populations. Gregory came with her "feminist husband" Bill Phillips, among others.

Gregory explained how she viewed feminism.

"I think it's as simple as believing that women are equal to men and not equal and not lesser," Gregory said.

Phillips said he was raised by his mother, a single parent who took care of three boys. He believes his mother, who passed away in 2010, would have been at the event in a wheelchair if she was still alive. Phillips said she was with him in spirit. He also referenced other suffragists who had previously been on those same streets.

HIT: To the The Women March in Seneca Falls, a local event that took place Saturday in conjunction with the women's marches held that day arou…

Participants at the Women March in Seneca Falls on Saturday.