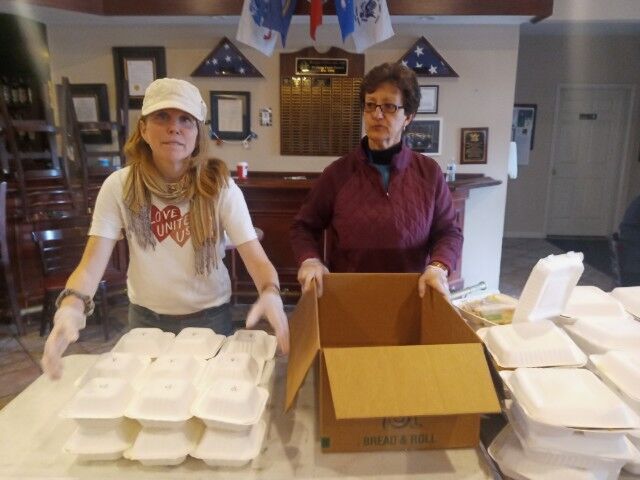 Volunteers Shannon Reilly and Louella "Lou" David help during the Salvation Army's Thanksgiving meal event at the Knights of Columbus in Auburn Thursday. 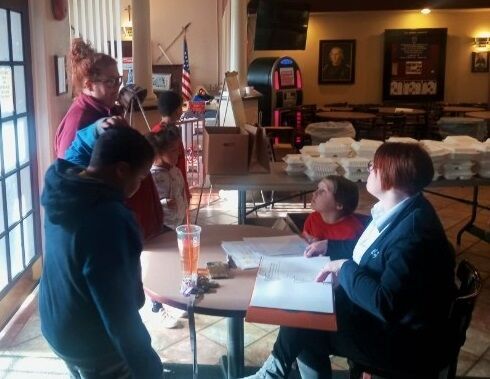 Captain Holly Johnson and daughter Livvy, 7, talk to people picking up meals at the Salvation Army's Thanksgiving meal event at the Knights of Columbus in Auburn Thursday.

AUBURN — The Salvation Army had previously helped Richard Taradejna during some difficulties in his life, so he lent his culinary skills to the organization in Auburn for Thanksgiving.

Taradejna, more commonly known as "Chef Flip," served as the chef for the Salvation Army of Auburn's annual Thanksgiving meal event Thursday, as he has done for years. A total of 386 meals made by Taradejna and various volunteers were delivered to people that morning and over 100 meals were picked up at the Knights of Columbus.

Since he went to the organization's soup kitchen when he was "down and out," Taradejna, now the head chef at Highland Park Golf Club, said he was glad to once again whip up meals for the event.

"I love cooking and I love helping out," he said.

Shannon Reilly and Auburn Fire Department Assistant Chief Jeff Clark, out of uniform, were among the volunteers helping out, as containers packed with turkey, potatoes and other traditional holiday goods were gathered at tables. Reilly's children Quinn Reilly, 14, and Padraig "Paddy" Reilly, 13, also took part.

Captain Dan Johnson, who co-runs the Auburn Salvation Army with his wife and fellow captain, Holly, said preparation for the meals started Monday. Around 100 volunteers helped out at different points during the week, Johnson said, adding "We're very blessed." He noted that some families in the area have made it a family tradition to assist the event.

Johnson talked about what it was like seeing so many people make sure others in need were fed for the holiday.

"It blesses our hearts. It helps accomplish our mission of serving this community with any and everything that they need, while sharing the gospel of Jesus Christ," he said.

Acknowledging different businesses that helped with the event, including Nucor Steel and insurance agency Aflac, Johnson also thanked the Knights of Columbus for letting the Salvation Army use their building, since Salvation Army's facility is in need of some repairs. He said Joe Calarco and Timothy Donovan helped set up the organization with using the Knights' building.

After grabbing a container for a meal, Roland Crouch, who has received assistance from the Salvation Army and volunteered for them in the past, praised those who participated.

"I think it's really decent of the captain and the people to do this because that's what the Salvation Army's about, they're about being a Christian organization, helping out people as much as they possibly can," Crouch said.

Volunteer Louella "Lou" David said she helped in memory of her husband Butch David, who died in February. Her stepchildren invited her out of the holiday, but she decided to assist at the event.

"I just wanted to do this, I've always wanted to do it but I always cook for my family, now the kids are all grown up and my husband's gone, so I'm like, 'I got to go help people,'" she said.

Having delivered meals that morning, David talked about what it's like seeing the looks on people's faces.

"They're so happy," she said. "Just seeing the way that people have to live, it's just not fair. Anything I can do to help."

A Geneva man wanted in the June shooting outside an Auburn bar and restaurant has been arrested.

The Auburn Police Department is advising people to be wary of a possible scam from someone claiming to represent a utility company.

Salmonella outbreak with unknown cause in Cayuga, other NY counties

Millions of people have watched the Macy's Thanksgiving Day parade for decades. A man originally from Auburn is set to go one step farther nex…

Two Auburn residents are facing felony charges after a report of a home invasion robbery in the town of Owasco on Wednesday afternoon.

Volunteers Shannon Reilly and Louella "Lou" David help during the Salvation Army's Thanksgiving meal event at the Knights of Columbus in Auburn Thursday.

Captain Holly Johnson and daughter Livvy, 7, talk to people picking up meals at the Salvation Army's Thanksgiving meal event at the Knights of Columbus in Auburn Thursday.