A digital concept design of what the Merriman Street Family Transitions Project would look like. 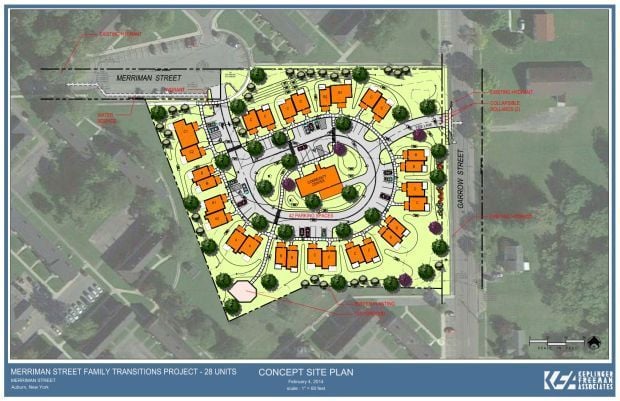 A site plan of the Merriman Street Family Transitions Project.

An Auburn-based supportive housing project is one of several across New York that has received a share of more than $40 million in state grant funding.

The funds have been awarded to support the construction of 276 housing units for homeless victims and families through the state's Homeless Housing and Assistance Program, Gov. Andrew Cuomo announced Thursday.

The Merriman Street Family Transitions Project, as proposed by the Auburn Housing Authority, accounts for 28 units. These living spaces, four of which are transitional, would be targeted toward homeless single women and families in Cayuga County.

The Auburn Housing Authority Development Corporation, AHA's nonprofit affiliate, was awarded approximately $6.4 million by the state toward the Merriman Street project. The Auburn project received the largest amount of funds out the of 11 grant recipients.

In a statement, Cuomo said the programs offered by the recipients are proven to bring stability and security to residents and families made vulnerable by homelessness and strife.

The Merriman Street project is an extension of the Family Transitions Program, said Stephanie Hutchinson, executive director of AHA. The program is a partnership between the Rescue Mission, AHA and Cayuga County Health and Human Services.

Hutchinson said homeless individuals and families would be referred into the transitional care of AHA for 90 days by the county. The Rescue Mission would then work to find permanent housing for each case.

Homelessness has been a large problem in Cayuga County among single women and families, Hutchinson said. She noted that many homeless cases in the county often stay in motels, and the goal of the program is to end the cycle and stabilize these individuals and families.

"It's a huge deal for our community," Hutchinson said. "It's definitely the biggest investment (the state has) made in homeless housing in a long time."

AHA is hoping to get the authorization from the state to begin the project by early spring of 2015. Construction is anticipated to take around one year to complete, and Hutchinson said AHA hoping to have the project wrapped up by August 2016 at the latest.

AUBURN | Construction is underway on a $6.4 million housing project developed for Cayuga County's population of homeless families and single women.

The Auburn Housing Authority is looking to make an estimated $6 million addition to its group of affordable housing complexes.

A digital concept design of what the Merriman Street Family Transitions Project would look like.

A site plan of the Merriman Street Family Transitions Project.