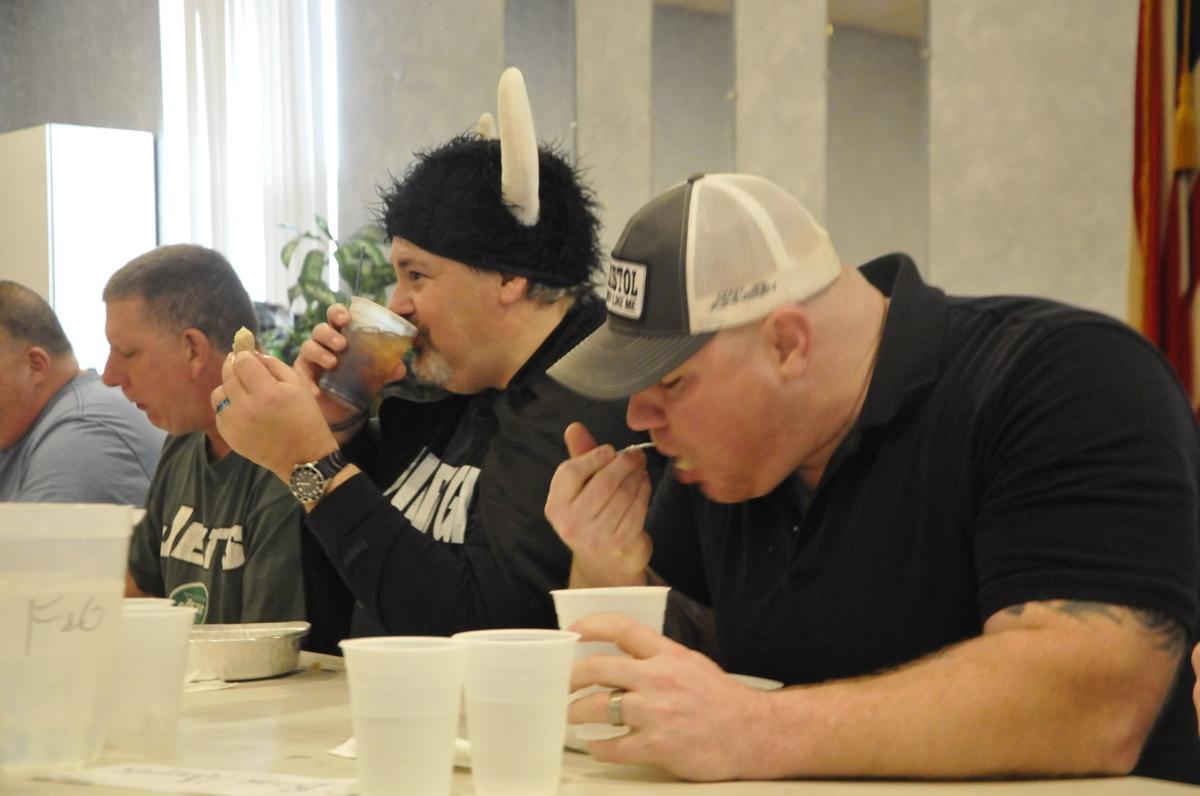 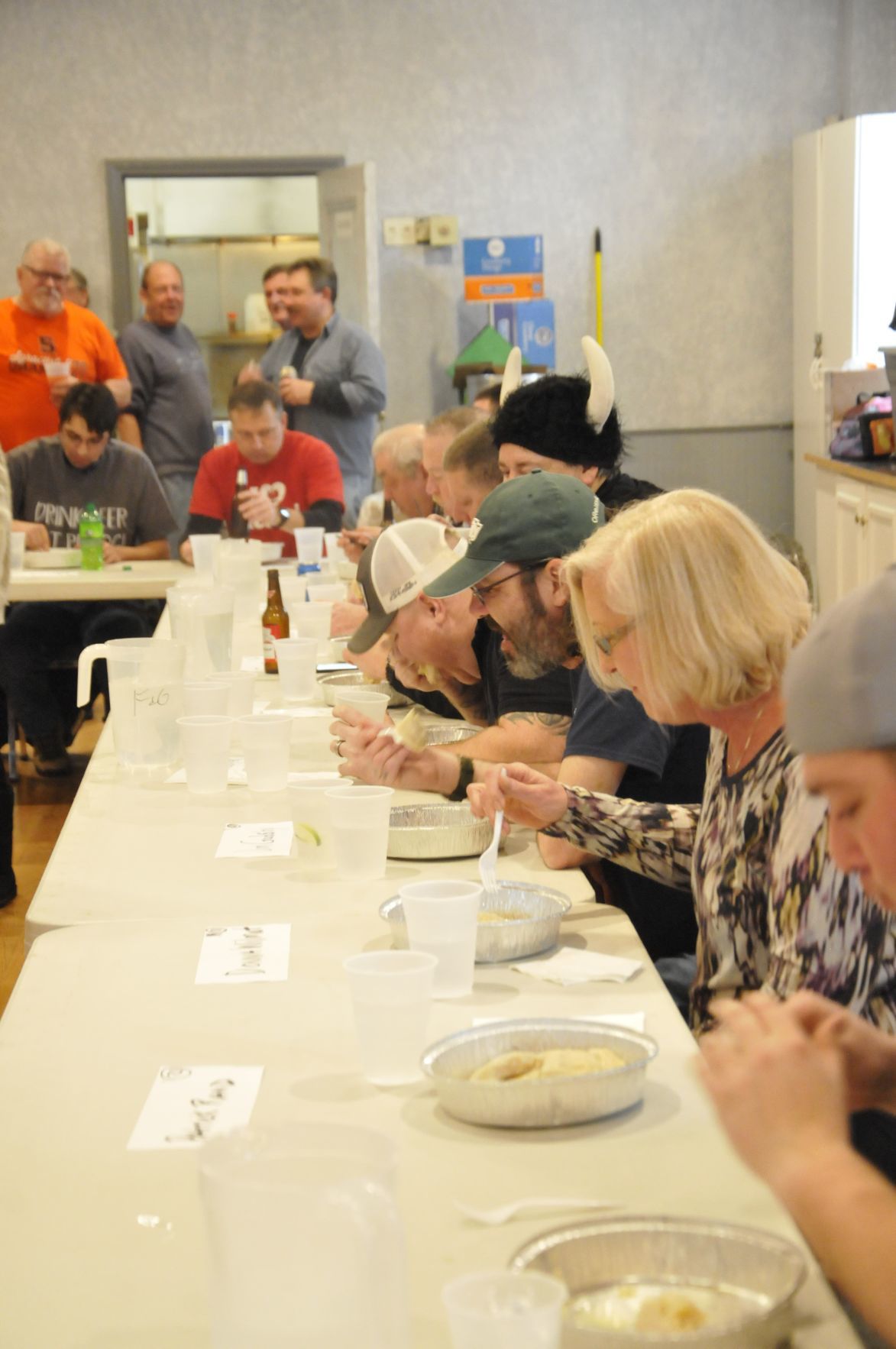 Competitors take on plats full of pierogiss at the 10th annual Pierogi Eating Contest at the Ukrainian National Club in Auburn Saturday. 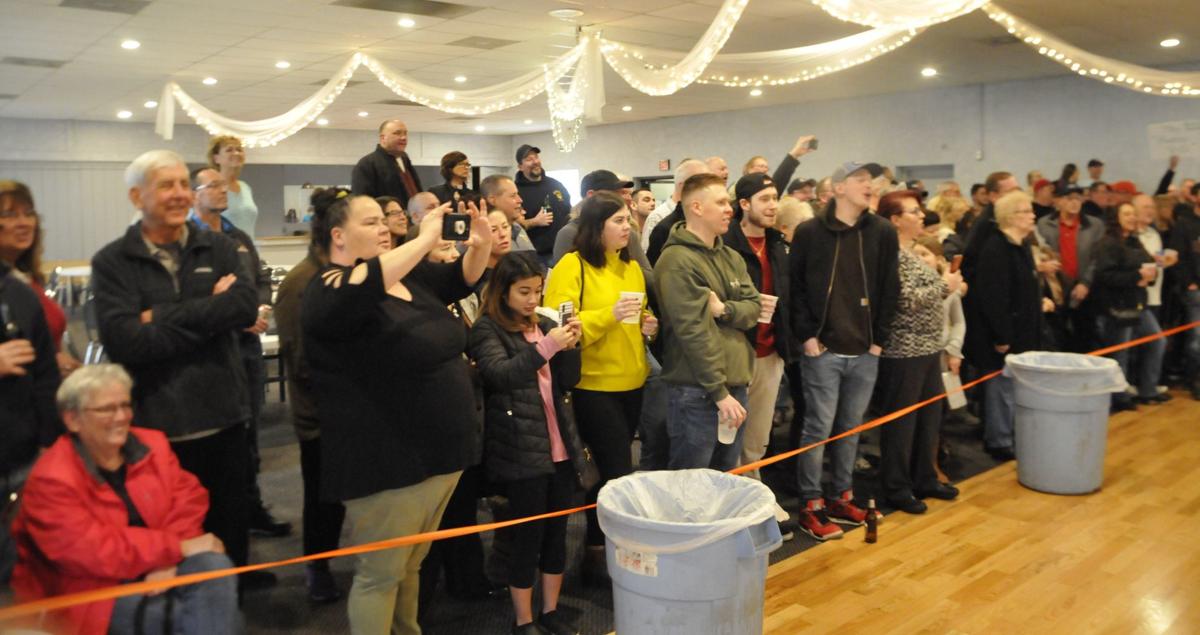 Garbage cans are at the ready near the competition table — just in case.

AUBURN — Brian Hooper cleared out six pierogies in around 25 seconds.

Raising his arm to signal for more, Hooper went on to blaze through more potato-filled dumplings at the 10th annual Pierogi Eating Contest at the Ukrainian National Club in Auburn Saturday.

The event's proceeds go to different causes every year, with the Auburn Hunger Task Force receiving the funds this year. Fifteen people participated in this year's competition to eat the most pierogies in eight minutes, watched by a crowd armed with cell phones.

Radio show host Dan Preston, who wore a pierogi-themed shirt with a black cape and a horned hat, sat next to Hooper, who had won the last two competitions. Early on in the contest, Preston looked over at Hooper's progress, declaring "This guy's a beast!" Some people in the crowd chanted "Hoop," Hooper's nickname, as other people shouted throughout the competition.

Entrant Connor Teneyck went through his pierogies steadily, breaking into animated shaking and other movements to psych himself up to press on. Other constants and people in the crowd encourage him to continue, despite the occasional pained expressions on his face.

At the end, Hooper was declared the winner after depleting 32 pierogies. Still readily mobile despite all he ate, Hopper said after the competition that while "the food is really, really good," he gets involved because of the causes the event is dedicated to every year.

While he noted he wolfed down more last year, Hooper credited his "racing fork," the lucky fork he brought with him that he's used all three years. He said felt fine afterward, adding that he was "a little stuffed, but it's not bad."

Teneyck leaned over for a moment after the contest was done, with 17 pierogies eaten. Looking like he had ended 12 rounds with a championship boxer, he said he loves taking on challenges, and that someone put him up to participate in the event. He said he felt confident when he started.

"It felt great going in, but it was a little overwhelming toward the end," he said.

Before the event began, Kim Patch, a member of the board of directors for the Auburn Hunger Task Force, said the organization's creation was inspired by the recent closure of First Love Ministries and its soup kitchen.

"My heart was broken when they closed their doors, because I knew how many people it would affect," she said.

She said the task force plans to open a soup kitchen with the atmosphere of a restaurant to "serve food with dignity to people" and give people a sustainable, consistent place they can go to socialize.

Amanda Pelletier, who is also on the task force's board, said that one of the goals of the task force is to make sure people don't have to go to multiple locations and to provide a consistent food schedule for people.

Patch beamed as she looked at all the people at the club, and said she was thrilled by the support.

"We may be brand new, but the support shown lets me know this is a reality. We are going to have a soup kitchen, and we're going to go even further with it to make it sustainable so that we don't have to rely on grants," she said.

The event, which included takeout dinners and raffles, raised $8,801.

Preston, who still had the cape and hat on after the event, said he was fine looking silly to draw support for the cause.

"That's what it's all about, is the cause. I spent 25 bucks to eat eight pierogies. It's not about trying to win the contest, it's about raising money for a good cause," he said. "There are people out there that are going hungry, and we're playing with food, so raise the money and help those who need it."

The Citizen's top 10 most-read stories of the week include a fire at a Cayuga County country club, a new Union Springs bakery and Cayuga Count…

Competitors take on plats full of pierogiss at the 10th annual Pierogi Eating Contest at the Ukrainian National Club in Auburn Saturday.

Garbage cans are at the ready near the competition table — just in case.