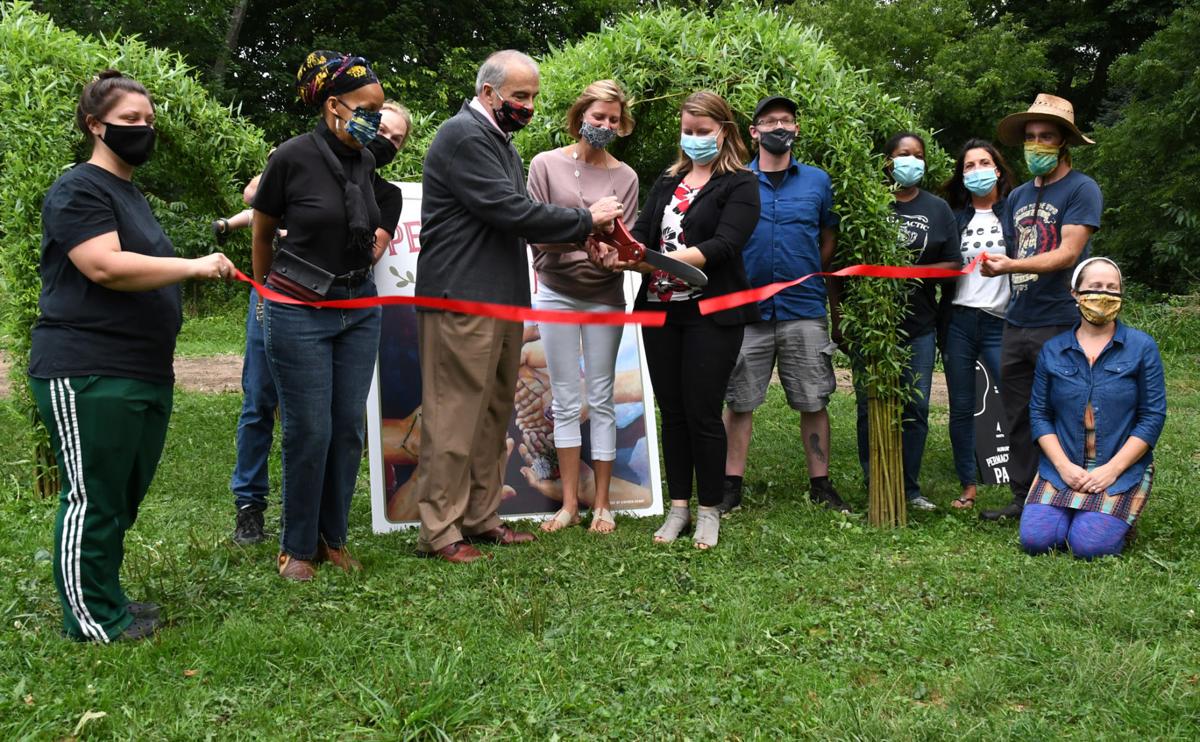 Volunteers and city employees cut the ribbon to open the Miles Lepak Permaculture Park in Auburn on Tuesday evening. 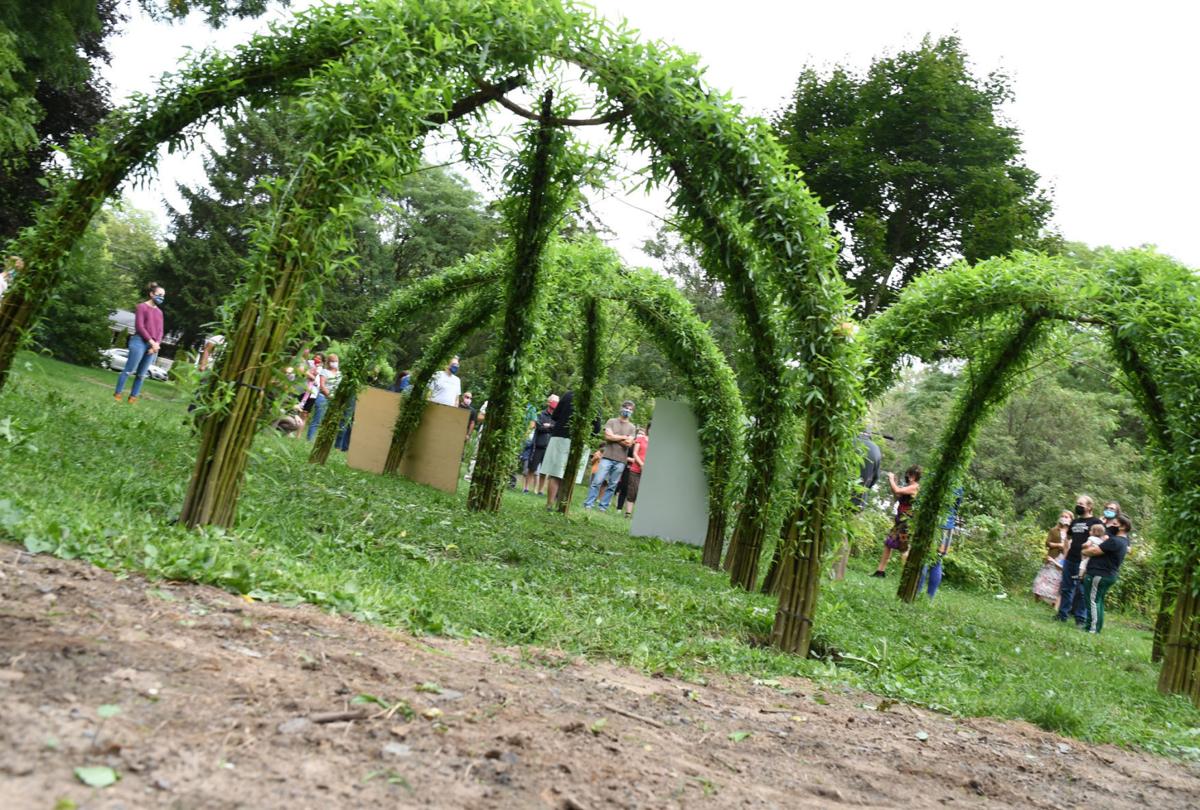 The willow structures add to the landscape of the park. 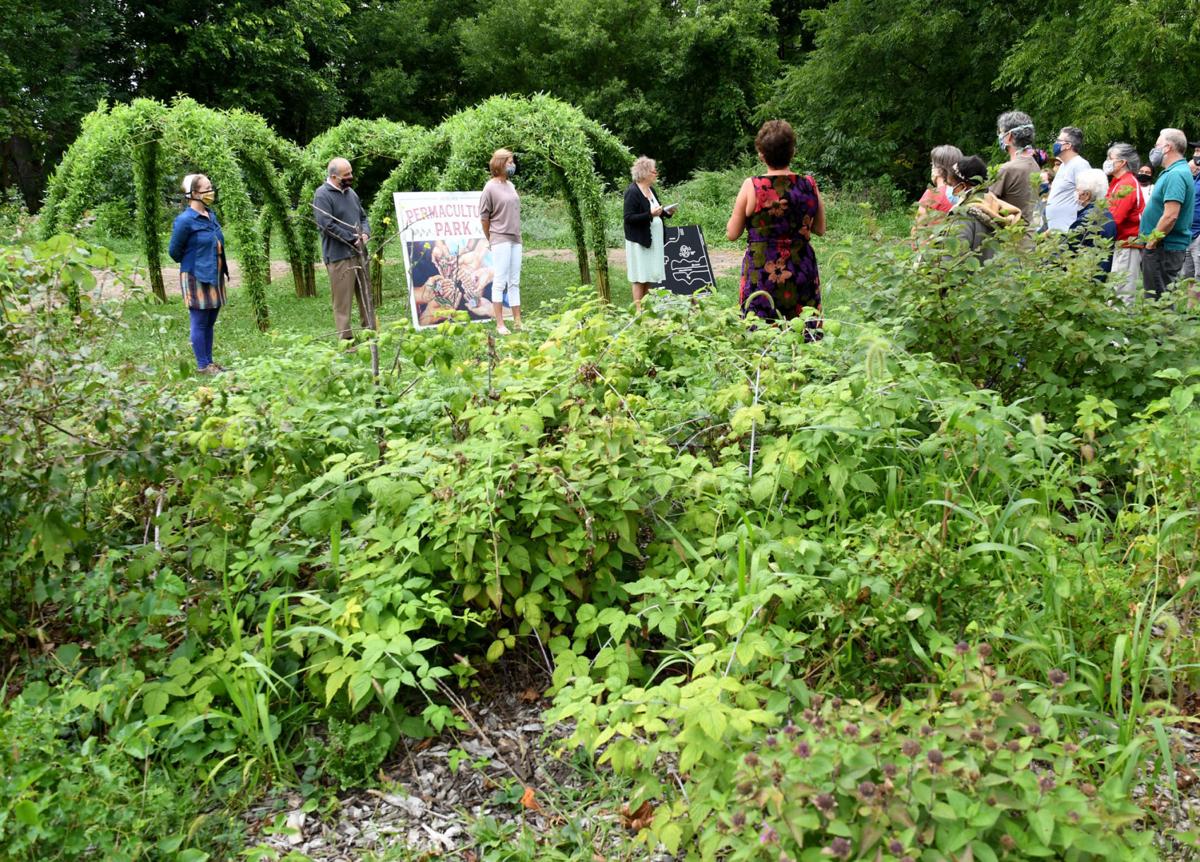 A small gathering joined the opening of the Auburn Permaculture Park.

AUBURN — Aimee Gleason and Heather Hopkins said they remember when one of the two living willow structures at Miles Lepak Permaculture Park in Auburn was just a series of holes in the ground.

The two living willow structures recently installed at the park were shown off at a ribbon cutting Tuesday. About 50 people came to the event. One of the structures is a three-dome piece with a willow culture in the middle and the second is a 4-foot maze with a willow sculpture. The Auburn Planning Department began working with the core group for the Auburn Permaculture Park on this effort about a year ago. Artist Bonnie Gale took inspiration from the feedback and ideas of community members for the structures.

Gleason and Hopkins volunteered to help install the projects back in July and said they were thrilled to see them bloom. Hopkins, who brought her daughters to the ribbon-cutting, was glad they were able to learn from volunteering.

"It's nice to see how it's grown," Hopkins said. "It came together, everybody worked hard."

Gale was among those who spoke to the crowd before the ribbon-cutting. She thanked the various people involved with the projects and everyone at the event.

Jeannie Tucker, a volunteer for the projects' installation and mother of park co-founder Peter Cramer, was thrilled about the projects.

"What kid isn't going to want to run through this?" Tucker said, pointing at the maze.

After the ribbon-cutting, children chased each other through the maze. Auburn Mayor Mike Quill, Auburn City Councilor Terry Cuddy and Cayuga Economic Development Agency Executive Director Tracy Verrier were among those present for the event.

Renee Jensen, senior planner for Auburn city government, said before the ribbon-cutting that since the park includes various edible plants and is different from a traditional neighborhood park, having these willow structures was more fitting than normal playground equipment. A total of $68,000 in Community Development Block Grant funding went toward the project. The city has received federal money from the U.S. Department of Housing and Urban Development for various endeavors over the decades.

Various educational seminars were held throughout the community, with different agencies such as the Booker T. Washington Community Center and Seymour Library involved. These seminars were held in December 2019 and early 2020. Various design meetings were scheduled for March, but they had to adjust their outreach due to the COVID-19 pandemic. Outreach packets became available and people sent in design ideas. Gale took all of those concepts into consideration and came up with her design, Jensen said.

"We had people submit ideas on mazes, actually quite a few mazes, and that's why we went the maze route," she said.

Initially, only one living willow structure was anticipated but based on community feedback, people's ideas were incorporated and two structures were settled upon. Thirty different community volunteers helped install the structures between July 21 and July 31.

The Skaneateles school district will keep all of its students at home Friday after a student tested positive for COVID-19.

Volunteers and city employees cut the ribbon to open the Miles Lepak Permaculture Park in Auburn on Tuesday evening.

The willow structures add to the landscape of the park.

A small gathering joined the opening of the Auburn Permaculture Park.