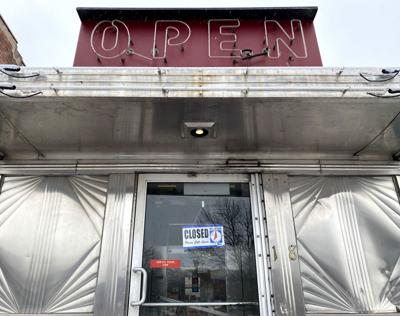 That's the day Bill Juhl drove his wife, Rachael Juhl, back to Auburn from Florida. She had spent the winter in Fort Myers, caring for her mother until she passed away at the end of February. Days after Rachael went down there, Bill lost his father.

Ever since the Juhls bought the iconic Auburn diner in 2011, Bill said, Rachael was the one who ran it. He drives a truck for UPS. But while she was away, he spent more time at the restaurant. The staff of 16 helped him along, even scheduling their own shifts. Despite everyone's best efforts, though, it was an exceptionally brutal winter for the business, Bill said. By the end of January, he had to close on Mondays and Tuesdays.

"We sunk everything we had to keep the diner going that winter," he said.

Still, as March began, he and Rachael could see light at the end of the tunnel. The business always rebounded in the spring, and she would be running it again. Driving back to Auburn on March 15, after all the losses they had endured, the Juhls hoped they could just return to normal.

Then, the next day, the Hunter Dinerant had to close.

Due to the coronavirus pandemic, Gov. Andrew Cuomo ordered the closure of every bar and restaurant in New York state except for takeout and delivery.

The light at the end of the Juhls' tunnel, as the saying goes, was an oncoming train.

They tried takeout for a few days. But the diner's business has traditionally come from within its steely, '50s-style walls, and that held true. It was only grossing $100 to $130 in takeout sales a day, Bill said. That doesn't even cover the payroll, let alone the cost of the food and other overhead.

For that reason, the Juhls announced on Sunday that they would close the Hunter Dinerant indefinitely the following day.

Below is a list of restaurants, bars and craft beverage producers in the Cayuga County area …

Speaking to The Citizen Tuesday, Bill said he's not sure what the future holds for the diner. Those 16 employees, even the core full-timers who've been there years, had to be let go. The Juhls could look into loans at the local, state or federal levels, but Bill doesn't have much faith in the process, he said.

If he and Rachael ride out the state's restaurant closure for a couple months, as it's predicted to last, Bill doesn't know if people will return to their old routines of dining out right afterward. He doesn't know if they ever will.

"I'd love to say that as soon as they give us the green light we'll be back up and running, but I just don't see us being successful doing that, with everyone still having fear about it," he said. "I don't know if it'll ever be the same."

If fear is on the side of the Juhls walking away from the Hunter Dinerant, love is on the side of them sticking with it. Bill and Rachael met there in 2005, when she was a waitress. And throughout their ownership, he said, the diner's employees and regular customers have become a big extended family to the Juhls. Many of them offered compassion and help while Rachael's mother was convalescing. Many just share the same affection for the diner. With its neon signage, railcar shell and riverside location, the restaurant occupies a space where time appears to have stood still since it was trucked there in 1951.

The restaurant also occupies a space in Auburn's heart, Bill said. That's why he and Rachael, if they were to walk away, would ask the city for help selling it. Bill would like to see the city take the same approach with the diner that it took with the Seymour Mansion on North Street, casting a wide net and helping award the property to the buyer who will take the best care of it. The Juhls completed a lot of work on the diner in their nine years of owning it, such as renovating its sign and repainting its front, and Bill would like to see that work continue.

"It's the city's diner, it never was really ours. We're just caretakers of it for the time being," he said. "The diner will be back, no matter who owns it. It will always be a part of Auburn."

'I've been waiting so long': Hunter Dinerant in Auburn reopens

AUBURN — Standing out from the November gloom on Wednesday morning was a sight unseen since March: The red neon letters of the Hunter Dinerant…

Gov. Andrew Cuomo's March 26 briefing on the state's monitoring of and response to the novel coronavirus epidemic.

The biggest star in our galaxy is about to die, here's what that means for Earth